Taking Broadcast Production on the Road 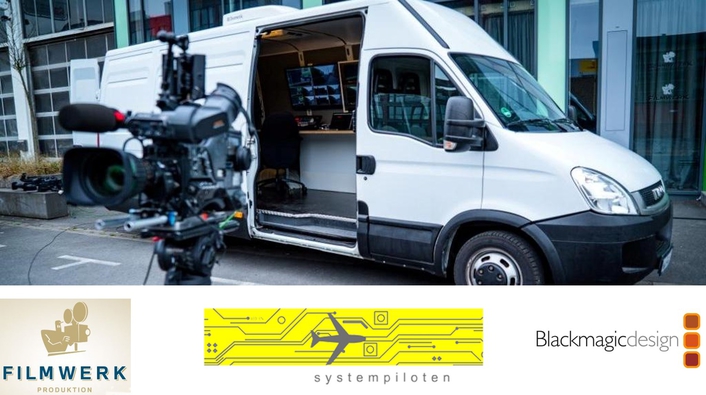 Cologne based Filmwerk has been a leading player in television, digital media, corporate and commercials for more two decades and has worked on some some of Germany’s most watched television programs, including “Supertalent” and “Kleines Wunder großes Glück.” With a team of more than 45 production professionals, Filmwerk has gained a reputation as one of Germany’s leading media production specialists.

Integral to that has been the company’s technical collaboration with systems integration partner, Systempiloten. Director, Thorsten Feldmann, undertakes an ongoing process of research and testing of the latest in video production workflows. “I refer to our work for Filmwerk as innovation scouting,” he reveals. “It’s our job to ensure that Filmwerk remains at the forefront of technical innovation in order for its production teams to have access to the very best creative workflows.”

With growing demand for multi-cam productions from its clients, the next step was for Filmwerk to develop a mobile offering. “Putting Filmwerk’s production capabilities on wheels was a logical development in expanding the production company’s services,” explains Thorsten. “So much of this work is location based, where space is quite often tight, so the practicality of being able to drive up to a set with a ready to production gallery was appealing.”

Flexibility was a key requirement for the outside broadcast (OB) SNG, as Filmwerk produces such a wide range of content; from commercials to live streaming to recording for episodic television series. Taking that into consideration, Thorsten was tasked with developing a multi purpose vehicle that could be adapted to manage both live-to-tape and live stream OB workflows. 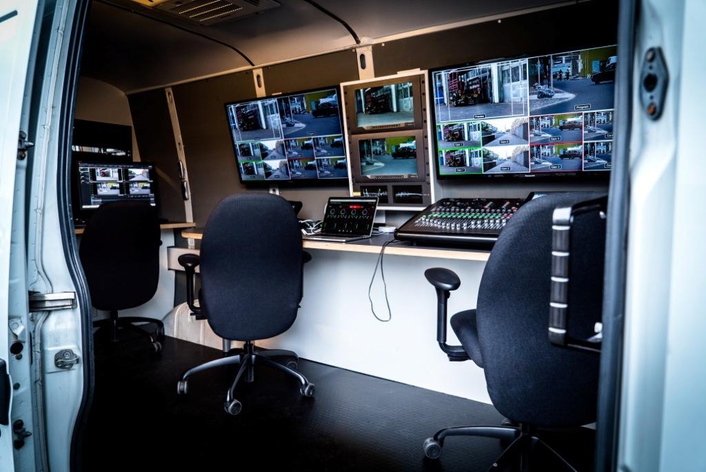 “Our goal was to deliver a solid, yet adaptable vehicle that would not only surpass the demands of Filmwerk’s current projects, but would also be a future proofed platform to assist the team in years to come. The majority of Filmwerk’s current projects are produced in HD, but of course, Ultra HD is already here, so it made sense to ensure the vehicle had this capability.” Nothing in the market existed with Filmwerk’s desired file based workflow, and so they opted to build their own solution.

Systempiloten had just three weeks to plan, specify and build the OB SNG van following the client’s brief. An IVECO Daily 35 was chosen as the housing vehicle. “It is large enough to accommodate a five strong production team, but it is still small enough that it can be driven into almost any location,” explains Thorsten. “We took a modular approach to the design, creating dedicated workspaces for the technical director, ingest operators and audio technicians.”

Having had a huge amount of previous success with Blackmagic Design, Thorsten was confident in basing the OB workflow on the same proven technologies. “Blackmagic hardware has formed the backbone on many client projects, and it has always proven itself to be highly reliable, and robust, even in the most demanding of circumstances.” 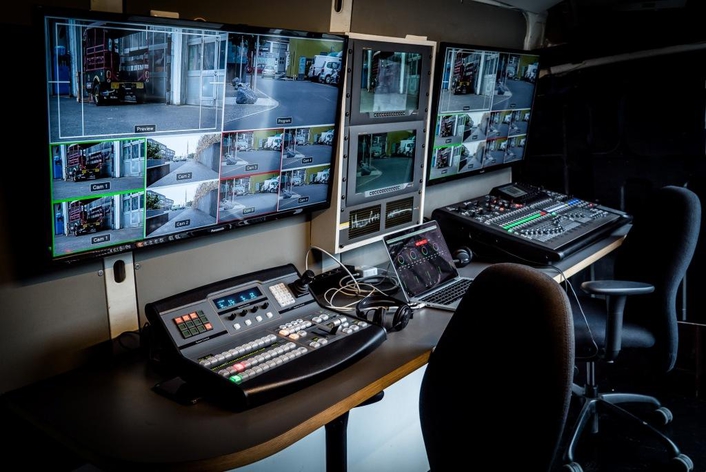 Designed based on a file based workflow, the goal was to allow Filmwerk’s production team to produce content with a live on tape workflow, where each ISO camera feed and program signal is recorded onto either one or multiple ingest servers, or a live production set up, where the program mix can be streamed directly from the van.

Currently the van is equipped with six Sony XDCAMs, however the solution is scalable and can handle up to a maximum of twelve when working on larger scale productions. Each camera is equipped with an ATEM Camera Converter, providing talkback and tally, and allowing Filmwerk to use optical fiber to send camera signals back to the OB, giving production teams the ability to set up over greater distances, without compromising on signal quality. A series of ATEM Studio Converters receive the optical fiber and convert back to SDI. 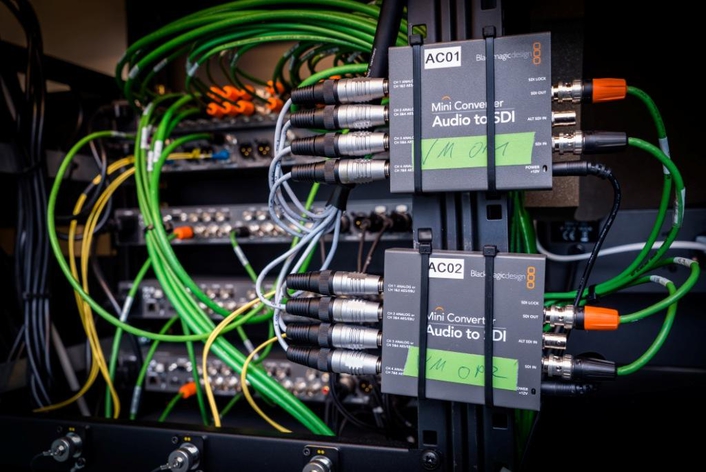 Thorsten explains that the van has been equipped with extensive preview monitoring to ensure that production values remain high at every stage of the workflow. “It’s not uncommon that we’ll move between locations on a job and so it’s important that we can get set up quickly and ensure that everything is consistent. So not only does the OB feature Blackmagic’s UltraScope’s on board, but also two large screens displaying a multiview output, providing the whole team an immediate view of everything that is happening.” 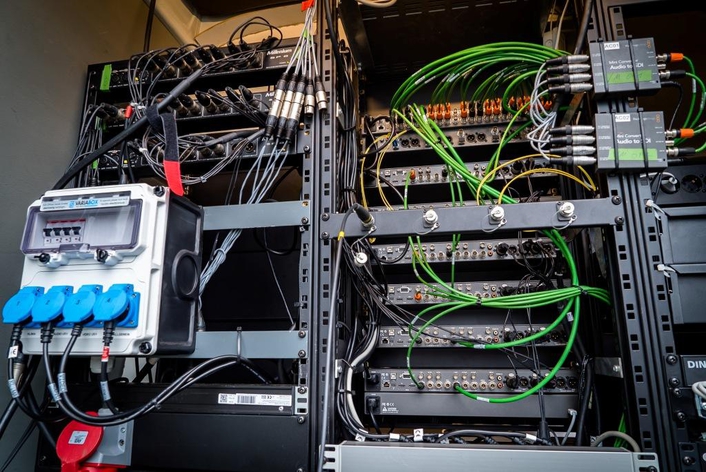 All of the video and audio signal distribution onboard is handled by a Smart Videohub 20x20 from Blackmagic Design, and distributed using the Videohub’s software control. The OB SNG handles both file based audio, as well as embedded audio in the SDI. 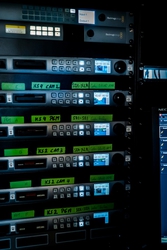 File based audio is mixed using the Behringer Midas X32 and recorded via IP to a 64-track Dante equipped multi-track audio recorder. The 8 channels of digital audio embedded in the SDI video signals are de-embed using a Mini Converter SDI to Audio 4K, mixed and routed over the Smart Videohub 20x20 matrix to the desired ingest channels.

“In terms of broadcast, it depends on the client’s requirements, but the OB SNG has six HyperDeck Studio Pro SSD broadcast decks on board, which act as back up recorders, and sit alongside the ingest server, while also offering the ability to encode and stream onboard. So it really can be configured to fit any production requirements,” explains Thorsten. “Filmwerk is also able to deliver in a number of industry standard codecs and formats, again, making certain the unit is flexible enough to adapt, regardless of the end-client or their needs.”

In order to offer that level of flexibility, the OB van has been equipped with a KA-Band satellite and with encoder. Not only does this offer an upload bandwidth of up to 10 m/bits, and the same again down-stream, but it can also be used as a WLAN hotspot when on location. The OB SNG also features TVU’s wireless LTE uplink solution, housed in a backpack, providing dual transmission encoding whilst roaming on location. 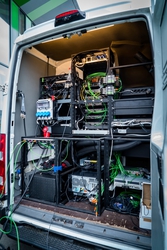 Filmwerk will look to develop its Ultra HD productions in the short term future, and as all of the Blackmagic infrastructure on board is able to handle formats up to Ultra HD 4K, Thorsten is confident the van will not only be a central element of Filmwerk’s production workload, but will also form a blueprint for other production companies across Europe to follow.

“The majority of European production houses are having to balance ever tightening budgets with extremely high production values and need for flexible, cutting edge workflows. With the advent of simpler, file based workflows, we’ve been able to implement best practice from live OB and combine this with broadcast quality video workflows, to deliver a highly effective and multipurpose SNG solution that can be adapted in minutes,” he concludes. “Flexibility will continue to be a decisive factor in production, and those companies who take stock now to ensure they are fast enough to adapt will be the ones reaping success in years to come.”

A groundbreaking look at the drama and emotion of a German maternity unit, from the perspective of the parents-to-be and maternity ward staff, Filmwerk has been involved in the production of this observational documentary series for the last three years.

Filming of the series, which is produced by Saga Media, a Cologne based production company, takes place at the Südstadt Rostock University teaching hospital. Unable to rig up a temporary studio space inside the hospital, Saga Media brought in Filmwerk to supply a OB SNG solution in order to provide all of the studio facilities necessary to deliver the the four month long production. 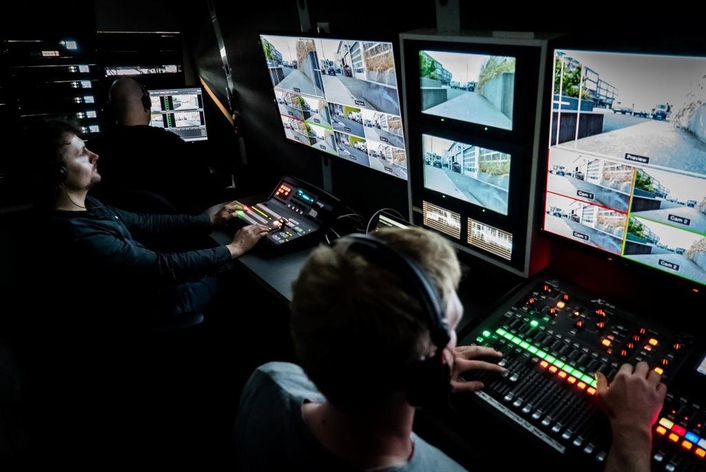 The ability to provide a fully equipped television studio on location was an essential component in successfully producing the series, particularly with production crews requiring an unobtrusive, round the clock presence on site in order to capture the story of each birth as it unfolds. “With our OB SNG solution, we were able to offer the customer a state of the art, studio based workflow, on site at the hospital. This meant that multitrack sound and camera rushes could all be acquired and cut on location, quickly and efficiently,” explains Dirk Wojcik Geschäftsführer, CEO of Filmwerk. 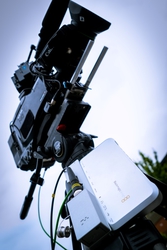