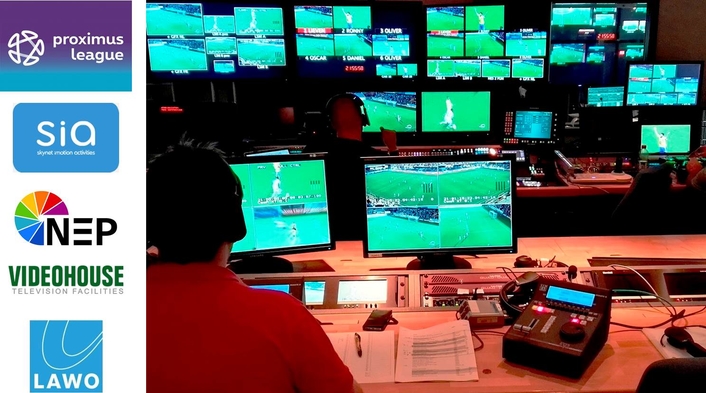 Belgium’s second football division, the Proximus League, has provided greater results than the action on its pitches immediately suggests. Away from the field of play, a groundbreaking technical solution is helping pave the way for a new sports broadcast

Behind the project are Proximus group production company Skynet iMotion Activities (SiA), Videohouse Media Facilities, NEP Belgium and German technology pioneer, Lawo. With Proximus providing the network and SiA the TV facilities, NEP brings the technology and know-how from some of the worlds’ largest live and broadcast events from around the globe, and is one of the leading worldwide providers of outsourced production solutions. For its part, Videohouse is the only full service provider in Belgium offering a full range of audiovisual and multimedia facilities, both nationally and internationally. And it is Lawo’s IP Remote technology that is the key to the systems that make it all possible.

“At the start of the season, my MD told me that the good news is that we have the rights for the Proximus league for the next years – the problem is that we have to do 50 per cent more matches but without any more money,” explains SiA’s Manager of Media Handling & Facilities, Rodrigo Sternberg, terming it “a very concrete business problem”. 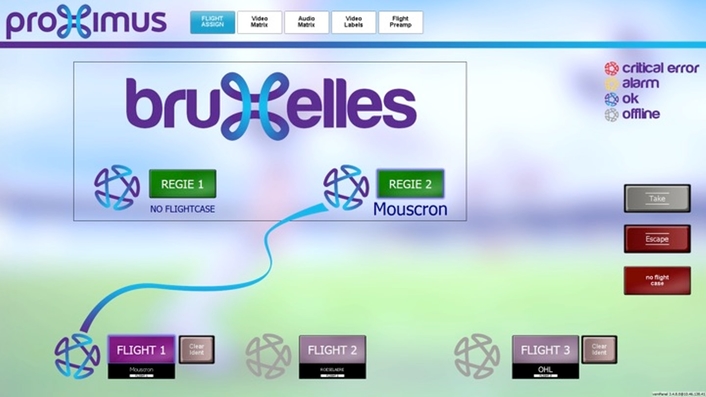 With a drop in quality an unacceptable means of stretching the budget, Sternberg focused on efficiencies in the broadcast crew and equipment. It seemed clear from the earliest stages that an IP solution was the way forward and, although SiA had conducted a number of its own trials, tried-and-trusted partners Videohouse Media Facilities, Lawo and NEP were brought in for their expertise and experience.

The requirement is to broadcast four games each week over the 30-week plating season – a total of 120 games from eight stadia. The project’s “kick-off” meeting took place on 14 June 2016, with the first systems operating by 16 July. The first broadcast match was on 5 August.

It took SiA just two months to guide the development of the solution, covering matches at eight stadia across Belgium. The result is a reliable and cost-efficient alternative to deploying a “traditional” OB team and setting up remote broadcasting facilities. At the venue, a camera crew of six are accompanied by a single sound installation technician and one video installation technician. Together, they originate the video content for a dual-language Dutch-French commentary.

The set-up travels in three flightcases around the country to connect all cameras, microphones and comms in the stadia to the IP infrastructure in two MCRs at SiA’s facilities in Brussels. The systems are capable of providing all pictures and simultaneously handling matches in both languages.

“Remote Production gives a lot of new opportunities for broadcasters,” says Videohouse Belgium MD, Dirk Theunis. “It is challenging in many ways: technically the most important ones are the reliable IP-connection, encoding with the lowest delay and a well-designed communication system between the local crew in the control room and the remote crew in the stadium. To solve all these issues, we – NEP and Videohouse – teamed up with Proximus and Lawo. The experienced crew did the rest…”

Prior to the Proximus project, Lawo had provided the technology used to link all the stadia in France ahead of the Euro 2016 championships. “We used an IP network that was based on dark fibre,” explains Lawo Technical Sales Manager, Dirk Sykora. “It provided very high quality network connections and used a massive fibre backbone. We had the challenge of making a full production – all audio and video – over a single 1GB connection, and it was on a shared network.”

As with the setup in France, Lawo’s V_remote4 video and audio signal transport solution was one of the keys. Natively able to provide processing in WAN-based remote production, it sits at the heart of the SiA/Promixus project, supporting a bi-directional setup, transferring to and for the stadium.

Proximus has provided 1GB networks in every stadium, which are used as primary and back-up connections to the network chain and the switches located in the Brussels MCRs. As well as the audio signals, there are a total of eight video signals going from the both galleries to the MCRs in Brussels, and eight returns. “Using the same boxes, we send back the programme return for the camera people as well as the video used at the commentary positions,” says Sykora. 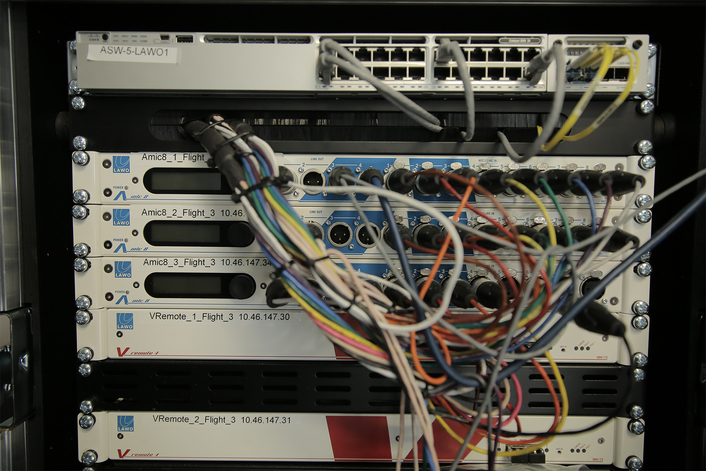 Everything is received in Brussels by existing control rooms and MCRs, with the infrastructure operating as usual – maintaining consistency for those working in Brussels.

Each of the MCRs “owns” two Lawo V__remote4 units to interface with the football stadia. Either MCR can be connected to any football stadium using VSM panels, which takes care of all the video and audio routing inside the MCR and setting up audio and video streams between Brussels and the stadia.

From each flightcase, eight camera streams are sent to Brussels, and two returns are received; 32 audio channels are sent to the MCR, and 16 audio channels are received from Brussels. Lawo’s VSM Broadcast Control and Monitoring System controls all devices both in Brussels and in the flightcases, among these are two Lawo mc²56 audio production consoles, a Miranda multiviewer system, Kahuna vision mixers and all V__remote4 units, as well as A__line boxes in the flightcases.

The control and the management of the complete IP-based production infrastructure is secured by the VSM System, which plays an essential role in the setup, controlling not only the respective hardware but also the streams and bandwidth. The whole system is configured as an “auto recover”, which means that every time a flightcase is connected to the network and to the studio, certain parameters are being set automatically. Whenever units are lost in the MCR in Brussels, e.g. A/V, the routing is automatically swapped in the router’s client to keep the connection through other devices and using other streams. Using the “auto recover” mode within the network, setting up the flightcases and connecting them to the MCR becomes easy and fast. Another important result of using this method is failsafe connection and stream distribution.

“The beauty is that the complexity is managed,” Sykora observes. “We have a single solution handling tally, camera control, audio control, video, connections and monitoring…”

“On the gallery side, we had a close look with a view to finding a more efficient way to produce,” Sternberg says, moving on to the broadcast crew. “The result of these deliberations was a five-person team – a director who does the switching; an EVS operator; a technician who works with the technician on the field; a sound engineer who works with the audio technician on the field; and then a senior engineer who takes care of connecting the games to the galleries. We have two galleries running the system, and when the first gallery is on-air with the production crew he starts testing the second game that will go on after the first game. As a result, the same gallery team can produce a second game.”

SiA’s core activity is football production for TV, as well as providing VoD and TV channel playout available exclusively to Proximus customers. The sports project has been a huge success for the broadcaster and its partners. “It has worked very well,” Sternberg agrees, with particular reference to having connected, configured and made the system work at eight stadia in a just two months. 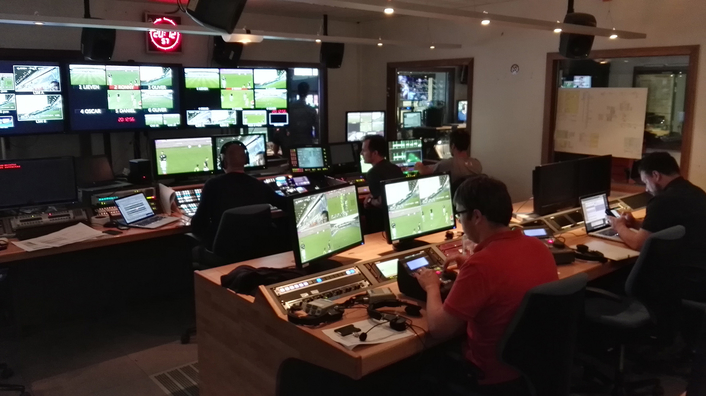 “IP Remote Production definitely will be the future of broadcasting in a certain production segment,” says NEP Belgium MD, Timo Koch. “As the worldwide leader in sports production, NEP supports its clients in whichever format is appropriate for their specific production. In partnership with Lawo, we deploy the best technology to deliver these football matches.”

“We are incredibly proud of the fantastic achievement of the joint team – two months from start to live is just amazing,’ says Skynet Motion Activities MD, Massimo D’Amario. “The IP Remote Production technology used here is an example of how Proximus and SiA leverage innovative technologies to better serve Proximus customers. The technology enables Proximus and SiA to optimise the full production cycle of the live games. It also provides higher value productions thanks to a higher use of fixed assets and synergies in production crews. We are proud of what we have achieved for the Proximus League and are looking to extend it to the Jupiler Pro League, Belgium’s first division football competition.”

Accordingly, Lawo is regarding the present implementation of this remote IP broadcast model as proven but “small”. The aim now is to extend it to a “large” model, which Sykora reports as having been tested.

“We were told that it would never work or that it would take years, but today we already have a set of stadia and a central site,” he says. “If more people join, we can have better and richer collaboration and make programmes possible where before it was not possible to do so.”