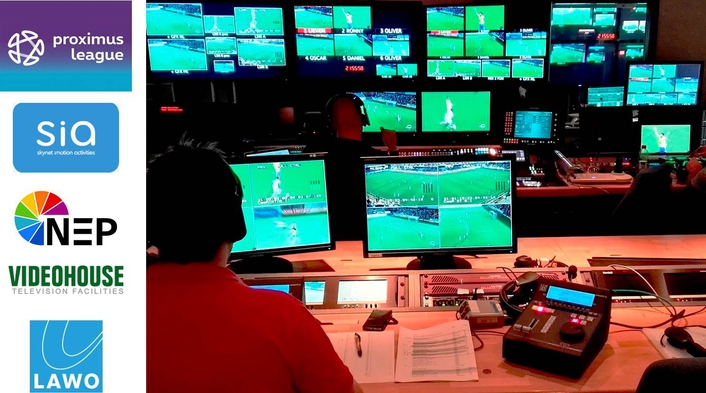 SiA, the production company of the Proximus group, selected Lawo’s solution to deliver its IP Remote Production infrastructure. To realize the project, SiA, Proximus, Lawo, NEP Belgium and Videohouse established a joint ‘dream team’. With Proximus delivering the best network, Lawo the IP Remote technology, SIA its TV facilities and NEP Belgium & Videohouse the expertise on the field. This is the first time the technology is deployed on such a scale for a football competition in Belgium.

Massimo D’Amario, Managing Director of Skynet iMotion Activities: “We are incredibly proud of the fantastic achievement of the joint team. Two months from start to live is just amazing. The IP Remote Production technology utilized here is an example of how Proximus and SiA leverage innovative technologies to better serve Proximus customers. The technology enables Proximus and SiA to optimize the full production cycle of the live games. It also provides higher value productions thanks to a higher utilization of fixed assets and synergies in production crews. We are proud of what we have achieved for the Proximus League and are looking to extend it to the Jupiler Pro League, Belgium’s first division football competition.” 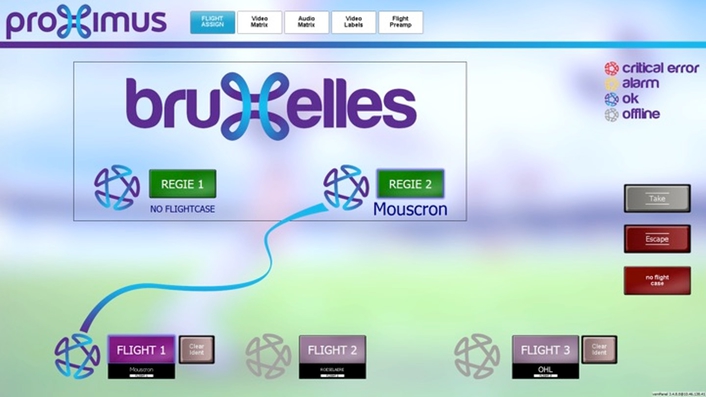 Timo Koch, Managing Director of NEP Belgium: “NEP Belgium is proud to be the long-term partner of SiA / Proximus to deliver this new technology for the coverage of the Proximus Football League. IP Remote Production definitely will be the future of broadcasting in a certain production segment. As the worldwide leader in sports production, NEP supports its clients in whichever format is appropriate for their specific production. In partnership with Lawo, we deploy the best technology to deliver these football matches.”

Dirk Theunis, Managing Director of Videohouse Belgium: “Remote Production gives a lot of new opportunities for broadcasters. It is challenging in many ways: technically the most important ones are the reliable IP-connection, encoding with the lowest delay and a well-designed communication system between the local crew in the control room and the remote crew in the stadium. To solve all these issues, we - NEP and Videohouse - teamed up with Proximus and Lawo. The experienced crew did the rest…“

With the use of Lawo’s sophisticated and future-proof Remote IP Technology, Belgium Telecom Provider Proximus starts broadcasting all games of the Proximus League, Belgium’s 2nd Football League. Started in August, all football matches are transmitted live using the Lawo infrastructure. The setup comprises three flight cases that travel around the country to connect all cameras, microphones and commentary boxes in the stadia with the Remote IP Production infrastructure in two MCRs in Brussels. They are capable of producing two matches simultaneously in two languages. With the combination of several V__remote4 that connect to the stadiums, Lawo Nova73 audio routers and the use of Lawo’s powerful VSM Broadcast Control and Monitoring System, Proximus produces high-class content with the most advanced and flexible IP Remote Production setup in Belgium. With this installation, Lawo once again proves that with their IP innovations tomorrow's visions can already be realized today. 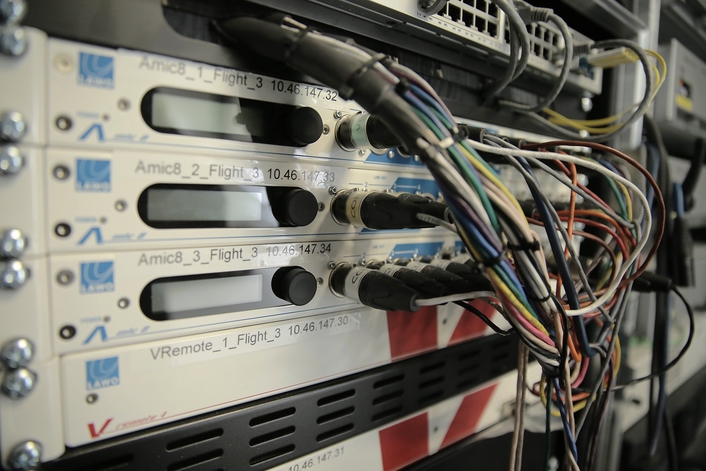 To ensure fail-safe operation in a live production situation, the IP Remote Production setup makes use of a combination of the latest network, IP and control innovations from Lawo. The two MCRs in Brussels and the flight cases located in the stadia interconnect via a network connection provided by Proximus. The control and the management of the complete IP-based production infrastructure is secured by the VSM System.

Each of the MCRs owns two V__remote4 to interconnect to the football stadiums which totals 4 V__remote4. Every MCR can be connected to any football stadium using VSM panels. VSM takes care of all the video and audio routing inside the MCR and setting up audio and video streams between Brussels and the stadia. The SDI signals from all V__remote4 in Brussels are connected to the video router whereas the MADI signals from the V__remote4 are connected to the Nova73 audio router, installed in Brussels. At the other end, the three flight cases consist of two V__remote4, connected to a Cisco switch in the case and three A__line Audio-to-IP interfaces. The camera streams between the stage boxes and the MCR are sent using J2K. With each flight case, eight camera streams are sent to Brussels, two returns are received, 32 audio channels are sent to the MCR, and 16 audio channels are received from Brussels. Lawo’s VSM Broadcast Control and Monitoring System controls all devices both in Brussels and in the flight cases, among them: two Lawo mc256 audio consoles, a Miranda multiviewer system, Kahuna vision mixers and all V__remote4 as well as A__line boxes in the flight case.

In order to handle the amount of content, Proximus provides 1GB network connections in every stadium with QoS. Locally in Brussels, these network connections are received with a main and backup 10GB trunk between the “Stadium” network chain and the switches in the MCR. 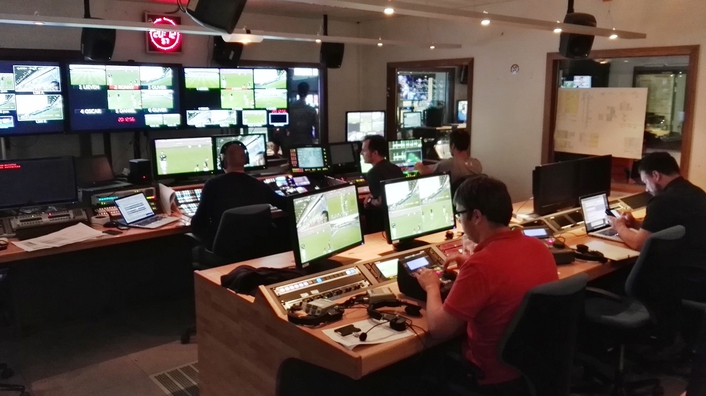 The VSM system takes over a very important role in this setup. The VSM not only controls the respective hardware in use but also controls the streams and bandwidth. The whole system is configured as “auto recover”, which means that every time a flightcase is connected to the network and to the studio, certain parameters are being set automatically. Whenever units are lost in the MCR in Brussels, e.g. A/V, the routing is automatically swapped in the router’s client to keep the connection through other devices and using other streams. Using the “auto recover” mode within the network, setting up the flight cases and connecting them to the MCR becomes easy and fast. Another important result of using this method is to provide a failsafe connection and stream distribution.

Proximus (Euronext Brussels: PROX) is the leading provider of telephony, internet, television and network-based ICT services in Belgium through its Proximus and Scarlet brands. Proximus’ aim is to deliver the best customer experience and to simplify the customer journey by offering accessible and easy-to-use solutions to the residential, enterprise and public markets. Proximus’ high-quality interconnected fixed and mobile networks offer access anywhere and anytime to digital services and data, as well as to a broad offering of multimedia content. Proximus is active in Luxembourg through its affiliates Telindus Luxembourg and Tango, and in the Netherlands through Telindus Netherlands. Its subsidiary BICS offers best-in-class international wholesale solutions for voice and mobile data service providers worldwide. At the end of 2015, Proximus had around 14,000 employees and generated an underlying Group revenue of EUR 5,994 million.

NEP provides the technology and know-how to enable clients to produce the worlds’ biggest live and broadcast events around the globe. The company is the leading worldwide provider of outsourced production solutions offering technical services for Remote Production, studio production, video display, host broadcasting, post production, smart asset / media management, multi-screen delivery and end-to-end OTT solutions. NEP’s team of more than 2,000 employees is driven by passion and a focus on technical innovation, and together they have supported productions in over 65 countries on all seven continents. NEP is headquartered in the United States and has operations in 16 counties and the ability to service clients worldwide.

Videohouse is the only full service provider in Belgium offering the full range of audiovisual and multimedia facilities, both nationally and internationally. Combining over 30 years of experience, a passion for the profession and a high degree of flexibility makes us the ideal partner for broadcasters, producers and business. Videohouse is part of Euro Media Group, leading player in the European broadcast facilities market, with a presence in more than 7 countries (Belgium, France, Germany, Italy, The Netherlands, Switzerland and the United Kingdom).