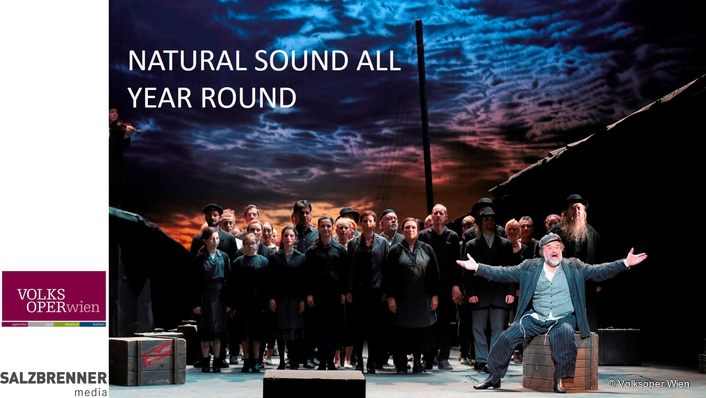 Built in a mere ten months and inaugurated in 1898, the Vienna Volksoper is the Austrian capital’s other prestigious opera house. It is what Austrians like to call a “repertory theatre”, i.e. a venue that stages opera, operetta, ballet, and musical comedy productions—around 300 shows each season (September through June).

It has over 500 employees, among them an in-house orchestra, a choir, and a seven-strong audio department. Impressive though that may sound, ten-hour days are the rule for the audio engineers, and there are only a few exceptions. While opera and classic operetta productions are performed without any sound reinforcement, apart from occasional thunder, doorbell and other effects, musical comedies rely heavily on the venue’s digital audio system—without anybody noticing. How is this possible?

“Our aim is to make our sound reinforcement unobtrusive,” explains Andreas Hendler, assistant manager of Volksoper’s Acoustic and Multimedia department. “We want the sound to remain perfectly natural, only louder in places where there is a danger of some parts being drowned out by the orchestra, for example.” So far, so good, but hiding the front-of-house and other point-source speakers from the audience’s view doesn’t solve the problem of a soundscape lacking depth. After all, a perfectly natural acoustic experience also means that artists standing at the back sound further away, reducing their levels while adding more reverb simply doesn’t do this.

This is precisely why the audio engineers at the Vienna Volksoper have become masters at “playing” with the Haas effect, i.e. the fact that the sound that reaches the listener’s ear first determines its perceived spatial location. The amplified sound is delayed by a maximum of 20 milliseconds to ensure that the acoustic sound arrives before the singer’s voice is heard from the speaker system. 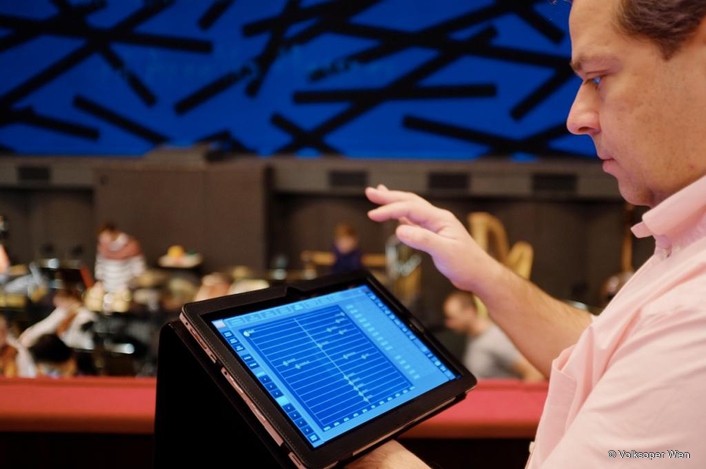 No Spoilers, Please
Another trick that has won the audio team quite a few pats on the back from the likes of Steven Sondheim, is that Andreas Hendler and the head of department, Martin Lukesch, discovered that what really makes an amplified vocal signal sound “amplified”—and hence less natural—is the pronounced 10kHz boost of most wireless headset or ear-worn microphones. This causes sibilants to jump out of the speakers rather than the artists’ mouths. Understandable though this boost may be because of the microphones’ less-than-ideal placement in most instances, the audio engineers at the Vienna Volksoper have developed a way of equalising microphone signals in such a way that they appear to be the product of the singers’ voices and the venue’s acoustics.

It all Began with a Track Ball
When the Vienna Volksoper decided it was time for a new mixing console in 2002, it purchased two SALZBRENNER C.A.S. Mix consoles and a number of STAGE TEC Nexus Base Devices to provide the required ins and outs throughout the venue. Ten years later, the venue decided the consoles were nearing the end of their lifecycle and began dreaming about new ones.

The C.A.S. Mix consoles were equipped with trackballs, and most audio engineers at the Vienna Volksoper quickly discovered how much time this saved them in their daily routine. As smartphones were becoming increasingly popular, the team put two and two together and asked SALZBRENNER media if there were any plans for a touchscreen-based digital console that did away with the limitations of other digital desks and would also enable them to save and recall parameter settings selectively. There were indeed such plans, and so the Vienna Volksoper ordered two POLARIS touch consoles.

Based on their experience with the trackball and their enthusiasm for WYSIWYG user interfaces, they provided the SALZBRENNER media team with invaluable ideas and solutions for streamlined live operation and were one of the first clients to receive their desks, which they connected to their existing Nexus infrastructure. “Working with POLARIS touch is more than three times faster than operating a conventional digital desk,” explains Andreas Hendler.

Inside the Box is Outside the Box
The purchase of the trackball-equipped consoles in 2002 coincided with the construction of a new control room, designed by the Austrian acoustician Peter Willensdorfer. Despite being a separate room, the sound the audio engineers hear is identical to what the 1,300-strong audience experiences in the hall.
This impression is further enhanced by the fact that the consoles are not facing the stage but rather perpendicular to it, with the two POLARIS touch consoles set up in such a way that the engineers can work back to back.

Two audio engineers? Yes, for musical comedy productions, that is how the Vienna Volksoper works: one engineer is in charge of the voices (one console), while the other mixes the orchestra, controls sound effects and cues (second console) and communicates with the engineers on stage when there is an issue with one of the 34 wireless channels. 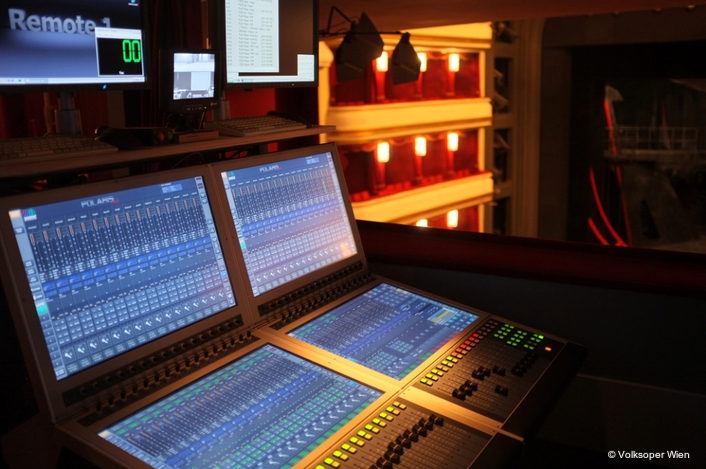 Polaris in the Volksoper Vienna

A Day in the Life…
The Vienna Volksoper’s busy schedule is only manageable because the stage set is dismantled every night to make room for rehearsals in the morning before the set for the next show is put in place. On most nights, the show differs from the one before it and the one following it. “The Sound of Music” on Tuesday night, for instance, may be followed by “Anatevka” on Wednesday, “The Wizard of Oz” on Thursday and “Così fan Tutte” on Friday. This requires flexible digital consoles, a powerful QLab system as well as digital media servers and MIDI-controllable outboard gear. Each POLARIS touch cue transmits a MIDI message to the QLab system, which then sends MIDI program changes in all directions as and when needed. That way, the entire soundscape can be changed in a split second.

New productions are prepared in a matter weeks, and wireless microphones come into play at the third or fourth piano rehearsal—singers who will be wearing hats, caps, etc., during the show have to put on “rehearsal hats” to allow the sound engineers to find the best spot for their wireless microphones.
What about the cue list? This is prepared offline at first, which takes two to three days, and is based on what the audio engineer believes will work best for the production. There are usually several alternatives to try out different approaches without keeping everybody waiting.

In addition, the “Anatevka” production uses a choir in the choir room to support the chorus on stage, which requires additional microphones.
Despite all the automation options available to the audio team, the singers are still tracked manually—by the audio engineer in charge of the voices. Andreas Hendler, who usually works in tandem with Martin Lukesch, admits that keeping the voices audible and intelligible can be quite stressful at times, especially when there are a lot of singers on stage. This poses two kinds of challenge: singers facing each other may create a comb filter effect, which needs to be corrected either by lowering a fader or by explaining that the singers should avoid direct line-of-sight positions on stage; and short passages sung by several artists need to be kept in balance and perfectly audible throughout without missing so much as a syllable.
And they all need to sound natural, of course… 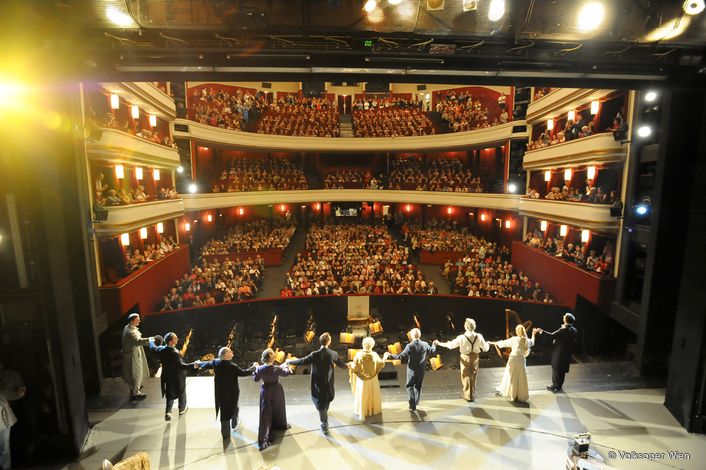