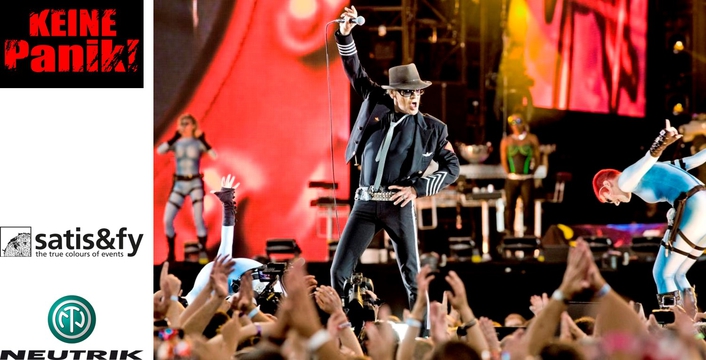 German rock titan Udo Lindenberg has started his “Keine Panik!” (“Don’t panic!”) 2016 German tour. Fans love the 70-year-old chart topper. More than half a million people have attended his concerts in the past three years, and in 2016 the stadiums and halls are packed again! It was not surprising that, in the run-up to the tour, an additional concert had to be scheduled at almost every venue. satis&fy, leading international provider of cutting-edge event, media technology and scenic design solutions from Karben near Frankfurt am Main, Germany, was responsible for the sound on Udo Lindenberg’s “Keine Panik! Tour 2016.” The company is international in scope, employing over 500 people. satis&fy’s fleet of vehicles and store of materials is one of the biggest and most up to date of German live event companies.

To keep on top of state-of-the-art technology, satis&fy and the freelance sound engineer Arnd Wagner tested the new wireless solution XIRIUM PRO from Neutrik. The test took place during two concerts in June 2016 in the TUI Arena in Hannover, Germany. The arena holds up to 14,000 spectators.

Neutrik’s new professional wireless system XIRIUM PRO is based on Neutrik’s DiWA (Digital Wireless Audio) technology, offering sample-accurate operation in the license-free 5 GHz ISM band. The 5 GHz band offers DiWA ample bandwidth to transmit excellent, uncompressed audio (24 bit / 48 kHz) of such high quality as to bear comparison with wired cable transmission over distances of greater than 500 meters from one transmitter to an unlimited number of receivers (point-to-multiple-point). Even with high RF traffic, Neutrik’s DiWA protocol guarantees uninterrupted data transmission. XIRIUM PRO provides great flexibility by offering two different base units (TX and RX) that accommodate a combination of different input and output audio modules. There are modules for analog (line-level), digital (AES/EBU), and DANTE audio signals. Additionally, a repeater module is offered for the RX base stations. The modules can be flexibly combined, transparently and automatically converting amongst the various audio signal types. 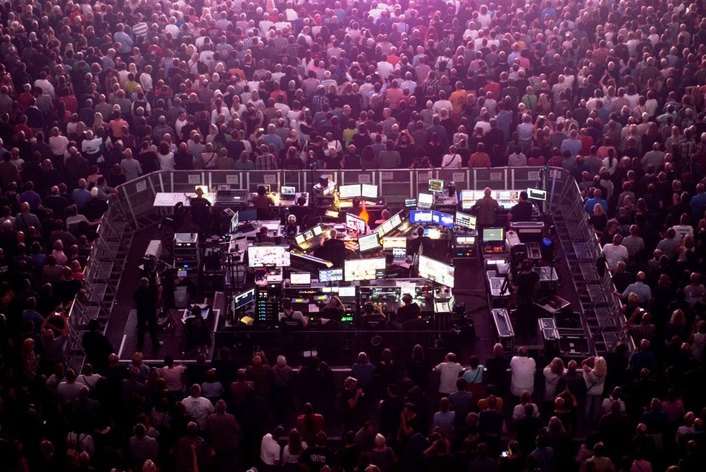 Sound engineer Arnd Wagner has accompanied Udo Lindenberg on his tours, together with satis&fy, since 2008. On the first tour in 2008, Arnd filled in for a sound engineer who was unable to make the job. He has been part of the team ever since. Even though Udo Lindenberg was already a superstar eight years ago, everything about his tours was smaller back then. In 2008, when Udo Lindenberg also gave a concert in the Hannover TUI Arena, the tour equipment fit into eight trailers. This year, the technical team arrived in Hannover with 22 trailers. Three of them are filled with the stage, which is shipped from one venue to the next. Another two trailers are packed with satis&fy’s PA equipment. On the “Keine Panik!” tour, the event company exclusively uses loudspeakers from L-Acoustics. The maximum setup, as used in Stuttgart and Gelsenkirchen, comprises 56 K1 and 110 K2 speakers. In Hannover, the setup comprised 40 K1 and 36 K2 speakers. Such professional audio equipment requires a perfect audio signal – something which cannot be achieved with bandwidth-limited UHF systems. By contrast, XIRIUM PRO offers audio quality like a cable, with 24 bit / 48kHz sampling and a flat frequency response. 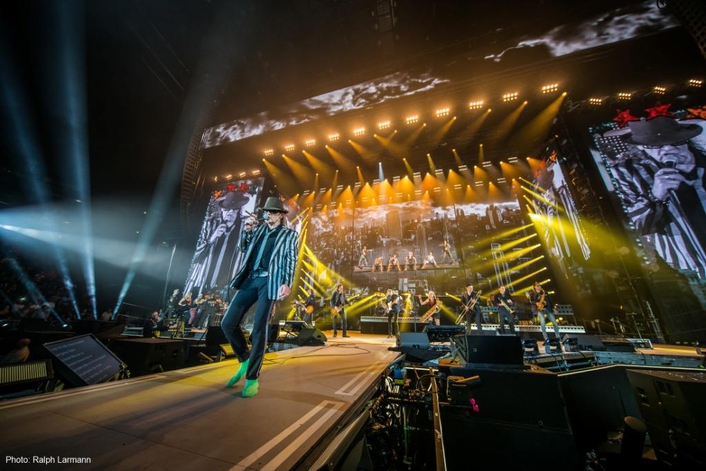 In stadiums, setting up the sound equipment for maximum impact and quality at the upper tiers is difficult. Unlike in outdoor events, using very tall speaker towers is inevitably limited by the venue’s roof: stadium ceilings are designed to transfer the sounds of the upper tiers’ screaming and jubilant sports fans down to the other fans and the sports team. Of course, such acoustic transfer is counterproductive for concerts. In order to achieve proper sound absorption in the upper tiers, the speakers have to “reach” into the upper tier area as far as possible, with maximum focus, in order to reduce slapback. That’s why satis&fy uses, in addition to three line arrays on each of both longitudinal sides, two additional line arrays aimed specifically at the upper tiers, providing the best possible sound experience there. To control these amps, Ethernet cables are installed. Using IP tunneling integrated into Riedel RockNet, the control data is transferred to the amps. The IP tunneling offers only 10 Mbit transmission speed, but that is sufficient for the control data. In big stadiums, satis&fy dedicates 40 amplifiers just to the sound in the upper tiers, with all 40 amps supplied both control data and audio via a RockNet loop. However, in Hannover, the RockNet loop was used for the control data and as a redundant audio source. XIRIUM PRO was deployed as the primary audio source. 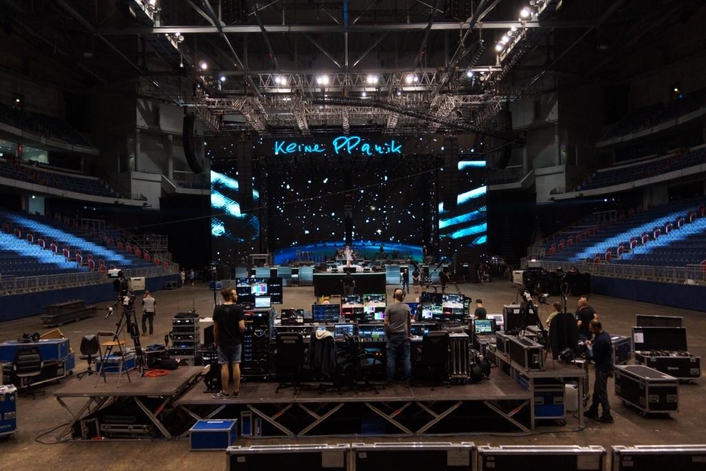 Complicating matters, Udo Lindenberg flies through stadiums and halls with a spider system during his concerts. So, preferably, no cables should come down from the towers at any points. All cables must be dressed back and away from the towers – a very cumbersome process. In such cases, a wireless system like XIRIUM PRO from Neutrik offers serious relief. 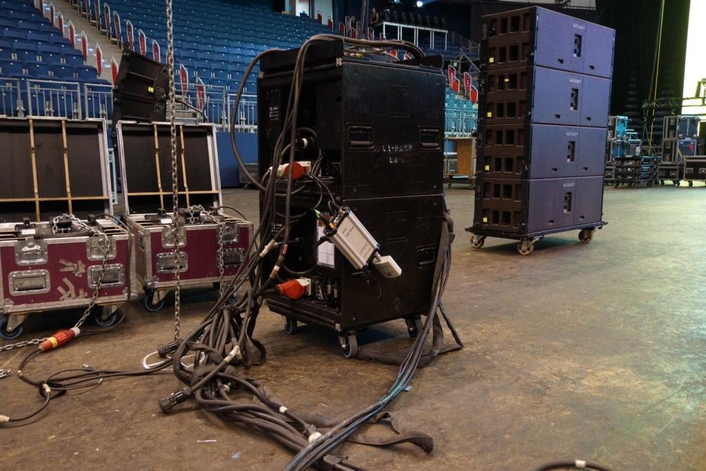 XIRIUM PRO was not completely new for Arnd as he already worked with the product’s predecessors. In collaboration with Neutrik support, Arnd planned the system configuration the day before the first concert in Hannover. On the day of the concert, XIRIUM PRO setup was completed in just a few moments, showing its strength as a plug-and-play system. One XIRIUM PRO receiver was mounted to each of the two amp racks with a ManfrottoTM universal mounting clamp (which is included in the scope of XIRIUM PRO delivery). The exchangeable modules offer 10 hours of battery life, but since power was supplied onsite, the devices were powered with mains power simply by using powerCON TRUE1 equipped cables. After installation was completed, the racks and delay towers were flown up to the stadium ceiling. Once this was done, the XIRIUM PRO receivers were no longer accessible. Therefore, the directional antennas (40° H / 35° V) were properly angled towards the XIRIUM PRO transmitting unit before the rig was flown. 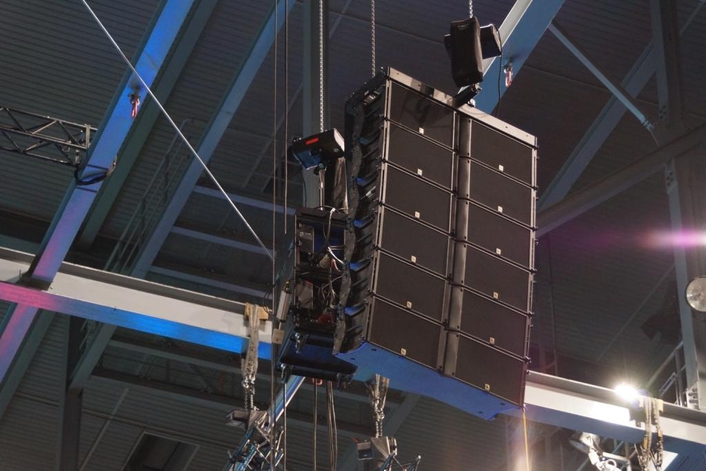 The transmitter itself and one repeater unit were placed directly at the FOH position. As the receivers were located up so high, the sender and repeater units had to be mounted slightly angled on speaker stands to align to the two receivers at the ceiling. The repeater was used to create a redundant transmission line – what Neutrik calls “extended true diversity”. The repeater sends the signal, minimally time shifted, on an independent RF path. Such a diversity solution is a combination of time and room/space diversity, avoiding reflection-based phase cancellations and exceeding the effectiveness of even full diversity systems. Each receiver automatically selects the best signal, switching between the transmitter and repeater signals without interruption. 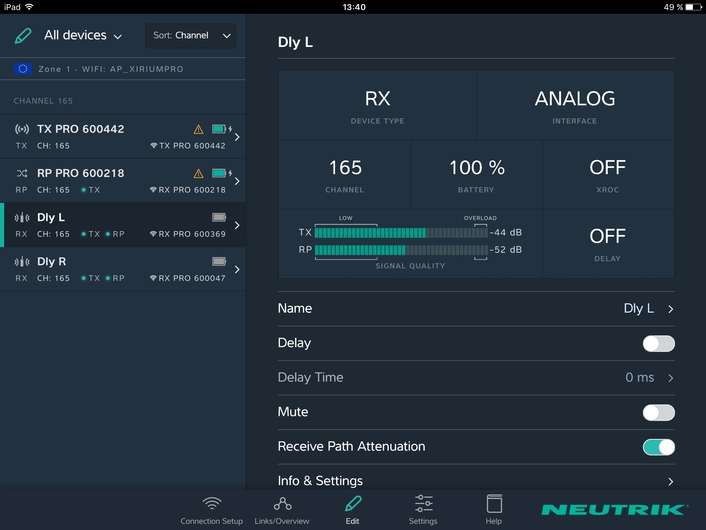 The XIRIUM PRO app shows the quality of the transmitted wireless signal in the TUI Arena in Hannover. The two bars show the RSSI level (Received Signal Strength Indicator).

The transmitter itself and one repeater unit were placed directly at the FOH position. As the receivers were located up so high, the sender and repeater units had to be mounted slightly angled on speaker stands to align to the two receivers at the ceiling. The repeater was used to create a redundant transmission line – what Neutrik calls “extended true diversity”. The repeater sends the signal, minimally time shifted, on an independent RF path. Such a diversity solution is a combination of time and room/space diversity, avoiding reflection-based phase cancellations and exceeding the effectiveness of even full diversity systems. Each receiver automatically selects the best signal, switching between the transmitter and repeater signals without interruption. 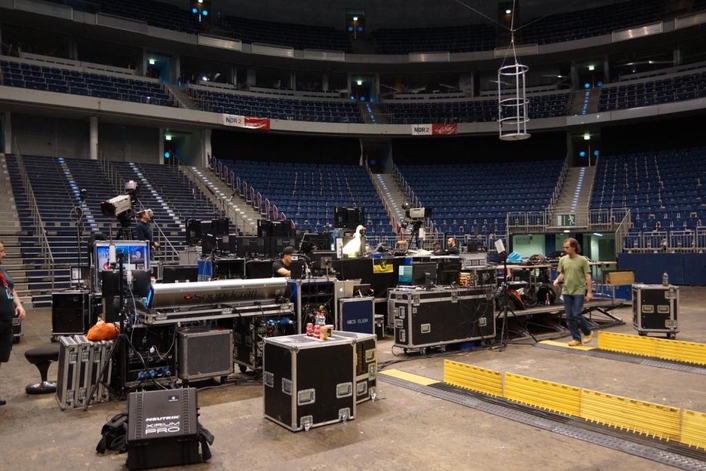 XIRIUM PRO is designed for static point-to-multiple-point wireless audio installations. The app can be seen as a game changer for such a controlled setup: offering more than control, it makes wireless audio transmission predictable. The software makes it a breeze to optimize aerial alignment and determine the location of the repeater. It also facilitates the setting of all function parameters (e.g. delay time, XROC mode, etc.) as well as monitoring (e.g. signal strength, battery power, etc.). 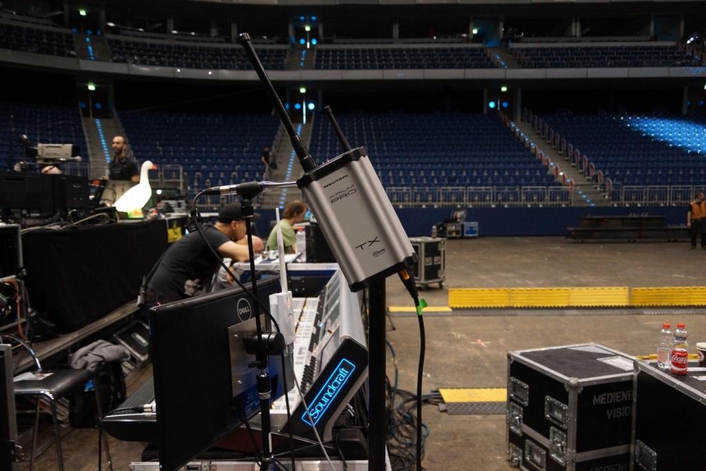 The path to the nearfield speakers on stage is achieved over DANTE via a LAKE LM44 processor. Onstage DANTE breakout boxes are supplied via a fiber optic system. The AES signal goes from the mixer via the fiber system to the stage and is played into the LAKE processor, which in turn sends a DANTE signal to the breakout boxes on both sides of the stage. In this way, the primary and secondary audio signals are transmitted, along with a control V-LAN signal. Parallel copper lines are laid as well, providing a redundant signal path. 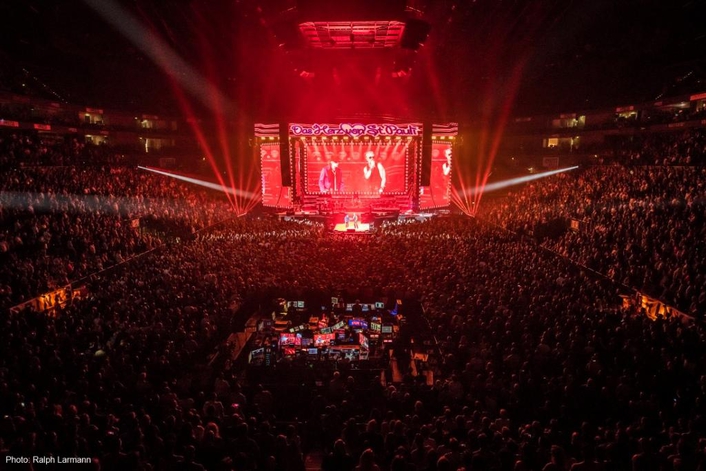 These copper cables transmit an analog audio signal to the left and right front amplifiers, just in case one of the DANTE breakout boxes fails. If this were to happen, the amps would automatically switch to the analog signal provided by the copper lines and apply a 3 ms delay, as defined in the amplifiers’ “fallback mode” settings. Further, if there is something wrong with the sound on stage, the audio engineer can manually mark and switch any amplifiers over to the analog signal. This is the reason for the analog cabling. 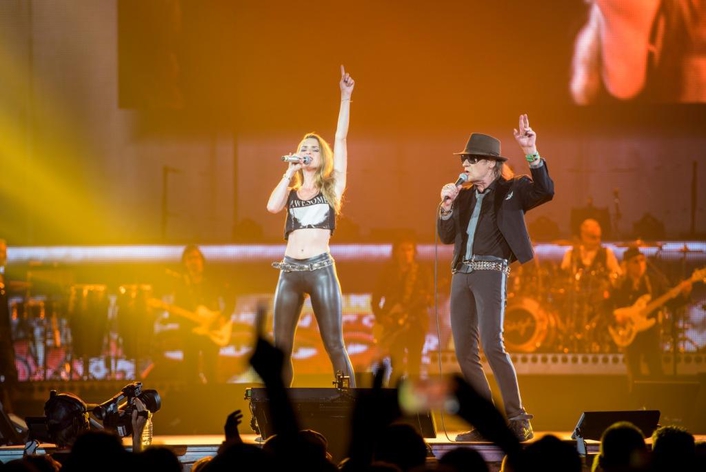 “The transmission with XIRIUM PRO worked perfectly – two shows without any failure! And the sound was really comparable to cable transmission. The app made a very good impression. I think it’s indispensable to be able to see, in the app, if the receivers simply receive a signal or if they are all truly in the green (good) area.” 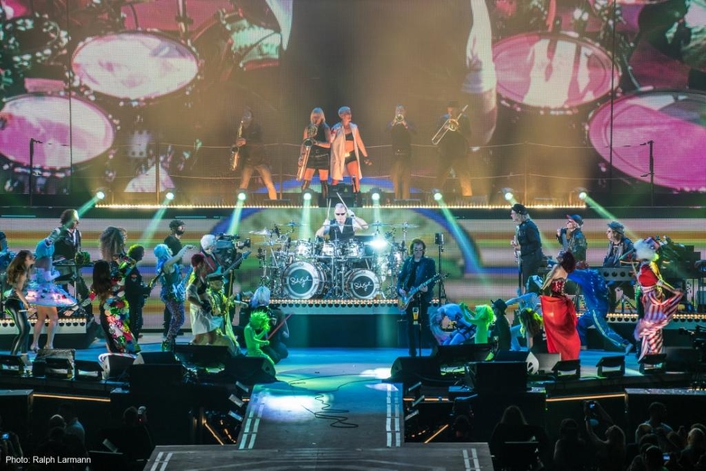