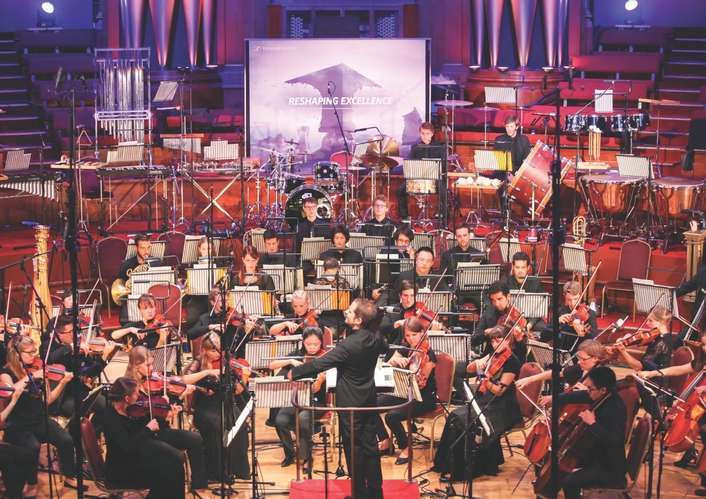 A minimal, controlled amplification corrected the room effects while keeping the typical timbre of the instruments

The first part of the concert presented works by John Adams, Felix Mendelssohn Bartholdy, György Ligeti and Philip Glass, performed by the acclaimed Junge Deutsche Philharmonie orchestra. “This is my second time working with the Junge Deutsche Philharmonie and it’s the absolutely most exciting group in the world to work with,” said conductor Jonathan Stockhammer. “There is so much passion in every position that I can let a lot of the work come from the heart and I can let go… and I love that feeling.” 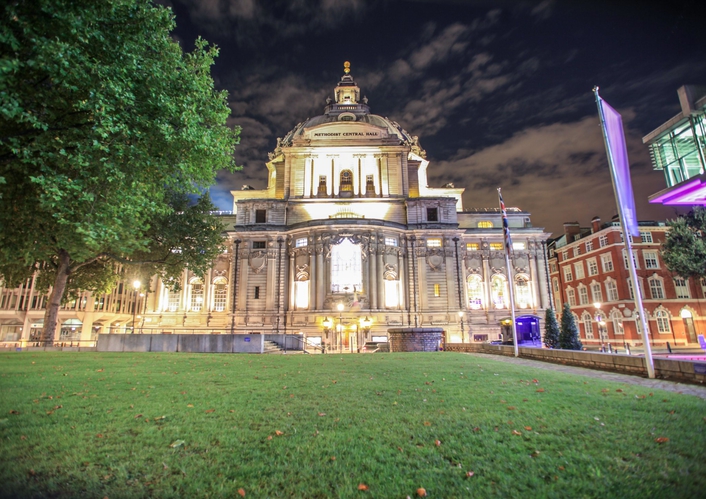 Towards the end of this first section, the orchestra was joined on stage by Imogen Heap, appearing in her only public concert of 2015. Her first song was a unique orchestral arrangement of her hit “Can’t take it in” that had been specially created by Jonathan Stockhammer. This performance would be the debut for an incredible new version played especially for the appreciative audience. 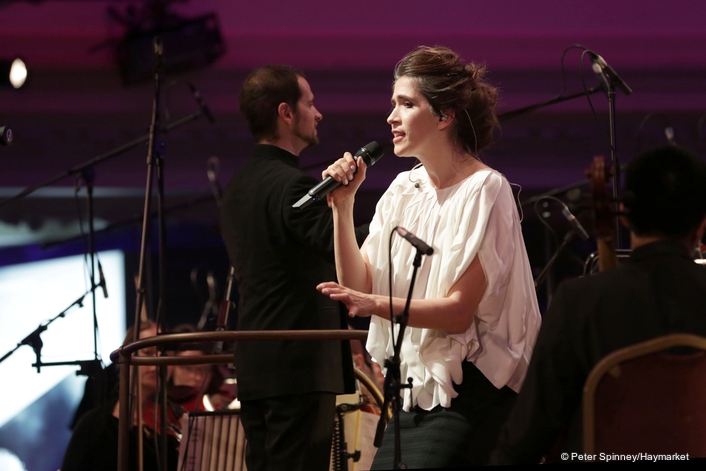 After the intermission, Imogen Heap thrilled her fans with songs and compositions from her inspiring repertoire, MIDI-controlling sound effects, loops and delays (and also her “creatures”) via her self-designed hi-tech gloves, which she had programmed extensively for this event. Jonathan Stockhammer: “To watch her work, to see her develop her pieces – that’s very composer-like. She does so much of the production and the arranging herself, she is really the master of it all. She is so amazingly talented with the programming aspects, the expression comes from her depth of knowledge. She’s like a Debussy of the modern computer and these hand effects.” Backed by musicians from the Junge Deutsche Philharmonie, Imogen also debuted a brand-new composition for the event, “Tiny Human”. 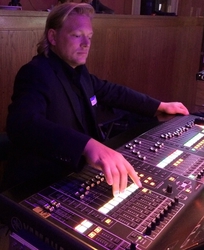 Sound designer and FOH engineer Oliver Voges described the complexity of the event from an audio perspective: “We are actually bringing three completely different elements together. First there’s the orchestra: they usually play live and are not used to getting amplified. Then we have Imogen and her band – their music and the many MIDI signals and effects need to be amplified of course. And last but not least, there’s the 9.1 immersive audio recording taking place, and such recordings are normally made without any amplification happening at the same time, because you want to reproduce the actual hall and loudspeakers would interfere with the natural acoustics.”

However, the acoustics of the impressive Great Hall actually turned out to be quite challenging, and ultimately the amplification via the PA system was the very thing that ensured a fantastic listening experience for the live audience and “saved” the 9.1 recording. A beautiful, large dome spans The Great Hall, and this feature created unpleasant audio reflections. Oliver Voges: “It was a little bit like a whispering gallery, where you speak very quietly in one corner and hear your words very loud at the other end. This happened here and by chance it happened at the conductor’s position. The biggest problems occurred with the woodwinds, as they project to the top, right into the dome. The reflected sound was much louder and had a total different timing than the direct sound.”

To remedy the situation, Voges had to do a mix with his own room algorithms to mix the depth of the room back in. “I have done an architectural mix in an electronic way. In a classical production you would usually do this with different kinds of mics and different kinds of pre-delays to delay the sound to the main array. But here we had no other choice than to do this electronically. Our goal was to keep the colouration of the sound 100% the same, no matter whether the PA is on or off – and we achieved this.” 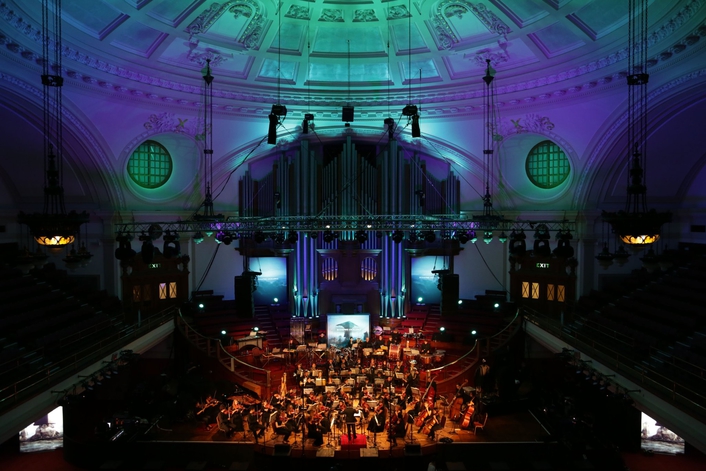 Controlled amplification
Oliver Voges introduced a minimal, controlled amplification that corrected the room effects, stacking the orchestra as on a recording while keeping the typical timbre of the instruments, thus recreating the depth of the room and of the instruments. In addition, Jonathan Stockhammer made some minor musical changes to cater for the room, and these joint efforts created a sound that was pleasant for the audience and ideal for the 9.1 recording.

The actual amplification of the orchestra started out at 0.8 dB above the natural level with the first piece by John Adams and was increased during the first half of the concert to about 1.5 dB to set the acoustical scene for Imogen Heap and the orchestra in the last piece before the intermission. Oliver Voges: “By inaudibly increasing the amplification throughout part I, we avoided any acoustical gap, so the whole

concert sounded a unified, homogeneous whole. During the rehearsals, we always checked back about the amplification with all parties involved – ‘Is that OK with you? Does it distub you in any way?’ Basically everything is linked – the orchestra is linked to Imogen, the FOH is linked to monitors and on top of that there’s the link to the recording – we want to have a good show but also a very, very good recording. I think we have come up with a very good solution that does justice to all elements. After two rehearsal days, Gregor came up to me and said: ’Listen, if the PA is on, the recording sounds even better.’ What more could you ask for?” 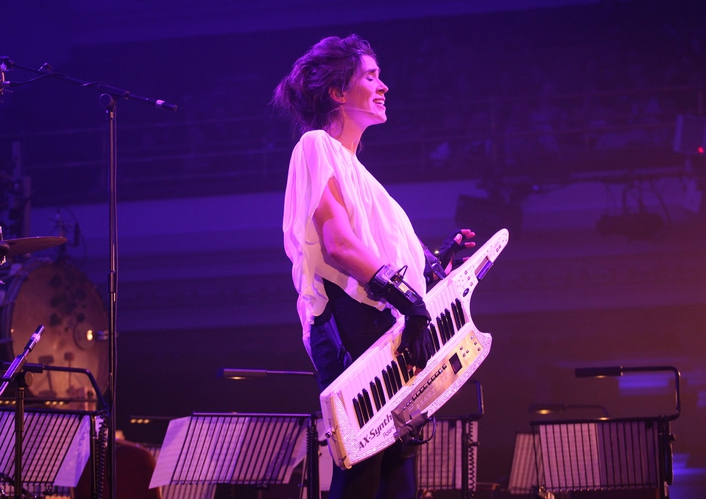 Dante saves time, cabling… and nerves!
The audio crew used a Dante network for the event. Oliver Voges explained, “As there are two completely different set-ups for this event, we decided from the very beginning that we would have two different crews to handle each. We had a monitor and a front-of-house engineer for Imogen Heap, and we also had monitors and FOH for the orchestra. During rehearsals we found that we had to put out sums from the orchestra to Imogen’s monitor engineer, and so on. There was a lot of linking that was unplanned. Luckily, we had placed the four desks in a Dante network, and within a fews seconds I could give anyone an effects return from my desk or a submix from the orchestra. Without Dante patching anything to anywhere, these extras would have taken us another two days and a lot of cabling!”

The 9.1 immersive audio recording
“A 9.1 recording allows me to transport an entire concert hall onto a recording”, explained Grammy award-winning tonmeister Gregor Zielinsky. “Even if I used just the main microphones without any spot mics this would give me a depth of the soundstage which cannot be achieved by standard recording techniques.

“When replaying a 9.1 immersive audio recording, you can move around the room as if moving through the actual concert hall. You will be immersed in the sound of the hall, and changing your listening position would just mean changing your virtual position within the venue but won’t deteriorate the sound – there is no such thing as a sweet spot in 9.1, all spots are great.”

He positioned the main microphones in the eponymous Zielinsky Cube, which includes a height elevation to recreate the spatial impression. For the Zielinsky Cube, a standard AB stereo pair is supplemented by two microphones positioned well above them – these are the front microphones, a centre mic is optional. The same set-up is repeated at the rear. The set-up essentially follows the ITU 5.1 loudspeaker arrangement, and adds four upper microphones, with the elevation amounting to half of the stereo width. 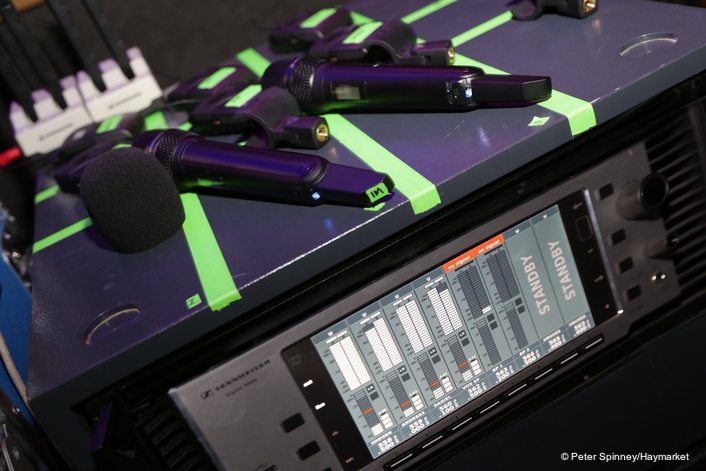 “I have done many 3D recordings but never in such a difficult live situation. To avoid interfering with the recording, the PA has a standard left and right set-up with extremely precise positions and specific coverage. We accepted a little gap in the centre, where the main microphones for the 9.1 recording are positioned. Actually the slight amplification introduced by the PA ‘aligns’ everything, as it were, and helps us to eliminate unwanted reflections and delays caused by the acoustics of the hall. ”

“In the recording, we have a total of 48 mics for the orchestra, and more than fifty channels for Imogen. In total, we are talking about 128 channels for the recording.” The main microphones were four MKH 800 TWINs used as the front microphones in the Zielinsky Cube. Each MKH 800 TWIN has two capsules with signals that can be accessed separately and used to create any pick-up pattern – remotely and in post. Four MKH 8090 wide cardioids were used as the rear microphones. “I additionally used KM 133s as front main microphones, as this gives me further possibilities for fine-tuning the sound. In such complex situations you need to have many options in order to react quickly, and Sennheiser and Neumann microphones complement each other very well,” explained Gregor Zielinsky. 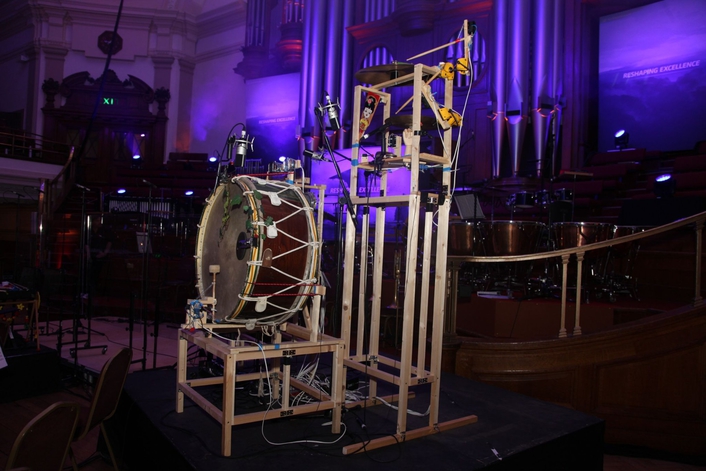 The spot microphones also were a combination of Sennheiser and Neumann microphones. The strings were captured with Neumann KM 185s and KM 184s, as Zielinsky points out: “The Neumann mics have a distinctive signature sound, and are very effective at capturing more of the trebles, which is great for the string sections in the mix.” The woodwinds were also picked up by Neumann KM 184, as were the harp and celesta. Four Sennheiser MKH 8090s were used to mike the brass section. Sound from the percussion sections was captured by seven Sennheiser MKH 8040, with two MKH 8050 used for the timpani. A Sennheiser e 912 condenser boundary microphone was used for the solo piano, while two Sennheiser Digital 9000 wireless microphones were used for lead vocals and moderation. 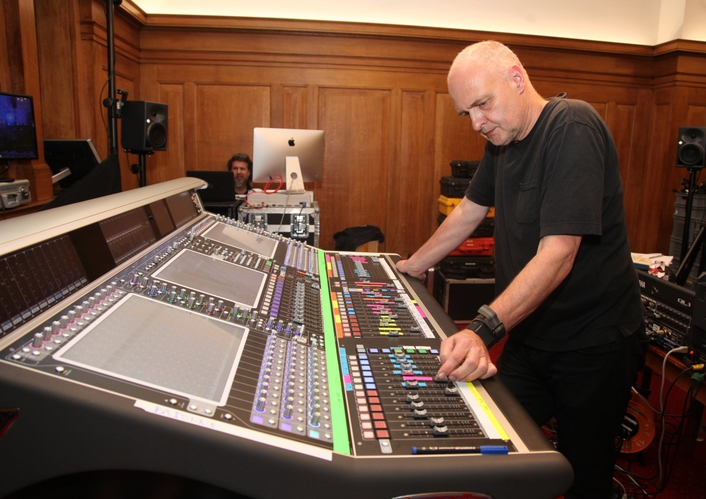 Peter Brandt of Remote Recording Network at the recording desk

A new microphone set-up was then created during the intermission for Imogen Heap’s band and the string quartet and brass players from the Junge Deutsche Philharmonie who joined the band during the performance. A Sennheiser e 912 was used for the piano, an e 902 for the bass drum, and an e 905 for the snare drum. Two Sennheiser MK 8s were used as overheads and a further two for the vibes. Four Neumann KM 185s captured the string quartet, and two KM 184s the brass instruments. Imogen had also brought her “creatures”, a set of percussion instruments which became ‘alive’ via MIDI signals and were picked up with various Sennheiser evolution microphones plus MK 4 and MK 8 large-diaphragm condensers.

In the control room, where the recording desk was manned by Peter Brandt of Remote Recording Network, Neumann KH 120 loudspeakers and KH 810 subwoofers ensured an impressive 3D audio playback. “9.1 immersive audio creates a truly new experience for the listener,” explained Zielinsky. “I like to compare it to the changeover from mono to stereo – it is an equally dramatic improvement in the music. 3D immersive audio is remarkable to experience, but also very simple to set up and record compared to other systems.”

Heralding a new high-end product to come
The 3D immersive audio technology demonstrated by Gregor Zielinsky was one of several cutting-edge developments showcased on the evening: alongside the public concert itself, Sennheiser also provided VIP guests with a first glimpse of a forthcoming milestone high-end product, kicking off the first stage of the unveiling that will be continued with the launch of a dedicated website, www.sennheiser-reshapingexcellence.com.