Immersive Beethoven: The Berliner Philharmoniker in 3D Sound with Sennheiser and Neumann

Digital Right From the Start
In addition to the microphones already available in the hall, numerous microphones from Sennheiser and Neumann were used for recording the concert at the Berliner Philharmonie on November 9th 2014. Tonmeister Gregor Zielinsky, Sennheiser International Recording Applications Manager, had created the concept in close consultation with the sound engineers at the Philharmonie. Zielinsky focused on a completely digital workflow, converting the microphone signals to digital at the earliest possible point in the signal chain: directly behind the capsules. 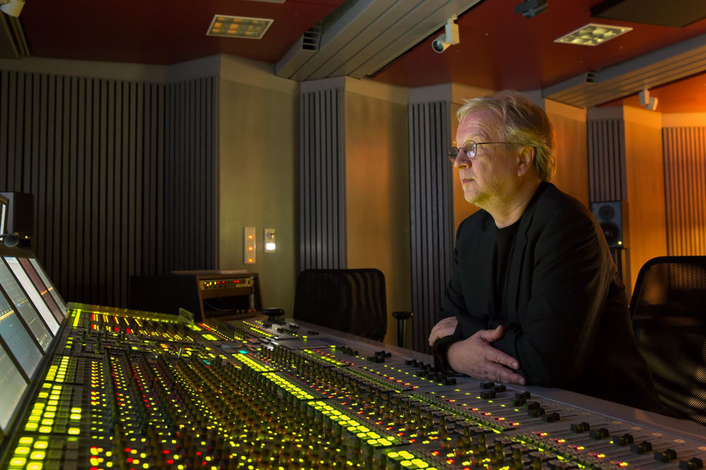 “In the recent past, I’ve already made several major recordings exclusively with digital microphones,” Zielinsky said. “My impression is that completely digital productions have a particular sound character, regardless of which pieces I am actually recording. The sound is always clean, detailed and differentiated. It’s a bit like looking through a freshly cleaned window rather than a dirty one. Particularly when I’m recording classical music, the production gains additional audio quality when digital microphones are used.” 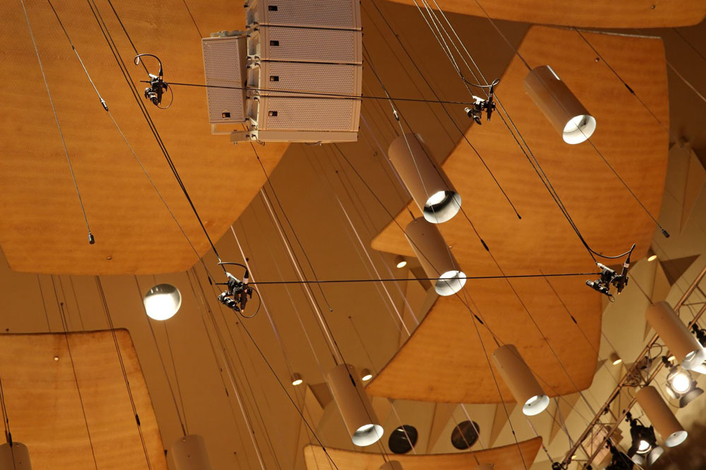 3D Sound
The memorial concert was recorded using a special miking technique that enables the recorded material to be subsequently processed in 3D sound. If one looked closely, one could see a rectangular microphone array suspended from the ceiling of the hall. At the corners of the rectangle were four Sennheiser MKH 800 TWIN on MZD 8000 digital modules. The four microphones were mounted at two different heights but on the same depth plane.

Each MKH 800 TWIN has two capsules with signals that can be accessed separately. In the concert hall arrangement, one capsule of each microphone pointed forwards while the other pointed backwards. In the subsequent 3D mix, the signals will be assigned to the front and rear loudspeakers. The MKH 800 TWINs were accompanied by four Neumann KM 133 D without SBK 133 sound diffraction spheres to allow for more brilliance. The Neumann microphones were pointed forward for the lower and upper front channels of the subsequent 3D mix. During mixdown, Gregor Zielinsky will be able to choose freely between the capsules, which permits any mixing ratio between the microphones. 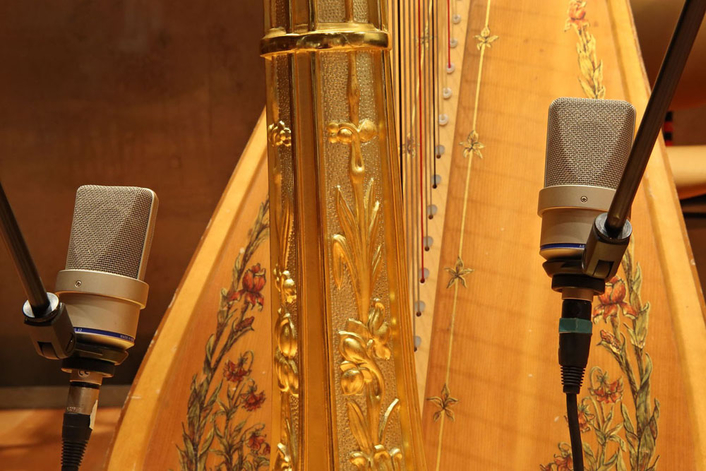 Two Neumann TLM 103 D were placed at the harp

Miking
“Microphones are the best filters!” is a common aphorism, and Gregor Zielinsky made his selection in accordance with this motto. The first and second violins were each miked with three Sennheiser MKH 8040. The brass section was miked with a total of four Sennheiser MKH 8090, and a further microphone of this type was used for the cymbals and triangle. The four solo vocalists (soprano, tenor, alto, bass) sang into four MKH 8090, while the chorus was miked with four MKH 8040 and two MKH 8090. Eighteen KM 184 D from Neumann were divided among the violas, cellos, double basses, bass drum and woodwind instruments. Two Neumann TLM 103 D were used for the harp. 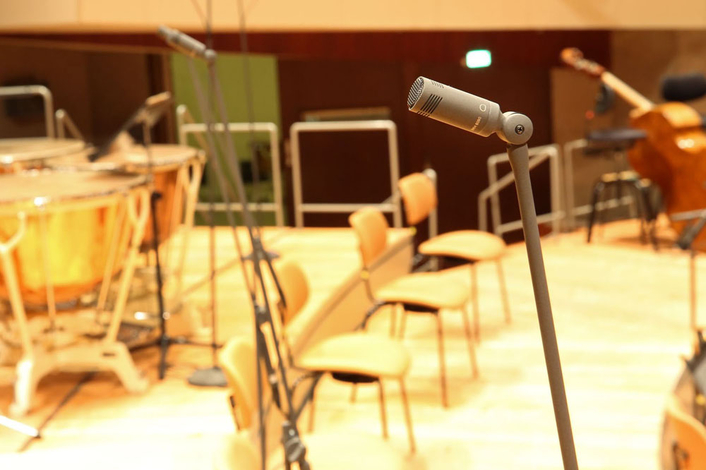 In Berlin, the Sennheiser microphones were used with MZD 8000 digital modules – here an MKH 8090 on an “active tube”

The Sennheiser microphones were used with MZD 8000 digital modules, which were either screwed to the microphone heads in place of the XLR modules or operated at a distance on special signal-carrying extension arms or MZL 8003/8010 active cables. An advantage of this arrangement is the direct proximity of the A/D conversion to the capsule itself and the elimination of a conventional external preamplifier and the noise level this may introduce. 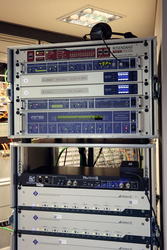 Redundant MADI Cabling
Eight Neumann DMI-8 interfaces (8 x 8 channels) made the digital AES42 audio signals from the microphones available optically and in parallel in the formats AES/EBU and ADAT. A ninth Neumann interface was on stand-by as a spare. The digital outputs were connected with format converters from RME, which Synthax GmbH had supplied for the project as the German RME sales partner. The RME ADI-6432R format converter equipped with two power supply units converts up to 64 AES/EBU signals to MADI; its counterpart ADI-648 does the same with the ADAT format. In Berlin, the MADI signals output from the ADI-6432R and ADI-648 were each sent to a separate, directly controlled router (RME MADI Router), which was used as a splitter.

In order to ensure a redundant connection, both the control room of the Digital Concert Hall and the control room of the chamber music hall, which was assigned to Gregor Zielinsky, were supplied with MADI streams generated from AES/EBU and ADAT signals. “For an event of this kind, it’s better to be on the safe side,” said Dr. Stephan Leschka, Manager Development Electronics and Software at Georg Neumann GmbH, commenting on the sophisticated set-up. Leschka had the possibility to listen in to any signals of the four-channel MADI stream directly at the 19” rack using an RME ADI-642 and headphones.

For clocking the digital system, the Philharmonie’s own house clock was used, which was distributed via a Rosendahl nano clock processor. All individual signals were recorded in Pyramix workstations (Merging Technologies), from which WAVE files were subsequently exported for the Pro Tools system used by Gregor Zielinsky.

In Real Time Without Parallax Errors
The video images of this musical event were recorded by a special camera developed at the Fraunhofer Heinrich Hertz Institute (www.hhi.fraunhofer.de). The OmniCam-360 camera records images in a 360-degree format. The unusual looking construction is fitted with ten compact HD cameras from the Austrian company Indiecam GmbH, which each cover an image angle of 36 degrees and are mounted in a portrait format. The OmniCam-360 system generates a resolution of 1,920 x 10,800 pixels. A total of ten HD-SDI streams are sent from the OmniCam-360 to a server fitted with HD-SDI input boards and high-performance graphic cards. The server combines the individual signals in real time to form a seamless panorama without parallax errors by using a sophisticated stitching algorithm – very different from the solutions in the consumer sector that are available for similar purposes. 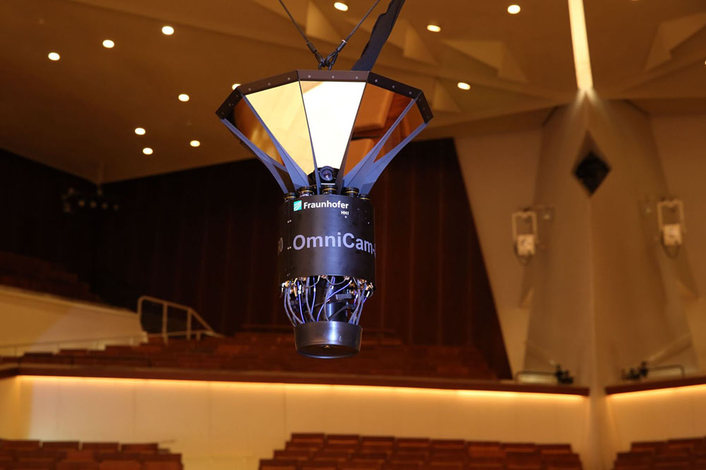 The OmniCam-360 records images in a 360-degree format

“In our collaboration with the Digital Concert Hall, it is our aim not only to ensure that subscribers have access to the images directly from the television control room but also to provide them with additional viewing angles of the events taking place, which they can then select as they wish,” explained Christian Weißig. 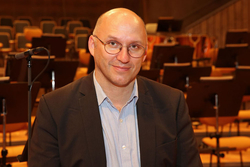 Gregor Zielinsky was thrilled by the potential opportunities offered by the 360-degree camera, which in a way can be seen as the visual counterpart to 3D sound: “In combination with a 360-degree image, it’s no longer a question of immersive audio but of immersive media! My wish would be to have an even more authentic experience in the reproduction of music events.”

Digital Concert Hall
Even without visiting the German capital, it has been possible since 2008 to experience concerts by the Berliner Philharmoniker all around the globe. Each season, around 40 concerts from the “Digital Concert Hall” (DCH) are broadcast as a live stream on the internet, and a few days after the performance they are added to what has in the meantime become an extremely extensive archive.

“Of course, a filmed concert can never completely replace a real live experience,” admitted tonmeister Christoph Franke, who, together with video director Katharina Bruner, is a key member of the DCH team. “But the additional visual component results in a different perception than one would have when simply listening to music without an accompanying video.”

In the past, several productions have already been done in cooperation with the Heinrich Hertz Institute, and Katharina Bruner is extremely impressed with the results. “The 360-degree recording is a fantastic thing! The DCH is already equipped with incredible video possibilities but, as in other areas, we are always trying to go even further. Perhaps the new technology will take us one step closer to the real live experience.” 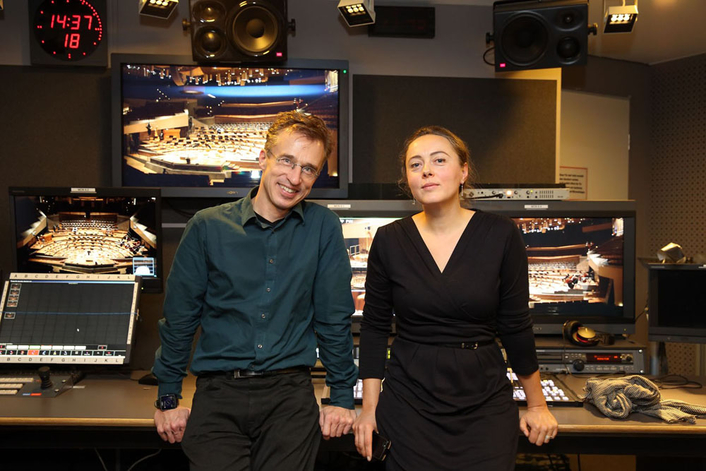 All men will become brothers!
Those interested can find the recording of the sold-out memorial concert online at www.digitalconcerthall.com, the website of the DCH – the images of the 360-degree camera and the audio files for 3D sound reproduction are not available online.

The Berliner Philharmoniker also gave performances of the memorial concert marking the fall of the Berlin Wall in Halle/Saale, Warsaw, Budapest and Prague. The orchestra expressed its thanks in its own very special way to those countries that had played a major role in the peaceful German revolution of 1989: by choosing a work by a composer of each country and, of course, with Beethoven’s Ninth Symphony – with its message of re-uniting those who have been parted. 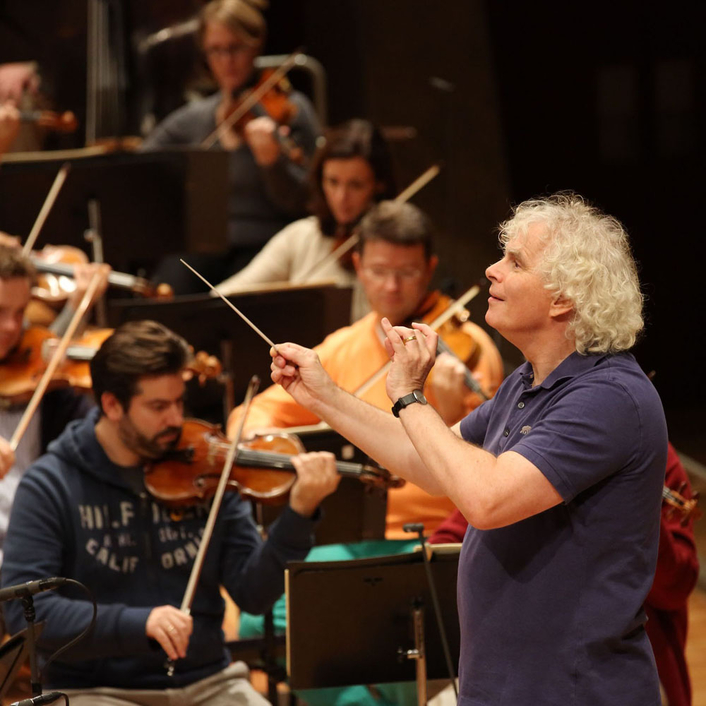