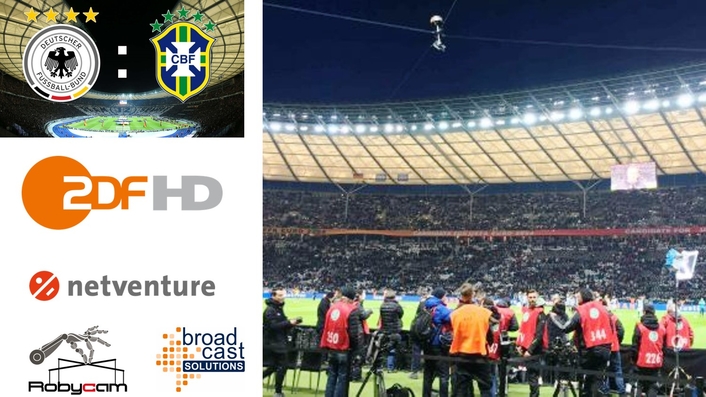 ZDF used the Robycam cable camera system along with a Broadcast Solutions production team together with augmented reality elements, implemented by the graphics service provider netventure production GmbH. New graphic elements could be inserted during the camera’s movement in the stadium. 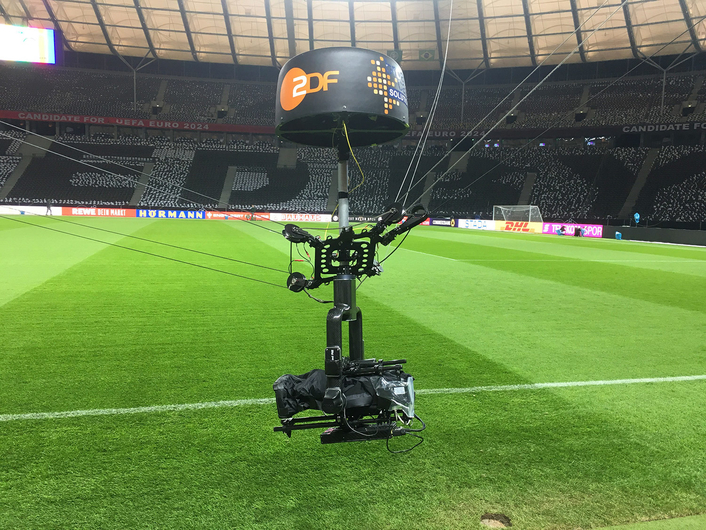 The Robycam signals, including the actual location data in the stadium, and the virtual graphics of netventure were mapped in the computer and then broadcasted. Using these new innovative tools, ZDF was able to offer its viewers additional content and information, even while moving the cable camera system in the stadium.

The football match was not the first use of Robycam for ZDF. The German broadcaster used the Robycam system already during the production of "Mainz celebrates" on the occasion of the Day of German Unity 2017 and early 2018 during the Biathlon World Cup in Ruhpolding.

Robycam is a cable camera system that enables gyro stabilized 3D camera movements. The system allows movements in all three axes: Pan, Tilt, Roll. All three axes are stabilized. There is also an auto-horizon feature that makes the image absolutely stable in wind or swings. Unlike other systems on the market, Robycam has a fifth winch that carries the fibre-optic cable in master-slave mode. As a result, using the Polyspast mode the system is more variable in height. 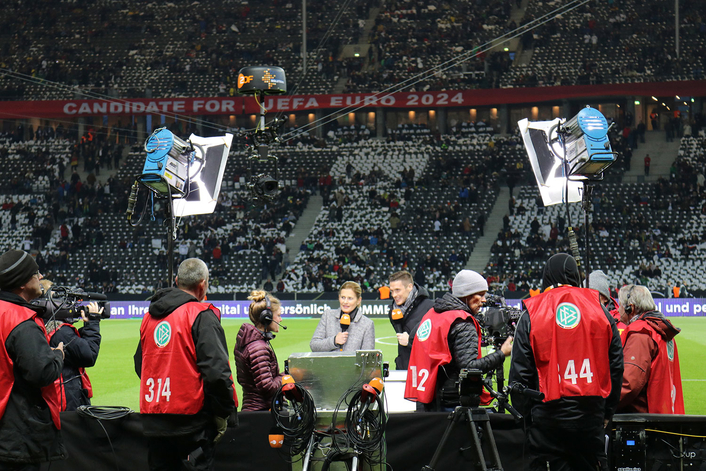 The Robycam system uses four automatic winches, controlled in real time, and a sophisticated motion control system that allows millimetre-accurate and fast camera shots with up to 8 ms in all axes. The largest system has an operating range of up to 250 m x 250 m and more. Robycam is fully redundant (UPS units on each computer) and of course, has all necessary certifications of DGUV17 / 18 (formerly BGV-C1) to be used above people.

The next productions you can see the system live is the Champions League semi-final Bayern Munich vs Real Madrid in Munich, April 25. An additional and special use-case is planned for the event SportsInnovation 2018 (8 - 9 May) in Düsseldorf. During the event and in front of numerous media and club representatives the Robycam system will perform the camera flights of the test matches in the Düsseldorf ESPRIT Arena. Two days earlier (May 6) and in the same stadium, Robycam will produced the flying cable camera pictures during the 2nd league football-match Fortuna Dusseldorf vs Holstein Kiel.

Broadcast Solutions GmbH is one of Europe’s biggest system integrators. Since 15 years the German based company stands for innovation and engineering „Made in Germany“. With subsidiaries in Europe, Asia and the Middle East Broadcast Solutions plans, implements and realises projects in the areas of Outside Broadcast, Satellite Communication, Studio and MCR Broadcast Facilities, Sport Arena Multimedia Solutions as well as mobile Security and Surveillance Solutions. A further emphasis of the company is to consult our customers when it comes to workflow optimization, trainings and production consultancy. Acting as a distribution company Broadcast Solutions offers sale and rental of exclusive and innovative products in defined areas or as worldwide distributor. With more than 100 employees worldwide and working as a hardware independent system integrator Broadcast Solutions offers its customers tailor-made solutions – from idea to implementation and beyond.