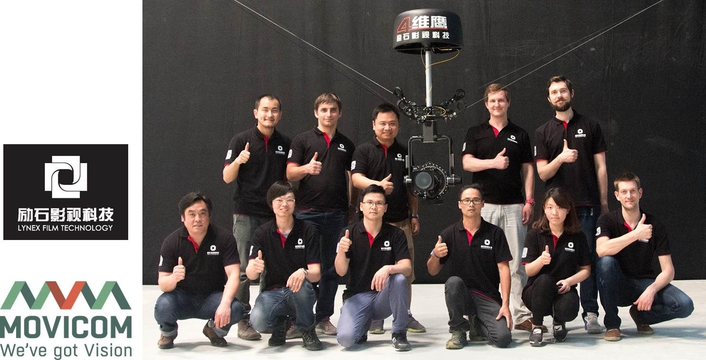 As part of the agreement, Lynex Film is responsible for presentation, leasing, selling and promotion of whole range of the Movicom products and solutions.

The Agreement has been concluded after delivery of the RobyCam 3D system in China for the permanent operation.

RobyСam is an aerial cable system that offers a combination of robotic winches, gyro-stabilized camera heads and advanced algorithms, which allow the camera to follow literally any 3D motion path within the working area.

According to the requirements of the Chinese party, the system has been amended to support the 4К video format for working with widespread video cameras, such as Sony PMW-F55 and RED Weapon.

RobyСam 3D cable system has been already presented by Lynex Film at GIRTV 2016 show, and it will be also demonstrated at BIRTV in August this year.

Movicom, LLC is a leading developer and manufacturer of robotic and mechatronic equipment, focusing on special cameras for using in live broadcasting, outside or studio production.
The company’s portfolio contains modular RobyCam® cable camera system, carbon fiber gyro-stabilized and standard RobyHead remote heads, motion control systems and various electronics useful for building a special camera production infrastructure.
Movicom is also a growing service provider in the field of broadcasting and special cameras around the world.