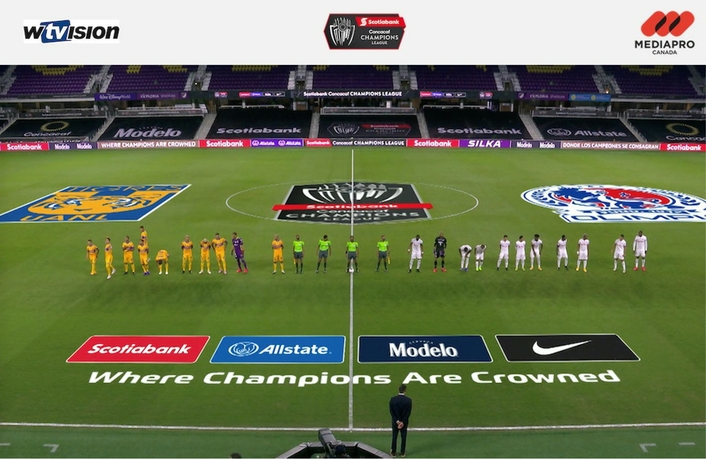 wTVision and MEDIAPRO Canada joined forces to provide an Augmented Reality (AR) Solution throughout the final rounds of soccer's Scotiabank Concacaf Champions League, which concluded yesterday with the final between Tigres UANL of Mexico’s LigaMX and Major League Soccer’s LAFC at the Exploria Stadium in Orlando, Florida. AR3 is an augmented reality (AR) solution that generates high-quality virtual placements on the soccer field. Designed and developed by wTVision, AR3  was implemented in the final seven games of the Scotiabank Concacaf Champions League, from the quarter-finals to yesterday’s final, to create virtual placements, providing the two finalists, the sponsors and CONCACAF itself with added visibility and brand enhancement in front of a global television audience of millions.

Oscar López, CEO of MEDIAPRO Canada, commented that “wTVision’s AR software applications are breaking new ground in the North American sports events sector. At MEDIAPRO Canada, we’ve seen how wTVision’s solutions enhanced the visual impact of the Canadian Premier League with the AR Virtual Stadium – Canadian’s first virtual stadium for a professional sporting event – at a time when Covid-19 restrictions required that all games be played behind closed doors, and we’re delighted to have been part of this new initiative, bringing greater visibility to all players in Concacaf’s premier club tournament".

Flávio Mauricio, Country Manager at wTVision US, said “wTVision’s technical solutions and the synergy between MEDIAPRO Canada are a success and are setting a new standard for North American sporting events".

wTVision’s intuitive turn-key software is responsible for all tied-to-the-field virtual graphics, incorporating the team’s and the sponsors’ logos into live broadcasts. AR3  has been a key player since the onset of the global pandemic and the move to play live sport behind closed doors. The system is capable of generating virtual crowds, complex augmented reality graphics and tied-to-the-field virtual graphics with official statistics. Thanks to AR3, sports broadcasters are able to provide viewers with the emotional experience of live sport.

The Scotiabank CONCACAF Champions League is an annual continental club competition organized by Concacaf (Confederation of North, Central America and Caribbean Association Football) for the top soccer clubs in the region. On March 12th of this year, Concacaf suspended the 2020 league in response to the onset of the Covid-19 pandemic, just three matches into the quarter-final round; play resumed last week with all matches played behind closed doors and with comprehensive health and safety measures in place.

About Concacaf: The Confederation of North, Central America and Caribbean Association Football (Concacaf) is one of FIFA’s six continental confederations, servicing 41 Member Associations, from Canada in the north to Guyana, Suriname and French Guiana in the south. Concacaf means football first. Our members are united by a shared vision: For the Love of Our Game, as well as a unique mission, to develop, promote and manage football throughout the region with integrity, transparency and passion in order to inspire participation in the game.

About wTVision: wTVision creates integrated broadcasting solutions based on software development, branding and design, live operations and specialized human resources outsourcing. The company takes part in thousands of broadcasts every year and has experience in more than 60 countries. wTVision’s solutions for sports, election coverage, entertainment shows and news are, together with its master control systems, the preferred choice of major TV networks and producers all over the world.

MEDIAPRO Group is a leading global production, distribution and content creation group with 58 offices in 36 countries around the world. It operates a fleet of over 80 High Definition and 4K Outside Broadcast units and produces live coverage of more than 12,000 events around the world each year.