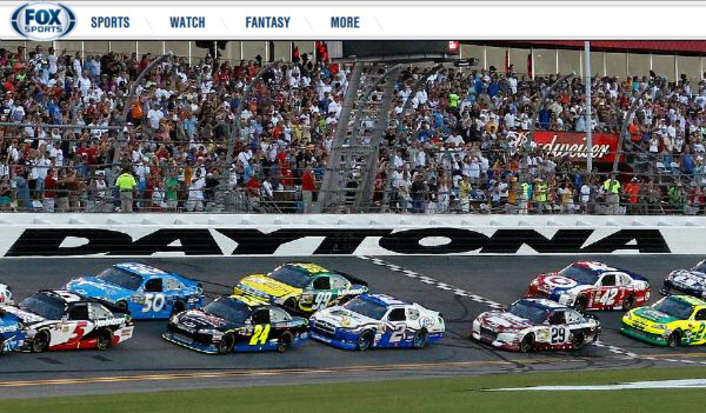 FOX Sports is introducing a new feature for its FOX Sports Go app users during its live broadcast of the renown Daytona 500 on February 21, 2016.  The feature, called “Driver Channels”, allows fans of specific NASCAR drivers to follow their heroes closely on all of the major OTT outlets (iOS, Android and Amazon Fire) and portable devices (computers, tablets and smartphones).

These Driver Channels are part of FOX Sports’ expanding TV Everywhere programming service that is bringing fans closer to the track during a live race. There’s a Dale Earnhardt “88 Car Channel”, a Kyle Busch “18 Car Channel”, a Joey Lagado “22 Car Channel”, and eight others which will be available during the entire Speed Week of this year’s Daytona 500.

For each Driver Channel, three separate video feeds are seamlessly brought together and displayed on screen with a single Viz Engine, Vizrt’s real-time compositing system. Each system has been configured with 2 video outputs and 4 video inputs per FOX Go Driver channel. To present it all under a single interface, Fox Sports has developed a custom Go app controller to synchronize the HD-SDI video and data feeds from the Viz Engine with the live broadcast for the entirety of each race.

The FOX Sports Media Group has been using Vizrt technology for its graphics production since its inception in 2013. Now, producers of the FOX Sports Go Driver Channels want to take the traditional viewing experience a step further and further immerse fans within the linear broadcast of the race. 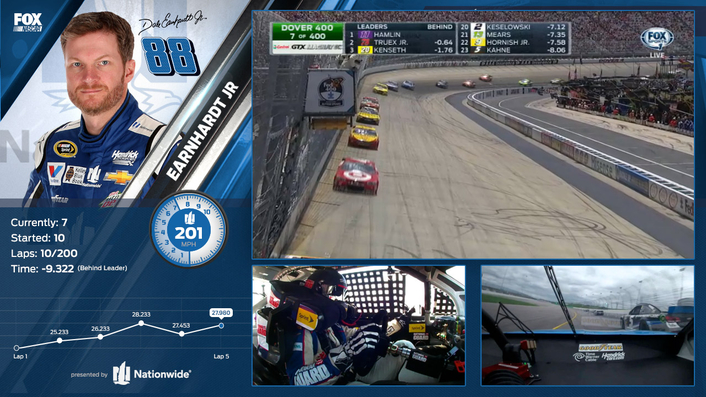 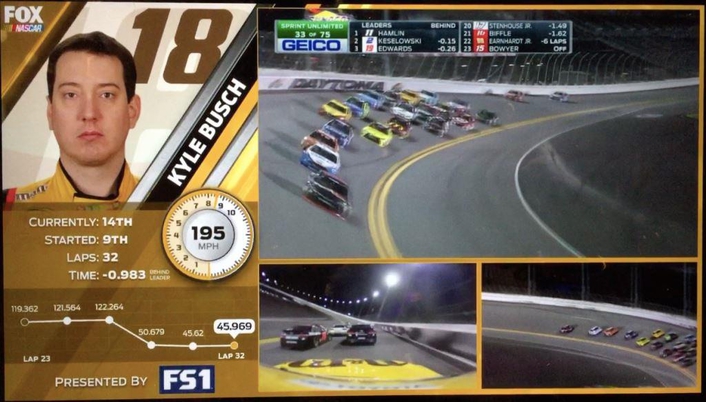 Each channel displays live video and data across all portable devices, putting viewers in the driver's seat

“We’ll be able to display two driver channels with up to eight video sources and other automated data all within a single box solution,” said Zac Fields, Senior Vice President Graphic Technology and Integration at FOX Sports. “With programmable data and automated video switching we have the ability to provide even more additional content to our fans.”

Each Driver Channel features a full-screen graphical interface, developed with Viz Artist graphic design software. The channel supports three separate video windows, all of which are synchronized. A large window displays the program feed (the linear broadcast) in the upper right, while two smaller windows show the in-car video specific to that driver and a video feed of that car racing around the track. Four windows on the left side display various telemetry data from the car, graphically represented with speed dials, lap information, and other data.

“The beauty is that we’re able to tie into our existing systems, as we already use Vizrt technology in our live TV production environment,” said Clark Pierce, Senior Vice President of the TV Everywhere and Special Projects initiatives for the FOX Sports Go service. “Being able to synchronize live video along with real-time data, and giving our fans the opportunity to focus in on their favorite driver, is unique and really a great opportunity for everyone involved. These are the kinds of things we’ve always wanted to do to provide a deeper and richer experience for our fans. Vizrt is playing a big role in helping us deliver that.”

Pierce said that, during the entire Speed Week of this year’s Daytona NASCAR meet, FOX Sports Go will make up to a dozen different Driver Channels available across ten races. This will culminate with the 58th running of the Daytona 500 race, when up to five drivers will have in-car cameras capable of sending back the fan-friendly Driver Channel programming. 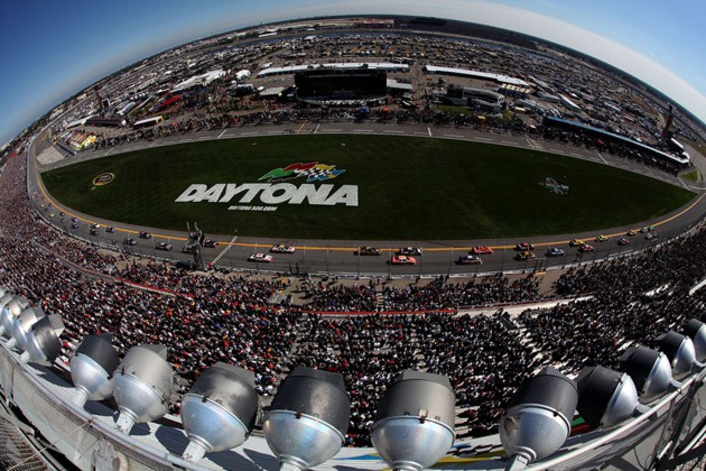 According to Pierce, Vizrt’s technology lets Fox Go seamlessly transition to a workflow which now incorporates live video and data in an automated fashion. It also allows them to take advantage of sponsorship opportunities that they may have missed out on otherwise.
Early tests have been positive and going forward, FOX Sports envisions expanding the technology for use in the OTT coverage of other NASCAR races, as well as different sports.

“The Vizrt team has been very helpful during our trials and it’s really made a difference in how it’s all coming together very nicely,” Pierce said. “We look forward to future collaborations and expanding the FOX Go service even further.”