The TV Live Production of the 2015 Solheim Cup 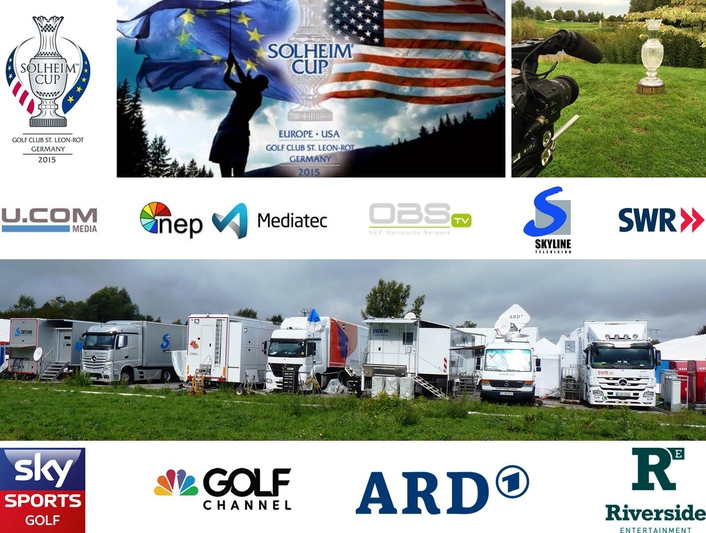 The biggest and most prestigious tournament in women´s golf, the biennial Solheim Cup , was staged for its very first time in Germany from 18 – 20 September. U.COM Media was on-site at the Golf Club St. Leon-Rot to produce the world feed, daily international news, new media content for different social media channels, the event´s in-house TV and to coordinate four unilateral feeds for SKY UK, Golf Channel, SWR and the German Digital Feed provided by Riverside while the European Team tried to win the title for the third consecutive time against the US Team. 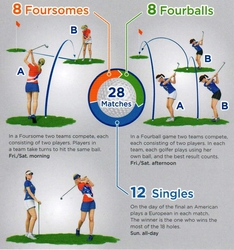 Mode of Production
U.COM was working together with TV Director Felix Marggraff who had laid out a camera plan consisting of 54 camera positions along the 18 holes course. For the world feed production U.COM hired a skilled team of audio, video, intercom and IT specialists together with the OBVans HD1 and HD12 from NEP Mediatec. HD1 and HD12 were set up with Riedel Mediornet to work virtually as one OBVan. The cabeling from the OBVans to the camera positions were all done with fiber cables (~50km). Together with Felix the Technical Director Zlatan Gavran had developed a rotation plan to serve 40 fixed camera positions with 25 LDK-8000 cameras by moving them accordingly to the players on the Tees. 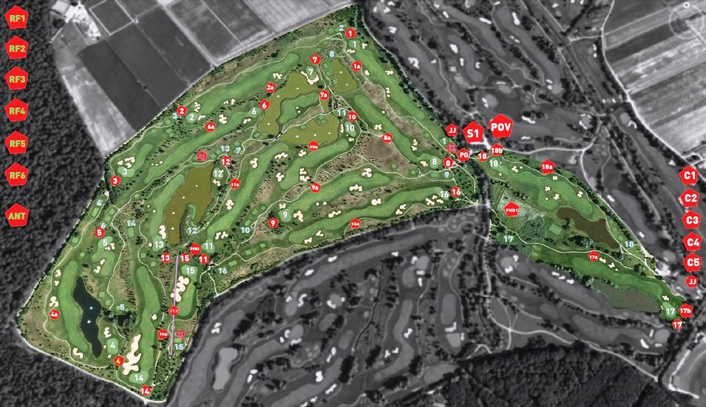 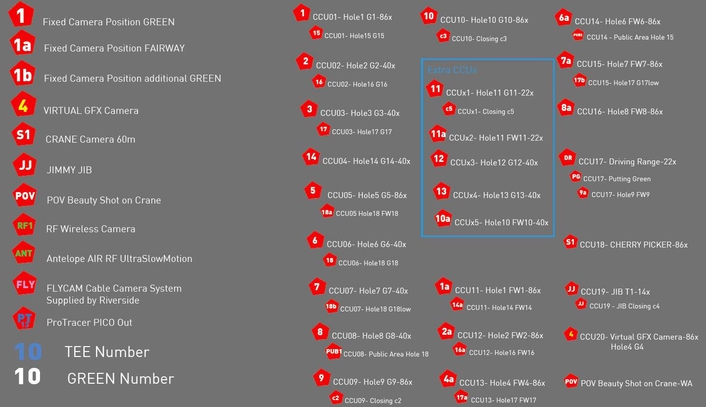 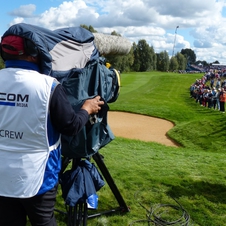 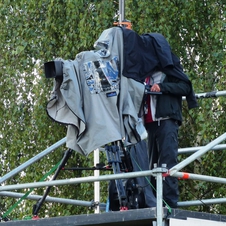 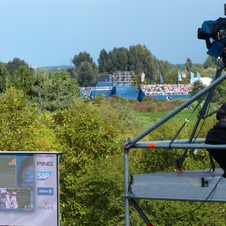 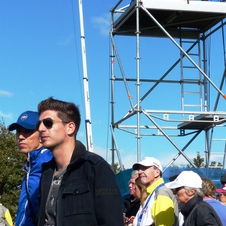 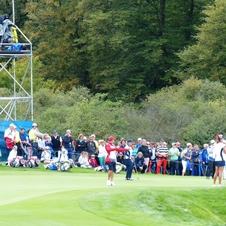 However in addition there were nine RF cameras, one camera and a POV Beauty Shot on a 72m crane, one camera on a Jip on Tee 1, one Cherry Picker, two ProTracer, one virtual green camera, a RF Antelope AIR Ultra SlowMotion camera, a SpiderCam and a Cineflex stabilized camera on a fixed wing plane. 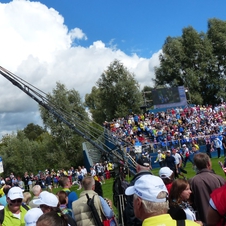 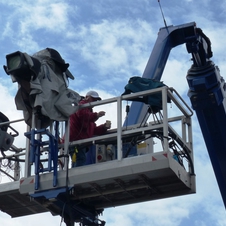 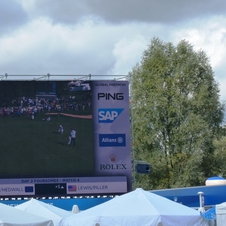 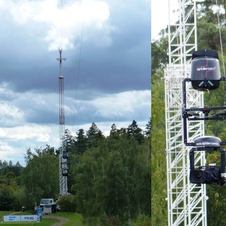 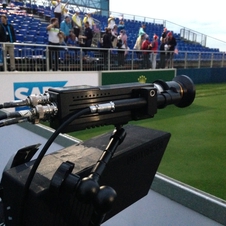 The cellular RF network was set up by drahtloskamera.tv and gave the nine + one Antelope RF cameras the freedom to work everywhere on the course. It also was responsibility of drahtloskamera.tv to modify the LDK-8000 cameras with Link 1500 transmitters and to support the camera crews with always loaded batteries. 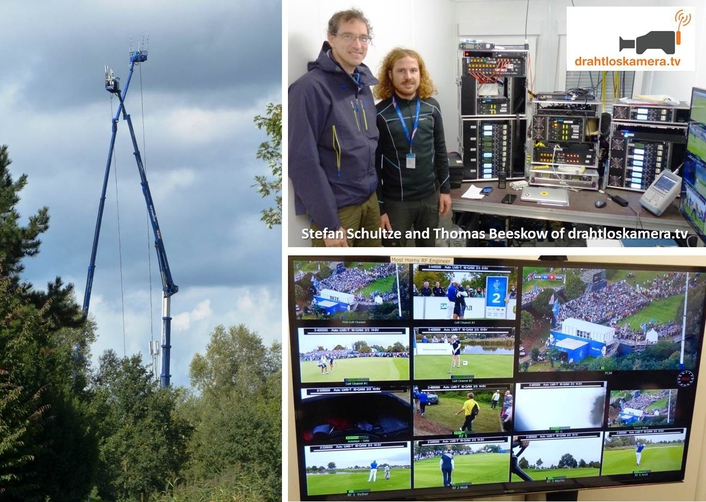 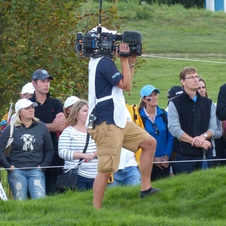 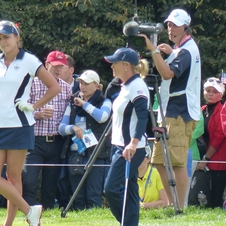 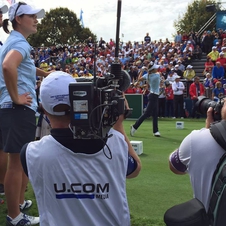 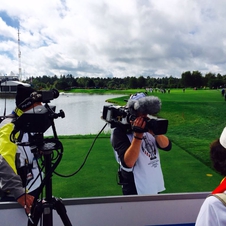 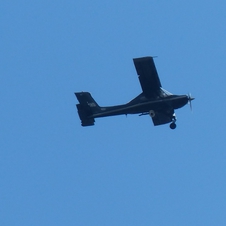 Finally all the camera signals arrived at the OBVan where Felix Marggraff produced the lateral world signal for more than 60 countries including innovative TV graphics such as ball flights (ProTraces), distances between the ball and the hole or the display of wind situations.

Together with the lateral signal the signals of the ISO cameras were forwarded to the MCR where they were distributed to the Golf Channel, Sky UK, SWR/ARD and Riverside. These broadcasters had their own OBVans on location and with the addition of their own ISO cameras they produced the unilateral signal for their spectators in the US, UK and Germany. 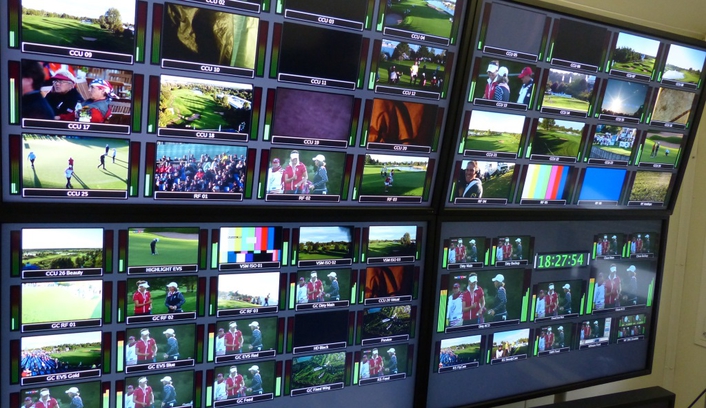 All the camera signals and the lateral signals were available at the MCR for the Golf Channel, Sky UK and SWR/ARD

E.g. Sky UK had set up a studio in the middle of the golf course. There Sky included interviews of experts and members of the European and American teams in the more than 30 hours of live coverage. Sky had hired the brand new Ü8 from TV Skyline and the team around OBVan Manager Daniel Renner supported the Sky team in the very best way. 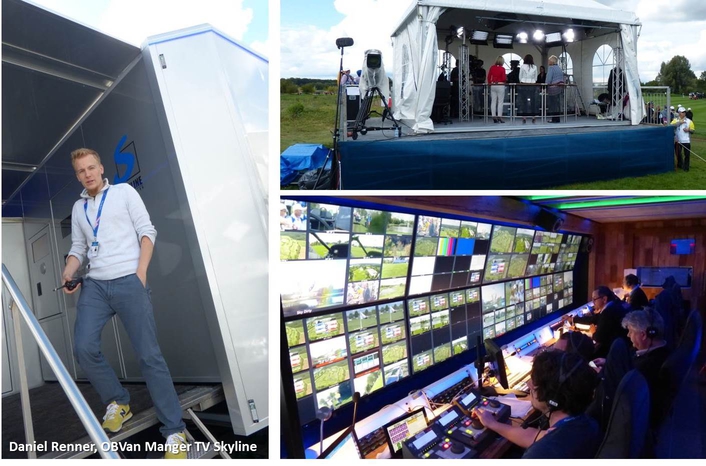 To produce the signal for the more than 18 LED screens distributed across the golf course and to supply the more than 68 thousand spectators with an enhanced world feed signal over the three days the production company Riverside was on hand with an OBVan from LiveCast. LiveCast has added wireless equipment from the RF rental company Bert Blümer: a Steadicam, a FrogCam (GoPro with Vislink transmitter) and two more RF cameras that were used by SWR for interviews.

For effective communication between all the participating rights holding broadcasters, the OBVans, the host broadcaster and their related teams, NEP Mediatec had setup a virtual intercom system consisting of 3x 128x128 and 1x 64x64 Riedel Artist matrix frames. Finally the world feed was also streamed via the Solheim Cup homepage and the ARD Sportschau landing page. 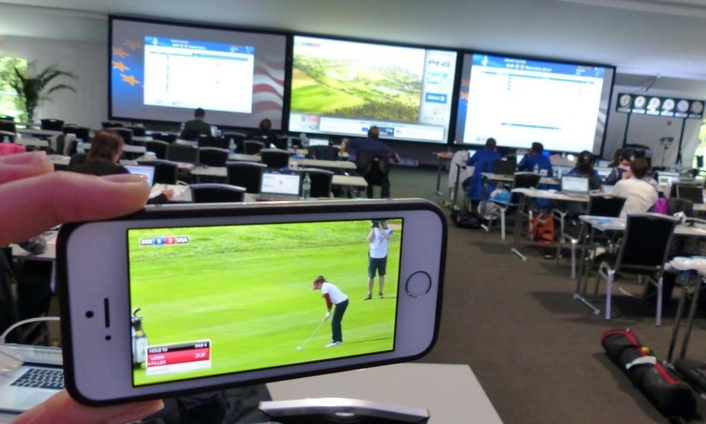