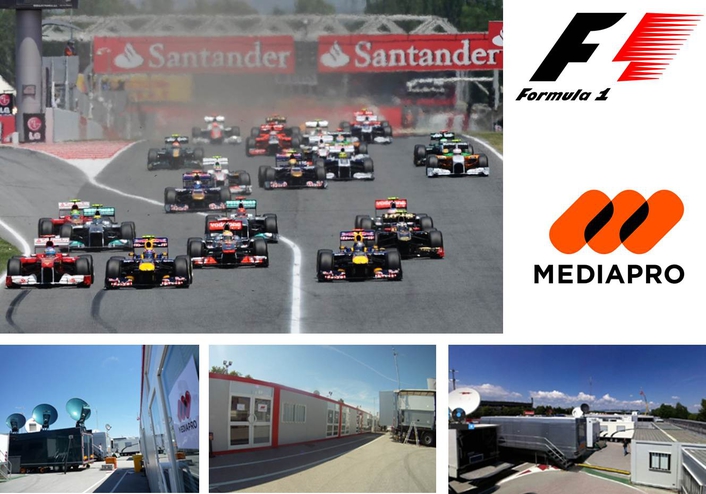 MEDIAPRO distributed the event signal round the world
The MEDIAPRO group worked closely together with Formula One Management (FOM) to produce the TV signal for the Spanish Formula 1 Grand Prix, which took place at the Montmeló track last Sunday. For the third year running the group was the host broadcaster in Spain distributing the signal to the world’s most important TV networks around the world as well as providing logistic and technical services.

A team of 30 MEDIAPRO group staff provided technical help from the TV Compound, managing the OB vans and the 30 commentary positions as well as setting up one of the play-out rooms equipped with the hardware to provide comprehensive coverage of the race. The signal was relayed to countries all round the world.

For the third year running, Unitecnic also provided design, installation and technical support services for the TV Compound area for the distribution of the international signal for broadcasters around the world.

The entire set-up this year was in Full HD, with the whole of the production done in high definition for the first time ever. As a consequence, the system was able to distribute three different signals: WIF (Wide International Feed), NIF (Narrow International Feed) and the programme signal for the big-screen formats around the race track. The set-up allowed the WIF and NIF signals to be distributed to 20 different destinations.

The event demands meant that the entire infrastructure had to meet the highest quality levels with built-in redundancy guaranteeing an optimal functioning of the system throughout the Grand Prix weekend.

Unitecnic worked on the distribution of the programme and the international audio feed to the 30 commentary positions set up for the race coverage.

Eumóvil, Media Móvil, Medialuso, Mediaconti and GOL T all provided services for the coverage of the race and were key pieces of a successful weekend. MEDIAPRO will once again be the Host Broadcaster for the European Grand Prix which will take place from 24th to 26th June in Valencia, where Unitecnic will be involved in the set-up and running of the TV Compound.