PSG launches its new Stadium App ahead of French "Classique"

Paris-Saint-Germain and its Parc des Princes stadium keep modernising. After deploying a Wi-Fi access to the whole stadium, the club launched a new dedicated app for its fans at the venue ahead of the French "Classique" match against Olympique de Marseille.

The Parisian football club has great ambitions at both National and European levels. After winning the French Ligue 1 four times in a row and reaching the quarter-finals of the UEFA Champions League during the last three seasons, it has become one of the best and most popular clubs in the world.

With this new status came the will of innovating and offering new digital experiences to its fans in France and around the world. In this context, PSG decided to launch a new app taking advantage of the new Wi-Fi connectivity at the Parc des Princes stadium.

The Stadium App is an essential tool that allow users to enjoy their Paris-Saint-Germain exeprience to the full, giving them dynamic content on their homescreens so that they don't miss a thing. 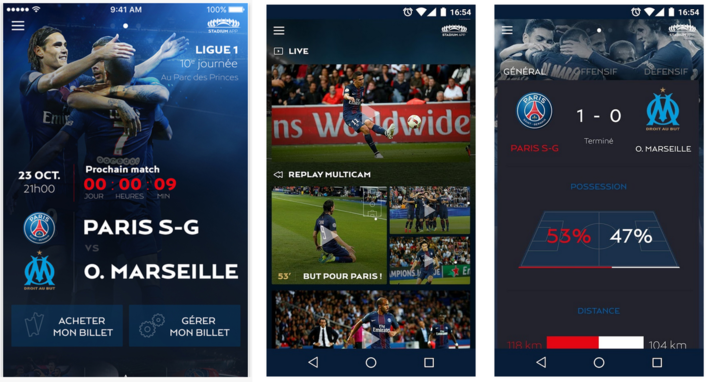 The Stadium App includes innovative features such as :
Live video content during matches: multi-cam, slow-mo replays and live action (available only to users connected to the local Wi-Fi);
Ticket management with M-tickets provided;
Augmented reality in order to guide fans and help them locate points of interest around the stadium;
Game Connect, Netco Sports' live gaming solution that allows users to make predictions and prognostics during the matches (with PMU) ;

The app is already available on the App Store and Google Play. Its launch matches with the big clash between Paris-Saint-Germain and Olympique de Marseille, known as the French "Classique", Sunday 23 October at 9PM UTC+2.
After PSG Fotofan and PSG Live, Paris-Saint-Germain once again trusted Netco Sports to assist its digital development.