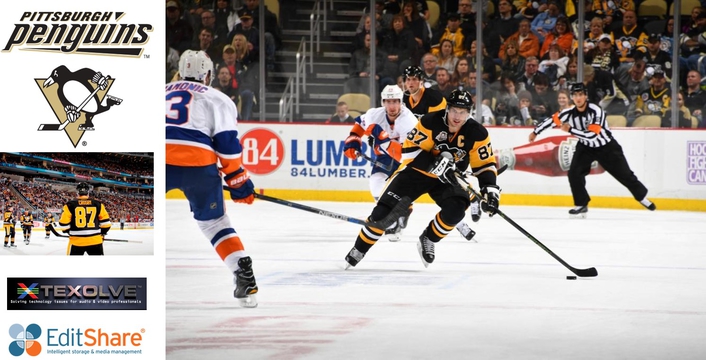 2015-2016 was a pivotal season for the National Hockey League's Pittsburgh Penguins. After a rough start and mid-season coaching change, the team skated all the way to the Stanley Cup Finals, winning their fourth championship after a seven-year dry spell. The momentum continues this year as the team enters its 50th anniversary season and seventh inside the state-of-the-art LEED gold-certified PPG Paints Arena, the first arena of its kind in the NHL.

PPG Paints Arena is also home to the Penguin's award-winning on-site production operations that feeds live game coverage and produced content to the NHL Network, Pittsburgh's regional sports network and the team's online channel, PensTV, as well as to the 900 wireless IPTV media kiosks, in-suite touchscreens, extensive digital signage and massive Mitsubishi Diamond VisionBoard—inside the arena. From animated game opens to ‘In The Room’ an Emmy-winning monthly series that goes behind the scenes into the training and lives of the players, the production group creates and manages a litany of multiplatform media to engage fans, as they like to say, "Game day. Off Day. Everyday." "We shoot and ingest a lot of video and produce a lot  of motion graphics," says Director of Production Operations Mike Davenport. "And we deliver even more content back out to our fans." 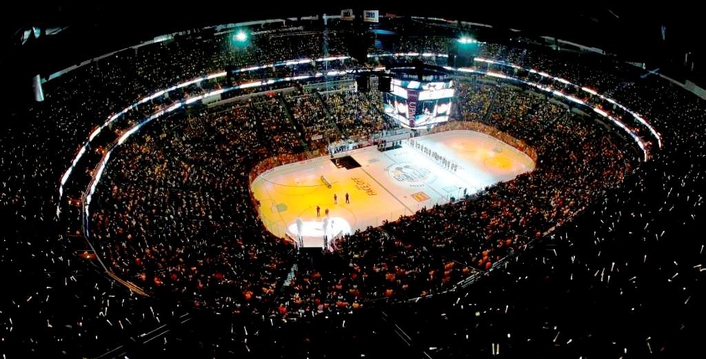 The Penguins Production Operations has been an EditShare technology partner since 2007 and now relies on its third generation of EditShare Shared Storage technology, the XStream EFS platform with Flow production asset management (PAM) and Ark tape-based archiving solution, to support 20 editing/graphics stations connected via a 10-Gigabit Ethernet backbone. In addition, the EditShare integrated workgroup relies on 2 EditShare Flow Ingest Servers(4 channel ingest) units to capture multiple ISO cameras during home games. "EditShare handles everything we do flawlessly," Davenport says. "We shoot with a lot of different camera formats and codecs and we've never had any issues capturing or editing, whether using Adobe Premiere CC or Final Cut Pro." EditShare systems, in fact, have a wide support for industry-standard NLEs and popular formats from regular MXF and QuickTime files to RED, R3D and DPX. 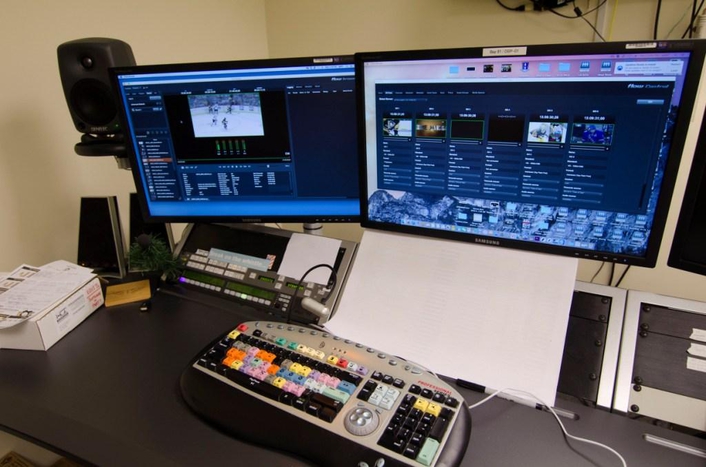 Browse and Ingest with EditShare

For the Penguins, who keep two years of content in their EditShare online and nearline archive and ingest 6 channels of video on game night alone, a robust and reliable scale-out storage system that could grow with their collaborative editing needs was a must. Initially discovering EditShare through their Pittsburgh-based broadcast integrator Texolve Digital, the Penguins became the first sports team production facility to implement XStream EFS at the heart of their production operations. With its combination of the EditShare File System (EFS) and an innovative hardware platform, XStream EFS was designed specifically to handle media intensive production environments and provide the highest level of data protection. 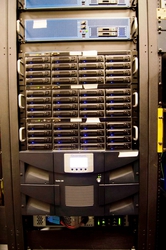 With vast amounts of media to manage, the single EFS namespace eliminates management of multiple storage volumes making it simple for the Penguins to create media spaces for different projects with unique setting user and group rights.  Adding capacity is seamless and production continues as before while the EFS automatically rebalances the distribution of data.

Fully integrated the workflow from ice to air is seamless. On game day, Flow ingests six feeds from around the building as well as an NHL feed containing highlights from around the league. These include individual cameras, truck clean and dirty, and in-house program. The Edit While Capture (EWC) function allows staff to create clips during ingest. Stored on the EditShare XStream EFS, these clips can be immediately accessed and edited using a variety of DV and Apple ProRes based codecs.

It was last year's triumphant championship season during which the Penguins transitioned to the XStream EFS adding another layer of pressure to the hard-working video operation as it chronicled the hockey powerhouse. "We installed the new system mid-season during a ten day break when the team was out of town and we were a little nervous at first but the guys had the system switched over successfully in that time period," says Davenport. "We copied all of the files to a placeholder system, then transferred them back over to the new system. Because we were mid-season—and it was a championship season—we couldn't have any delays. And we didn't." With their older EditShare system, they could not add another terabyte without reconfiguring the system. "With EFS," he says, "all we need to do is close drive spaces and build up another, letting us easily split up game footage and structure it year by year." 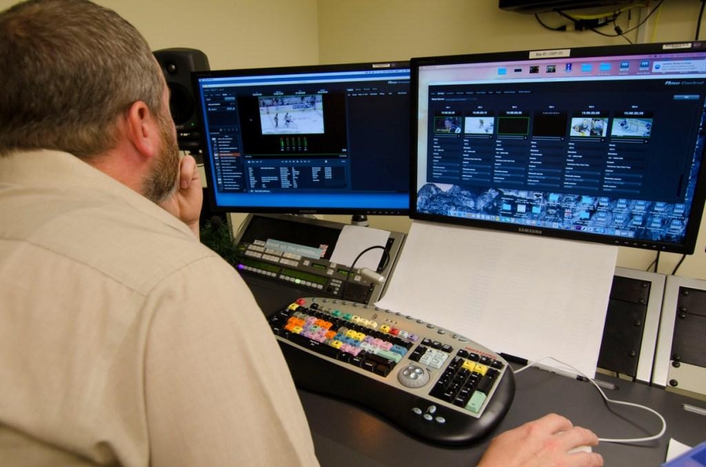 The addition of Flow, which the Penguins are using to record, review and retrieve game footage in real time, gave the Production Operations even more ways to instantaneously access and manage content. Seamlessly integrated with the XStream EFS storage platform, Flow's PAM toolset allows the Penguins team to package content for multi-platform distribution. On away game nights, the Penguins use Flow to record game footage via satellite directly to the EditShare EFS storage. This lets them edit recaps and highlights as quickly as the puck slides across the ice toward the goal. "Flow allows us to turn around game recaps of goals or funny fans or anything unique to social media quickly and efficiently," observes Davenport. "Since Flow Ingest records off satellite, that means we've got the same access even when the Penguins are on the road. Because of that, we consistently create great social media content, which is pretty impressive and well received by our fans." 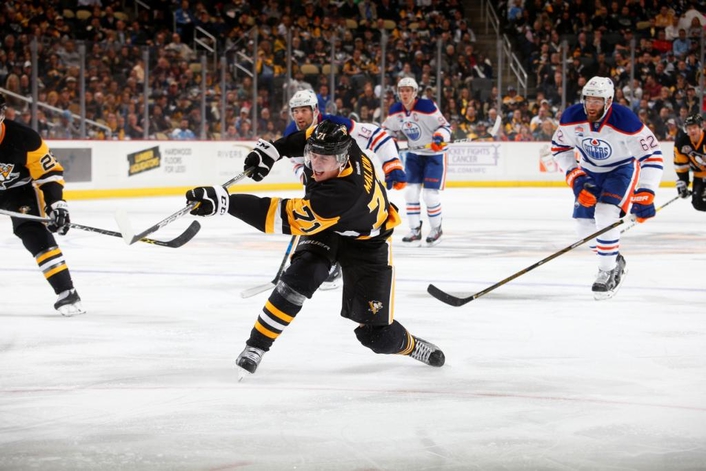 The Penguins regularly depend on Flow Browse, the main Flow client for managing content, to pull older footage from the nearline and offline archives. "At the end of the season, we purge a lot from the online EFS storage, since we know it can easily be restored from the archives," says Davenport. "With our 50th anniversary this year, we've just wrapped up a 3 hour documentary. Flow has been indispensable when searching for just the right older clips. We pulled a ton from the archive and easily restored it to the main server for editing. That alone saved us from many lost hours of manual search and retrieval."

Integrating and operating the new storage system within the video operation's Mac-based platform couldn't have been easier, concludes Davenport. "Everything just looks like various drive spaces but can be managed as one namespace," he says. "It's so logical for users and a breeze for administrators." He's been equally impressed with technical support. "Any issues with the systems are looked at immediately by EditShare Support. And we are always kept in the loop while they resolve any issues." It's yet another reason why EditShare has become a valuable Penguins playmaker in delivering dynamic and engaging content to the team's video producers and, ultimately, its devoted fans.