Athletes can spend years devel¬oping their skills and preparing for one moment of glory. In the end, it can all come down to less than a second

That’s why, as the 17th FINA World Championships get under way this summer in Budapest, OMEGA will bring its long experience in time­keeping and data handling to the competition, ensuring precision and performance that is worthy of the world’s greatest aquatic ath­letes. When so much depends on accuracy, we are committed to nothing less than perfection. Held between July 14 and 30, the FINA World Championships are the premiere event on the swim­ming governing body`s calendar. Started in 1973, they were once held every four years between the summer Olympic Games. However, since 2001, they have taken place every two years.

This year in Budapest, the event is set to be the largest sporting showcase that Hungary has ever hosted. Almost 3,000 athletes will descend on the city to compete in six different disciplines includ­ing swimming, water polo, diving, open water swimming, high diving and synchronized swimming.

Each of the 75 contests will take place in five iconic venues. The brand new Duna Arena has been built for the diving and swimming competitions, while water polo will be held in the legendary Alfred Hajos swimming complex on Mar­garet Island.

Synchronised swimmers will com­pete at the outdoor ice rink next to Heroes Square, and high divers will show off their skills alongside the River Danube, under Castle Hill. Finally, open water swimming will be held at beautiful Lake Balaton, in the nearby city of Balatonfüred.

OMEGA has been at the fore­front of international competitive swimming for many years, and in addition to its timekeeping activ­ities, is responsible for the devel­opment of some of the key tech­nologies used to determine and record the results. These include the first semi-automatic timer for swimming events, and the famous touchpads positioned at both ends of the pool lanes.

With the next major competition now here, OMEGA is looking for­ward to extending its legacy once again.

As high-tech as they were at the time, the chronographs of the 1930’s now seem quaint compared to the timekeeping technology of today.

In the 21st century, the dis­tance between first and se­cond place, or the setting of a new world record, can come down to a hundredth of a se­cond. To measure such dis­tances requires a commitment to precision that could only be described as obsessive: a quality rightly attributed to the Swiss watchmaker OMEGA.

OMEGA chronographs were used to time sporting events a century ago, but it wasn’t until 1932, that the brand’s asso­ciation with competitive swim­ming began. For the first time, a single company was entrus­ted with the official timekee­ping for all disciplines at the Olympic Games, including swimming.

OMEGA’s unwavering com­mitment to precision timekee­ping did not go unnoticed by FINA, the federation that go­verns aquatic Sports around the world. OMEGA served as official timekeeper at the federation’s first ever wor­ld championship in 1973 and recently extended that rela­tionship through to 2021.

As well as timing the most im­portant swimming events in the last several decades, OMEGA has been behind the develop­ment of these key technologies.

From the world’s first semi-automatic swimming timer, to the quantum age.

Introduced at the 1956 Melbourne Olympic Games, The Swim-Eight- O-Matic was the first semi- auto­matic timing device with a digital display. It allowed timekeepers to distinguish between swimmers who finished virtually at the same time.

It was succeeded in 1972 by the Swim’O’Matic, which was accu­rate to the nearest thousandth of a second. As is often the case with technology, big improvements equal smaller hardware, and by 1980, the Swim’O’Matic was con­veniently packaged in a compact 1.2 kg briefcase.

More recently, the new Quantum Aquatic Timer has redefined time­keeping technology with an en­hanced precision of 0.1 parts per million. 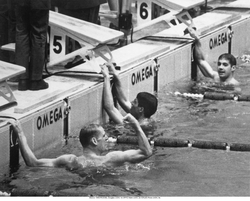 But these compact timing units do more than just collect and store running times. They also share in­formation, instantly. The split sec­ond the raw data is collected, it is distributed, to live-result feeds, on-site and across the world.

The famous touchpads elim­inated the possibility of hu­man error by allowing each swimmer to ‘stop’ their own time, by touching the pad immersed at the end of each lane. While they respond to contact with the swimmer’s body, they are not affected by contact with water. Introduced at the 1967 Pan-American Games in Winni­peg, touchpads are one of the most profound innovations in the history of sports timekeep­ing. Their development was motivated by a contested hu­man-eye decision at the Rome 1960 Olympic Games.

The starting blocks, like those developed for track events, have false start detection systems and acoustic start devices which en­sure that each competitor hears the start signal at the exact same moment.

At Olympic or World Champion­ship level, OMEGA’s high-speed video cameras are put to work. Judges can consult the cameras if any dispute should arise. The technology was fa­mously put to the test in the men’s 100-metre butterfly event at the Beijing 2008 Olympic Games. The electronic timing system de­termined that Michael Phelps had beaten silver medalist Milorad Cavic by a hundredth of a second. The high-speed video cameras were able to confirm exactly the same result. An OMEGA backup system was able to verify, indisput­ably, the perfection of the primary system. Four years later in London, the same technology would con­firm that Phelps had lost narrowly to Chad Le Clos in the 200-metre butterfly. In that event, the margin of victory was five one-hundredths of a second, about the time it would take to read any word on this page!

OMEGA’s Live Timing website (www.omegatiming.com) was introduced in 2000, to give the global audience access to each competitor’s details as well as the ranking, the split times, and infor­mation on any records that might have been set or broken. 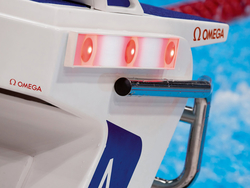 An innovative light system called The Swimming Show was intro­duced at the London 2012 Olym­pic Games. This advanced system features mounted lights on the starting blocks, positioned at the end of the pool. A single dot of light on a swimmer’s starting block indicates first place; two dots of light indicate second; and three dots of light confirm a third place finish. This easily accessible information enhances the experi­ence for spectators, who are better able to track the race they are watching.

The backstroke ledge improves the push and trajectory of the backstroke swimmers at the start. The device allows the swimmer to take a higher position in respect to the water level at the start phase.

Minimal contact to the water means less counter resistance and a stronger push-off.

The height of the backstroke ledge can be adjusted to several different positions using a manual rotating system. Its grip mecha­nism is covered with an anti-skid surface, thus providing more con­fidence for the swimmers at the commencing of the race.

This new equipment was de­veloped with the assistance of OMEGA brand ambassador and twelve-time Olympic medallist Natalie Coughlin, along with sev­en-time Olympic medallist and backstroke specialist Aaron Peir­sol. Their experience and success as backstroke swimmers allowed them to make valuable contribu­tions to the concept of the back­stroke ledge. They were also in­volved in the final stages of its creation.

Used at Olympic and World Championship level, lap counters count remaining laps in the longer 800 and 1500m races. Placed one per lane at the bottom of the pool, the swimmer is given a clear count of laps to go, each time they reach the turning end.

Prior to this improvement, offi­cials standing at the end of the pool would display the number of remaining laps manually to the swimmer, meaning that the com­petitor would have to shift his or her attention from the race. The lap counters, with their highly vis­ible digital screens, ensure that the swimmers can concentrate on their technique, pace and position in the race while remaining easily aware of the distance they have yet to swim. 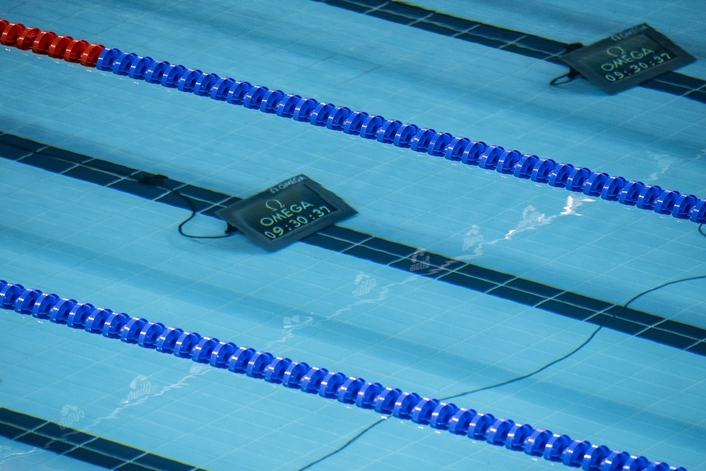 Unlike other pieces of equipment or technology that OMEGA has introduced in the past, the lap counters will have no effect on the timekeeping or the data-han­dling of the races, and have been created solely for the purpose of improving the race experience of each swimmer.