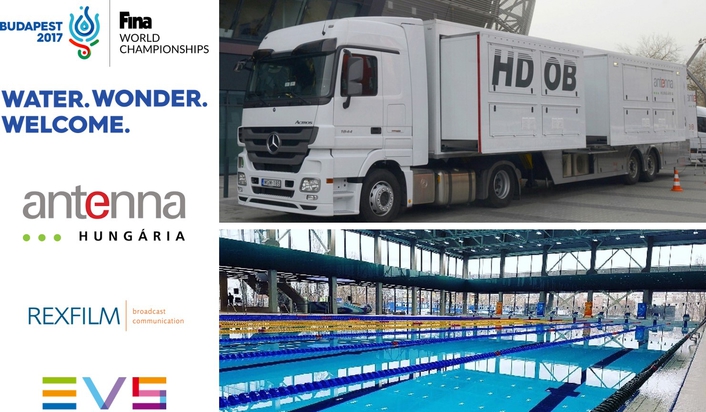 In order to modernize its OB facilities, Antenna Hungária, the Hungarian terrestrial broadcasting, telecommunications and live production services provider, has purchased multiple solutions from EVS, the live video production technology leader. The solutions will be installed into the service provider’s OB facilities by Hungarian systems integrator and long-time partner of EVS, Rexfilm Broadcast and Communications Systems.

This order includes 16 XT3 live production servers in ChannelMAX mode with Dual-LSM functionality, four IPDirector live PAM workstations and three XFile3 systems. All of these will be integrated into OB units ahead of the live production of the 17th FINA World Championships of aquatic sports, which will be held in Budapest and Balatonfüred this summer between 14-30 July.

The order of the new systems mark the second phase of upgrades to Antenna Hungária's current OB facilities. At the end of 2016, the company ordered eight XT3 servers as well as multiple other live production solutions, including LSM Connect, Epsio Live, IPDirector, Ingest Funnel Lite and Truck Manager. In total, the service provider has acquired a total of 24 live production servers which, depending on their I/O configuration, delivers Antenna Hungária up to 456 live channels.

Talking about the technology that’s set to be installed István Kolozsvári, chief engineer at Antenna Hungária said: “We placed this order for EVS equipment because of its speed and reliability, which we believe will enhance our workflows. With these solutions, we’ll be able to deploy a powerful, scalable live infrastructure that our teams can use to create the best live programming.”

The XT3 live production server is the industry-standard for the creation of replays during live production and when in its ChannelMAX configuration, gives users the ability to benefit from increased channel density. Antenna Hungária’s servers also feature Dual-LSM functionality, which lets two operators simultaneously create replays from a single server. Production teams will also benefit from the XT3’s wide range of native codecs.

“As the FINA World Championships come to the region, it’s important that we can deliver the best services possible for creation of the highest-quality live programming,” commented Vilmos Váradi, executive producer at Antenna Hungária. “And the way to do this is to deploy live production facilities that feature the latest and best technology available to the market.”

“One of the reasons we’ve worked with EVS for so long is that we know the company and their technology,” said Gábor Csapó, managing director of Rexfilm. “With our extensive experience of working together, we’re able to integrate the products quickly and easily, knowing they’ll work first time so we can meet the deadline for the OB facilities to be rolled out for the FINA World Championships in July.”