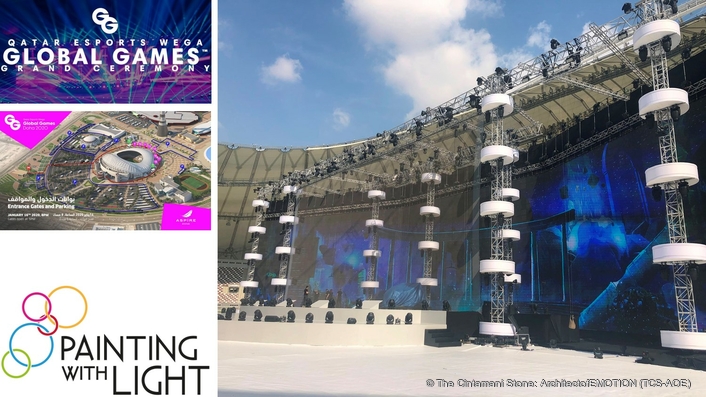 Painting with Light (PWL)’s creative director Luc Peumans was asked to design an eye-catching lighting scheme for the opening ceremony (OC) of the first Qatar eSports WEGA Global Games. The OC event was staged in the Khalifa Stadium in Doha and enthusiastically attended and appreciated by 14,000 eSports fans. Show artistic director Steven Martin from The Cintamani Stone: ArchitectofEMOTION (TCS-AOE) asked Luc onboard for their pitch, and they were awarded the project by Doha-based event company The Planners LLC.

Working together for several years now, the experienced team at The Planners combined with TCS and Trimex has become a major player in the Qatar market for these types of shows and events.

Luc was excited to be part of an all-Belgium technical design and imagineering team including OC technical director Ludo Vanstreels from Trimex with whom PWL has also worked on several previous projects. 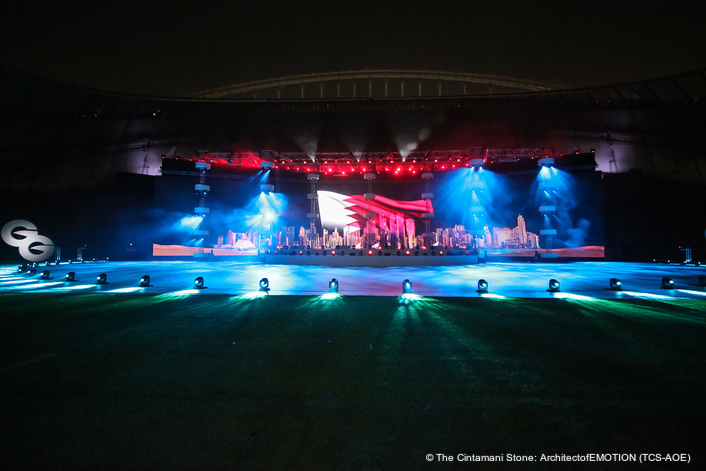 A super quick turnaround was needed to get from conception to delivery in just 4 weeks!

Challenges for Luc’s lighting design included the positioning of the stage in one section down the long end of the stadium, which meant that the whole lighting rig – and all other technical elements – had to be ground supported.

An already incredibly tight timescale for creating and producing a complex event was also shortened when the date was brought forward by one day!

Integral to the winning pitch were elaborate projections mapped onto the stage floor and holographic images beamed on a special 30-metre-wide by 12-metre-high scrim – currently a trending aesthetic in the world of eSport tournament OCs. These had to be carefully ‘lit around’, combined with several flying and ground-based cast members and performers.

Large amounts of video and LED screens to generally contend with were additional challenges for lighting.

And of course, the 25-minute show had to look awesome, spectacular and cool with all visual entities combined to produce beautifully fluid and epic results.

Luc’s design was based around seven 16-metre-high towers, three upstage and four downstage to the sides to provide a sense of depth and a basic structural framework around the 80-meter-wide oval-shaped performance space.

Upstage was the impressive 1000 plus square metre, 12-metre-high back video wall. The stage surface was mapped for projections and the holographic images were beamed onto massive special holo-scrims. 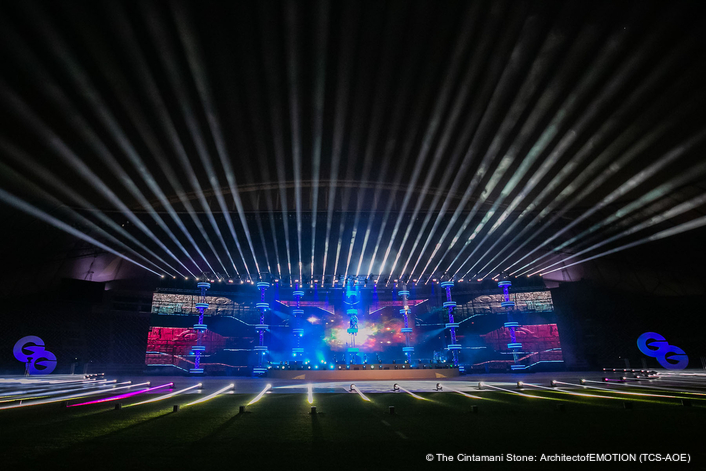 These were distributed on different levels of all seven towers, as well as along the top edge of the video wall at the back and scattered on the stage deck, giving three distinctive layers of optical attack. This was needed to work with the combination of VR and cast, including the flying characters, dancers and holographic images all integrated in the exciting collage of hi-energy visuals.

Narrating the story of how Qatar came to host the WEGA Global Games included some striking visuals fully recreating the universes from key tournament games like Street Fighter, PES eFootball, Dota2 and Counter Strike: Global Offensive, representing all the competing teams … as no footage could be cleared through the licencing process in the short timeframe.

Luc created a series of special looks with the MegaPointes to compliment the holographic characters. “They are a great fixture for this, offering multiple options for wild, crazy and off-beat effects that were perfect for this show,” he commented.

Lighting was supplied – along with audio, LED screen, ground support trussing, vari-speed motors for performer flying, general rigging and trussing – by the Doha branch of mediaPro International who also built the stage. The stage was built by The Planners’ in-house decor team.

In addition to the MegaPointes, there were 60 x Robe Spiider LED wash beams, 36 x Cyclops LED washes, 50 x Claypaky Mythos and 42 CP Scenius Unicos which were used to highlight cast positions from the sides and for illuminating specific parts of the projection areas. 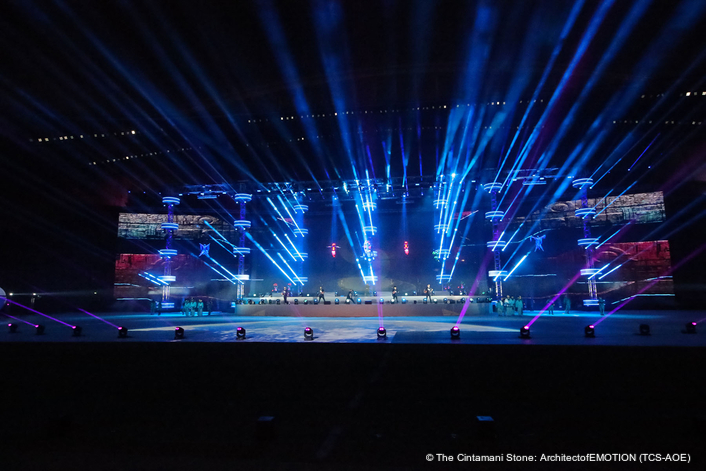 Much of the general lighting came from the sides as front lighting was minimal – just four fixtures – so not to spill onto the holo-scrims.

Claypaky Stormy LED strobes plus beam lights and a variety of other available fixtures all added up to over 500 light sources ... not a massive rig to fill a stadium, but each one of them was worked hard and used in a truly multifunctional context! Their collective flexibility together with Luc’s imagination and the programming skills of his associate LD Raphael Demonthy and lighting programmer Sebastian Huwig on site, ensured some eye-popping cues in the grandMA2 consoles.

Due to the short turnaround time, once the initial design proposals were accepted, Luc WYSIWYG’d the stage and lighting in PWL’s studio in Genk, Belgium, a process that involved intense and constant communication with Steven Martin and Ludo Vanstreels.

Ludo comments, “Luc and I have known each other and worked together for over 25 years, and this synergy and understanding was a huge asset on this project due to the very short notice.”

Luc created his lighting design with the equipment that was available in the region at the time. Working in WYSIWYG gained them considerable time in the production phase with Luc and Ludo working on one master file – into which Ludo was adding all the technical equipment whilst Luc was drawing all the lights.

During the installation period, the two were in direct contact in order to adapt things quickly if necessary.

“It was great working with Luc and his colleagues again on this challenging time-pressured event” concluded Ludo.

A site visit was not possible for Luc in the timeframe, however, Ludo, Steven and Jo Pauly from Visual Solutions all visited, and Steven’s team produced a complete mock-up and storyboard of the show with soundtrack. This provided an extremely accurate visual impression, allowing all the basic lighting building blocks to be assembled remotely and shared between the various creative and technical departments … as their own areas were simultaneously developed. 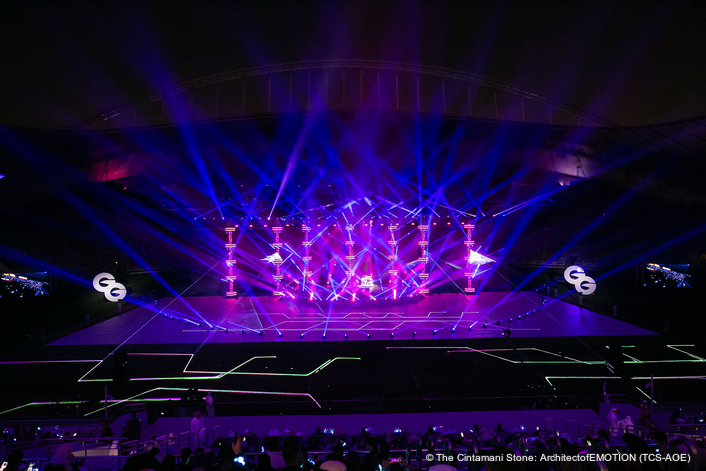 The video elements were assembled, coordinated and controlled by Jo Pauly ... another highly regarded practitioner with whom Luc and PWL have a great working relationship and a track record of other demanding projects. The video content was created by Pix & Real and Prismax.

Music was compiled by Tino Plettinck with the support of Universal Production Music. A team of about 40 performing talents and five show runners were flown in with the TCS team.

“Having all these resources to hand plus everyone’s talent, experience, vision and passion onboard helped enormously in pulling a complex and high profile show together under a lot of pressure,” commented Luc, who was delighted with the results and very proud to have been part of producing such a great looking show.

“Many said it could not be done in such a short time, and yet again … our team nailed it!” was the proud feedback of Steven after the show.

“You need three things to achieve this with such a short notice: a good idea and vision to start with, but most importantly the right talented and skilled people around you - and they need to be ready to step on board immediately and take on this huge challenge just before the Christmas holiday period!  I had those people to support me: the best of the best!

“The end clients’ reaction was amazement with how we pulled everything together with such detail in such a short period of time.”

It kicked the WEGA Global Games season off to a brilliant start. 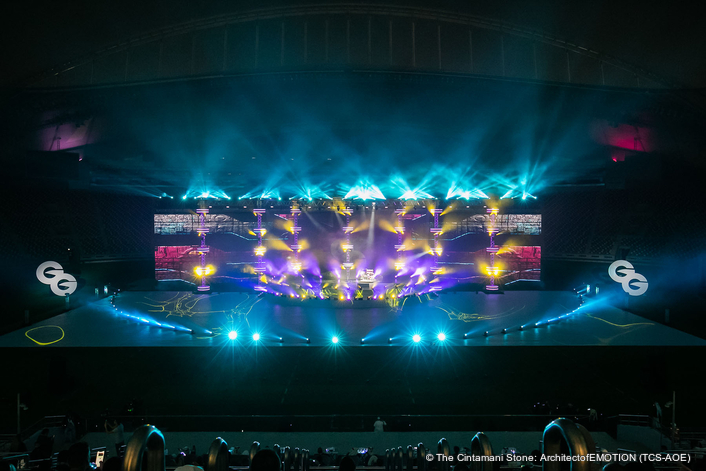 The ticketed OC event was completely sold out and launched this first edition of The Global Games, hosted by Aspire Zone Foundation and organised by Truxtun Capital. The event is a unique multi games competition featuring CSGO, DOTA2, Street Fighter V, and the eFootball PES series. This Grand Opening Ceremony in Doha was the first of four big moments in the calendar and is followed by the WEGA Champions™ in March 2020: a world-wide online competition starting September 2020 and the QATAR Esports WEGA Global Games™ and Global Games Great Final™ in December 2020.