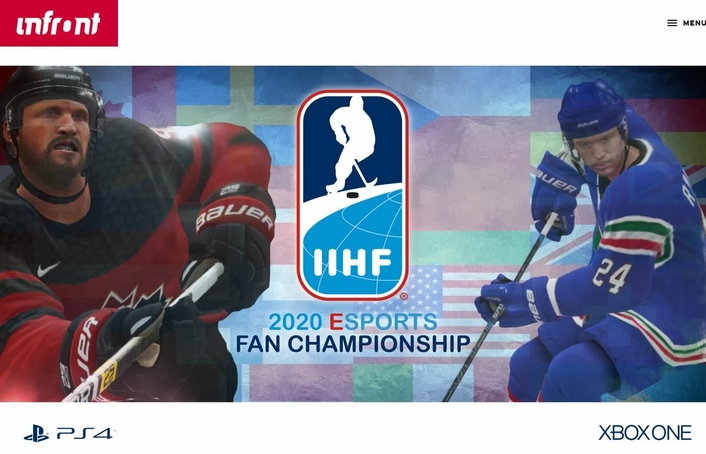 Infront, a Wanda Sports Group company and the exclusive media and marketing partner of the International Ice Hockey Federation (IIHF), will launch the IIHF Esports Fan Championship on 15 May in cooperation with eSport Studio, one of the leading esports companies in Germany.

Fans from the 16 nations which had qualified for the 2020 IIHF Ice Hockey World Championship will be given the chance to represent their country in the digital tournament, which will be hosted on a new IIHF esports online platform.

Games will be played in EA SPORTS™ NHL™ 20 on PlayStation 4 and Xbox One enabling participants to compete from home.

The first phase will consist of qualification tournaments run online from 15-22 May. Once a national PS4 and Xbox champion has been chosen they will compete in a playoff phase that will begin on 29 May, with a champion crowned on 5 June.

Both the national champions and the playoff finalists will have the chance to win prize money, hockey merchandise and 'money can't buy' VIP-experiences.

The playoff tournament will be streamed live on the IIHF's Twitch channel, making it publicly available to fans worldwide. Supporters can also follow the action on the IIHF's other social media channels.

René Fasel, IIHF President, said: "We very much value our partnership with Infront as, thanks to its growing expertise in esports, we are able to bring ice hockey action to fans' homes in a new and engaging manner. We look forward to seeing the fans create their own destiny and become stars of the virtual tournament by representing their home nation."

André Fläckel, Infront's Head of Gaming & Esports, said: "The IIHF Esports Fan Championship is a perfect example of how to leverage the potential of esports in the current situation and deliver a product that fans can get passionate about. Infront is proud to jointly work with the IIHF and eSport Studio, introducing such a promising project in such a short space of time."