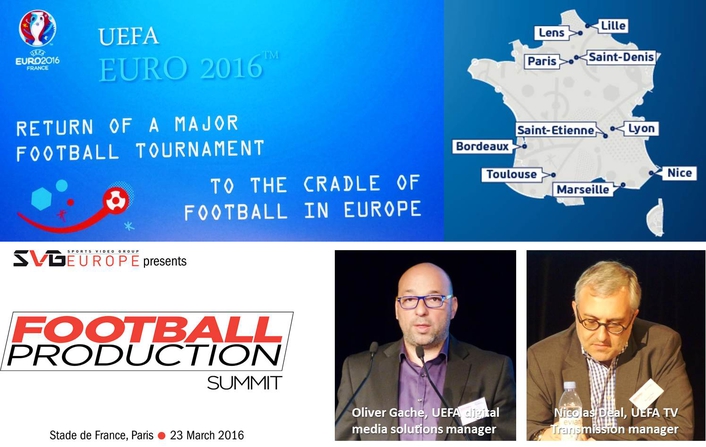 The latest edition of SVG Europe’s Football Production Summit commenced with an in-depth examination of the organisational set-up and broadcast workflow evolutions being put in place for the EURO 2016 Championships, which are due to commence on June 10. The revealing presentation was given by UEFA digital media solutions manager Oliver Gaches and TV transmission manager Nicolas Deal.

For the third time in the history of the game, France, the French Football Federation and French football as a whole are preparing to host the finals of the UEFA European Football Championship – known to most as UEFA EURO 2016. And perhaps returning to France is appropriate, as the whole idea of the Championships was the brainchild of Frenchman, Henri Delaunay. He became the first general secretary of UEFA and the trophy that the tournament winners receive is named in his honour.

The original line-up for the EURO 2016 qualifying rounds saw a record number of 54 teams take part. Those qualifiers produced the 24 teams that will take part in the finals. This increase from 16 finalists in previous tournaments means that many countries are now appearing at this stage of the Championships for the first time. 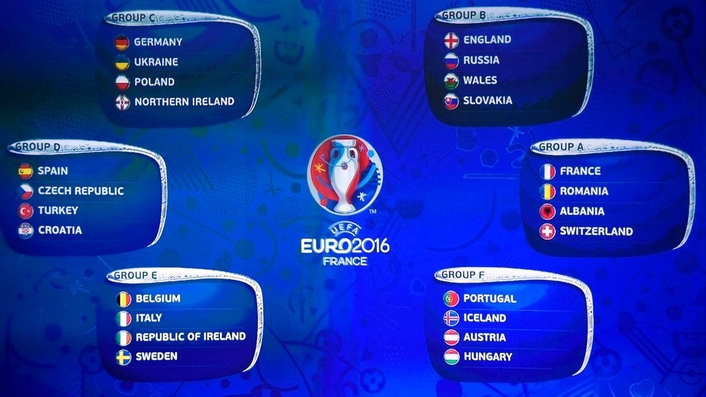 Massive Audience
Friday 10 June sees the EURO 2016 finals tournament kick off in the Stade de France, Paris with hosts France playing Romania. Over the following month, 51 matches will be played at ten host cities throughout France, with the final taking place on 10 July in the capital. While the actual ‘physical’ attendance is expected to surpass 2.5 million, the global broadcast viewership will be on another level altogether; to wit, the 2012 championships attracted more than 8.1 bn viewers. 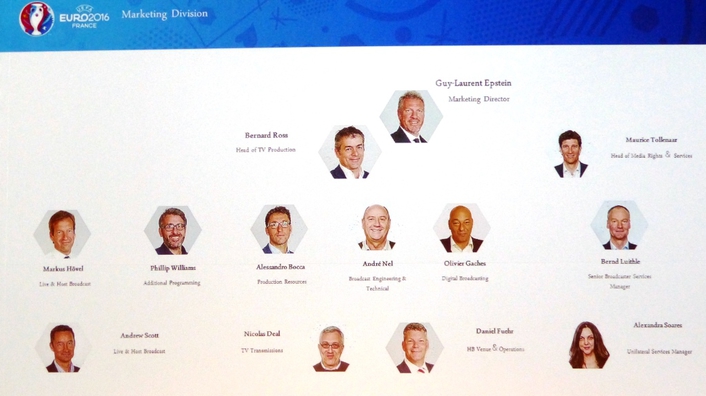 Production Concept Principles
UEFA, in its capacity as Host Broadcaster (HB), will use five Outside Broadcast (OB) suppliers for its coverage. These companies are NEP (Belgium), Euromedia (France), Telegenic (UK), AMP Visual (France) and NEP (Sweden). All replays will be housed outside the OB trucks via a centralised solution provided by EVS. 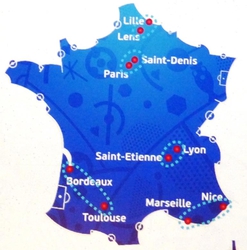 Building on the successes of UEFA EURO 2008 and UEFA EURO 2012, a minimum of 38 live match cameras will cover each game in France in High Definition (HD) and encoded with Dolby 5.1 surround sound. From the quarter-final matches onwards, 46-cameras will be the standard. These 8 additional cameras will include one additional mini-camera behind each goal, a remote robotic camera in the players’ tunnel, a remote robotic camera in the press conference room and another helicopter camera. The multilateral world feed, or Live Stadium Feed (LSF), will be available in English, with ten lead and colour commentators being used across the entire tournament. 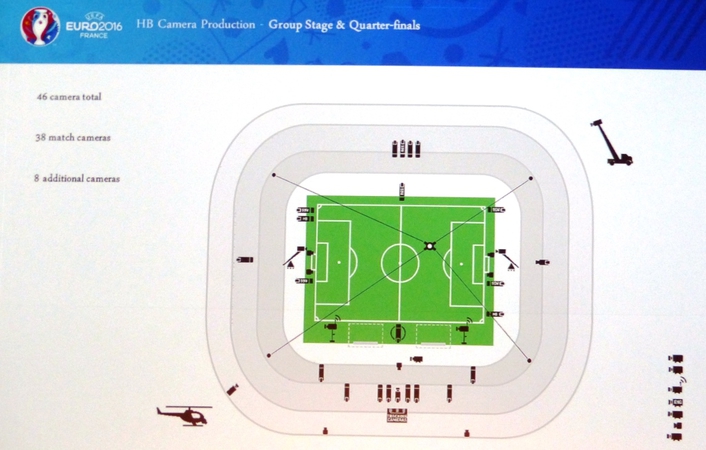 Complementing the coverage
In addition to the LSF, rights’ holding broadcasters (known as UEFA Broadcast Partners or UBPs) will have access to 11 additional feeds to enrich their coverage. These will be Camera 1, Clips 1, Clips 2, Team A, Team B, Player A, Player B, Tactical, Stadium Beauty, Stadium Aerial and 4K. Five camera ISOs will also be available: 16m left, 16m right, high behind goal left, high reverse stand and VIP venue. Other, non-bookable ISOs, will be used and made available via the two dedicated Clips Channels, ensuring UBPs have access to all the match action. Both ISOs and feeds will be available at the stadium venue or IBC. 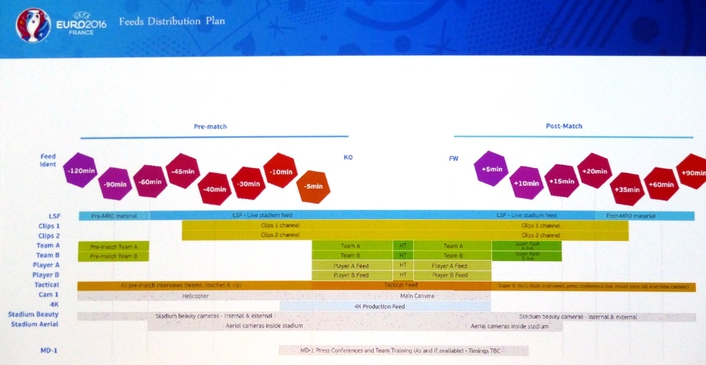 As well as the bookable feeds and ISOs, UEFA TV Production will provide broadcasters with a wealth of additional programming material to supplement their productions. This material includes raw and ‘turnkey’ content produced by the 24 dedicated crews following each team at the tournament. UEFA will also provide footage of the teams arriving at the stadium the day before the game, pre-match press conferences and post-match interviews, as well as the build-up and reaction in the host cities and dedicated fan-zones. 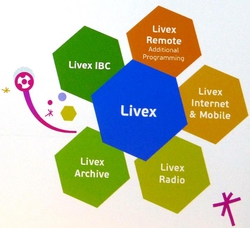 All broadcast quality video content will be delivered via the EURO 2016 Livex broadcast media server, UEFA’s content publication and distribution platform, across the purpose-built cross-France fibre network. From Livex, which is based on EVS technologies, broadcasters will have access to video and audio clips, data, graphics and statistics, as well as all additional programming content.

In 2012 the UEFA HB delivered over 11,000 booking lines for broadcasters to personalise their productions. Once again UEFA will also deliver a variety of specific bookable positions, including pitch presentation positions, announce platforms, pitch-view studios and TV compound stand-up positions. Dedicated HB venue operations teams will be based at each stadium to oversee and manage the unilateral service delivery, as well as the multilateral production.

Three aerial systems will be used at each stadium – an innovation that has been present since EURO 2008 – namely, one Spidercam, one helicopter (during the group stage, with a second added during the knock-out rounds) and an external beauty camera mounted high outside each stadium.

Player tracking systems have been deployed in UEFA competitions since the 2005/06 season, and for EURO 2016 deltatre systems will be installed at every venue.

Centre of operations
The International Broadcast Centre (IBC) is located at Paris Expo, Porte de Versailles, inside Halls 6 and 8. Construction work on the 30,000 square metre facility will begin at the end of March, with UBPs moving in from 16 May onwards. Alongside studios, galleries and commentary booths, there will be office space and edit suites. Beyond that, there will be restaurant facilities, laundry, postal services and a tourism desk. The IBC will be fully operational on 6 June 2016 and it is anticipated that around 800 UBPs and UEFA staff will operate from the IBC during the course of the finals.

The galleries will include equipment from Sony and Barco, whilst the edit suites will be equipped with Adobe systems.

HBS (Host Broadcast Services) is providing the planning and engineering for the IBC project – both in terms of the general construction and the broadcast engineering project. This includes the provision and the commissioning of a turnkey Master Control Room (MCR) and a Central Equipment Room (CER). HBS will then manage all IBC technical operations during the event, and provide and deploy Commentary Units (CUs) at all venues and support all attending UBPs.
Next to the IBC will be a satellite farm within the technical compound. This will house the uplink facilities, but not OB trucks. 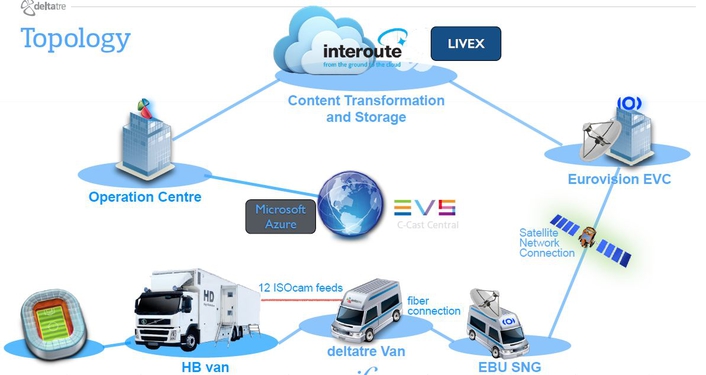 Digital offerings
Beyond the ‘traditional’ television services, UEFA is also providing broadcasters with a range of cutting-edge digital media services to ensure EURO 2016 viewers can access content from the tournament on more platforms and devices than ever before. 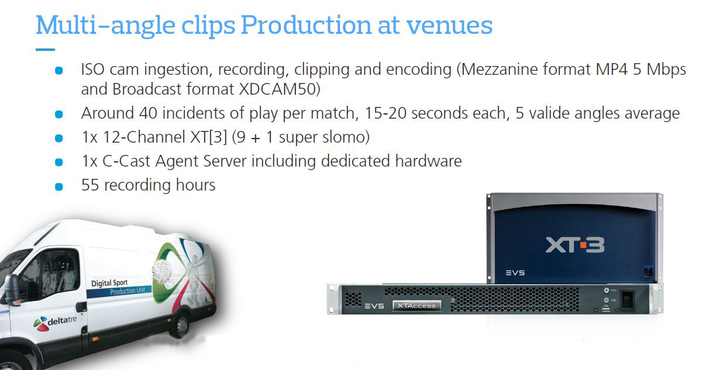 Production of the Digital Offerings by Deltatre

These services are offered to broadcasters from UEFA, via deltatre, as digital components, Software Development Kits (SDKs) and stand-alone ‘turnkey’ solutions. They include a live match streaming player and separate video streams, match-highlight clips, data feeds and VOD solutions for tablets and smartphones.

The EURO 2016 finals will be a huge undertaking, but with such a comprehensive production plan, UEFA’s broadcast partners and their millions of fans worldwide can be assured of ‘the best seat in the house’ as the thrill of the tournament action unfolds. 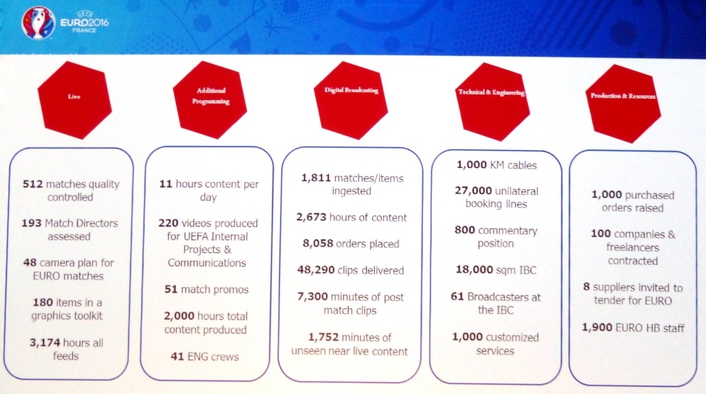