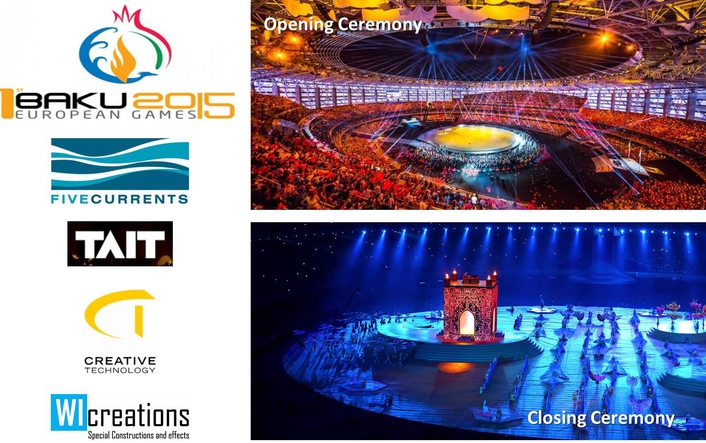 Audiences were left enthralled and entranced by two dazzling Opening and Closing Ceremonies staged in the National Stadium in Baku, Azerbaijan, for the first European Games … which saw Belgian based engineering specialist WIcreations involved in making some key elements of these innovative and beautiful shows come alive.

The Heist-op-den-Berg based company was tasked with helping create some major visual moments, including the magic (flying) carpet during the Opening Ceremony, and design and construction of three performer stages for the Closing Ceremony, complete with a Temple of Fire rising up from beneath the largest one.

“It was a fantastic event on which to work” comments Yves, “All of WI’s departments and specialist disciplines were involved, and was a real team effort. We are all very proud to have been part of the eye-catching end results”.

Flying Start
One of the Opening Ceremony Artistic Directors Dimitris Papaioannou was inspired by the Azerbaijani tradition of carpet-making for a section of the show, so a magic carpet – complete with famous Azerbaijani performer perched on top - was among the major WOW factors of the show.

WI proposed the best solution to create a realistic waving movement for the carpet as it sped through the air from the back of the stadium to the front of the Prodigal Stage where all the competing country flags were being flown.

The movement was achieved by designing and building a 12 cm high aluminium frame fitted with 42 moving arms – 21 per side – on a crank-shaft system, powered via a battery controlled DC servo motor, which sat underneath the cloth carpet and produced highly authentic flying carpet wave-like movement whilst whizzing on its journey! 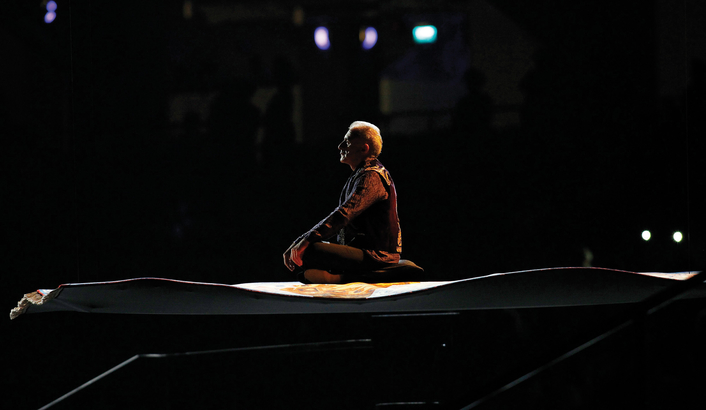 The 4 metre long by 2.5 metre wide carpet, complete with wave frame weighed under 200Kg and was picked up via four 4 mm steel wire cables and attached to a flying system engineered by TAIT.

The actual pattern on which this carpet was based is displayed in the Azerbaijan Carpet Museum and is from the family of current President Ilham Aliyev, so it was therefore vital that the flying version was perfectly replicated.

Weaving it from scratch was not practical and would have also been too heavy, so WI sourced an expert cloth printer in Belgium. Finishing the borders and the tassels were the most challenging and protracted part of this exercise, completed by hand by a master carpet-maker.

Underneath the top layer of carpet was a poly-stretch construction in the middle to provide the area on which the performer could comfortably and safely sit.

Thousands of cast members dressed in multi-coloured costumes were also used to create vivid geometric shapes on the circular field of play in the center stadium.

The largest was 2 metres high and equipped with a specially designed lifting system which allowed the Temple of Fire – a realistic scenic version of the castle-like religious temple in the Surakhani suburb of Baku – to rise up to 10 metres in the air, complete with performer on top during a section of the highly emotive, breath-taking finale. 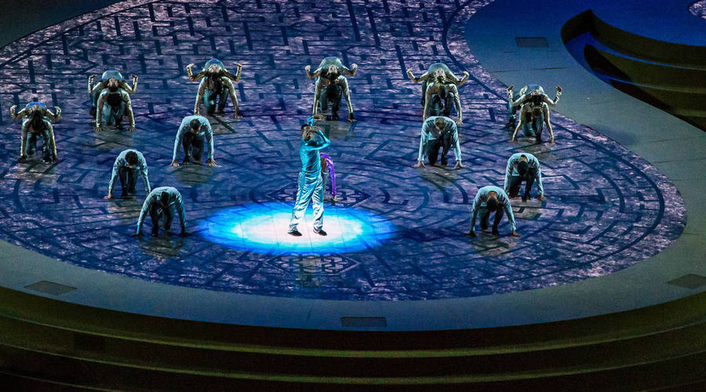 One of the three teardrop shaped performer stages

Using some of that powerful and inventive ‘WImagic’ … Yves explains how they developed four telescopic lifting systems, one in each corner of the temple, connected to trusses and with a lifting cap of 8 metres and an inner height of 1.65 metres.

The movement of the Spiralift motors raising the towers was so smooth and organic that it resembled grass growing in real-time, in the process creating some serious goose-bump moments for technical crew and audience alike.

The lifting was controlled via a Kinesys Vector system, and the four temple towers were made from double-layered fabric designed by WI in collaboration with soft goods specialist Showtex. Each tower had remote controlled flames bursting out.

WI managed to design and fit the lifting system into the stage with only 2 mm gaps to spare at the edges, enabling it to be completely concealed! Anyone watching from the higher levels of the nearly 70,000 capacity stadium or looking at the overhead camera shots on TV and admiring the stunning images shooting across the video floors – would have absolutely no idea that anything would start rising out of the stage! 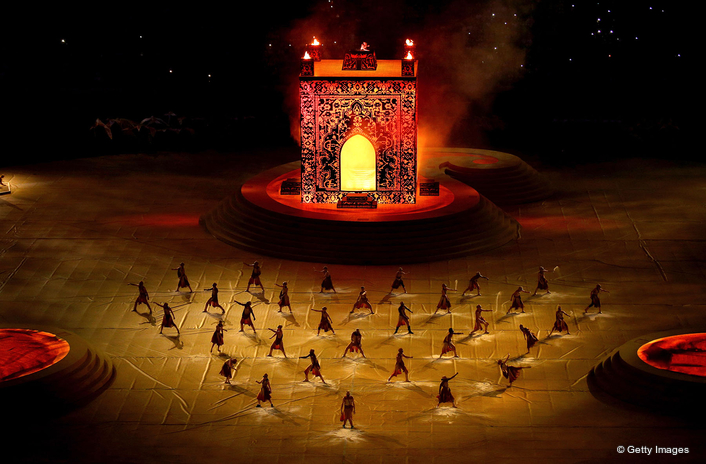 The Temple of Fire

The WI team were delighted to be involved in the opening and closing ceremonies of this first European Games, which have won much acclaim for their eye-catching vibrancy, fantastic choreography and all-encompassing entertainment value, also helping establish Azerbaijan as a contender for future world class sporting events.

Nick Eltis concludes, “It was great to work with the WI team. They took our requirements on-board and worked with us to develop the ideas and give excellent results. On site, they were efficient and a pleasure to work with, and the fire temple for the Closing Ceremony looked beautiful.”