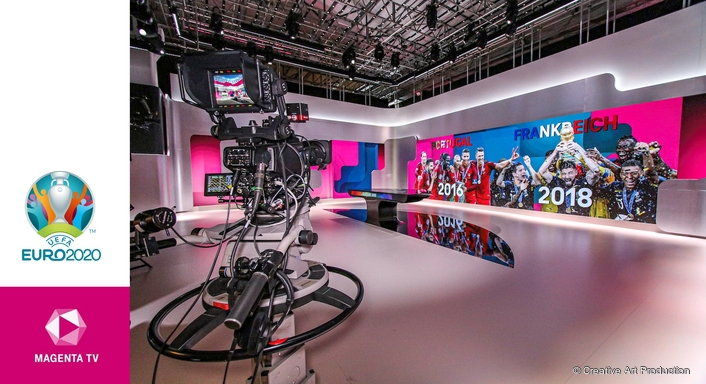 If you wanted to watch all 51 matches of the UEFA EURO 2020 on screen this summer, in Germany you had to turn to MagentaTV. All matches were offered there in UHD and Dolby 5.1. As the service provider, Plazamedia was responsible for the studio production. Bernhard Herrmann was there for our issue 9.2021 in the nerve-racking 2-2 between Germany and Hungary.

The German national soccer team met the team from Hungary in their last preliminary round match of the UEFA EURO 2020 in the arena in Munich on June 23, 2021. They needed at least a draw to advance to the round of 16.

Around noon, the Plazamedia studio complex in Ismaning, Bavaria, just outside the city limits of Munich, is covered in summery sunshine. At the compound of Plazamedia, a company of Sport1 Medien AG, three Covid-19 test stations have been set up at the main entrance to the building. Each of the up to 120 employees who are present every day must undergo a PCR or rapid test according to a scenario agreed with the health department. Anyone who has completed their test and received the negative result will receive a colored bracelet for that day, which allows access to certain studios.

Plazamedia was commissioned by Deutsche Telekom as the general contractor. A total of three studios with an area of around 2,600 square meters, four playouts and a content center are used for MagentaTV. The technical production of all 51 games took place on 22 live production days between June 11 and July 11 on two HD and two UHD channels. As a content-related program service provider, thinXpool TV GmbH was responsible for all editorial aspects of the project. Hardy Steinweg, COO of Plazamedia GmbH, welcomes us and we take a seat at a beer table set in the shady courtyard. He explains the workflows, the technology used and what Plazamedia has set up for a month on the occasion of the production for MagentaTV for EURO 2020. 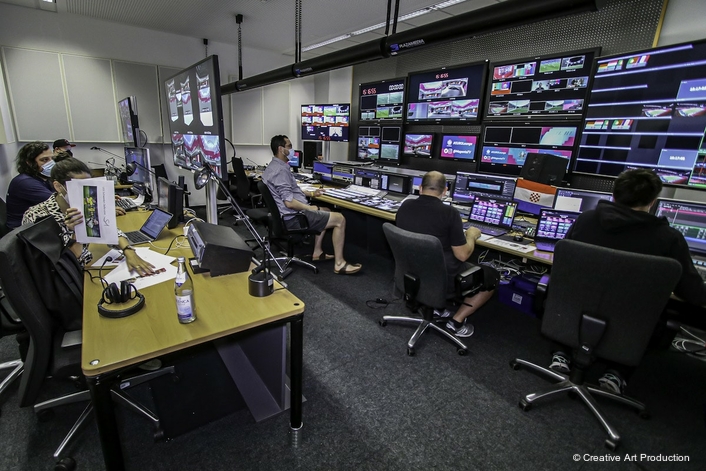 Live production area in the Plazamedia-Compound in Ismaning

The arena in Munich-Fröttmaning, where the team’s last preliminary round match will take place that day, is less than three kilometers away from the studios. Unfortunately, the German Weather Service has already issued a severe weather warning with thunderstorms and heavy rain for the kick-off of the game, which is nowhere to be suspected with the Bavarian white-blue sky still prevailing. Gradually, the employees from the various trades arrive at Plazamedia.

Augmented Reality and 3D graphics in the studio

In Plazamedia Studio M, a 250 square meter action area was available for MagentaTV programs. A 60 square meter LED video wall in 32: 9 format served as backdrop and was feeded with a Pandoras box system from Christie as a media server. The curved, black presenters desk in front of the video wall with monitors embedded in a semicircle was based on the Telekom logo.

The U-shaped, light gray and silver-colored wall elements with various large curves at the corners were mainly kept in Deutsche Telekom's CI color magenta. Two white circumferential light strips indirectly illuminate the rear and side walls above and below. In addition to around two dozen spotlights, points the size of a tennis ball made of reflective film stand out on the ceiling of the studio. These belong to the Mo-Sys StarTracker system, where an LED sensor is attached to each of three studio cameras. This is used to calibrate the position and orientation of the camera. Rotation and lens data are determined exactly. This data is sent to a rendering engine so that a virtual 3D graphic can be integrated into the 2D TV image as an augmented reality element.

The central equipment room was housed in an external container

With the help of this system, VIZRT graphics could be faded into the TV image as an animated steel frame of the roof of the Munich arena in the studio image, giving the impression that you were actually there. The transition from the real studio wall to the virtual roof consisted of the familiar real, but now virtual, wall elements in magenta color. In some scenes of the program, the graphic designers had pushed the high-contrast combination of studio colors in the virtual representation a little too far, so that the complementary colors no longer matched each other. The reflection of the color yellow from the virtual German flag even gave the presenter and an expert a yellowish color in the TV picture.

All of UEFA's on-air graphics were produced by Deltatre in UHD, assigned to the live stadium feed and made available to broadcasters for their own superimpositions. The respective statistic datas were recorded and distributed by Deltatre in the stadiums.

Five UHD-capable Sony HDC 3500 with Fujinon HD Boxed 24x and Fujinon EFP wide-angle 14x lenses were used in the MagentaTV studio. Three cameras were on pump tripods. This setup was supplemented by a camera crane and a steadicam. The moderators were equipped with headband microphones and in-ears. 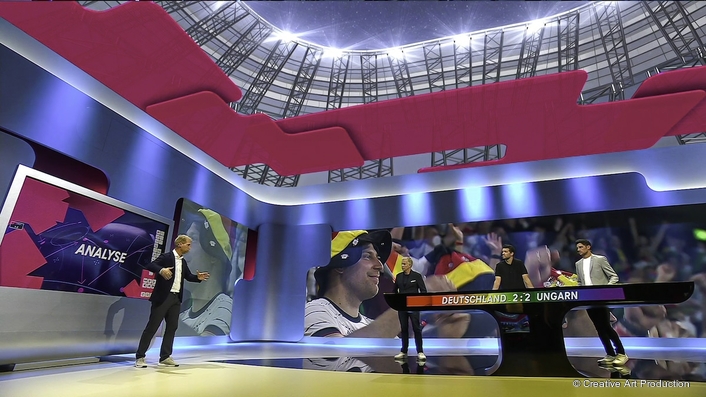 The LED screen and AR control were particularly important for additional information and the virtual extension of the studio.

For the MagentaTV analysis on the “Magic Wall”, expert Jan Henkel used a 100-inch UHD touchscreen with a Piero Sport graphics analysis system from Ross Video. He used various graphic 3D elements and markings to explain game- and goal-deciding scenes with routes and positions on the field that had previously been selected for analysis from the live stadium feed and saved locally. This enabled for instance goals to be explained at half-time on a sport-professional level (that did not require a trainer seminar for viewers, as was sometimes necessary for other TV stations). The sports graphics and analysis engine also offered everything to display the actions in video scenes frame by frame and to provide them with a large portfolio of graphic elements.

In front of the Plazamedia building, two OB vans from NEP were deployed, the control rooms of which were used as UHD broadcasting controls for the handling of the live games. Graphics, comments and contributions were added there during the game broadcasts. The central equipment room (ZGR) was housed in a container also in front of the building. In the permanently cooled interior there were racks with analog and digital technology up to the ceiling height: the central hardware of all systems for MagentaTV production, such as image mixers and routers, mainframes, processors, intercom central unit as well as the base stations and CCUs of the cameras. In addition, there was a central infrastructure for video feeds and recordings, which are linked directly to the large network storage systems also installed there for the event. The channels for the two MagentaTV EURO 2020 channels were four program transmission lines from Plazamedia for distribution towards the platformers at Deutsche Telekom, two each in UHD and in HD.

The world feed from the stadiums was produced with about twice the number of cameras as is usual for international football matches and was produced everywhere in UHD HDR. In each of the eleven stadiums, at least 36 UHD cameras with UHD optics were used for the live reporting, including eight super slow-motion triple-speed cameras, two high-speed cameras, two cameras between the goalposts, five handheld cameras, one camera on a helicopter and a spidercam. This image offer was supplemented by eight further UHD cameras, which showed all other events related to the game, such as the arrival of the teams in the arena and the reactions of the fans. With this powerful camera portfolio, all the scenes on the square and the emotions in the audience could be captured, live, re-live, as slow motion, super slow motion and from different perspectives and settings from large to super total.

All of UEFA's host broadcasting activities were brought together at the International Broadcast Center IBC near Amsterdam, including live images of all 51 games in this year's European Championship finals from the eleven stadiums, which were broadcast on the official television and streaming channels. A total of around 1,000 employees worked there on an area of around 26,000 square meters, including almost 300 from UEFA Host Broadcasting. UEFA produced 18 signals per game, including the Live Stadium Feed called “World Feed” in HD-SDR, HD-HDR and UHD-HDR. A total of more than 70,000 kilometers of cable were required for this, 150 kilometers of which in the IBC. The length record is held by an existing fiber optic cable between the stadium in Baku and the IBC with a length of 6,500 kilometers.

Plazamedia COO Hardy Steinweg was completely satisfied with the EURO 2020 production. “The whole team with a total of 250 colleagues who staged this project for MagentaTV is one of the winners of this European championship! The production of the UEFA EURO 2020 was an outstanding success thanks to the intensive and trusting cooperation of all partners and service providers involved. The EM project was carried out in the established compound on our company premises in Ismaning State-of-the-Art realized with the latest technology: In addition to the consistent UHD signal processing, extensive augmented reality features, high-end analysis systems and the latest camera and image technology were used in the studio productions. On this basis, a real added value was created for the viewers of MagentaTV - this is also shown to us by the reactions in the media and the public”, he concluded.

The “home game” of the MagentaTV team for the UEFA EURO 2020, produced by Plazamedia in Ismaning, ended with a victory for the transmitted picture and sound quality in UHD SDR and Dolby 5.1 for 20 million German households in which UHD TV stand. With ARD and ZDF, however, the broadcasts ran in "HD ready", ie in the format 720p / 50 (1,280 × 720 pixels) via cable and satellite with Dolby 5.1 sound.

“There is no migration scenario for the cable and satellite distribution channels to switch from the current broadcast standard 720p / 50 to 1080p / 50. In addition, some selected events are offered in Full HD / HDR in the ZDFmediathek via HbbTV, ”notes the ZDF Second German Television. "For EURO 2024, the previous HD or Full HD signal will certainly still be offered via the classic broadcast channels," added a spokesman for ARD First German Television. 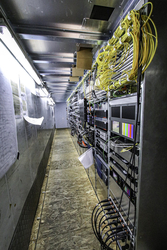 The goal for the 2022 FIFA World Cup and the UEFA EURO 2024 would have to be to give German viewers the opportunity to watch the games with the participation of the German team, the quarter and semi-finals and the final in UHD HDR and Dolby Atmos without double payment through broadcasting fees and MagentaTV - to offer a subscription. In terms of quality, MagentaTV could then become the first alternative to ARD and ZDF.