Eurosport Olympic Legacy Is About More Than the Games 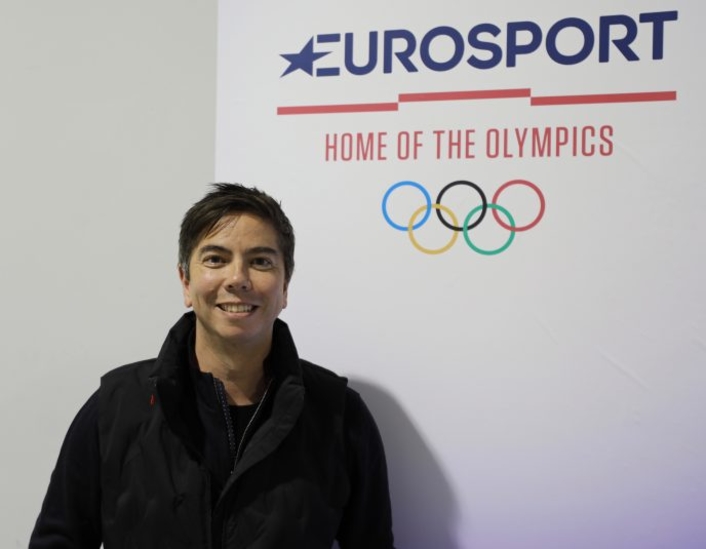 The new rightsholder is a massive UN of sports production, delivering the Games to 48 countries in 42 languages

Eurosport’s ambitious plans for the 2018 Winter Olympics are now in Day 6 of being in full operation, and Discovery Communications CTO John Honeycutt says that the team has been fantastic and, for the first week of the Olympics, things couldn’t be going better. “My biggest concern was, we would have some issues in the first couple of days and then we would never emotionally get out of that hole,” he says. “But we had a really strong opening weekend. and the viewer numbers coming back from the regions have been spectacular. So I feel really good about the performance and the team.”

David Schafer says the Eurosport efforts for the 2018 Olympics will create a legacy that extends beyond the Olympics.

David Schafer, SVP, Olympics operations and planning, Discovery Communications, concurs, adding that the team expected some bumps because Eurosport and the team had never taken on such an ambitious project or really worked together so closely.

“We were prepared for any angle and for anything that could go wrong,” says Schafer. “So, we prepared for those and I think the teams have reacted accordingly. And you can see it on air.”

The Eurosport team is a massive United Nations of sports production that ultimately is responsible for delivering the Olympics to 48 countries in 21 languages. Schafer equates it to a U.S. national network having production teams across every state and then each state’s team requiring different feeds with different languages.

“If you think of it in that regard it is quite complex,” he says.

There is a multi-national team in PyeongChang at the IBC and at the venues; another large team in Paris, where Eurosport is headquartered; a team at NEP’s Mediabank facility in Oslo that logs and stores all assets and, in turn, makes them available to editors and other production teams across Europe; and then there are Eurosport operations across Europe that giving content a more local flair.

Eurosport’s facility within the IBC has seven production control rooms, including one each dedicated to Sweden and Norway, busy pulling in content from 28 OBS feeds, unilateral feeds from venues and beyond.

“There has been a lot of rapid decision making and load balancing across the team, but we have a great group of people who raised the production up really quickly,” says Honeycutt. “It’s a complete and total host feed operation with unilateral wraparounds and it is all flypacks from NEP.”

Some of the key tools keeping everything connected and moving include Lawo V_remote 4 for moving IP signals, EVS replay servers, ScheduALL as the brain of the operations, and Vizrt for the Cube AR studio.

Then there are production teams focused on specific nations, like Germany, Italy, England, Norway, and Sweden. 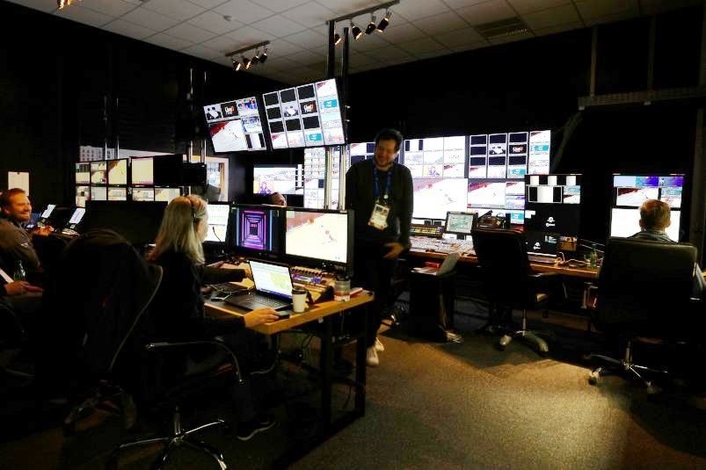 “When you look at our model we are across various platforms: free-to-air, pay, and digital,” says Schafer. “And the free-to-air markets where we own those rights and have not sublicensed any of them are where we have invested significantly in the infrastructure. And Norway and Sweden were those two countries.”

In those markets Eurosport was taking over for commercial broadcasters in both countries that were known for high levels of production. That meant the Eurosport teams had a lot to prove with viewers in those markets.

“We really went all-in to give them all the resources they needed to deliver on that promise,” he says. “And that is why you will see control rooms from Norway and Sweden, significant sized studios, and the most people on site.”

In recent months Eurosport has worked hard to find common needs and economies of scales that can be leveraged across the various production teams that are serving local needs.

“If you look at the core teams from all the markets, there has not been one market that was not engaged or passionate about this since day one,” says Schafer. “And they all have other day jobs as well as with all of our other sports coverage and we were able to help them along that path. But coming into the games, when they were able to completely focus on it, they have delivered beyond my expectations and I think that just watching them come together, get on air, and the hosts and producers and everyone showing up in PyeongChang and rolling up their sleeves together has probably been the most rewarding thing for me at these Olympics.”

Now that the games are under way and the teams are on site there has been an uptick in sharing of content, leveraging assets, and more. The result is an effort that finds what began as diverse teams working closer than ever.

“Now that people are sharing [content and resources] we are working as one team because, naturally, you would think there would be some tension between teams,” says Schafer. “But I have not seen it and I strongly believe that comes back to starting this project together.”

Schafer says that when he first tackled the project the first step was to make sure every stakeholder and market was part of the journey. 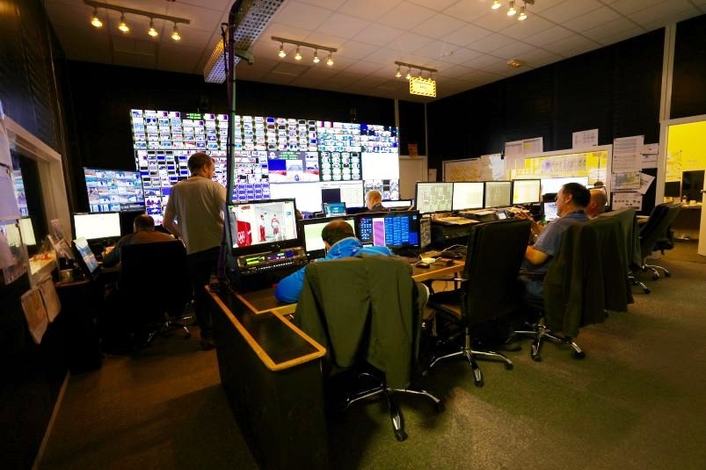 The Eurosport Broadcast Operations Centre is a beehive of activity during the Olympic games.

“At the first World Broadcaster Meeting every market was there, and we also had workshops along the way,” he says. “And that bond has just grown since that first World Broadcaster Meeting because they didn’t have someone telling them what to do. They know how to produce things because they know their audience and they know how best to reach that audience.”

Ultimately, he says, the Olympics effort is about raising the production value of what Discovery and Eurosport.

“I think that bar is going to get higher and higher and we’re ready for it,” he says.

The legacy the 2018 Winter Games will have on Eurosport is still being defined and Schafer believes it will be about more than the 2020 Tokyo Games.

“I think we’ll see a lot more sharing because we’re building the technology behind that with Mediabank and other things,” he says.

“Another legacy will be the overall production value. At our other events we send out different crews and studios but at this one we are doing unilateral coverage like we haven’t done before at some of the venues. When you look at hockey, with Sweden and Finland, we’re actually enhancing the feeds to feel more localized by adding our own unilateral cameras for covering the field of play.”

And then there is the legacy that is a result of new systems and processes that were created for the Games but will remain in place. For example, a system called Ignite was built to manage the crew, hiring, travel, and more.

“We didn’t have a lot of time, but we built it from scratch and built it for the core business after the Olympics,” says Schafer. “And then there is our Delphi system that holds all of the documentation from OBS and then our own documentation of unilateral coverage, our own camera grids and mixed zone information. We have every intention of bringing those systems over to our core business and enhancing it for Tokyo.”

Every day has provided a chance for the Eurosport team to step forward and bring some new energy and perspective to an Olympics production.

“Our promise to the IOC and to our audience was innovation, so there were a lot of teams working together, whether it was the digital or linear teams,” says Schafer. “And everyone was eager to deliver on that promise.”

One way the team did that was the construction of The Cube, a studio with augmented reality that was the vision of Stefano Bernabino, VP of Olympic Production at Eurosport. 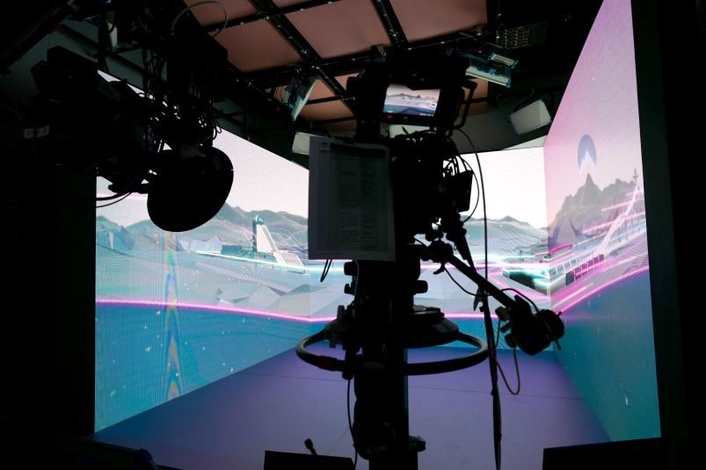 "Our central production team in Paris led by Stefano and his team came up with a fantastic concept to try and use new technology like AR for sports analysis,” says Schafer. “And it is not only for delivery on linear, which was the traditional way of doing sports analysis, but also on digital in a short-form manner.”

A team effort led to The Cube becoming reality and it is now creating a buzz all its own.

“Every day we see more and more folks on the schedule, whether it’s our commentators who are experts and are very excited about it or athletes,” he says. “When Shaun White walked in to it he was wowed and really got into it and watching the analysis of his run from yesterday.”