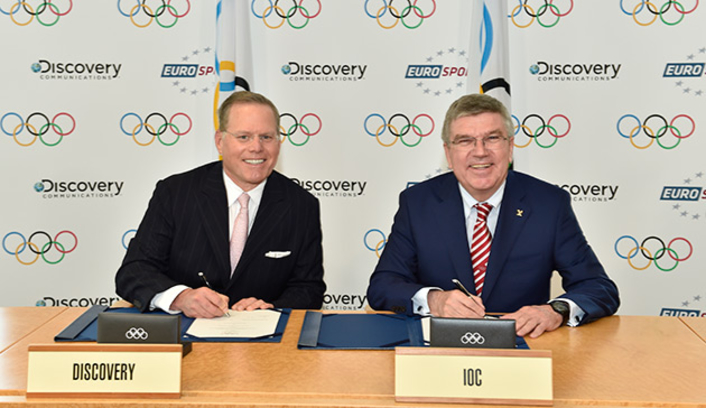 Discovery Communications president and chief executive David Zaslav with IOC President Thomas Bach
The International Olympic Committee (IOC) has confirmed that all TV and multi-platform broadcast rights in Europe for the four Olympic Games in the 2018–2024 period have been awarded to Discovery Communications, the parent company of Eurosport.

Discovery chief executive, David Zaslav, told the Guardian that it would negotiate with the BBC and other broadcasters in the UK, France and Germany over potentially sub-licensing some of the rights. “Part of our approach will be to strive to work with some of the best Olympic broadcast players. The BBC will have the chance to sub-license some of the rights. We’ll open up those discussions in every market.”

Discovery has paid €1.3bn for the deal which will see the winter and summer games shift from many public broadcasters in 2018 and from those in France and UK in 2022.

With an average of 10 channels in every market and the #1 European online and OTT sports offerings, Discovery and Eurosport aims to deliver more coverage across more screens than ever before to over 700 million people across Europe.  Discovery and Eurosport’s coverage will be augmented by strong free-to-air access and partnerships with broadcasters and distributors.

IOC President Thomas Bach said: “This is a significant agreement for Discovery and the IOC, and we are excited to have Eurosport, the pan-European home of Olympic sports, as a partner. This agreement ensures comprehensive coverage of the Olympic Games across Europe, including the guarantee to provide extensive free-to-air television coverage in all territories. Discovery and Eurosport have demonstrated a major commitment to the Olympic Games, to Olympic sports and to the future of the Olympic Movement. The revenue generated from this long-term partnership will be redistributed by the IOC across the Olympic Movement to support the development of sport around the world. Discovery and Eurosport have also made an exciting commitment to partner with the IOC to develop the new Olympic Channel across Europe. Above all, this agreement ensures that sports fans in Europe will be able to enjoy excellent coverage of the Olympic Games and Olympic sports, both during and outside Games time, on their platform of choice.”

Discovery’s Zaslav added: “Today is a historic day as we proudly add the Olympic rings to Discovery Communications’ portfolio of offerings. The long-term programming commitment with President Bach and the IOC reaffirms Eurosport’s position as the leader in sports across Europe, and will significantly enhance Eurosport’s presence on all platforms. With Eurosport’s proud and long-standing tradition of broadcasting many winter and summer sports showcased during the Olympics, adding the Olympic Games, the greatest live event in the world, is a perfect editorial and strategic fit. But most of all, this new partnership is an exciting win for European sports fans as we will deliver record amounts of content across platforms to ensure the Olympic flame burns bright all year long.”

Discovery acquired the exclusive rights across all platforms, including free-to-air television, subscription/pay-TV television, Internet and mobile phone in all languages across 50 countries and territories on the European continent.  Consistent with IOC and local market requirements, Discovery has committed to broadcasting a minimum of 200 hours of the Olympic Games and 100 hours of the Olympic Winter Games on free-to-air television during the Games period. Discovery will sub-license a portion of the rights in many markets across Europe.

The agreement covers the XXIII Olympic Winter Games in PyeongChang in 2018, and the Games of the XXXII Olympiad in Tokyo in 2020, as well as the Olympic Games in 2022 and 2024, the host cities of which have yet to be elected.

Speaking at the FT Digital Media Conference in London in March 2014, Zaslav said that the broadcaster’s acquisition of Eurosport had given it the opportunity to create a bigger and better service, and admitted that it would consider acquiring premium sports rights, now that it had the ability to go “deep and agressive” in a particular market.

Russia is excluded from the agreement, while the deal applies to the 2022 and 2024 Games only in France and the UK.

Olympic Games 2012 in London - A Review
Review Sochi 2014: Broadc...he Games Across the World
The Broadcasting of the Vancouver Olympics