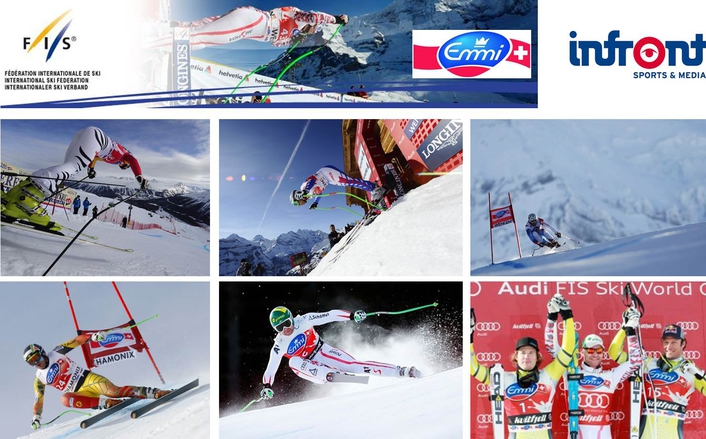 Success of the initial three years in the prestigious winter sports series made the dairy brand prolong until 2015/16
Emmi, Switzerland’s leading milk processor, has extended its international sponsorship involvement in the Audi FIS Alpine Ski World Cup ahead of time. The new contract directly follows the current one, running from the 2013/14 to the 2015/16 season. It was closed with Infront Sports & Media. The international sports marketing company markets the advertising and sponsorship rights to the majority of FIS Alpine Ski World Cup events on a collective basis.

After the successful initial three years of sponsorship, the extension of the involvement was a logical next step for Emmi as part of its sustainable brand communications and international marketing approach. The agreement entitles Emmi to be at the heart of the action during the most important FIS Alpine Ski World Cup events in Switzerland, Germany, Austria, Italy, France and Norway – including prestigious races such as Adelboden, Wengen or Cortina d’Ampezzo.

Nicole Laager, Group Brand Manager of the Emmi Group, said: “The impact of our involvement in the FIS Alpine Ski World Cup in terms of worldwide visibility has completely fulfilled our expectations. The feedback we received in regards to this sponsorship further underlined that the association between our brand and this winter sports series is being made. Infront’s approach in allocating and implementing the sponsorship has contributed to this effect and builds an ideal base for us to move forward on this successful path and strengthen the connection between our brand and the series.”

Bruno Marty, Infront’s Executive Director Winter Sports, said: “Competitive skiing has a long heritage in Emmi’s home country Switzerland – a fact that further supports the authenticity of the company’s brand communication in the FIS Alpine Ski World Cup environment. The serial character of the competition, its attractive audience demographics as well as its wide reach with more than three billion cumulative viewers ensures that Emmi effectively reaches its target groups in Central Europe and other key skiing markets.”

The agreement is based on a clearly structured and consistent marketing concept for the FIS Alpine Ski World Cup that Infront introduced in 2009. It provides seven international partners per race with high visibility at clearly defined sections along the ski run. This high level of exclusivity, combined with a consistent venue dressing along all the races, further contributes to the impact of each sponsor’s brand messages onsite as well as on the TV screens worldwide. The Emmi brand will be visible on banners and boards in prime locations of the course, within the start and finish areas as well as on athlete’s bib numbers.