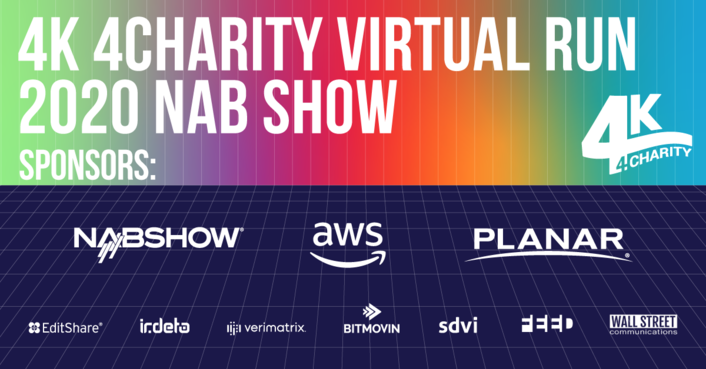 A new virtual version of the 4K 4Charity Fun Run traditionally held in collaboration with the NAB Show concluded this week, with sponsors and supporters raising over $21,000 in net donations for organizations that provide COVID-19 relief and non-profits focused on increasing diversity and inclusion in the tech industry. Today, 4K 4Charity Fun Run event organizers also confirmed the virtualization of the entire 2020 series of 4K and 8K runs, including those planned for the IBC Show in September, a community event in Portland, Oregon, and the SMPTE Annual Tech Conference in November.

The first-ever virtual 4K 4Charity Fun Run took place between April 21 and June 1, and attracted hundreds of supporters representing 158 companies across 24 countries. Virtual event registrants signed up for a 4K (2.49 mile) or 8K (4.97 mile) distance and completed a route of their choice at their own pace, whether that was on one day or across several days. Participants shared their unique 4K 4Charity journey with the online community on Twitter, Instagram, Facebook or LinkedIn with social tag #4K4CharityVRun and were mailed a finisher’s packet at the conclusion of the event period.

“Congratulations to all our sponsors and individual supporters! You have made an impact—and history by completing our first-ever 4K 4Charity virtual run. And while we missed seeing everyone in person, it was inspiring to see the many creative ways participants completed their 4K or 8K distances, from using furry, four-legged friends as pace setters to running with abandon through a sunny field wearing an inflatable dragon costume. Thank you for setting a new pace for our industry with your commitment and your generosity. We look forward to seeing you at an upcoming virtual run soon—and keep sharing your pictures and videos with the online community,” said Laura Barber, co-founder of the 4K 4Charity Fun Run Series.

A portion of proceeds from this 4K 4Charity virtual event benefit UNICEF, who is on the ground in more than 190 countries, partnering with front-line responders to keep children healthy and learning, and protected from sickness and violence. The event also raises funds for the National Center for Women & Information Technology (NCWIT), which builds a more equitable industry by teaching programming to K-12 girls and inspiring Latinas to pursue careers in tech.

About the 4K 4Charity Fun Run

Founded in 2014, the 4K 4Charity Fun Run Series is a 4K (2.49-mile) and 8K (4.97 mile) running and walking event held annually in Las Vegas (NAB Show and AWS re:Invent), Amsterdam (IBC Show), Los Angeles (SMPTE Annual Technical Conference & Exhibition) and Portland, Oregon. The event raises awareness and financial support for global and local non-profits that support increased diversity and inclusion initiatives. The 4K 4Charity Fun Run makes it easy for participants and sponsors to get active and give back. https://4k4charity.com