30,700 guests celebrate and cheer during the FIS World Cup weekend in Adelboden 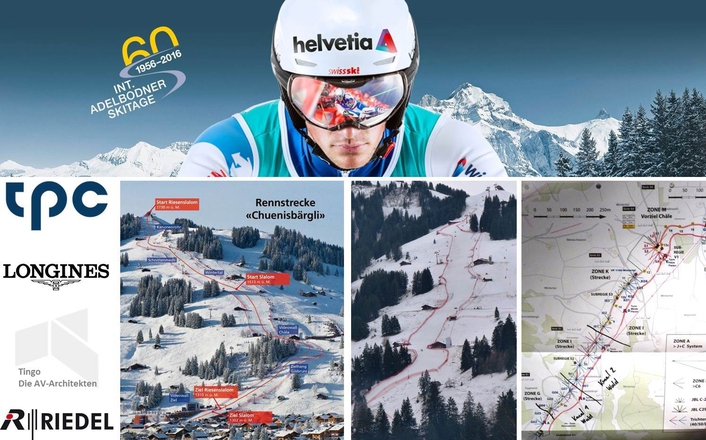 The Chuenisbärgli (also Kuonisbergli) is a mountain in the Bernese Oberland. It lies above the village of Adelboden and is known as one of the venues of the FIS Alpine World Cup races. The first Adelboden ski days took place already in 1955, before they became part of the FIS Ski World Cup in 1967.

The slope at Chuenisbärgli is considered as the most difficult giant slalom course of the World Cup for men. Both the starting piece and the final slope are extremely steep. Since the year 2000 also slalom races are part of the World Cup weekend in Adelboden.

The start of the giant slalom is 1,730 m above sea level, the one for the slalom at 1,513 m. The length of the giant slalom is 1,290 meters, the length of the slalom 622 meters. The finish area is located at an altitude of 1,302 m. With around 30,000 spectators along the route and on temporarily constructed stands at the finish area, the races in Adelboden are among the most visited ones in the world. 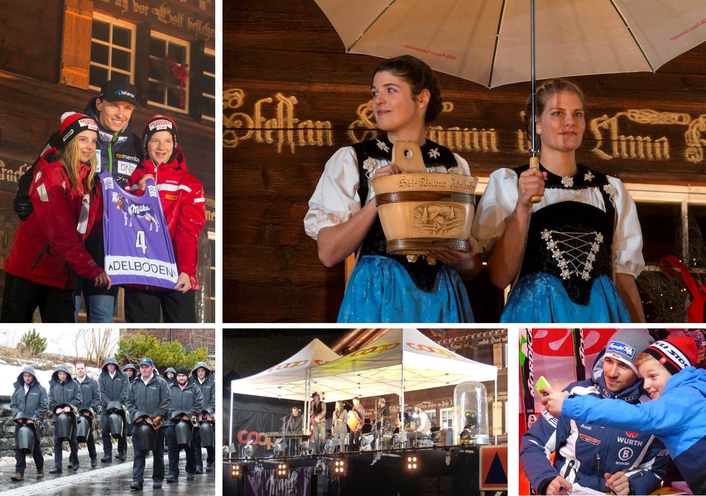 The Evening before the Race

At the traditional Longines media event on Friday evening, the Ski World Cup Adelboden AG bestowed the Media Award for the 9th time on the Tschentenalp. It was awarded to the Swiss Radio and TV broadcaster SRG and the related production house tpc.

The awards were received by Hansjürg Holliger for tpc Production, Beni Giger for directing the races since more than a decade and Karin Nussbaumer, deputizing for the SRG/tpc administration. 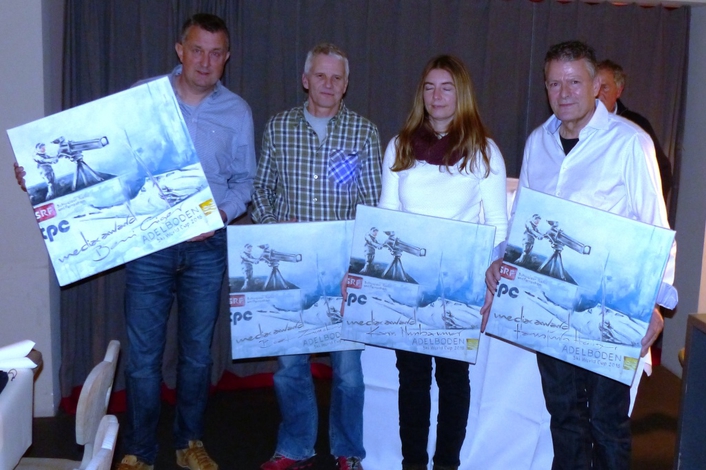 The presentation speech was held by Councillor Beatrice Simon-Jungi. She paid tribute to the SRG as a transmitter of the Ski World Cup Adelboden and to tpc and SRG as host broadcaster, delivering an excellent quality of the television signal and make it available to rights holding television stations world-wide. 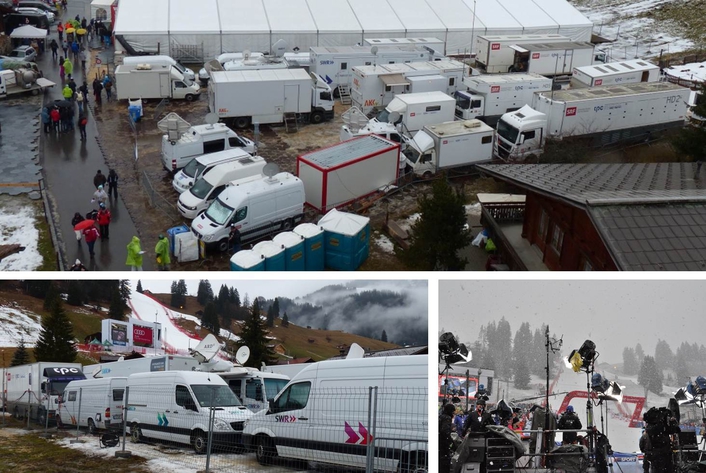 The TV Compound in Adelboden

This year tpc installed 16 TV cameras to cover the races including one Sony SuperSlomo camera and one Ikegami HyperSloMo camera. Beni Giger was composing the world feed in tpc's HD2. Also the German broadcaster ARD and the Austrian broadcaster ORF were on location with their own presenter platforms and some additional ISO cameras. 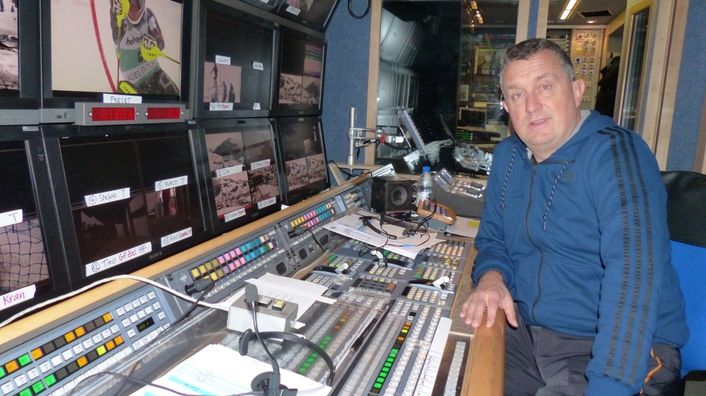 Adelboden giant slalom cancelled
From the initial Snow Control on 2nd January, the Adelboden team has worked non-stop to ensure the Chuenisbärgli course in Switzerland was ready for the weekend of races. They brought in snow by truck to make up for the warm temperatures and worked round the clock to ensure the conditions were optimal.

Unfortunately, a steady drizzle arrived on Friday afternoon and continued through the night, which alone still wasn’t enough to dampen the chances of the giant slalom as the course was holding up well. But the racers woke up to a heavy fog and after the jury inspection concluded at 9:30, it was clear that there would be no chance to stage the giant slalom race.

Immediately after cancellation of the Giant Slalom the Adelboden team started to set up the slope for the Slalom race on the next day. 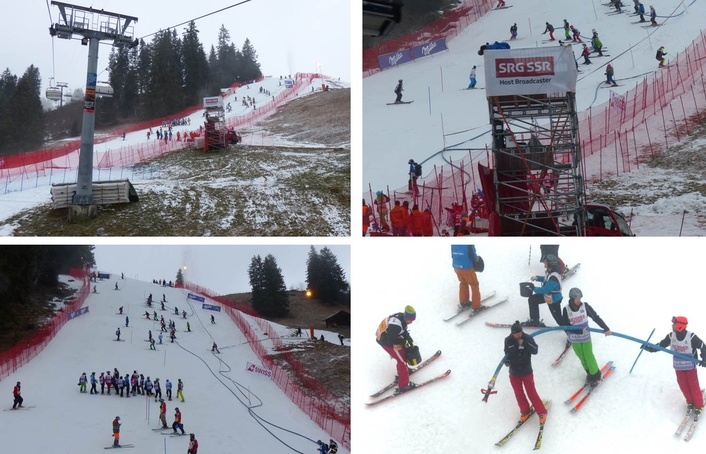 Setup of the Slalom slope

This also was true for the Longines team around Serge Carnal. Part of a first class TV production is a reliable timing control of the racers on the slope. For the slalom the time was measured at the start gate with 3 intermediate timings on the way down to the finish line. At every intermediate timing point a member of the Longines crew is positioned to open the photocell before the racer is coming and to close it as soon as he has passed (to prevent the system of receiving timing information when the people of the slope preparation team is moving in front of the photocell). 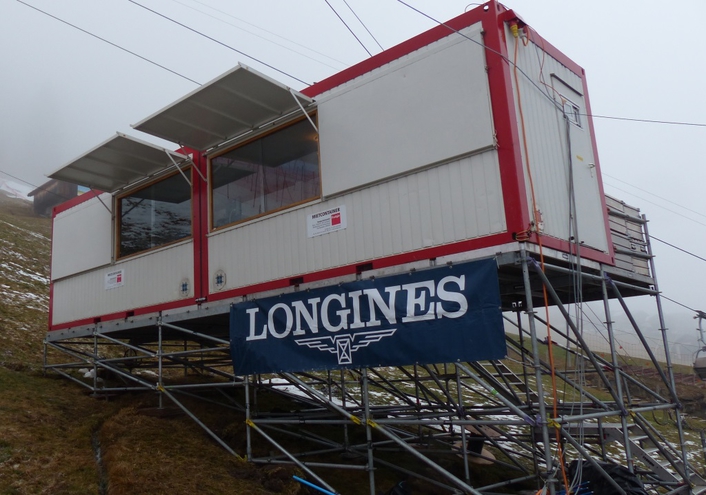 The Longine Timing Container at the Finish Area 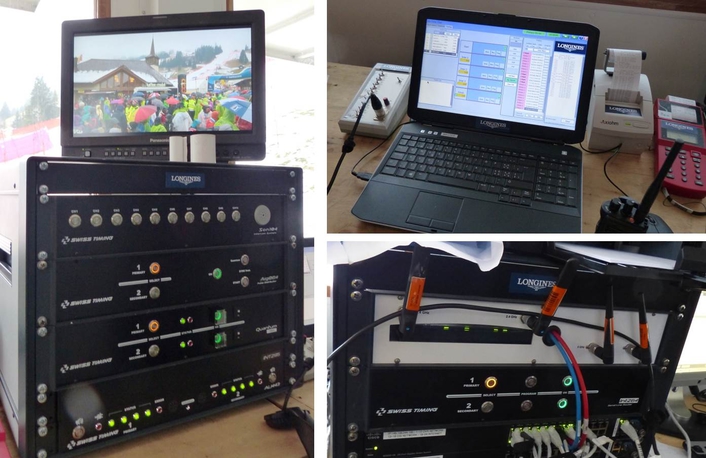 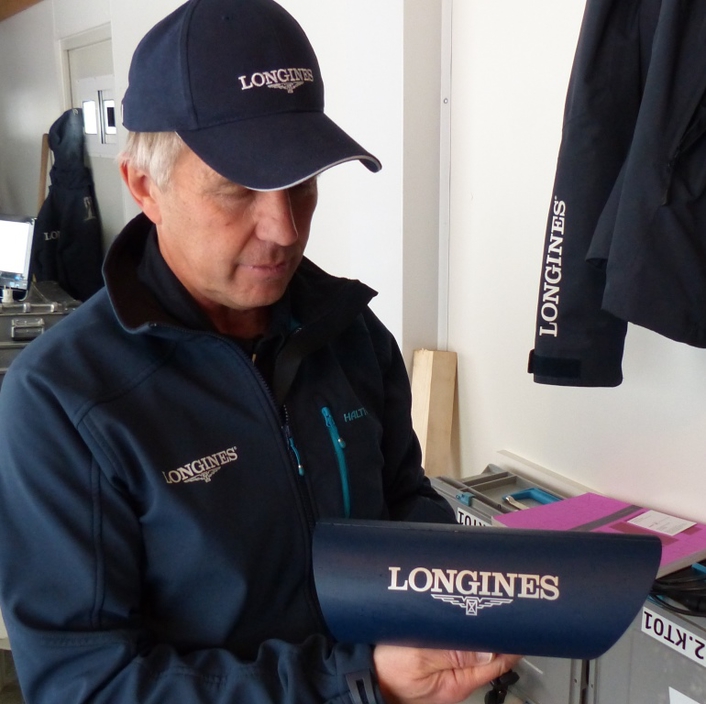 Longine's Serge Carnal with one of the Timing Photocells 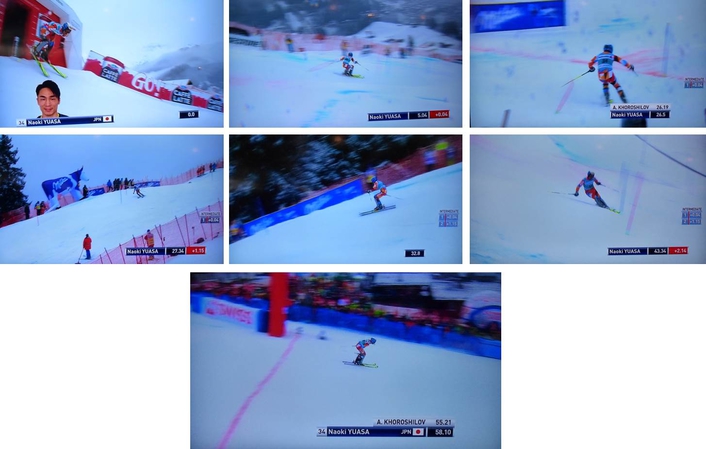 Example of the Interval Timing

Longine as one of the main sponsors of the FIS World Cup Races provides also the Startlist for each race, the ranking of each individual racer in the World Cup as well as results of each World Cup race. Also the score boards with the timing information for the spectators at the race slope are provided by Longine while the LED screens for the display of the TV signal are provided by the main sponsor Audi. 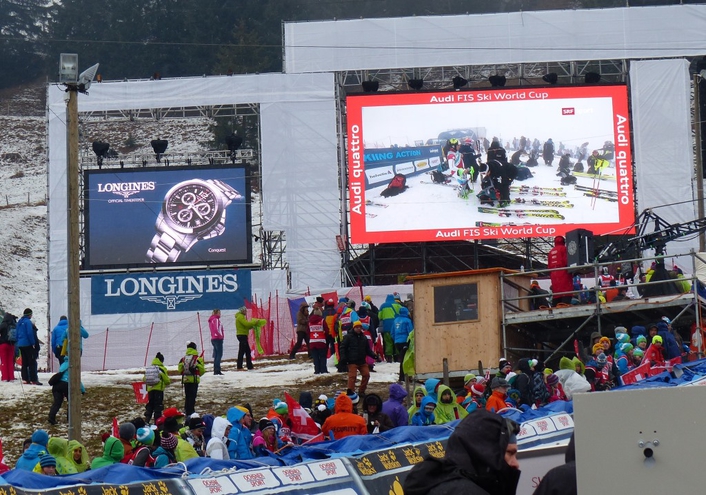 The TV crew as well as the timing crew were operating and maintaining independently their own intercom systems. However all the other broadcast duties were split between Riedel Communications and Riedel partner Tingo GmbH. While Riedel was responsible for the overall radio infrastucture (300 talkback units, e.g. race jury, slope preparation, rescue team, security team, event team, etc.), Tingo handled course planning, the world cup village, the VIP area, and system integration in the finish area. 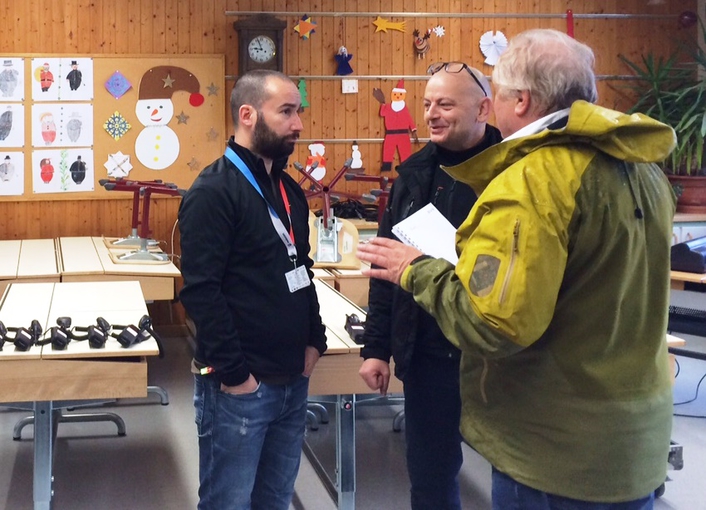 “As the technical planner, we work closely with Riedel to deliver pioneering system solutions for communications and signal distribution at the Audi FIS Wold Cup in Adelboden,” said Dani Niedermann, partner and planner at Tingo GmbH. “This cooperation has proven its value again and allows us to provide innovative contributions for skiing coverage."

For many years, Tingo has provided their proven expertise and innovative approach to Rivella AG, the event partner of the World Cup Adelboden AG. 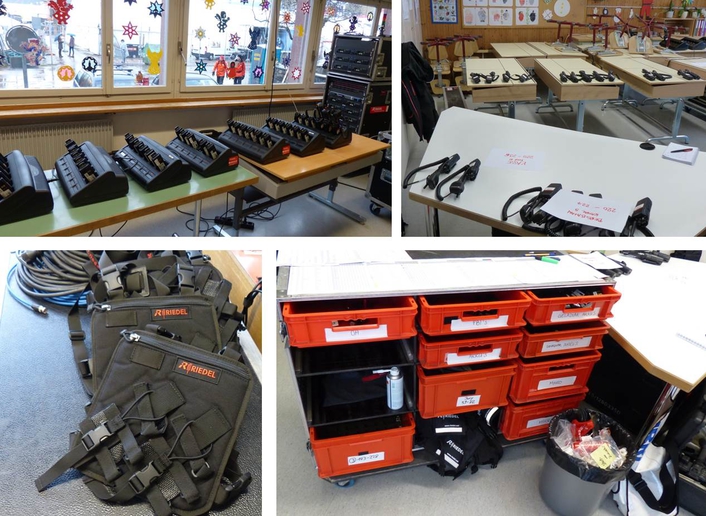 Also for the entertainment of the spectators prior, during and after the race events Tingo GmbH from Muri was responsible. They were around with three cameras and captured interviews with VIPs, with athletes but also with spectators. Tingo also provided the disc jockey and the moderators in the finish area. 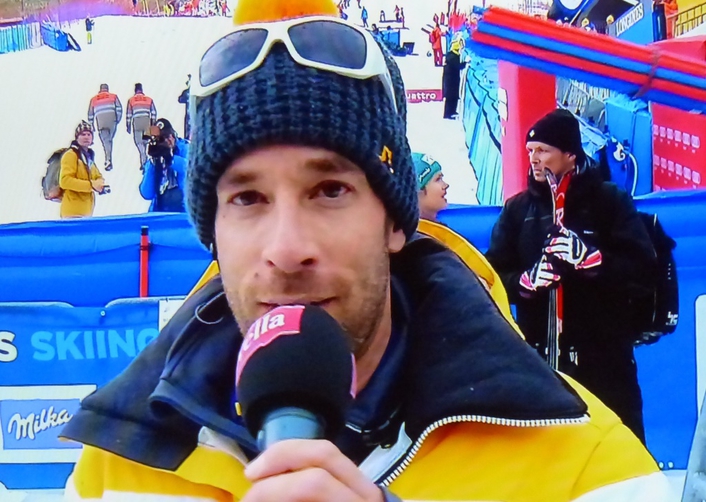 Moderator at the Finish Area entertaining the Spectators

Spectators at the Finish Area

Commentator and Disc Jockey Cabin with View to the Finish Line

Another client on Riedel's MediorNet was Infront. Infront is handling the sponsors. This includes the presentation of the sponsors with banners along the race track but also the inclusion of advertisement breaks on the LED screens during the race breaks. 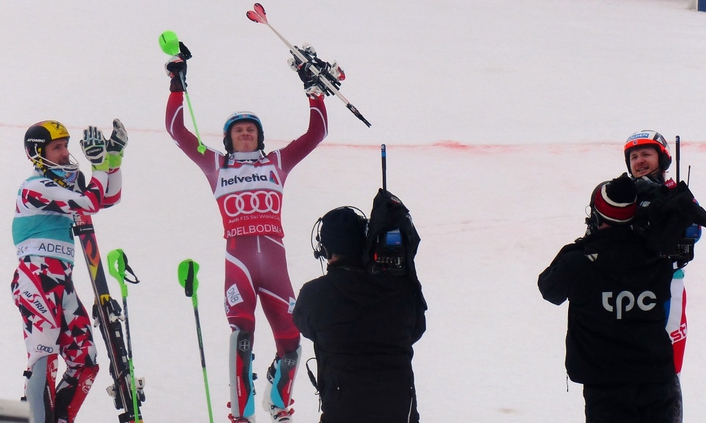 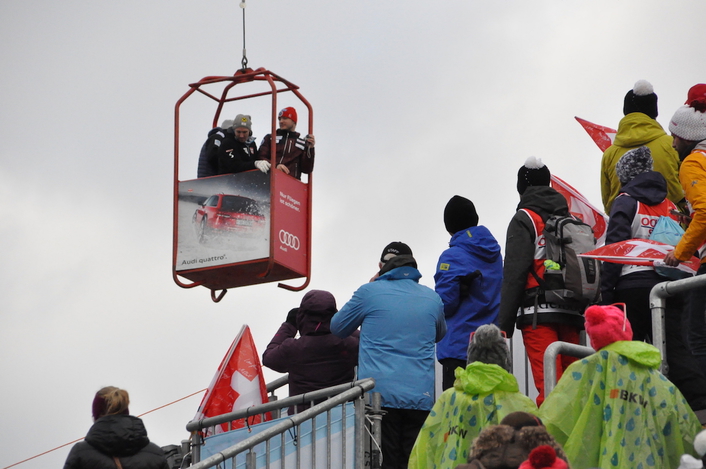 The Winners were lifted above the Spectators to the VIP Tent

The slalom was won by Henrik Kristoffersen, with Marcel Hirscher coming in as second and Alexander Khoroshilov as the third. After the victory ceremony in the finish area the three athletes were lifted with a crane above the spectators stands and delivered to the VIP tent where they were interviewed and finally released with the very best wishes for the next race in Wengen. 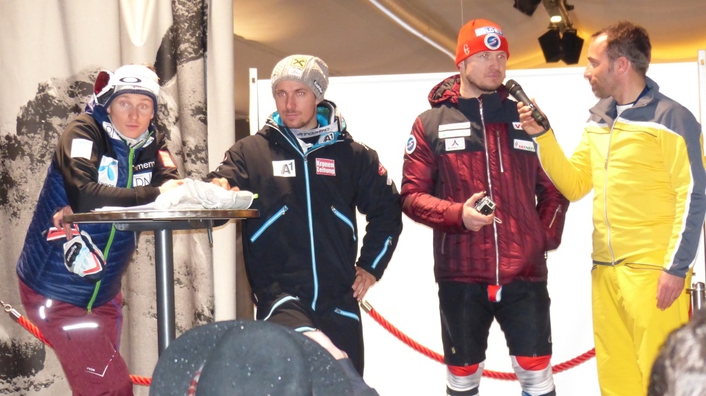 Interview with Henrik Kristoffersen, Marcel Hirscher and Alexander Khoroshilov in the VIP Tent