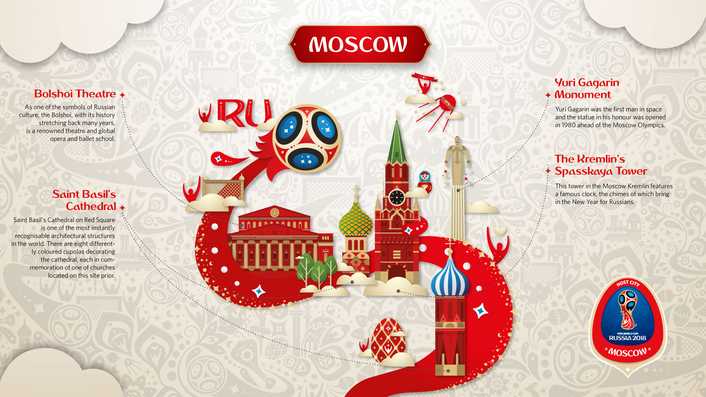 Each one of the 11 Host Cities of the 2018 FIFA World Cup Russia™ have acquired a signature look: unique and familiar imagery created in the style of the Official Look for the 2018 FIFA World Cup™ that will help the cities to show off their cultural values, architecture and natural beauty to the whole world.

Iconic elements were taken from local architecture and monuments, heraldry and the surrounding flora and fauna when creating the symbolic compositions to depict the 2018 FIFA World Cup Russia™ Host Cities. Thus, it is not hard to guess that Saint Basil's Cathedral and the Kremlin's Spasskaya Tower have been chosen for Moscow's signature style, while you can identify Kaliningrad by the Konigsberg Cathedral. Samara is represented by the Soyuz spacecraft that was built in the city whereas the monumental The Motherland Calls statue will welcome supporters to Volgograd. Kazan is symbolised by the mythological winged dragon the Zilant.

You can also identify Saint Petersburg by Peter the Great Monument, Ekaterinburg by Ural mountains, Nizhny Novgorod by its Kremlin, Rostov-on-Don by the Memorial Stele, Sochi by the Black Sea and Saransk by Ushakov Cathedral.

The Host City Official Look elements and compositions are a Russian innovation in the history of FIFA World Cup™ hosting. Previously, the competition's Host Cities would only be portrayed by Host City Logos and Host City Posters.

The Official Look of 2018 FIFA World Cup Russia™ was unveiled to the watching world during the Preliminary Draw held in Saint Petersburg in July 2015. Since then, you can identify elements of the entire tournament's imagery, within the artistic depictions of the cities where World Cup matches will be contested in just over two years' time.

"The Local Organising Committee of the 2018 FIFA World Cup Russia™ (LOC) and FIFA set themselves an ambition when developing these Host City compositions of the 2018 FIFA World Cup™ Official Look: to strengthen Russia's tourism appeal, as well as to reveal the country's cities and unique places through visual images and show off their unmatched beauty and form a bond with history and traditions," announced Alexey Sorokin, CEO of the LOC. "We are convinced that the Host Cities will welcome supporters from Russia and other countries as brightly and colourfully as their imagery."

The elements comprising the Host City Official Look compositions will be used in a variety of different ways at the 2018 FIFA World Cup in Russia™, such as promoting the Host Cities, decorating the stadiums and merchandising official products.