WI in Wonderland with Take That 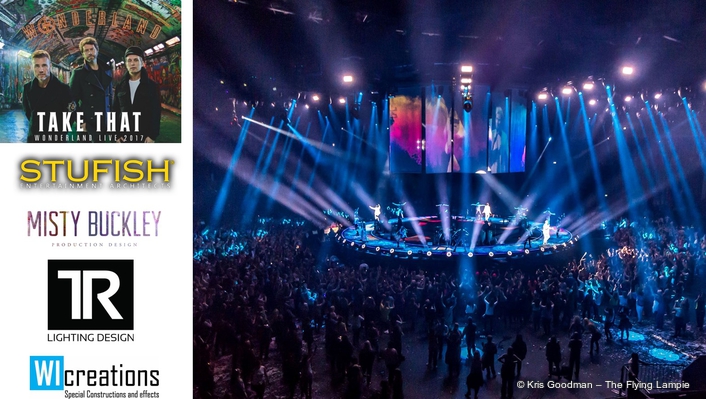 WI has supplied staging, elevators and extensive automation elements to the highly acclaimed Take That ‘Wonderland’ tour which kicked off at the Genting Arena, Birmingham, UK

The lively, colourful carnivalesque aesthetic is the vision of the band’s creative director Kim Gavin and the result of some serious creative and technical talents who have collaborated to bring action packed drama to a strong, highly entertaining performance by the band. The WI team was led by Hans Willems and Koen Peeters and the company was asked on-board by production manager Chris Vaughan. They worked closely with production designer Ray Winkler for Stufish, scenic designer Misty Buckley, lighting designer Tim Routledge and video designer Alex Leinster to specify and construct the numerous custom elements.

To deal with the complex and rigorous health and safety aspects of the project WI brought in Cristiano Giavedoni of Blumano as the dedicated safety manager.

WI designed and built the 20 metre diameter circular stage for the in-the-round show from scratch. It is the first time the band has embraced this particular performance concept, which allows them to get close to their fans … and is wowing the crowds.

It is also the first time that WI has developed this specific circular staging system. As with all their constructions, it is designed for touring - to be built and de-rigged quickly and straightforwardly, and travelled expediently in a series of dollies which pack logically into the truck.

The understage space is optimised to provide quick-change facilities as well as technical areas.

In the middle of the stage is a large – 9.5 x 6 metres – stage elevator which is used in various positions during a number of songs and lifts to 4.1 metres above stage level (itself 1.9 metres off the ground)… to the delight of the audience.

At its busiest, the elevator accommodates the three members of Take That – Gary Barlow, Howard Donald and Mark Owen – plus 12 dancers. 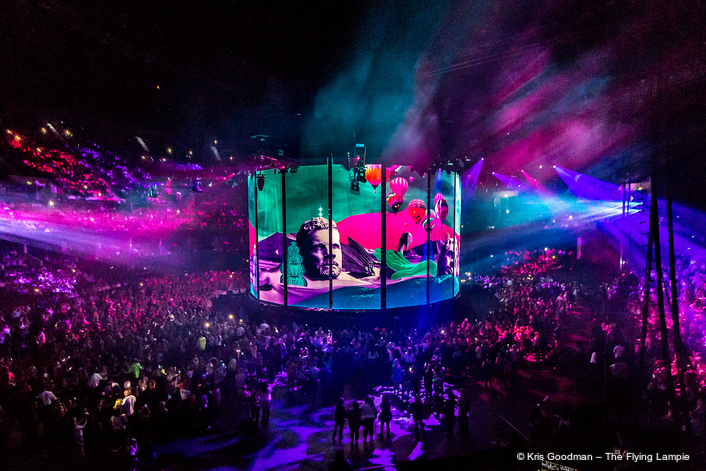 It has a lifting capacity of 10 tonnes and is based on four of WI’s TP6 lifts which were developed for large spectaculars. It forms part of a TT logo shape within the stage when in the down position, and also contains an LED floor. It is dubbed the ‘TT’ elevator by production.

The framework and mechanics were initially built at WI’s facility in Heist-op-den-Berg, Belgium and the ‘donut’ shaped LED floor fitted around the perimeter during a later stage of the development process.

The elevator movement is controlled from FOH by an operator using a Vector control system. 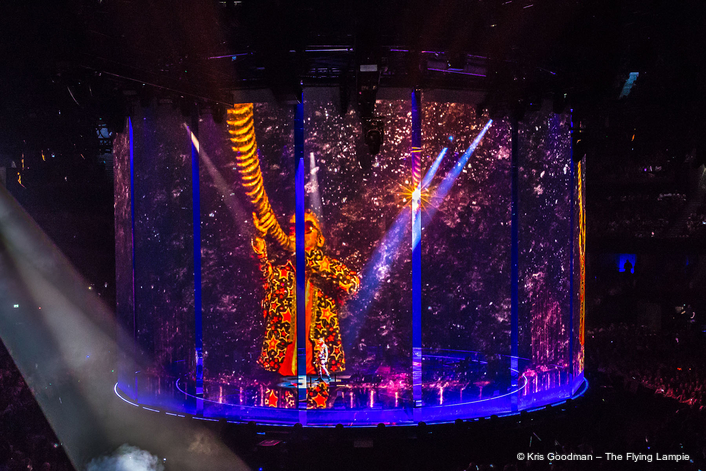 As it emerges from the stage, there are 10 passive roll-drop projection screens on the sides. UDP protocol generated by the Vector controller sends the positional data of the elevator to the d3 media server dealing with the playback video, so the projected video image is synched and scaled on the sides of the elevator to match its movement.

Inside the TT elevator (when up) is a secondary suspended platform on four motion control hoists. A hatch opens up in the decking and the band walk down to take up positions on this for one song which is sung ‘in the underbelly’ of the TT-elevator.

In the main circular stage there are four other WI ‘band lifts’ – in each of the stage quadrants - for musicians, and each of these rises up to stage level, complete with a pantograph access staircase below stage level which is utilized by the backline technicians to service and  communicate with their relevant musicians. 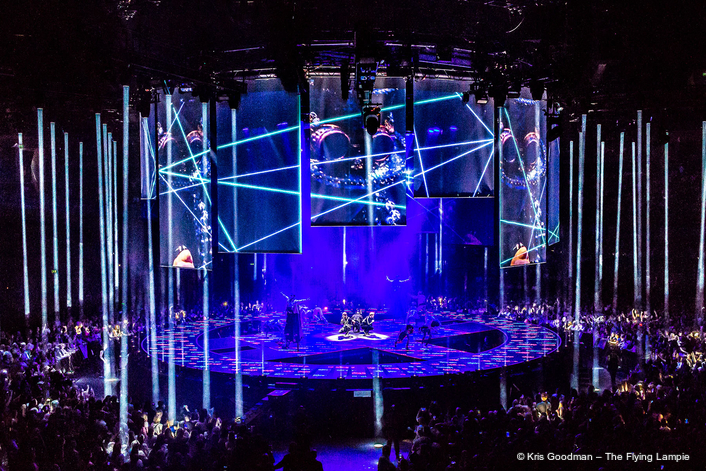 These band lifts are all controlled by locally stationed operators standing under the stage near to the lifts ... because it is essential that they have a real visual view of what is going on before any of the machines are activated.

Up above the centre of the stage is a TT shaped mother grid designed as a technical area, and this provides positions for three technicians to work during the show who are co-ordinating elements of automation, sound and lighting.

This mother grid is also housing four WI flying winches that suspend a 4.5 x 2.25 metre rippling flying carpet – a custom item made by WI - near the top of the show. Sitting on this is a sitar player who alights onto the stage during the show’s opening scene.

A rectangular shaped water curtain is also rigged to the mother grid, together with an array of audio and lighting racks, dimmers, amplifiers and power distribution units.

Further offstage is a 17 metre diameter circular WI tracking system that allows the continuous tracking of several props and acrobatic accessories used by aerial performers as they are tracked around the edge of the stage. 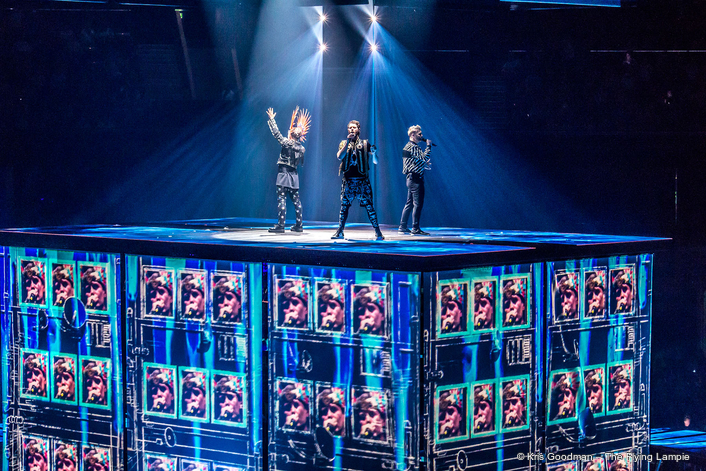 The train of 8 slave trolleys is moved by two zero speed tracking trolleys. Each of the 10 trolleys carries a zero-speed 250kg capacity BGV-C1 motion hoist that is used for the vertical motion of the stage props during “It’s All For You.”

In another song, the same hoists are used to suspend 10 bungies complete with performers.

Another 16 roll drop screens are suspended around the perimeters of the stage which fly in and out independently and can form a complete crown masking the stage. 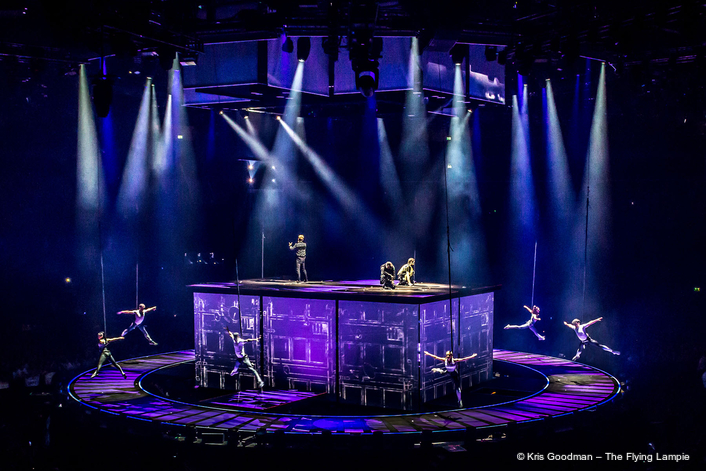 The TT elevator, roll-drop screens and the flying carpet are all controlled by the Vector console at FOH operated by Ross Maynard, who has over 160 cues in the show. A WI team of five is looking after all the automation and staging on the road, crew chiefed by Brecht Moreels.

Koen and Hans originally started work on the project in December last year, “It’s an extremely complex and ambitious show that has evolved over that time and in the process entailed a real collaboration between all the departments and disciplines. The teamwork has been incredible, everyone has been a pleasure to work with and it’s also been one of the most rewarding tours we have worked on to date,” says Koen.

Hans adds, “We are very proud to be working with Chris, Kim and such a highly regarded team and to be a part of delivering such an amazing show which is being so well received”.

The results of everyone’s endeavours can be enjoyed in the UK until the middle of June. 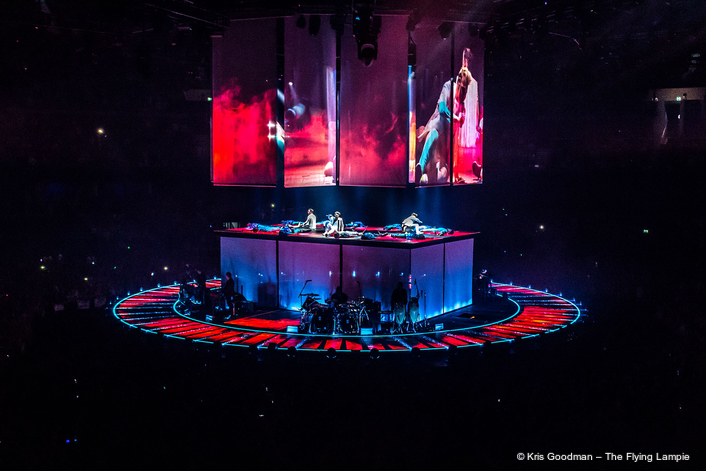