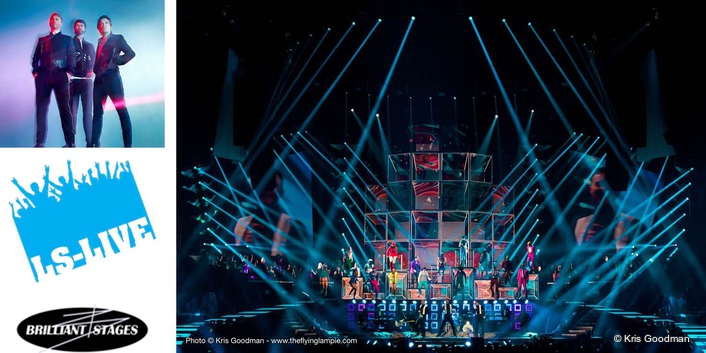 The current Take That Live 2015 tour, promoting the band’s seventh studio album, III, is the sixth major tour for which Brilliant Stages has constructed bespoke staging for the eternal boy band since the company first built a stage set for the band in 1994.

The main elements of Brilliant Stages’ construction comprise a main stage with apron and artistic performer staircases, a multi-level band stage backed by a series of nine box lifts, an upper stage with an integral service lift, and a forestage with piano lift, all of which connect perfectly to a runway which loops out into the arena to a B-stage.

As usual, Take That are delivering a full-on production, this time with a high degree of theatricality and a large number of performers in support of the main artists. The consequence is a set which demands as much activity below stage as on-stage - a major feature which Brilliant Stages needed to factor into production designer Misty Buckley’s multi-level set to provide maximum space below deck in which to house equipment, props, speakers and stage lifts, and to facilitate the access and activities of crew and performers.

Access treads, edged with LED lighting for safety, run beneath the upstage section of the runway and lead down to the tech world and backstage areas beneath. Above stage, a pair of ornate, distorted step assemblies, complete with handrails sympathetic to the step design, lead from the main stage up to the stage left and right runways.

The whole set is painted black with an artistic finish executed by long-term Brilliant collaborator, Jacqui Pyle, to Misty Buckley’s design which was inspired by The Cabinet of Dr Caligari. “Following in the footsteps of Take That’s awesome Circus and Progress productions (also projects for Brilliant Stages), we wanted to create something more simplistic but completely magical, inclusive and other-worldly,” says Buckley. “The monochrome backdrop gave us this great base from which colour could grow. I love Jackie’s work. She is a hugely gifted artist and she notes every detail that you want.  She’s just incredible to work with.”

Substage space for equipment, crew access and the integration of sub-bass speakers was included in the construction, and Brilliant built the stage in sections, into which the speakers could be installed in advance and the whole stage rolled into place, with speakers in situ, for speed of assembly and load-out.

The whole stage is designed to sit within the specific footprint of the undulating looped runway and Brilliant Stages liaised with the other contractors over its integration to ensure an extremely accurate fit that married perfectly from the start.

A 6m-diameter half-moon centre thrust stage, with piano lift and access steps to the arena floor, extends forward from the main stage. This is also designed with a minimal framework to give maximum space for storage below deck, and includes space for a grand piano and a piano lift onto which the piano can be rolled and raised for quick deployment during the show. The front access steps are fabricated in a similar style to those on the B-stage, and embedded with LED lighting in the treads. The whole stage is edged with front drapes.

Brilliant CAD designer Ollie Laight plotted a 20m wide x 10.5m deep x 3.6m high upstage platform that extends to the outer limits of the arena stands and upstage to meet a central video wall. Built using the same aluminium and plywood construction as the main stage, Brilliant designed the lower part of the stage around the footprint of a service lift, taking the base and attaching a regular framework off this while creating as much open space as possible for crew activity and storage space.

Access staircases to the upper stage double as construction steps during build up and breakdown phases. This is due to Brilliant incorporating access platforms at 2/3rd of the full height of the upper stage, from which the crew can construct other levels of the stage without the need for ladders. This speeds the construction process and makes a safer working environment. Handrails are then added to make the performance area safe for the artists.

“While the set and stage for this project were straight forward - I was especially pleased with the access passageways beneath the stage - the main challenge was the series of box lifts which were quite complex mechanisms,” says Mel Welch, Brilliant Stages Chief CAD Designer.

Housed within the framework between the main and upper stages, Brilliant Stages constructed a curved array of nine electronic, chain-driven box lifts. Each box lift, which weighs 1.5 tons, is on wheels and loaded onto rolling platforms - three per platform - which are rolled into position to form an arc. 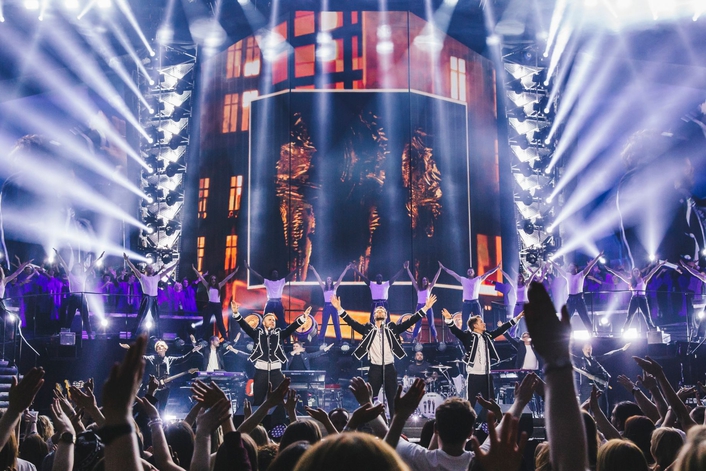 Each box lift is composed of two parts: the front section is clad with moving-head lighting fixtures on its downstage edge and forms part of an illuminated back wall behind the band that provides a focal point within lighting designer Tim Routledge’s design. The rear section is the telescopic box lift, each of which operates independently and can be raised from its home position (3.6m at stage level) to carry performers to any height up to a maximum of 2.5m above the stage.

The front face of each lift is clad with LED video panels, which are revealed as the lift is elevated, for which Brilliant built the interface framework and liaised with fellow contractors to ensure all married up precisely.

Each box lift has a secondary ‘dumb waiter’ lift inset into the main electronic lift, onto which a spotlight is loaded below stage and raised above stage level during the course of the concert.

“Artistic Director, Kim Gavin, and I wanted to stage the show as one big performance area,” says Buckley. “The idea behind those nine box lifts…well we had been around, above and through the stage… so we also needed to come from underneath!  The lifts gave us different perspectives and the screen facias offered an amazing canvas for video content.  It was breath taking when they first emerged from underneath the stage.”

The main part of the design for the box lifts was masterminded by Brilliant John Prentice and Tony Bowern, ably assisted by CAD Designer Giorgio Castronouvo. This is the first time this type of telescopic lift has been produced by Brilliant Stages in this format.

Brilliant Stages worked in conjunction with LS-Live’s automation department - Harry Heathfield, Mark Jackson and Ashley Phillips - who built the control racks and a motor gear box for the lifts. These control the position and speed of each box lift via a customised touchscreen interface which allows all nine lifts to be controlled from one computer. Cues can be recorded and recalled for the show and LS-Live adapted the software to create an intuitive, user-friendly interface suitable for all levels of technical ability. The LS-Live technicians then trained the show crew who run the show with LS-Live providing support. 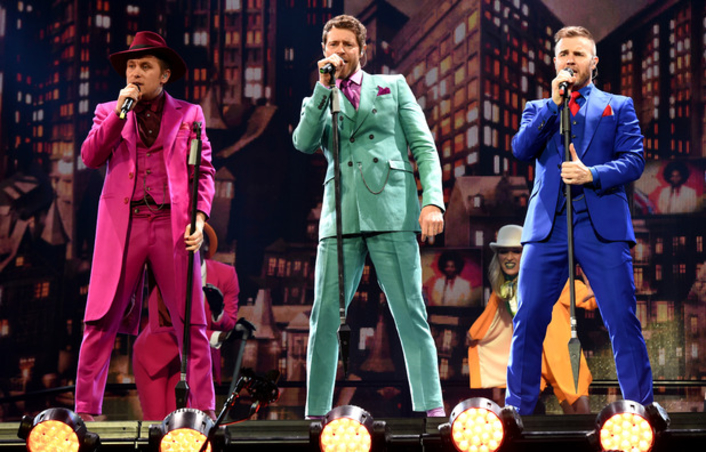 “We had high expectations when we came to work with Brilliant Stages and we weren’t disappointed!” says LS-Live’s Harry Heathfield. “Our department worked in tandem with the team at Brilliant who certainly know their stuff! The design and build of the 9-axis control system was led by our electronics guru, Mark Jackson, who has worked in the industry for over 25 years. The new challenge for us was to integrate Mark’s design with the latest touchscreen technology and we succeeded in producing a great control rack and touchscreen interface which exceeded the customers’ expectations.”

Take That’s technical manager, Phil Broad, agrees: “The control is working very well. Our programmer, Jem Nicholson, tells me it is easy to programme and easy to use.”

“We are very satisfied with the finished set on tour,” concludes Tour Production Manager, Chris Vaughan. “The majority of the Brilliant Stages staging elements are composed of Brilliant’s standard decking so is easy and quick to assemble. The potentially tricky part of marrying it with the runway from Total Fabrications worked very well right from the start. The upstage and downstage lifts are working well and the whole set – 11 set trucks worth – loads out in just 3 hours. Everyone is very happy.”

The Take That Live 2015 tour is currently playing arenas across the UK before it embarks for mainland Europe in the Autumn.