The Who Moves on with Astera 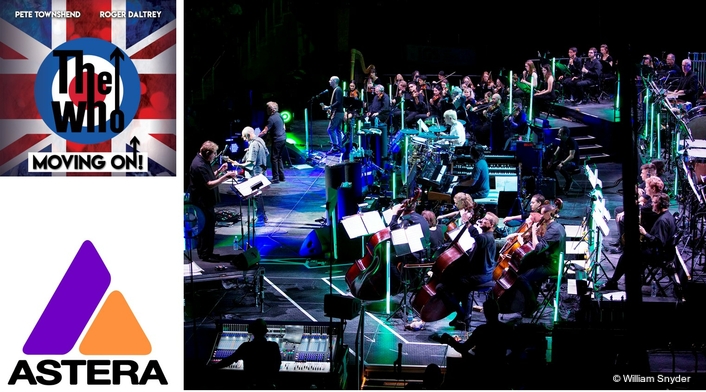 Lighting designer Tom Kenny specified 42 Astera Titan Tubes to be an integral part of the lighting rig for legendary rockers The Who. Their critically acclaimed Moving On! tour has just finished the first leg and will play 31 dates in the US, Canada and England accompanied by a local orchestra in each venue conducted by Keith Levinson, plus special guests including violinist Katie Jacoby and cellist Audrey Snyder.

This unique arrangement brings a new energy and vibe to the distinctive mad, bad, raw uncompromising powerhouse sound that characterises one of the most iconic bands of our time … who have defined generations of rock ‘n’ roll since the 1960s.

The tour is also promoting The Who’s first new album in 13 years, and Tom is loving being back on the road with the band for whom he’s worked since the 1980s.

The orchestral presentation demanded a completely new style and approach to creating a visuality onstage. Roger Daltry specifically didn’t want a large video wall at the back or in fact any onstage video elements. There was a clear directive to strip back, encouraging audiences to concentrate on the show and focus on the human side of the music.

But he did want luminescence in the area … and something more elegant and architectural that could help build the energy of the music.

The backdrop is made up from a silver threaded laser fabric which presents an interesting and beautifully textured surface that also takes the lighting very well.

There is also a curved mid-stage drape made from Bule and supplied by Atomic Design which flies in and out on some TAIT winches for the sections of the show just featuring The Who in full-on bellicose rock mode … without the orchestra.

“Basically, lighting wise I wanted something new, innovative and different that could help create plenty of drama”, and that’s what is happening with the Asteras.

The Tubes are run wirelessly and are dotted along the orchestra risers in three rows in between the musicians, which can be between 40 and 50 people each day according to the orchestra.

There is no smoke or haze during the shows, so ‘standard’ beamy lighting looks are also not very visible, meaning there is a lot of emphasis on the Titan effects punctuating and accenting the music.

Mounted on their neat small-footprint floor stands and needing no cabling, they are quick and easy to deploy in a busy space and perfect for the creative task that Tom anticipated.

This is a mix of slow and subtle fluid movements through to manic strobing chases which Tom uses to highlight specific breakdowns and parts of songs as the band blast through the set delighting fans with a pick of their greatest hits together with teasers of the new music.

They have performed in some baseball and football stadiums “and the tubes have stayed solid and never fallen over in strong wind” commented Tom, impressed. 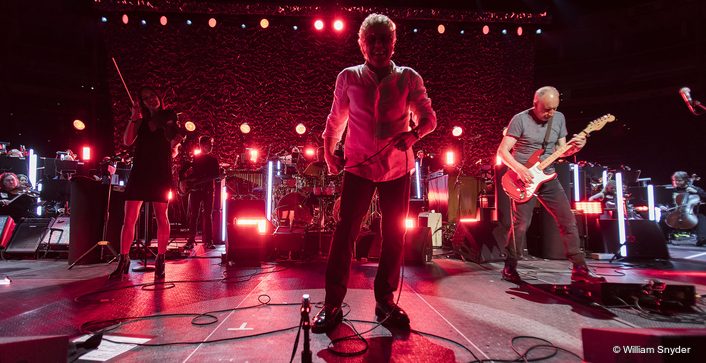 Pete Townsend himself even mentions the tubes on his Insta, Yaggerdang.

Critics, fans and the media have been lit up and raving with positive feedback about the show.

Tom started using Astera products – the AX1 and now the Titan Tubes in particular – for his various video and television work over the last couple of years. The first time was on the 2017 Latin Grammy’s in Las Vegas with large quantities of AX1s in the show following a demo by US distributors ICD.

He immediately noticed how well engineered the products were in addition to the “great range of effects.”

He loves the Titan Tubes for their power, intensity, colours, versatility and ease of use, so “pretty much everything about them including the fact they look modern and contemporary” he enthuses, having also recently used them on a big launch for the Genesis Mint Concept car at Hudson Yards in New York.

He mentioned that when he first started designing lights in the 1980s, “we all dreamed about having products like this at our disposal – light, reliable and battery powered that you can just put in place and control from 150 metres or more away … and now they are here!”

The Titan Tubes are being supplied to the Moving On! tour via PRG, VER and Showcat. In fact, it was Gary Mass, Nick Freed and Noel Duncan from Showcat who first introduced him to Astera tubes.

They are run via the grandMA2 console running all the show lighting, which was programmed by Fuji and is being operated by Jim Mustapha on the road. The lighting crew chiefs was Iestyn Thomas and Looch Ciampara from PRG.

The six spares they carried were used backstage for interviews and photo opportunities, with two set up permanently for this purpose, controlled locally via the Smartphone App. “They work fantastically in this context as well as onstage,” says Tom. 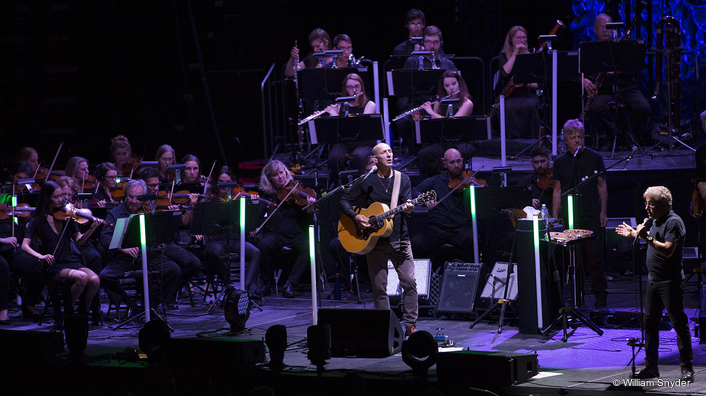 The Who’s Moving On! tour resumes in the UK at Wembley Arena on July 6th, then goes back to the U.S and Canada September and beyond.

Tom – proudly Irish and now living in Miami – is a prolific, respected and very successful production and lighting designer working for a dynamic mix of music, TV, video, broadcast and corporate clients and events worldwide. Apart from The Who, other ‘greats’ gracing his CV include the late David Bowie with whom he was close, Robert Plant, Jimmy Page, George Harrison, Eric Clapton, and David Byrne to name a few. Tom also is regularly commissioned by MTV, the BBC and other premium broadcasters to create lighting, visuals and sets for a cornucopia of high profile international awards and music shows.

Turning the Paulskirche Blue for Human Rights Day
A Flare for Astera!
Robe LEDWashes 1200s ‘Be Lucky’ with The Who