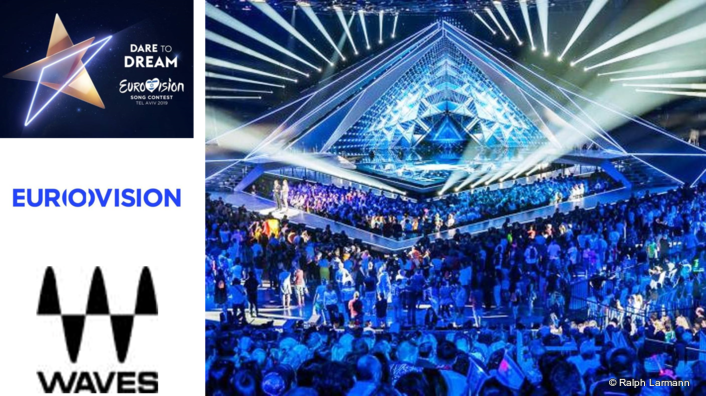 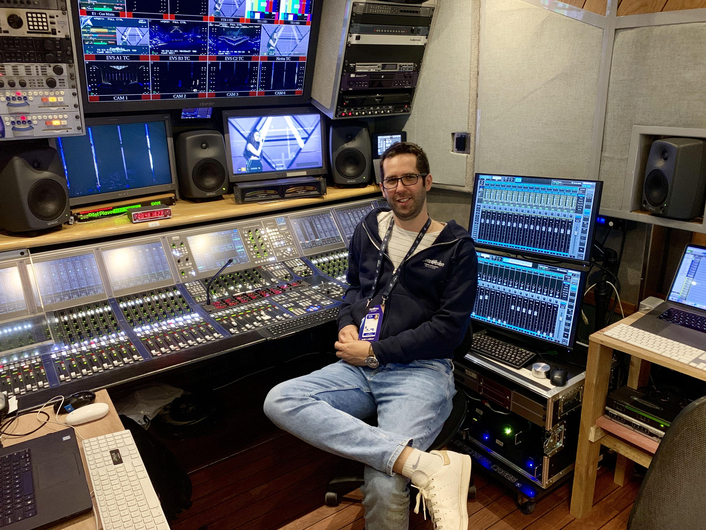 “The Heads of Sound of the local Eurovision production, Yair Goren and Yossi Edri, suggested that Pro Tools/LV1 engineer Jonathan Jacobi and myself mix the whole thing on the Waves eMotion LV1 mixer,” says broadcast mix engineer Omer Barzilay. “I was absolutely thrilled to be able to use Waves plugins in such an easy and flexible way, running the plugins directly within the software mixer. For me, Waves is the obvious choice for broadcast mixing, so that was the perfect solution. Also, when it comes to broadcast, you are usually looking for system redundancy and backups; eMotion LV1 delivered just that. It is a clear advantage to have a software-based system: we were able to easily create two identical systems with two Waves SoundGrid servers each, and we created even more backups on our personal laptops.”

Barzilay continues, “One of the greatest advantages of using the LV1 is that I was able to mix most of the songs ahead of time. I was mixing about a month and a half in advance of the show, at my studio, by routing all the stems that I received ahead of time from Pro Tools to eMotion LV1, creating all the automations and effects so they were ready for the show. Time is crucial when mixing so many different songs for such an immense musical event, and if I hadn’t used a software base mixer, I would never have been able to be prepared this way.”

Barzilay adds, about his workflow, “During the show we routed all audio to the eMotion LV1 mixer and to a multi-track recording computer. We used the LV1 mixer’s A/B input to route the recorder back in, so we could continue mixing the show between takes. This was very fast, and as soon as a delegation finished their first take, we kept mixing it until the next one. We didn't waste any time.” 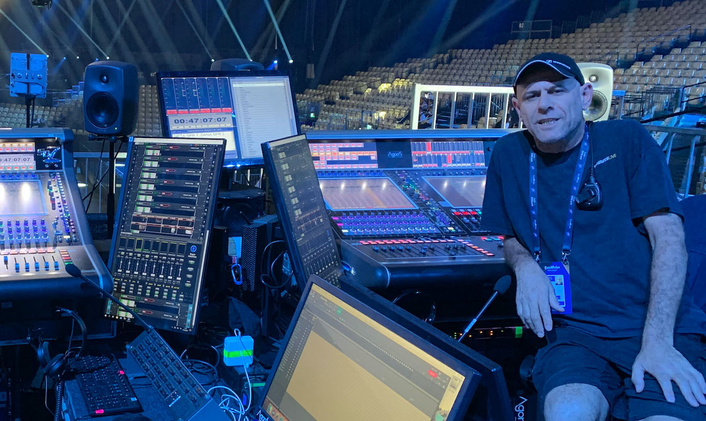 He adds, about using Waves plugins, “My go-to’s are the Scheps Omni Channel – this was the only channel strip I used for all vocals, including de-essing, EQ, compression and saturation. On lead vocals, the Waves C6 Multiband Compressor was extremely valuable in controlling high and low frequencies and for controlling pops and hisses. We also used the Waves Dugan Automixer plugin for all hosts’ and guests’ mics. The Waves H-Reverb Hybrid Reverb is my main and go-to reverb: we used six instances of it. Having said that, we also used the Waves IR1 Convolution Reverb and Renaissance Reverb. My main delay is the Waves H-Delay Hybrid Delay, which I used for around 90 percent of the delays in this production. In addition, I used the Manny Marroquin Delay for L/R separation. Finally, the Abbey Road TG Mastering Chain was on our master chain: ALL music was routing through it.” 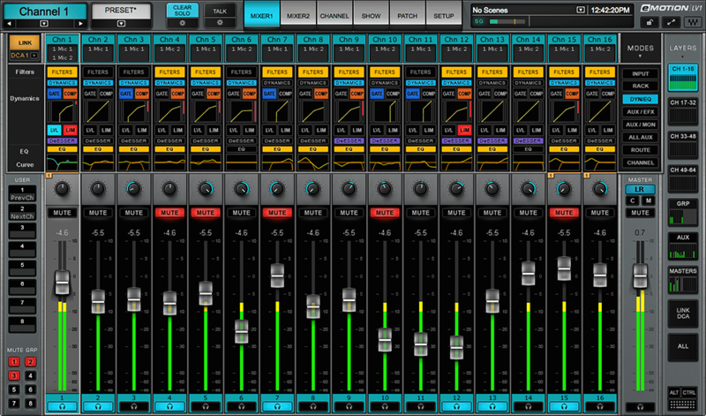 “The biggest advantage of the Waves eMotion LV1,” Barzilay sums up, “is that you get to bring your studio with you to live events. Some of the plugins are effects I’ve been using for the last two decades!”

FOH mix engineer Eran Ben Zur comments about his workflow and using Waves plugins: “When mixing a live show that is broadcast to over 200 million people, an FOH engineer must combine two main goals: You need to mix the show for the 8,000 seated in the arena, achieving the right sound pressure level to ensure that the audience receives the right amount of sonic energy. But you also need to make absolutely sure that the PA won’t interrupt a smooth, clean and clear broadcast.” 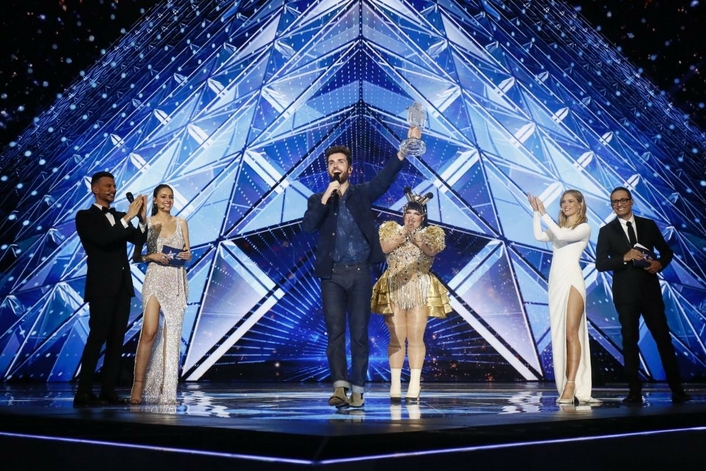 Duncan Laurence, winner of the ESC 2019 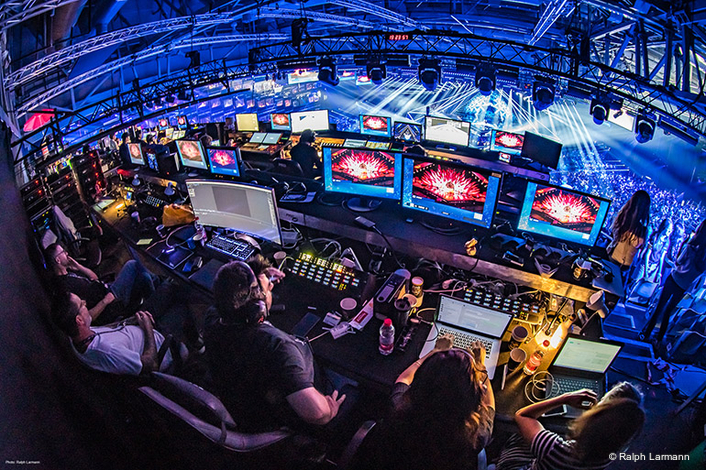 “One challenge of the show,” Eran explains, “was to mix not just the music, but also the mics of the four hosts interacting on stage. For that, I used Waves’ Primary Source Expander (PSE) and the X-FDBK feedback elimination plugins, followed by the Dugan Automixer on each host’s mic. All these were then routed as a group, processed by Waves MaxxVolume. In my workflow, I first used the X-FDBK for ringing the P.A. (with the PSE and Dugan on bypass): one of the techs, with a headset on, walked all along the catwalk while I was ringing the P.A. for more accurate EQ, and also in order to get rid of potential feedback. Then, I ‘locked’ X-FDBK and used the PSE just to make sure that only the primary source (MC) will be heard. The Dugan Automixer gives me the freedom to work on other things in the mix while a single host is speaking, or even when all of the four presenters are speaking simultaneously. It’s as though I had another ‘ghost engineer’ behind the scenes, fading quickly in and out as the hosts speak into the mics. This way I can easily get rid of all the ambiance rumble that usually occurs when using headset mics. The Dugan Automixer plugin also helps me maintain the same SPL in the mix, so if there are one or more speaking hosts, they will all be projecting the same volume.” 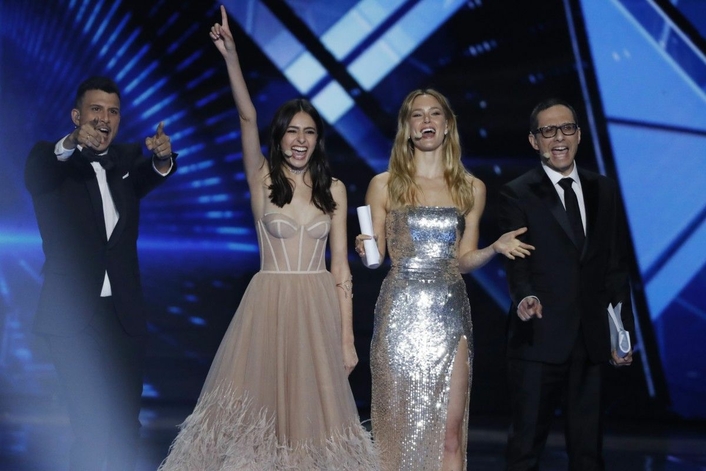 “At one point, the four hosts sounded so rich, full-range, loud and clear inside the venue, that Omer, the broadcast engineer, asked me, ‘Is the PA on?’ That’s how transparent it is.”

He adds, “For mixing the 41 delegations’ songs and the interim guest acts, and to ensure that it sounds as close as possible to the original tracks, each song had snapshots containing the changes of the vocal effects, the basic balance of the lead and backing vocals, and also the overall tracks. The Waves Primary Source Expander and the Scheps Omni Channel came in handy for processing each of the vocalist’s channels, followed by the Waves C6 Multiband Compressor on the vocal group for final shaping. I also used the Waves F6 Floating-Band Dynamic EQ on the playback group from the side chain/vocal group, to make sure that the vocals are in your face and up front, especially when the vocal was competing with a massive musical arrangement. I also used Waves’ H-Reverb Hybrid Reverb and H-Delay Hybrid Delay for vocal effects, the Waves Doubler for harmonizer, JJP Vocals for backing vocals, and the Waves/Abbey Road EMI TG12345 Channel Strip for special overdrive effects and parallel compression on lead vocalists. To complete the sonic picture, on the Master L/R, I slapped on the Waves SSL G-Master Buss Compressor followed by the L2 Ultramaximizer.”

“Eurovision 2019 was a massive production in terms of scale and responsibility,” Eran concludes. “Waves tools enabled us to take on this challenge with the confidence and conviction that we will have a smooth ride.”