Waves Audio, a leading provider of digital signal processing solutions, is now shipping the Waves eMotion LV1 mixer, a revolutionary live digital mixing console that provides real-time audio mixing for front-of-house, monitor and broadcast engineers. Based on Waves SoundGrid® technology, this software mixer delivers the superior sound quality for which Waves is renowned, as well as the convenience and speed needed in demanding live environments.

eMotion LV1 gives live engineers unprecedented control over their sound. Each of the mixer’s channels has its own plugin rack capable of running up to eight Waves and third-party plugins. This means you can mix live with hundreds of instances of your favorite plugins, all running inside the mixer itself. All plugin presets and chains saved in eMotion LV1 can be shared with the Waves MultiRack and StudioRack plugin hosts, allowing engineers to move seamlessly between live and studio environments.

eMotion LV1 comes in three configurations: 64, 32 or 16 stereo/mono input channels. The mixer can be controlled by hardware control surfaces and multi-touch devices, ranging from four touchscreens to a single laptop or tablet. 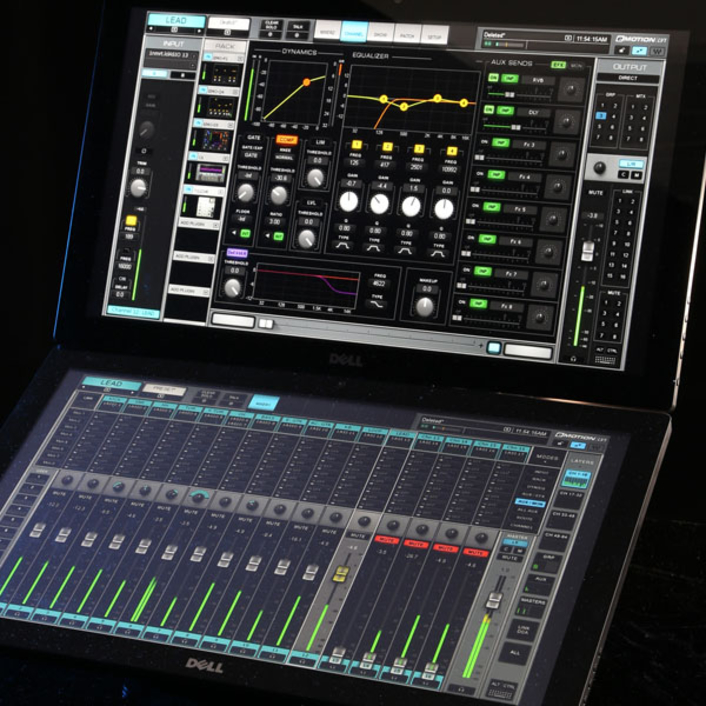 eMotion LV1 uses the SoundGrid infrastructure for audio networking. It can be configured as a portable or stationary setup, and can connect to any SoundGrid-compatible I/O or server. This means that live sound engineers can easily take their mixer with them and run it anytime, anywhere — at home, in a hotel room, on the tour bus, or at the live venue. This way they can have all the time they need to work on their sessions, whether offline or with full-on audio, and make sure they are 100% ready for the show.

About Waves Audio Ltd.:
Waves is the world’s leading developer of audio DSP solutions for the professional, broadcast, and consumer electronics audio markets. Since its start in the early '90s with the introduction of the Q10 equalizer plugin, Waves has gone on to develop a comprehensive line of over 200 audio plugins, including industry standards like the L1 and L2 Ultramaximizers, popular vintage console models, and innovative mixing tools like Vocal Rider and the Artist Signature Series. For its accomplishments, Waves received a Technical GRAMMY® Award in 2011, and the Q10 was selected as an inductee into the TECnology Hall of Fame. Waves technologies are now used to improve sound quality in virtually every sector of the audio market, from recording, mixing, mastering and post-production to broadcast, live sound, and consumer electronics. Waves has over 20 years of expertise in the development of psychoacoustic signal processing algorithms that leverage knowledge of human auditory perception to radically improve perceived sound quality. Waves’ award-winning processors are utilized to improve sound quality in the creation of hit records, major motion pictures, and top-selling video games worldwide. Waves offers computer software and hardware-plus-software solutions for the professional and broadcast markets. The company’s WavesLive division is a market leader in all live sound sectors, spearheading the development of solutions for all live platforms. Under its Maxx brand, Waves offers semiconductor and licensable algorithms for consumer electronics applications. Waves Maxx technologies dramatically enhance audio performance and are used by industry leaders such as Dell, Lenovo, ASUS, LG, Oppo, JVC, Denon and many others.