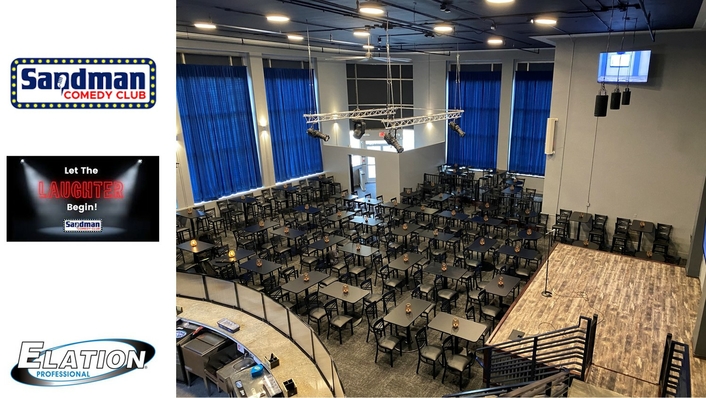 In late April, Michael and Carrie Sands will be fulfilling a longtime dream when they open Richmond, Virginia’s newest entertainment venue, Sandman Comedy Club. Located in a roomy 1940’s bank building complete with bank vault, the new venue houses an Elation lighting system of WW Profile HP™, Fuze Spot™, Colour Pendant™ and SixBar 1000™ luminaires that will be used for much more than just comedy.

The Sandman Comedy Club, which will also hold Open Mic and Karaoke nights every week, will feature some of America’s best comedic talent while serving up great food and drinks in a spacious room that features excellent views of the stage from every seat in the house. 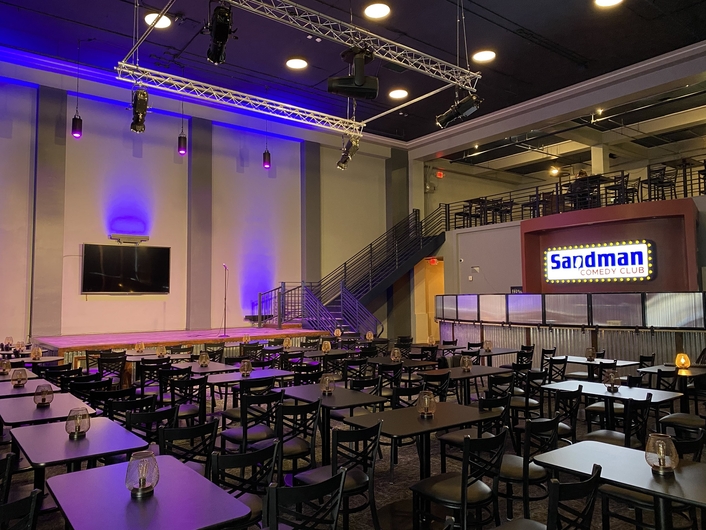 Catering to live audience and video

AV integration company and Elation dealer Code 3 AV of Midlothian, Virginia, was called on to provide a comprehensive AV package for the new facility. Code 3’s Vladimir Syrovatka worked closely with Michael Sands on the project, helping him realize some opportunities with the space that the owner might not initially have been aware of. “Almost as an aside, Michael mentioned that he might want to also rent out the space to corporate clients or for weddings or other private parties,” Syrovatka explains. “That was a great idea. There are a lot of other opportunities to use the space besides comedy that he can leverage to give him additional streams of revenue. That modified the concept to the extent that he saw the importance in getting good lighting so he could not only light live performers but get good video capture through good balanced lighting as well.”

As they talked about Michael’s vision and the different ways he could market the space, the recording/video aspect became a central element of the design. “With Covid, distance conferencing and online broadcast has become much more popular and they wanted to make sure they could cover that. Lighting had to work for camera as well as the live audience. By working closely with him and developing with him this methodology for operating, we were able to put together a very effective system for audio, lighting, video and camera.”

The approximate 200-capacity space was completely retrofitted from its previous incarnation as a brewpub with new kitchen and bar and the old bank vault serving as a one-of-a-kind liquor locker. Michael, a successful retired businessman who always had a penchant for comedy, naturally wanted to be cost effective so Syrovatka worked within a finite budget to determine what elements of the lighting were most important. “Given that feedback, we massaged the budget and got the best lighting elements in place that could support his vision,” he said. 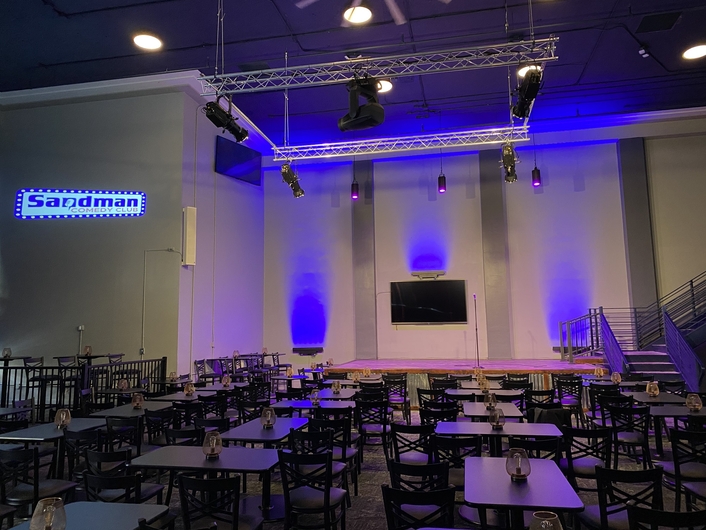 Syrovatka says that despite being a small lighting system “because it’s dynamic lighting it’s not limited at all. It’s very versatile and still allows them to do a lot.”

The system consists of two sticks of downstage truss that hold four WW Profile HP ellipsoidals along with a Fuze Spot LED moving head. The WW Profiles give warm white light onto the stage while the Fuze Spot can be used as a followspot, graphics projector or, with frost engaged, as a washlight. It has also been outfitted with a custom gobo to sweep the Sandman logo around the room. Three Colour Pendants with RGBW color systems are suspended over the stage to provide color or white light options onto the stage while adding depth to the look for video. Finally, SixBar 1000 LED battens, one left and one right at footlight positions and a third above a centered 90-inch display, wash the entire wall behind the performer in complementary tones. “The SixBars are wonderful and very effective,” says Syrovatka. “They really highlight the performance and bring a lot of excitement to the venue.” 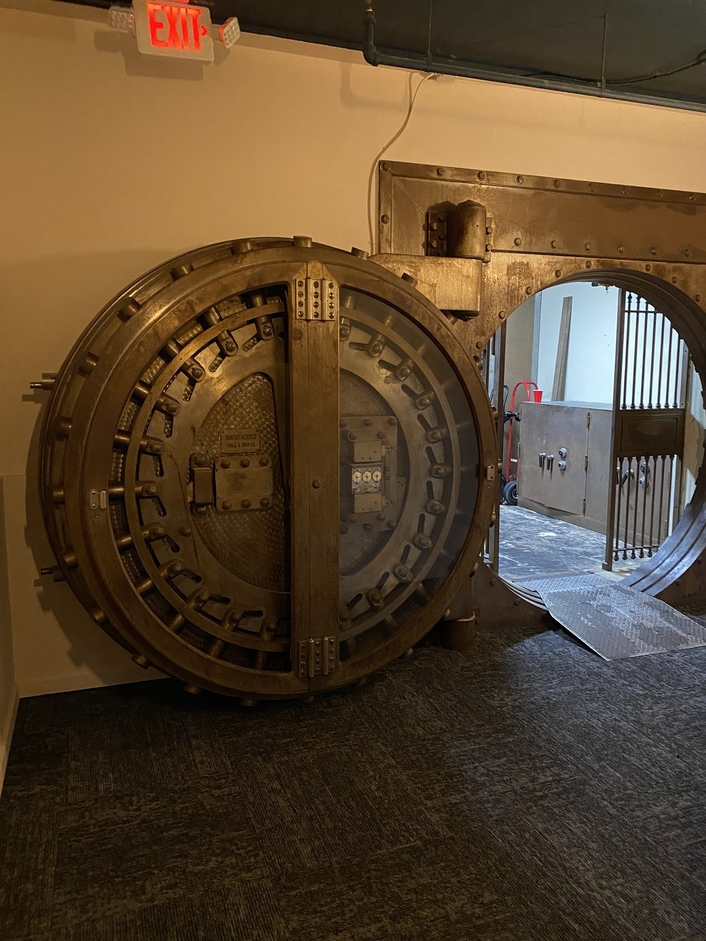 Lighting scenes were created using an Elation Show Designer 1™ controller working with a DMX interface and touch panel set up with preset buttons. An iPad configured with the touch panel allows venue personnel to walk throughout the facility and make adjustments to lighting and sound as needed.

A fixed camera in the back of the room allows them to capture the entire stage to record shows or can be used for online video meetings and distance conferencing. The camera links to a monitor in the green room where the next act is waiting, as well as to a digital recording device that can stream out to the Internet. Syrovatka says that performers will be delighted with the recording capability as it will allow acts to acquire a copy for their own promotion, both expanding the comedian's reach while marketing the club as well.

Code 3 worked closely with Chris Healy of Elation rep firm The Healy Group on the operating aspects of the system. “Chris was very, very helpful on this project,” Syrovatka states, who reached out to him to put the finer details on operation of the system and setup of the lighting units. “He came in and really opened the client’s eyes as to the potential of what the lighting system could do.”

The lighting install was completed earlier this year with the venue scheduled to celebrate its Grand Opening on April 29th. “We are very proud of this installation and excited about what we were able to do within a limited budget,” Syrovatka concludes. “Our communication with the owner helped him to understand the role of lighting in supporting what he was trying to do. He felt it brought a lot of dynamism to his ability to support these performers in this environment and once he saw the finished package he was absolutely delighted with the end result.” 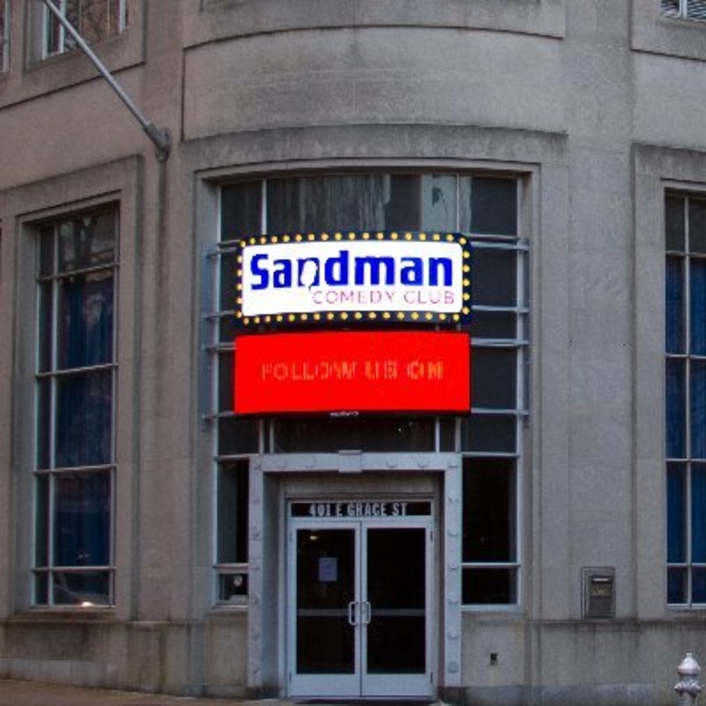 Based in California with facilities in Florida and Mexico City, as well as European offices in The Netherlands, Elation designs and manufactures a comprehensive range of innovative lighting products known for its superior performance, excellent efficiency, and outstanding price:value ratio, all backed by a hard-earned reputation for Total Support. Elation also offers an advanced line of lighting control products through Obsidian Control Systems, as well as a full range of dependable specialty effects called Magmatic. Our mission has always been simple: to provide best-in-class products and service while offering the best value:performance ratio in the industry. Elation products continue to be a part of the industry’s most exciting projects across the globe.