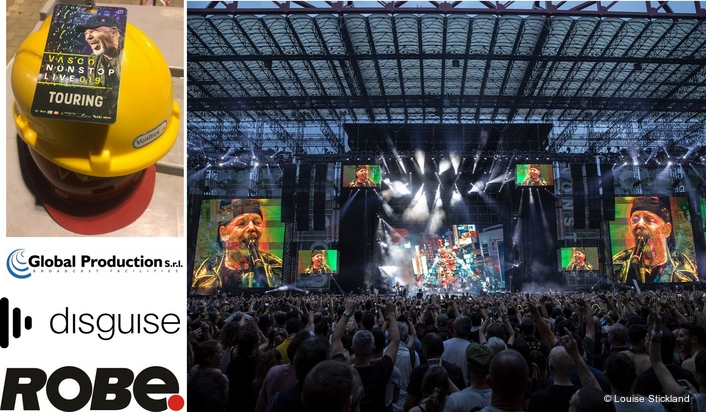 Italian showman, superstar and self-styled provocateur Vasco Rossi – Il Blasco – was back with another monumental Live Kom tour including six sold out nights at Milan’s San Siro stadium – packed with 70,000 fans a pop – delighting all with a performance spectacle to match his profile as Italy’s most loved and talked about rock star! Leading the creative production team was lighting designer Giovanni Pinna, who has worked with the artist for many years as part of a talented team ensuring that the live shows are constantly exciting, interesting and innovative and meet the massive public expectations each year.

A master of making impressions – Giovanni chose to use over 340 Robe moving lights – 152 x MegaPointes, 122 x Spiiders and 72 x LEDBeam 150s – to assist in that huge visual impact!

The initial visual inspiration for this years’ tour design was the 2018 tour – as the artist wanted some continuity in that raw, provocative industrial look with towers and enormous video surfaces. That in turn had been informed by the appearance Vasco’s only 2017 concert performance – in front of 225,000 people at Modena Park in his hometown. 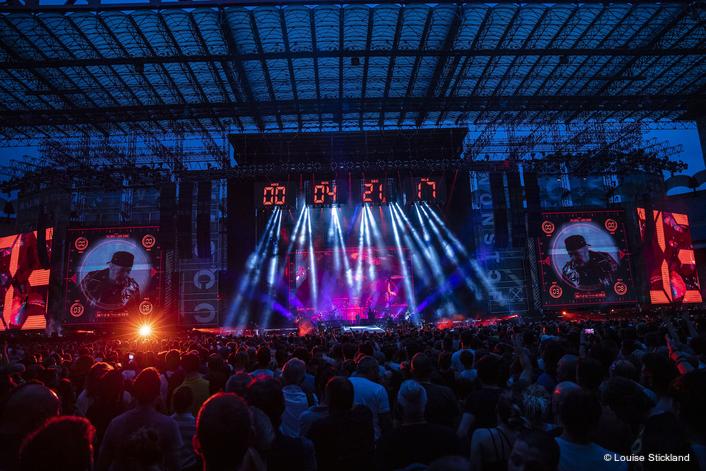 Everyone liked the huge statement made by the Modena show design and how it elegantly and simply reinforced Vasco’s enormous charisma and presence – complete with signature backwards baseball cap and soulful eyes – so this look was refined, modified and reimagined for Live Kom 19.

“We simply wanted more and more out of everything that was visual” stated Giovanni. 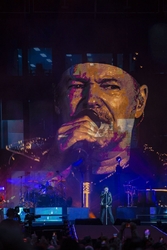 To some extent, the design was tailored to the San Siro venue as it hosted the most multiple shows. The large central LED screen was flanked by four massive surfaces – two a side – creating a 97-metre-wide stage – effectively 40 metres wider than the 2018 tour!

With the increase in dimensions and the additional video surfaces … more lights were needed to keep the balance!

Above the central section of stage was a video ‘header’ which split into four sections that tracked up / down and left / right into different configurations. The riser layout, central runway and walkways below were part of a new stage design by Gioforma.

The roof lighting was completely new, with an 18 x 8 metre grid providing the main over-stage lighting positions - upstage of the 4 x moving LED header pieces - with a 24 metre front truss, plus lighting ‘top pods’ stage left and right tucked in between the side screens.

With this much LED in the environment, Giovanni needed super-bright lightsources and that’s why he chose the Robe fixtures.

MegaPointes he had used for the first time on the 2018 tour and was “highly impressed” with their power and functionality compared to the compact size.

Robe Spiiders had been a core fixture of the Modena show, and Giovanni has been using them on various design projects ever since.

The little LEDBeam 150s once again proved themselves to be agile and flexible, carefully deployed across the riser positions on the decks and along the front lip of the stage in the footlights position. They didn’t intrude at all due to their small size and they had max effect in highlighting band members from the low angles. 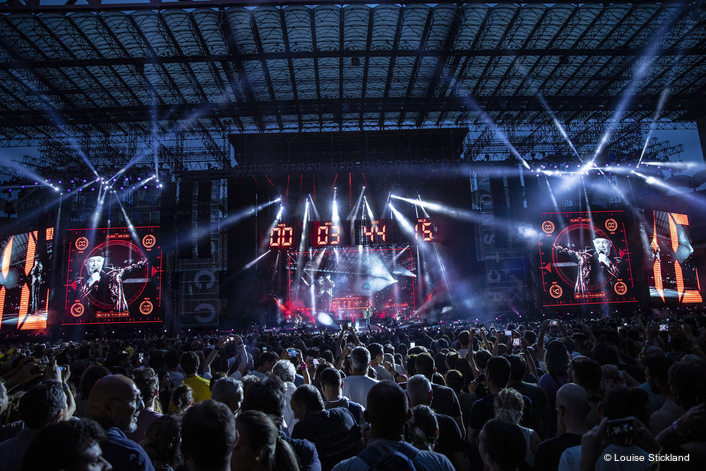 The MegaPointes and Spiiders were scattered all over the rig – on the main grid, in the side pods and along the impressive back wall, which featured scenic mesh banners and had the whole surface area outlined in square and rectangular shapes utilising LED strips, a look revealed during some of the more architectural moments.

Twenty-four of the MegaPointes and twelve of the Spiiders were working in conjunction with a BlackTrax remote follow system, highlighting the guitarists and bass player. 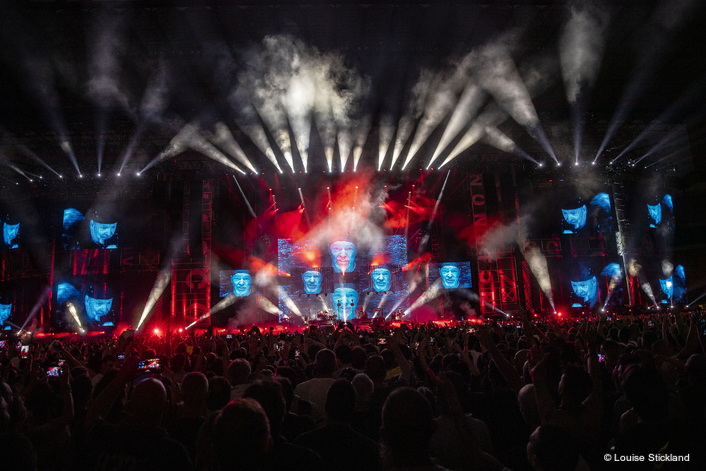 Apart from the video, there was another reason for Giovanni wanting the brightness of Robe fixtures … due to noise restrictions at San Siro, the first hour of the show was played in daylight.

Again, he needed punchy fixtures to deal with an essentially ‘white light show’ for that first hour as well as the trim heights of around 24 metres.

This element was coordinated with Vasco himself. When the setlist was decided on, the first of three sections was filled with some of his big rock-out power anthems which were ideally suited for lighting that works best in daylight. 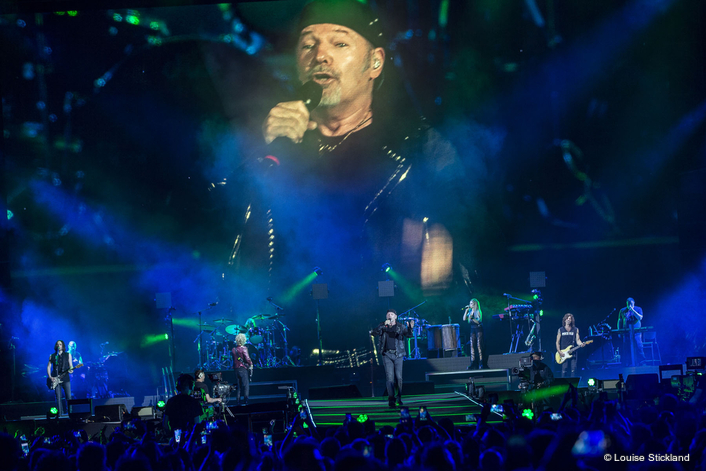 “Using all these Robe fixtures helped achieve the powerful, clear, coherent feel I wanted to set the scene at the top of the show. When I ventured into a few colours during a couple of the slower numbers, even contending with daylight their visibility was amazing!”

On the third number he required storing reds and blues to underline the narrative of ‘Good & Bad’, and the Spiiders and MegaPointes delivered this dramatically and effectively on cue.

Giovanni further commented that the Spiiders were excellent for illuminating the audience across throw distances of 140 / 150 metres, and he used the Macro effects and the individual ring control. 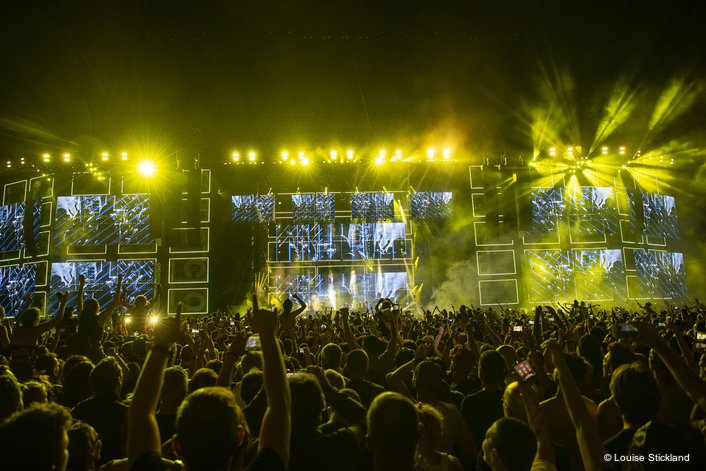 As they had gained around 2 metres downstage for this stage and set layout, the finely tuned focusing of the LEDBeam 150s along the front and on the runways became increasingly significant as they were the only real physical front light apart from six 4Kw front follow spots.

They gave excellent coverage of the band, maximising the zoom in the short throw distance, and they also augmented overhead key lighting.

The set list offered a dynamic mix of Vasco classics, new material and some of his more controversial renditions – with 30 albums to his name – he wasn’t short of content! 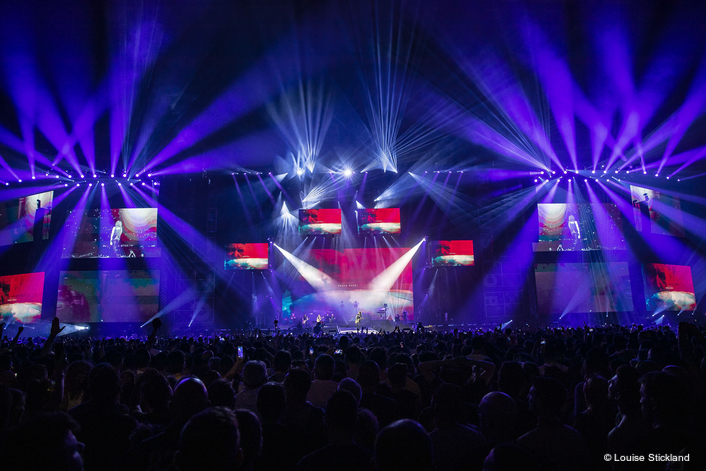 In addition to this high concentration of Robe fixtures on the rig, Giovanni had around 350 other lights, all supplied by rental company BOTW. Lighting crew chief was Fabrizio Moggio, with whom he’s worked on previous Vasco shows and a diversity of other projects.

Giovanni had a big input into the playback video content, and what appeared when onscreen during the show – so he could match this perfectly with lighting cues – and ensure the two medias worked slickly together throughout to reinforce the sheer power and magic of Vasco’s performance… 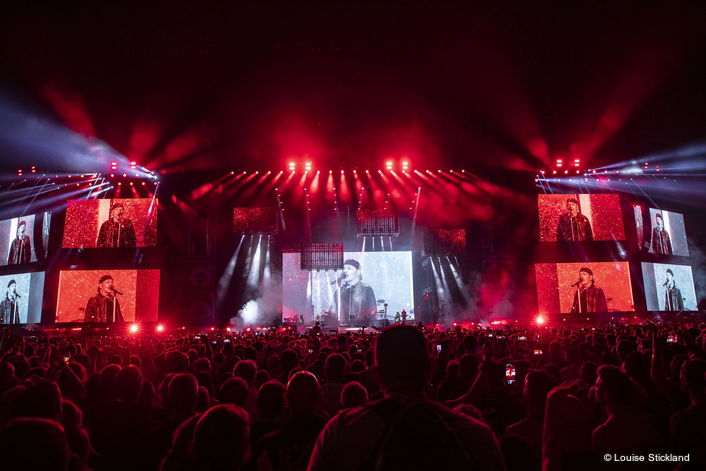 This year they canned the confetti, CO2 blasts and flame jets and instead opted for two breath-takingly effective pyro moments. The first was at the end of “Rewind” when a 125 metre wide gerb fountain ignited along the back wall of the stadium ... and then a jaw-dropping firework finale during the last number ‘Albachiara’ - one of his most famous songs -  brought the show to a highly adrenalized and epic close. 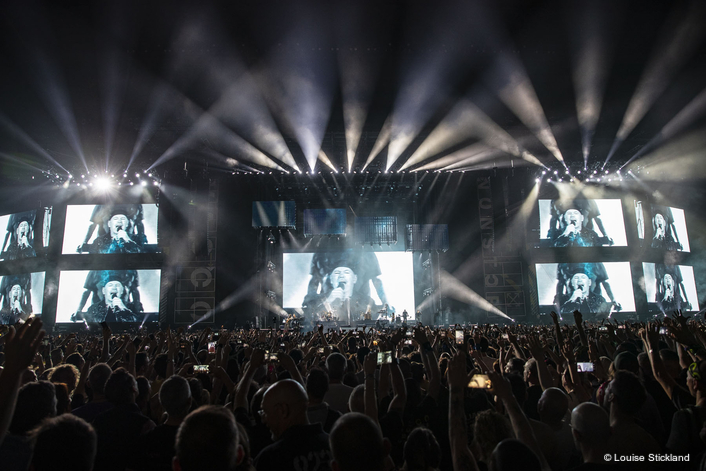 Vasco’s core creative team also included FOH sound engineer Andrea Coresellini, who together with Giovanni and Marco Piva has worked with the artist for over 10 years. They share an incredible imaginative synergy that helps Vasco’s legendary live performances continue to stun and amaze existing and new fans year on year.