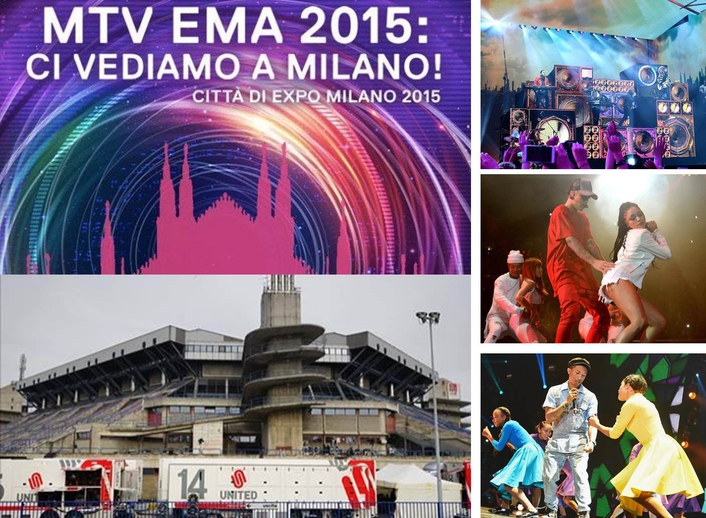 MILAN - will be responsible for the complete registration of the MTV Europe Music Awards (MTV EMA) in Milan. The company has flown in 80 staff members to ensure that one of the world's biggest and most spectacular music events runs smoothly. "Our key words are 'cool', 'huge', and 'lots'," says Bolke Burnaby Lautier, operational manager at United.

This is the third time that United will be providing the registration for the MTV EMA. The broadcasting company, based in Hilversum, the Netherlands, has provided registration for past MTV EMAs held in Glasgow and Amsterdam, but this time there will be a record-setting amount and variety of network equipment. "Each piece of content generated will be available to everyone," says Burnaby Lautier. "All components are in contact with one another through a fibre network and special servers. That allows us to create a complete network that everyone can pull content from.

"Whether they're directing the broadcast in the United States, or they need videos for social media, employees will have constant access to all files," the operational manager explains. "Regardless of what edit or clip you need, like quick shots of stars on the red carpet, we make it easy to pull."

Making all of this possible requires shipping all the production facilities United will need to Milan, including thirteen vehicles (with no fewer than five reporting vans and an audio and DDP truck), fourteen edit sets, 100 monitors, 38 field-cameras, and several kilometres of cable. United has also set up a complete intercom system, through which hundreds of people can be in constant contact with one another. "Communication is essential in a process like this."

Setting up the entire workflow took a week in total. Burnaby Lautier explains, "You're working with multiple time zones and multiple locations. Live and non-live content is constantly available everywhere. It's quite a challenge to manage that well.

"It's fantastic that an organization like the MTV EMA has faith in us. There are a number of players in our field, so it's an honour to be able to put together such a complex show," Burnaby Lautier concludes.

During the MTV EMA, various awards are presented to music artists, with a focus on European artists. Stars like Justin Bieber and Andrea Bocelli will be performing at this year's EMA. Each year, the MTV EMA is broadcast on more than 60 television stations worldwide, reaching a global television audience of approximately 40 million people. The total number of views on the internet is close to 200 million. The 2015 MTV Europe Music Awards will be its 22nd edition.

Watch the setup on VIMEO