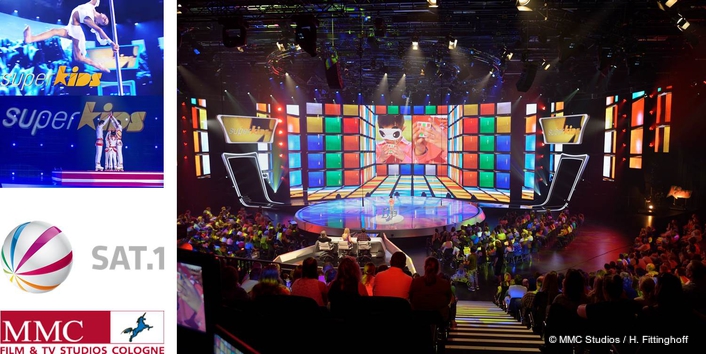 For the duration of three shows, the new SAT.1 talent show “Superkids” lured the audience into the fabulous universe of 36 “Superkids”, aged 3 to 14. Musicians, super brains, dancers, singers, acrobats—and no matter what the forte: only the most extraordinary young talents presented their impressive skills in the big prime time show on SAT.1.

The jury of the “Superkids” shows consisted of Felix Neureuther, Germany’s most successful Alpine ski racer of all times, Henning Wehland, singer and jury member at the show “The Voice Kids”, and Chantal Janzen, mother, musical star and TV presenter for SAT.1. Johanna Klum and Wayne Carpendale hosted the shows. 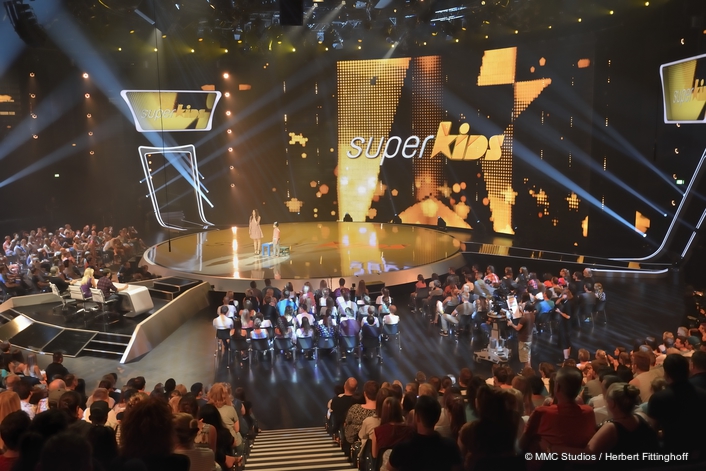 From the 12 talents that performed at each of the shows, the jury and the audience elected the finalists. During the grand finale, that took place at the end of the third show, the three finalists competed once again, in order to delight the audience with their talents. In the end, only the audience voted and decided which of the finalists would win the show and be crowned “Superkid 2015”. The result of the audience voting was clear: with 46%, the street-dance crew PreSkool from Wales was ensured victory.

Nico Roden, Director Sales & Production, said about “Superkids“: „We are very pleased that we were able to provide a big stage for these extraordinary young talents, here at MMC Studios. The success of the new SAT.1 show during prime time demonstrates that we were not the only ones to be amazed with the superkids. Together with the audience, we wish to soon welcome new kids with impressive skills. There is a good chance this wish may come true: a second season is already planned.” 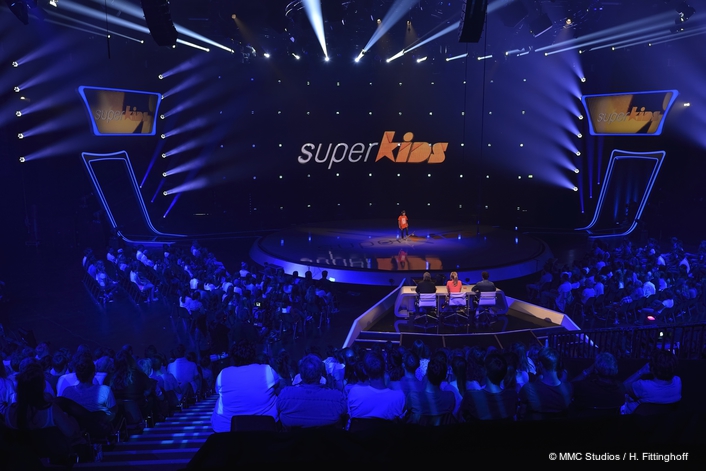 Ratings:
The finale of “Superkids—the World’s Greatest Little Talents” reached 10.6 % market share in the target group, aged 14 to 49 (1 million viewers). A total of 2.37 million viewers (aged 3+) watched the big finale, broadcast from the MMC Studios in Cologne. The new show format achieved such good ratings (up to 11.9% market share in the target group 14 to 49), that SAT.1 made a casting call for a second season of “Superkids”, even before the final show. 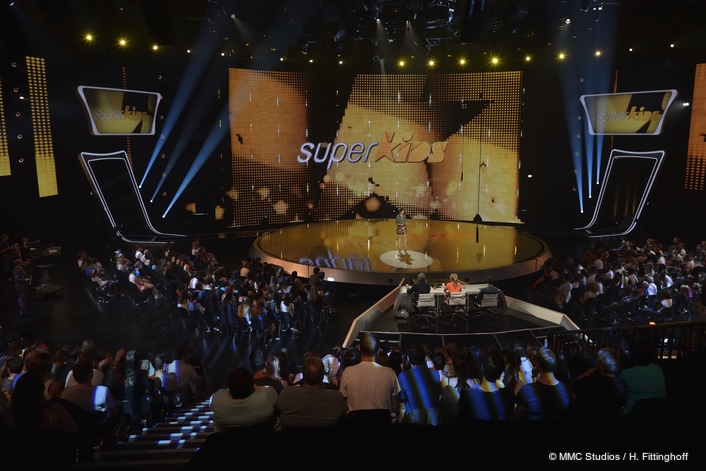 Production:
“Superkids—the World’s Greatest Little Talents” (German title: “Superkids—die größten kleinen Talente der Welt”) is a production by RedSeven Entertainment GmbH. The three shows of the current season were recorded at MMC’s studio 30/31 in front of an audience of 800 at each show, and broadcast on 11, 18, and 25 September, 2015, always at 8:15 p.m. on SAT.1. 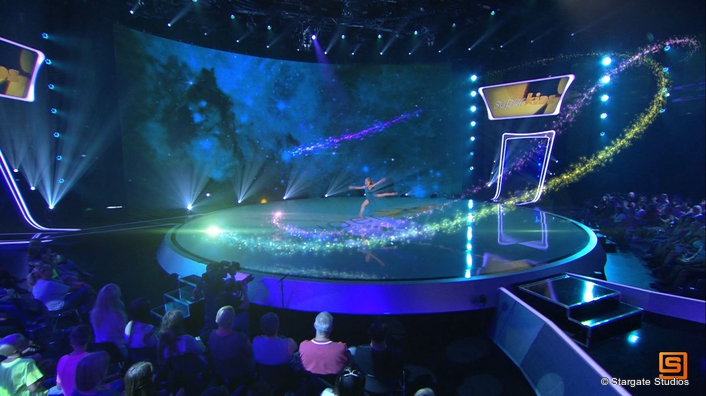 The video signals were mixed on a GVG Kayenne XL (3.5 M/E) at MMC’s HD control room 13 (production format: 1080i/50). The playbacks were carried out via four channels on a Grass Valley Summit Server. One EVS XT2 was used for the highlight editing and Super SloMo. For the tapeless recording, the signals were transferred via eleven ingest channels to a central, mobile, and redundant server system.

For the audio signals, a Sennheiser wireless microphone system, Sennheiser DIGITAL 9000 and 22 microphone lines were used. Additional equipment included a Sennheiser receiving system SR 2050 with a total of 12 in-ear monitoring lines, 5 of which were used for the interpreters. The audio signals were mixed on a Lawo mc256 console in the MMC sound control room 13. 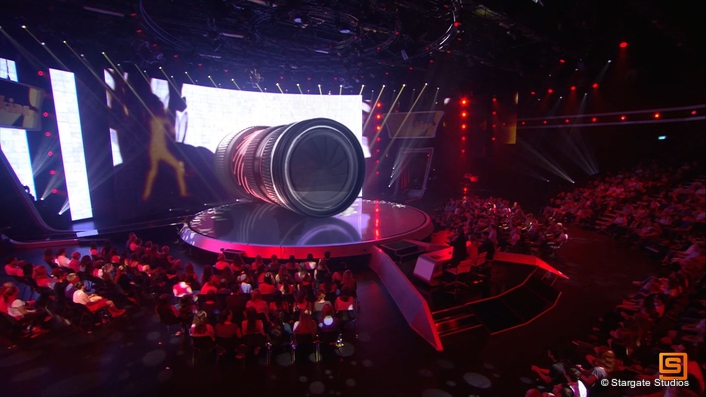 A large optical lens appears on stage introducing the next talent. VFX by Stargate Studios.

MMC’s Art Department was in charge of the set construction for “Superkids”, on the basis of a design by Wieder Design.

The central point of the set construction, built by the MMC Art Department, was the large round stage for the Superkids, with a huge LED wall in the background (18mm pixel pitch), consisting of an incredible 764 single modules. Further LED equipment used in the set construction was 600 meters of LED strips of the B-series by Schnick Schnack. The LED technology was controlled via 3 Green Hippo media servers. 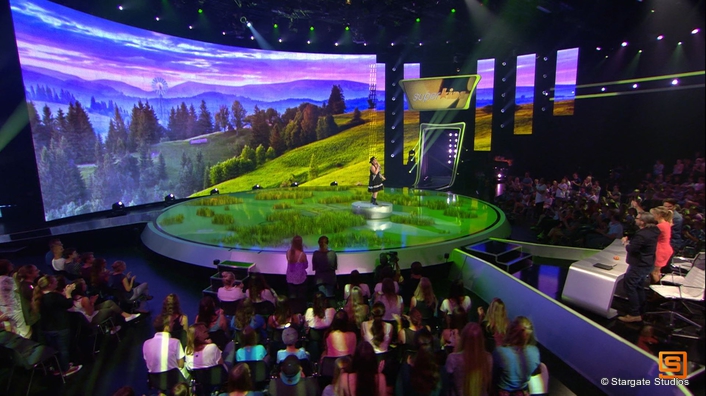 Even grass can grow on stage these days. VFX by Stargate Studios.

In front of the stage, the jury platform with a jury desk was arranged. For the studio audience, a grandstand with a seating capacity of 600 was built; another 200 viewers could take seats in the area between grandstand and jury platform.

For the participants in the show, a 100 square meter big green room, including a seating ensemble, was installed directly next to the studio. The space was surrounded by 32m long and 5m high, printed banner. 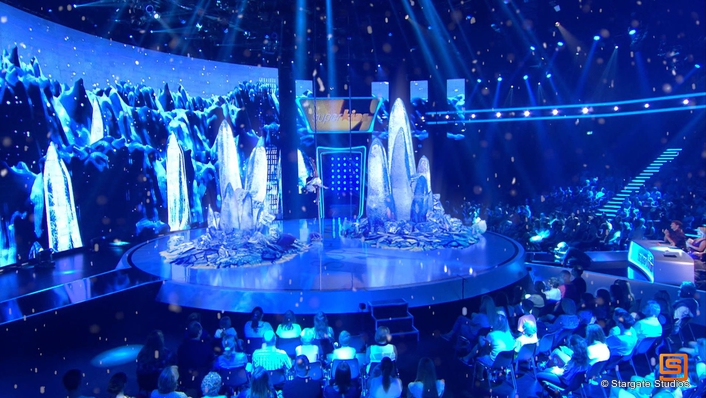 Rocks of ice break through the ground and make the performance even more spectacular. VFX by Stargate Studios.

Augmented Reality:
To enhance the talents on stage even further, Stargate Studios, Cologne, provided visual effects (VFX) which seamlessly merged together with the big LED screen graphics. The VFX specialist used smart camera tracking and 3D elements to extend the virtual environments shown on LED screen in the background all the way to the foreground and even surrounding the talents during their performances. While the live audience was enjoying the atmosphere of the whole show, the audience watching “Superkids” on their home TV sets were excited by the unique colorfulness and surprises created by these VFX. 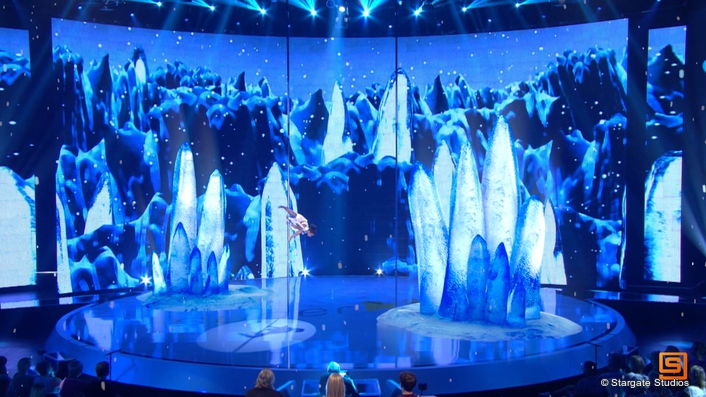 All VFX were supporting two camera angles during the show. VFX by Stargate Studios.

About the MMC Studios Köln GmbH:
The privately held MMC operates one of Europe’s largest and most advanced TV and film studio facilities. MMC Studios in Cologne are the hot spot for every kind of moving-image production in Germany. Through its excellent studio infrastructure, state-of-the-art production technology, its highly efficient post-production, an excellent art department for set design and construction, and its experienced staff, MMC Studios Köln GmbH is the leading service provider for entertainment shows, daily soaps, and TV-series in Germany. In addition, feature films with national and international stars and a wide range of company events are produced in the MMC Studios. In its own Creative Space, MMC’s division “Unicorn Studios” produces fresh web-video formats. eSports and gaming events find excellent production conditions at MMC Studios as well. Since 2015 MMC Studios is on the road as well and facilitates outside broadcasts for their clients with the new OB Truck Ü1.