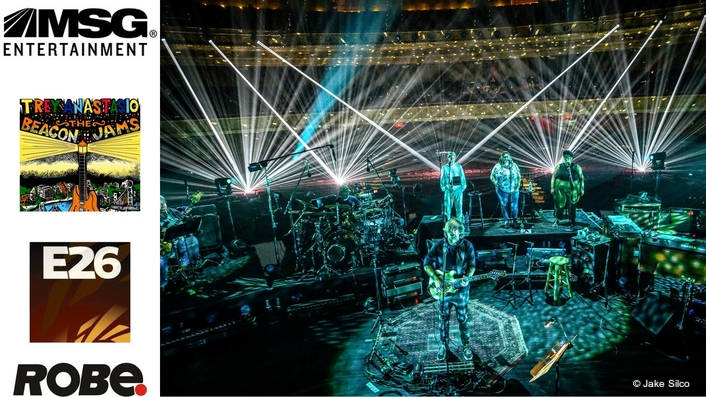 The Beacon Jams were a hugely successful 8-week ‘virtual residency’ presented by guitarist and singer-songwriter Trey Anastasio (AKA lead singer of Phish) and MSG Entertainment in New York City’s iconic Beacon Theatre. The shows were live-streamed free exclusively on Twitch at 8 p.m. every Friday through October and November 2020. The artist played with varied arrangements of his Trey Anastasio Band (TAB), adding and changing line-ups and special guests each week, offering a dynamic mix of live music and interactive entertainment. With up to 12 musicians onstage and the immense challenge of playing live with no audience in such a famous venue, production and lighting designer Marc Janowitz from E26 Design thought out of the box!

His mission was to adapt and redirect the visual drama and ambience that usually accompany a 3000 strong live audience as well as light all the performers slickly and efficiently for TV, a task achieved with style, panache and the help of almost 200 Robe moving lights and LED fixtures. Once The Beacon Jams concept was established, Marc – who has designed Trey Anastasio’s live, solo, and acoustic projects for 9 years – and camera director Trey Kerr landed on the idea of flipping the room with Trey standing in his usual front / lead position, but with his back to the auditorium and the band fanning out around him. The onstage area then became a backstage / studio workspace. 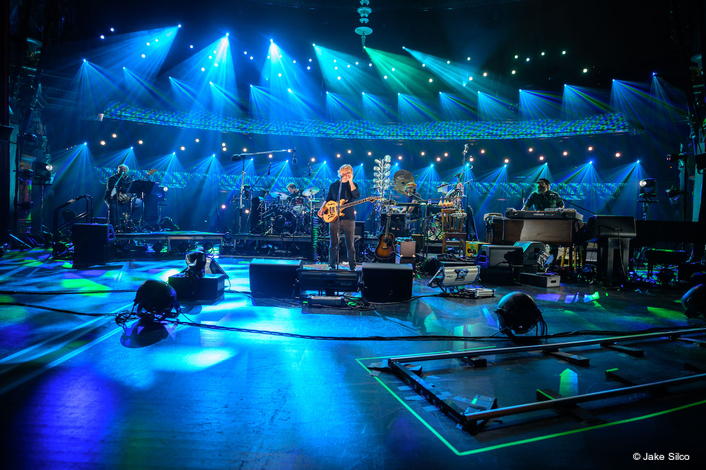 With this spatial relationship established, the task was to find interesting and exciting ways to make the most of the auditorium for lighting positions that would produce that very special atmosphere they wanted. “The concept was to create an environment that could never be achieved if we were staging a standard concert – to embrace the possibilities rather than lament the limitations,” stated Marc.

“We crafted a bespoke space rather than performing in an empty room,” explained Marc. “We didn’t want it to be a concert, the idea was always that these performances were specifically developed for the viewing audience at home.”

They did not want to install lots of classic “concert” trussing and metalwork structures. Instead, the quest was to preserve that unmistakable Beacon Theatre look while creating an intentional TV studio environment on stage.

Without a single pixel of video screen in sight, Marc wanted some sort of general ‘sky’ lighting and subtle twinkling star effects that could create an aura alluding to there being a big space out there, but not showcasing empty seats.

He hit on utilizing 90 x Robe OnePATTs – a single RGBW LED light source housed in a brushed metal frame – which were scattered around the stalls and balcony seating, almost like faces in a crowd!

Once the positioning was optimized, these produced fantastic atmospheric background, bokeh and back of camera effects.

They were attached to mic stands which were super-light and easy for the crew to position. 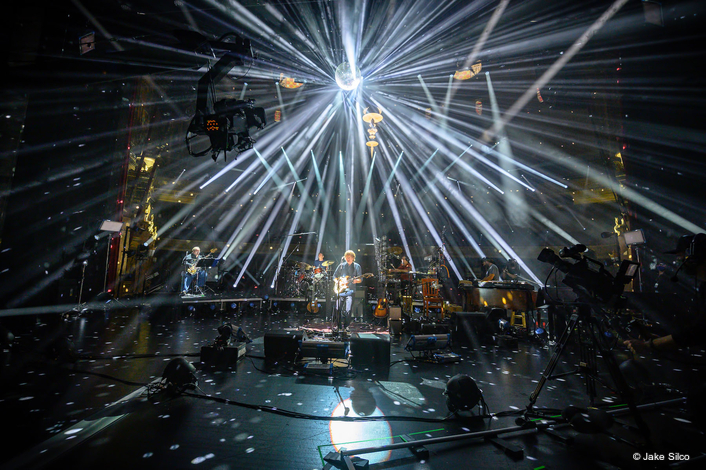 With this layer of lighting in place, Marc next worked on having different lighting options available for every camera perspective for which he needed numerous compact multifunctional lightsources … and again thought of Robe!

Spikies he had used on other projects, at the Beacon Theatre 36 of these tiny ‘single pixel’ LED moving lights proved perfect for accentuating the contours of the auditorium in the wide shots, with 18 along the top of the balcony and 15 in the loge immediately below. These produced an elegant and powerful curtain of light beams from all angles.

The Spikies looked fantastic for atmospheric effects, however the main practical back lighting was from a row of 12 x BMFL Spots, picked for their “very bright, tight, sharp and crisp” output, which were positioned at the rear of the upper balcony, rigged on goalposts.

They swept grandiosely and decisively down to the stage at a dramatic angle, looking exceedingly cool and creating classy contrasts with the tighter Spikie beams, adding substantial depth for the cameras.

“I knew I could count on BMFLs to seriously punch through at that 125 ft throw distance, and offer all the features and flexibility needed over the 8-week run,” observed Marc.

Also picked for their intensity and diversity were 16 x Robe MegaPointes, with six rigged on the balcony rail and the other 10 around the orchestra stalls at floor level, just behind the band.

With these ‘horizon lines’ of BMFLs, MegaPointes and Spikies, Marc could also highlight elements of the venue’s impressive interior architecture and features. It was originally designed as a movie / vaudeville palace by architect Walter W Ahlschlager, opening in 1929.

To complete the picture with a low horizon line of lights, he wanted another row of smaller light sources at the bottom and back of the shots and chose 24 of Robe’s new Tetra2 moving LED battens. 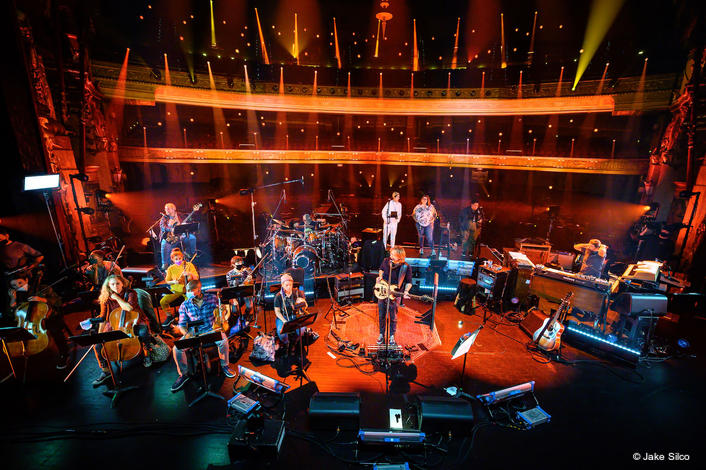 Some were installed end-to-end underneath the first balcony edge, producing striking camera flare and other interesting lens aberration effects adding to the atmospheric engineering toolkit. These units would also tip up and graze the front edges of the loge and balcony. More Tetra2s in front of the band risers brought the effect closer to the cameras.

Featuring the same Robe multi-colored flower effect (MCFE) as the Spikies, Marc fully explored working these and the Tertra2s harmoniously.

With his FOH and auditorium lighting set up meticulously to hint at the vastness of the space but bring the visual focus right down to the intimacy of the musicians on set, Marc took a more conventional route with the over-stage lighting.

Twelve Robe T1 Profiles were among the main overhead key / specials light sources, together with an assortment of other luminaires including profile moving lights, a selection of LED soft lights, fresnels, blinders, etc., all rigged – more traditionally – on the house fly bar system, on C-stands and on the floor.

Marc and his assistant Patrick Hayes programmed on two Hog 4 Full Boar consoles. During the streams, Patrick looked after the architectural details while Marc ran everything pointed directly at the performers and cameras.

Only a fraction of the songs performed were from Trey Anastasio’s classic touring shows, the vast majority were new works or re-arrangements, some were acoustic or unplugged versions and many featured additional elements like strings.

While it made sense to start from the last touring show file, the programming changed quickly and radically to accommodate the new material and the design.

Each week new sonic and visual surprises would delight fans tuning in to the stream, anything from the surprise guests appearing onstage to Trey Anastasio’s physical entrances or exits, which included walking in off-Broadway and out through the front doors! 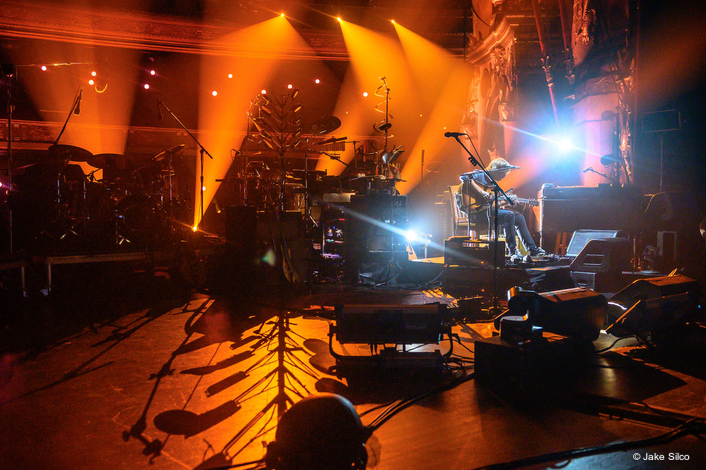 The final week culminated in an end of tour / residency gag!  The artist finished his finale song, walked out through the auditorium to the front foyer to find it filled with 30 dancers who performed a choreographed piece before he exited by those renowned front doors and onto the street, disappearing into the night!

Marc loved this way of working! It demanded the discipline of concentration on one hand, merged with the free flow of rhythm, harmony and feeling the music.

Lighting was delivered by two vendors, Pulse Lighting in Nashville who supplied most of the Robe kit and World Stage from New Jersey who supplied the Robe T1 Profiles, plus most of the other television lighting fixtures and all the cable infrastructure, power distribution and structural hardware.

“Both companies were instrumental to the success of the project, offering great service and dedication,” commented Marc, adding that he felt “fantastically blessed” to have this period of working during the pandemic where the live event and entertainment sectors have been amongst the hardest hit.

All proceeds from The Beacon Jams donations will benefit Phish’s long-running, non-profit organization the WaterWheel Foundation, and its new Divided Sky Fund (DSF) whose initial goal is to build a quality care addiction treatment center in Vermont