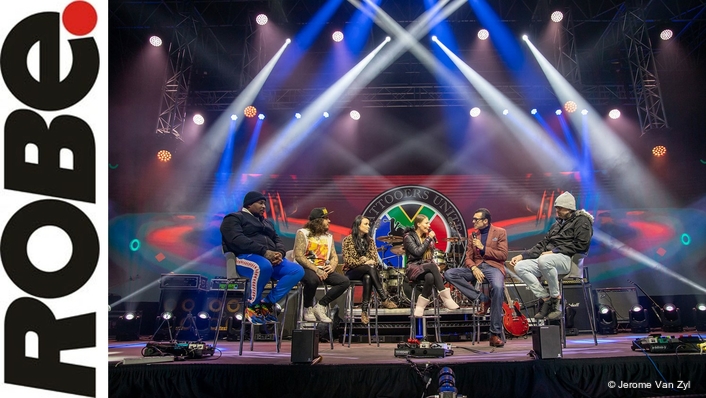 “Play It Forward” an incendiary new live show by South African rockers Oooth – well known for their love of high production values and visual stage presentations – was part of a dynamic live stream designed as a fundraiser for tattoo artists across the country and freelance technicians via #FeedOurCrew who have been left high and dry and without any income during the Covid-19 lockdown. The broadcast – on YouTube and Facebook Live – also included interviews, features and panel discussions, and was staged at leading SA rental company MGG’s Studio B facility, one of two such facilities at their HQ in Johannesburg, complete with a full Robe lighting rig.

Reaching around 6000 fans, whilst ‘Play it Forward’ was airing, South African President Cyril Ramaphosa announced that the following day tattoo artists and studios would be able to re-start their businesses. On hearing this fantastic news, they in turn made a collective decision to donate the proceeds to #FeedOurCrew, an NGO which is providing basic needs and essential relief for event industry freelancers whilst large gatherings and shows are still banned. 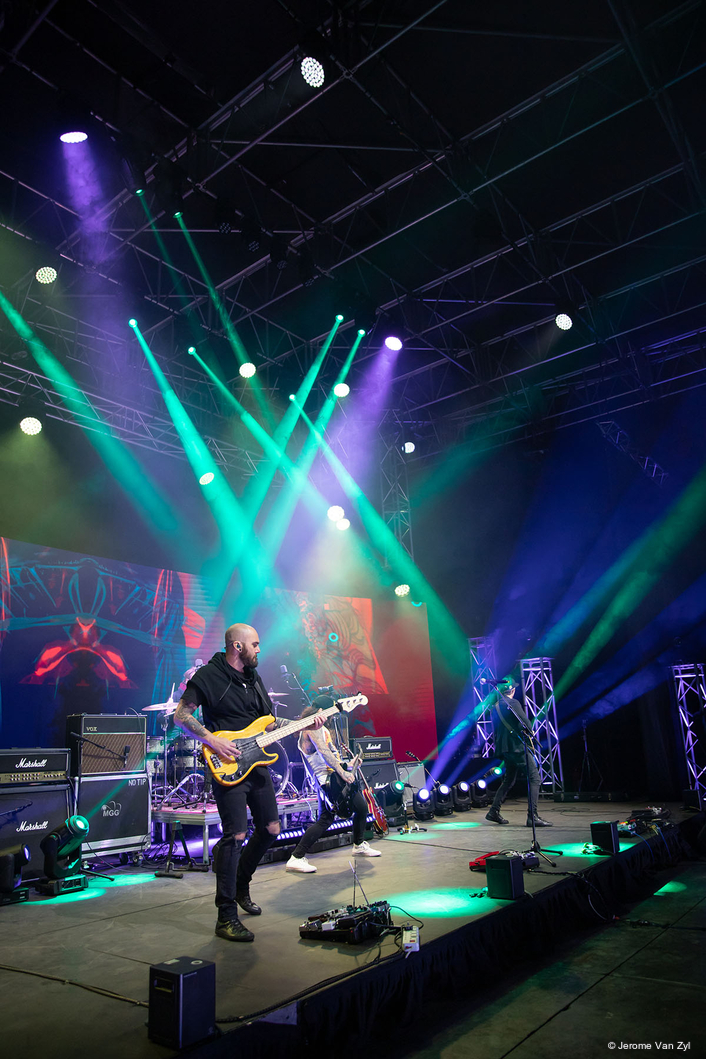 MGG’s Johannesburg Studio B is the largest of the two at around 16 x 16 metres – allowing for a good amount of social distancing – and has been set up in their structures warehouse since the lockdown, as the company has reorganised and re-purposed itself to deal with radical changes in its current business. With a decent amount of headroom, its ideal for rock ‘n’ roll style streamed shows ... which have been produced there since SA instituted level 3 lockdown on June 1st. 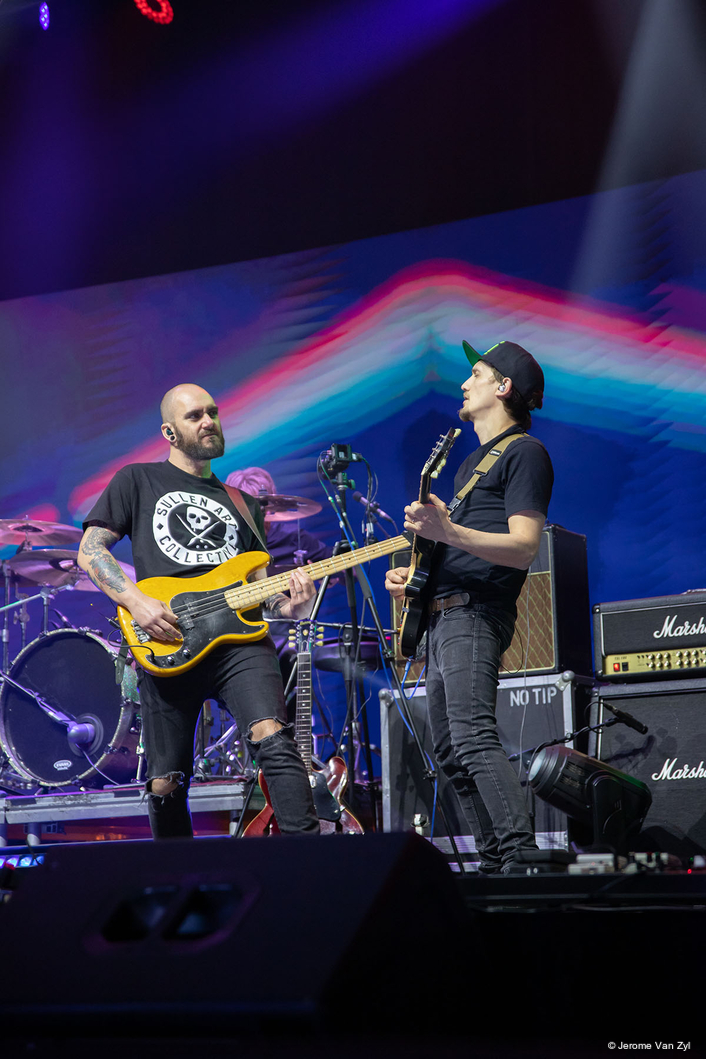 MGG’s talented and resourceful resident lighting technicians Sipho Kekana and Hein Ströh worked together to design the lighting for both Johannesburg studios (MGG has a third at its Cape Town branch), and their input included specifying the 50 x Robe moving lights.

It includes six of MGG’s new Robe ESPRITE Profile LED units with the transferrable engine, purchased just before Covid-19 brought the industry to a standstill, together with Pointes, Spiiders, Spikies, LEDBeam 150s, LEDWash 600s, DL4S Profiles, CycFX 8 and Tetra2  moving LED battens ... all of which were picked for their versatility and multifunctionality. 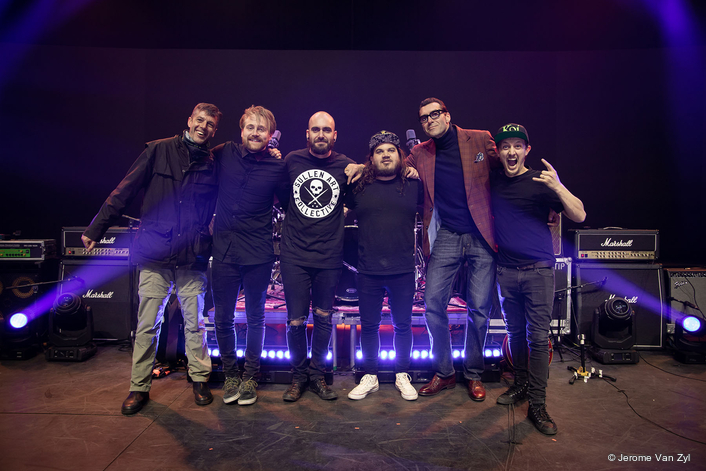 Most of the fixtures are LED light sources to save on daily running costs and assist with keeping temperatures lower and more comfortable without having to crank up the AC excessively.

The ESPRITES are the principal key lighting and are used for accurate framing and sharp shuttering work, and their range of colour temperate whites works superbly on camera.

The LEDWash 600s are the studio’s workhorse wash lights together with the Spiiders which can also add extra pixel effects and work as both beams and washes.

The CycFX 8s provide front fill light and footlights to help eliminate eye and nose shadows, while the little Spikies are upstage on the floor punching away with vibrant, dazzling beam effects projected behind the artists.

The Pointes are rigged in the roof grid alongside the LEDBeam100s for additional beam effects and gobo to evoke the vibe of performing on an authentic live stage.

All of these are controlled via a grandMA2.

“There has been no better choice of light for us here than the Robe LED-based fixtures,” commented Sipho.

Studio B has four Canon HD camera kits installed to catch every angle, all mixed on a Barco FSN switcher with the band all utilising Shure PSM 1000 in-ear monitors engineered via a  DiGiCo SD12 audio console in a totally separate control room together with a pair of L-Acoustics 108Ps for the reference mix. 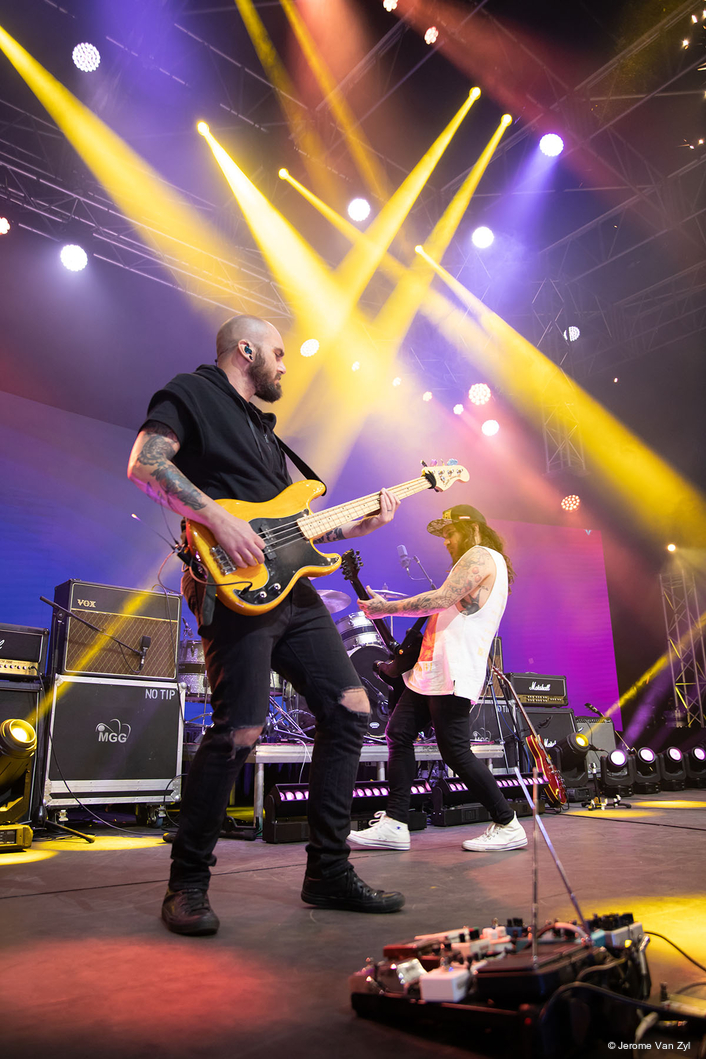 MGG’s studio technical crews are working in “bubbles” so they are fully Covid-19 compliant, and as with all employees and in fact anyone entering the building, there are regular temperature checks, social distancing imposed, compulsory mask-wearing and abundant sanitising facilities throughout.

Oooth are a 4-piece band with some serious attitude, fronted by Jason Oosthuizen ... who is a multi-instrumentalist and a drummer in several other bands which he also manages. In Oooth, he swaps his back-of-stage comfort zone, adds a guitar, and struts his stuff front and centre! The change in perspective keeps him fresh and energised.

Not that there are many dull moments in his schedule! He also has his own wine, coffee, and clothing brands … and plenty of tattoos … which is where this project started – to highlight the incredible skills, creativity, and philosophy of body art.

Jason also takes a keen interest in production and ensuring that his bands always look and sound fantastic, “it’s all part of the audience experience”. Oooth have their own PA and some lighting and are hoping to invest in further lighting when the industry gets moving again.

He was delighted with the results of the stream.

“It looked and sounded amazing,” he commented after the show, really appreciating the “skills and professionalism” of the MGG crews and technicians plus all the energy and enthusiasm that everyone put into making it memorable.

Not having played properly for a couple of months, after an animated set, he admitted to a few aches and pains the following day!

As well as MGG supporting this fundraiser, Robe’s South African distributor DWR was extremely proactive in the realisation of “Play It Forward” and has also been an avid contributor and supporter of Feed Out Crew. 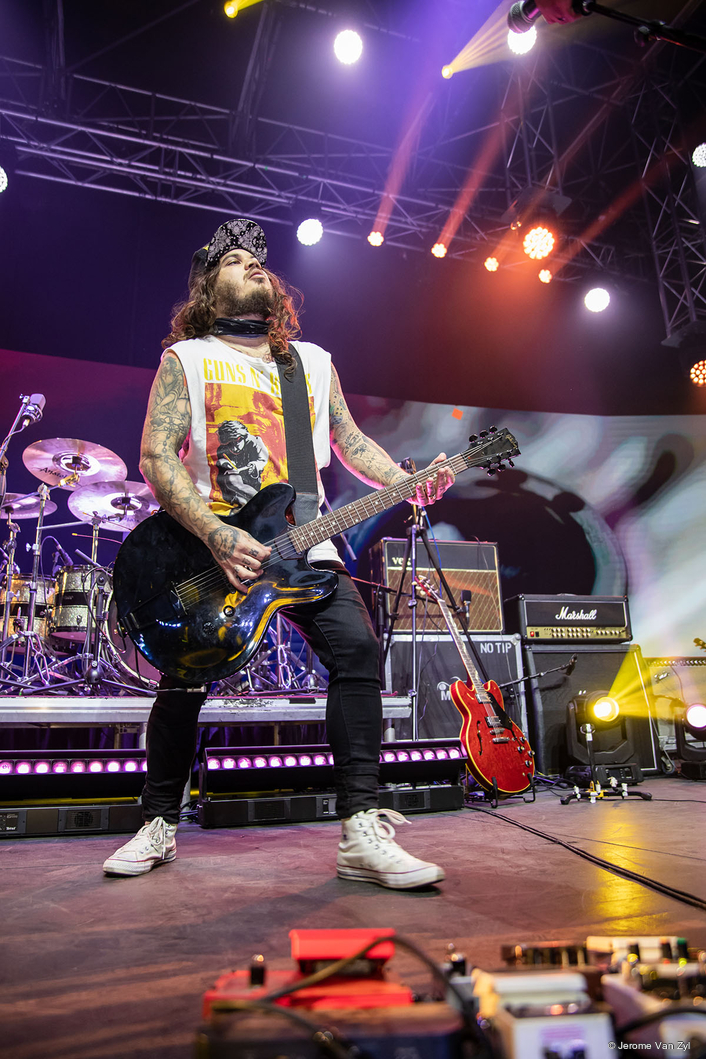 About Feed Our Crew

#FeedOurCrew was established during lockdown by MGG’s Tamsyn Strydom and Kagiso Moima from Blackmotion. It is a non-profit organization that has distributed hundreds of grocery vouchers to assist theatre and technical freelancers left stranded by the government’s current relief programmes. The SOS Charity fund, an initiative started by Robe’s South African distributor DWR, has also financially backed this project.