For the tenth time now, the PRG Live Entertainment Awards (PRG LEA) were presented on 14 April 2015 in the festival hall in Frankfurt in front of an audience of over 1,300 guests from the national and international music, event and entertainment scenes. With a total of 15 awards, event organisers, artist managers, concert agents, venue operators and artists were recognised for their excellent achievements in the live entertainment industry.

The PRG LEA gives all the creative players and organisers who contribute great ideas and extraordinary energy to the work behind the scenes the opportunity to have their special achievements in the show and entertainment industry acknowledged. Only music journalists and professionals from the live entertainment sector form the expert jury who decide on nominations. 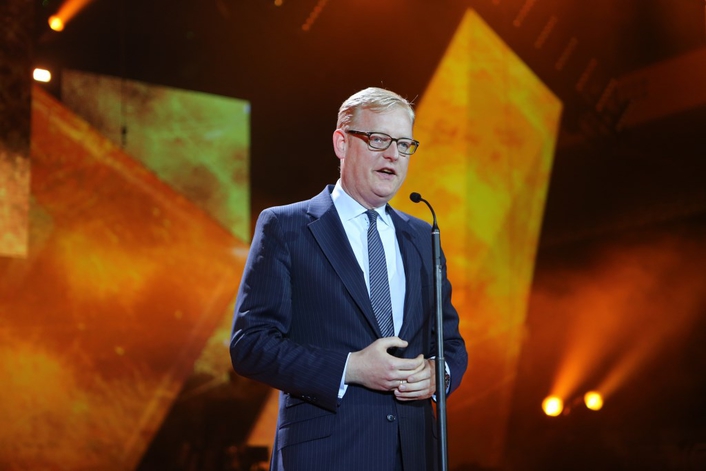 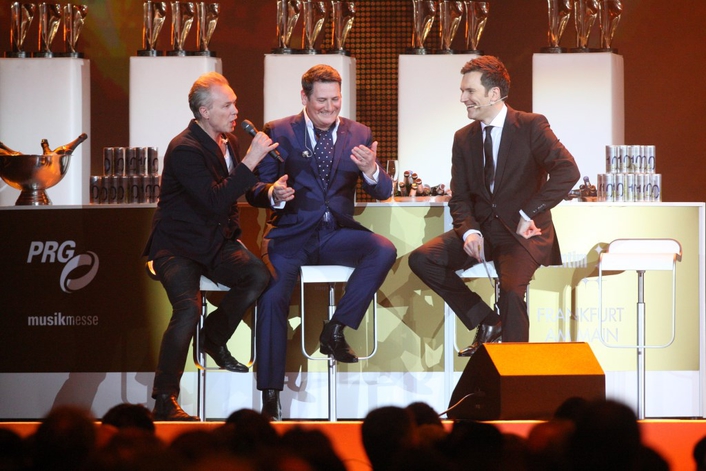 Despite all the glitz and glamour of this brilliant live show, the audience was moved by one special prize awarded spontaneously on the night by the organisers. The manager of Die Toten Hosen Joachen Hülder, who passed away in January 2015, was recognised posthumously for his life's work as artist manager. Singer and front man Campino himself accepted the award for Hülder in this emotional moment.

LEA success story
Since its premiere 2006 in the theatre tent of the Fliegende Bauten ensemble in Hamburg, the LEA has become one of the major awards in the entertainment industry in the category of ECHO and Deutscher Filmpreis in just only ten years and has established itself as one of the most important German cultural awards. The stylised concert ticket – solid bronze cast weighing 3.5 kilograms – has now become a much coveted trophy in the show and event sector. The LEA nominees and award winners reflect the entire spectrum of the live show and entertainment scenes, with all their creativity, innovative ideas and success stories.

Spectacular stage design
The PRG Live Entertainment Award 2015 hosted an impressive live show with an awe-inspiring and varying stage design and extraordinary technical equipment. The stage set, built out of white, polygonal elements, could be moved during the entire show by means of many motors at different positions. With eight high-power video projectors, changing motifs and diverse backgrounds were projected onto the white surfaces – synchronised to the performances and moderation on the stage.
With over 700 lighting fixtures, Germany's top light designer Jerry Appelt (also responsible for the design of the Eurovision Song Contest 2011 in Düsseldorf) lit the stage with different lighting effects and moved the show through different moods. Reducing power consumption was also taken into account here with the use of high-efficiency LED lamps. 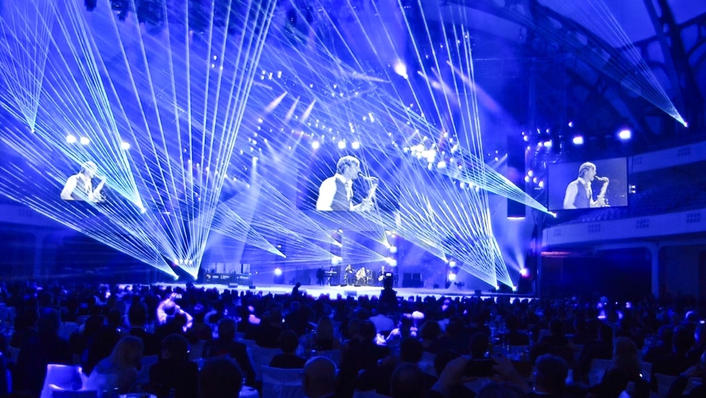 The challenge: wireless microphones
beyerdynamic’s TG 1000 is a remarkably reliable digital 24-bit wireless system. With an impressive bandwidth coverage of 319 MHz in the UHF range (470-789 MHz), the TG 1000 can be used for a wide range of applications worldwide. A total of 28 channels were used with the TG 1000: 16 channels serving the live performances and 12 for the moderation and speeches. 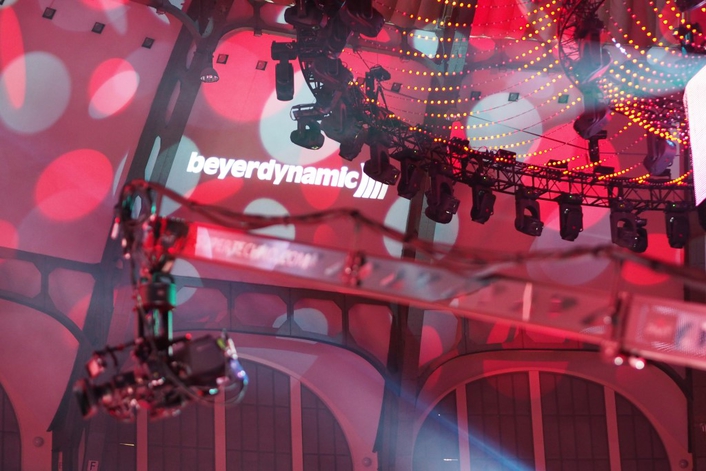 As an event venue, Frankfurt am Main generally poses a major challenge for such a production with many wireless channels because there are eight DVB-T channels there that block a large part of the available frequency spectrum. The music fair taking place at the same time in the neighbouring exhibition halls complicated the problem by occupying additional frequencies. The use of many LED lamps and walls during the spectacular shows on the stage and the HF interference they pose was also an added problem to using wireless microphones. 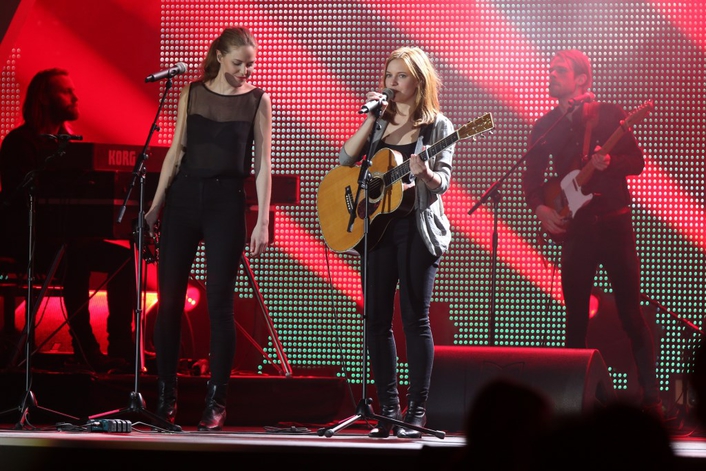 On top of the 28 TG 1000 channels, another 10 in-ear monitoring paths and 18 additional wireless microphones from Spandau Ballet had to be operated reliably. They were the only live act to use their own microphones independently.
Frequency coordination in such surroundings is therefore the most important part of the preparation and production of such an event and allows you to react quickly to unexpected situations. And such a situation did arise: during the event (and in spite of prohibiting them in advance), ENG teams were using wireless microphones on the same transmission frequencies as the event microphones in the hall and therefore caused massive transmission problems. Fortunately, these “disruptions” could be kept to a minimum, but only thanks to good teamwork and switching to alternative frequencies quickly. 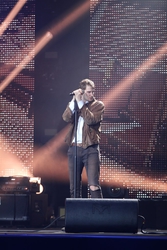 Despite all these difficulties, the TG 1000 digital wireless system from beyerdynamic was again able to demonstrate its formidable performance to the full. Especially its impressive frequency range, which offers a high level of flexibility, made it a lot easier to find alternative available frequencies. 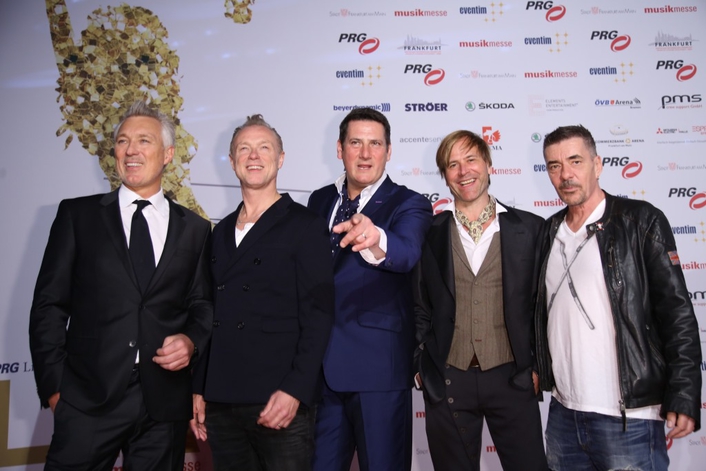 Two MC 930 microphones were used as atmosphere microphones together with a pair of WA-ATDA passive/active rotational wideband antennas. These microphones transmit the atmosphere for the in-ear monitoring systems that the artists use. Without them, the artists would not be able to hear the audience at all.
As vocal microphones in the live performances, handheld transmitters with TG V50w interchangeable microphone capsules were used exclusively by the singers. Guitar and bass amplifiers were captured with both M160 and M88 TG as well as TG I50d microphones. And for the drums, the show made use of the entire range of beyerdynamic drum microphone technology: TG D70d for kick, TG D50d for snare top, M201 as snare bottom microphone, MC 950 for hihat, TG D57d and TG D58d on the toms and MC 930 as overhead microphones. The MKV 87 proved its excellence again as an extremely practical and sturdy microphone clamp.

Each live act was able to leave their backline (instruments, amplifiers, etc.) set up on risers (rolling platforms) backstage which meant that the microphones were also left on the instruments. This saved a great amount of time normally needed for changing the setup between each act, and the microphones could be perfectly positioned beforehand at the soundcheck. Only the vocal microphones needed to be distributed between the different acts and sometimes had to be used twice.

All in all, the TG 1000 digital wireless system and microphone technology from beyerdynamic was a clear winner with its ease of handling and especially its impressive sound at this technically challenging live event.