Picture This with Robe in Dublin 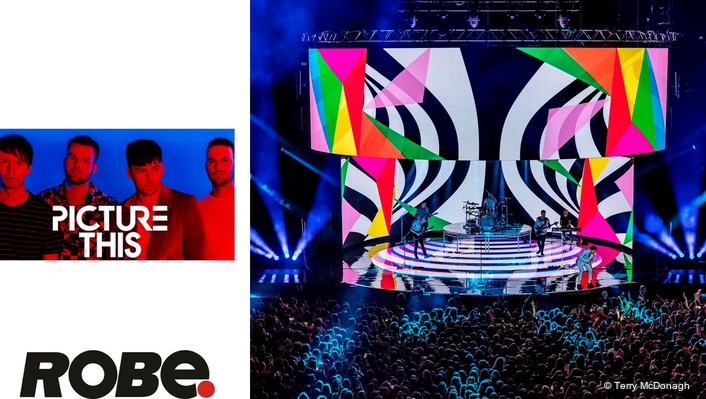 Picture This are simply the hottest band in Ireland right now! The buzzzz started in 2016 when childhood friends singer / guitarist Ryan Hennessey and drummer Jimmy Rainsford from Athy, County Kildare, recorded their first song “Take My Hand” and made an accompanying iPhone video which they posted on YouTube and Facebook … where it went viral and received millions of views!

Proving that they were so much more than an internet flash-in-the-pan, the duo’s first ever live gig at the Grand Social in Dublin sold out in less than 30 minutes … so it was moved to the 850 capacity Academy which also sold out as they became the first band ever to achieve this on their debut gig!

Their eponymous first EP rocketed to the number one slot in the Irish charts in 2017, and last month this truly meteoric rise to fame and into the hearts, minds and ears of a young fanbase came full circle as they played a record five sold out nights at Dublin’s 3Arena. This beat U2’s 4 nights and offered a lively, show-stopping performance to 60,000 adoring fans!

Liam worked closely with the band and created some initial set and visual concepts based on their ideas of initially wanting a circular video screen – which was developed into two curved screens. Video content director Darragh McAuliffe and the team from content producers Algorithm were commissioned by Just Lite’s Paul Smith with input from the band. The IMAG camera mix directed by Brian Judge was also a big part of the show’s overall visuality.

These five shows were essentially a one-off, although the production evolved aesthetically with future festival work / larger venues and touring adaptability also in mind. It was Liam’s first gig with the band apart from the finale of a recent tour at London’s Kentish Town Forum.

The LED screen was split into two elegant curves. The upstage one measured 15 metres by 3.6 metres high and wrapped around the back of the band, while the front one was 25 metres wide by 3.5 metres high. This started off on the floor at the top of the set, rising to trim where it sat in a ‘crown’ / header position. 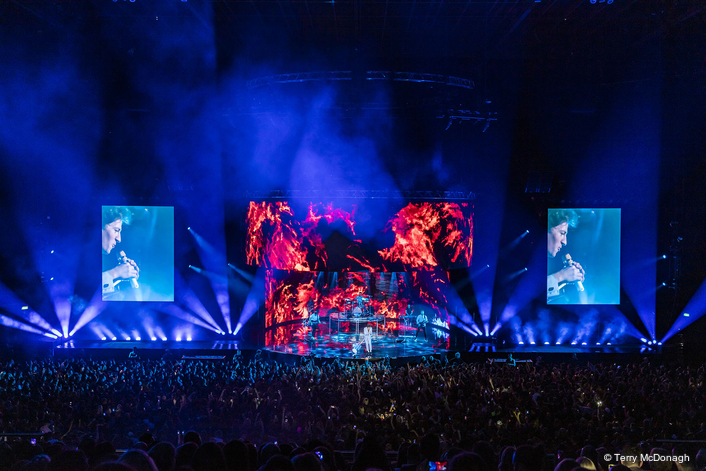 Both these curved screens were on a Kinesys automation system … and they moved in and out at strategic points in the show adding additional “WOW” to the picture.

Once the final physical video configurations and screen positions were established together with the stage left and right IMAG screens and the stage wings, Liam designed the lights around these shapes and objects.

Behind the back screen were three 18-metre-long trusses with the offstage 6 metre sections on each side angled to form a ‘linear curve’. These three trusses were stacked almost on top of each other, the bottom one 5.5 metres off the stage deck with the top one at 8 metres.

Then over the stage was a three-quarter section of a 14-metre diameter circle supporting the ‘back’ LED video screen and rigged with some audience blinders; then a 12-metre half circle rigged with the front screen. Inside all of these was a 6-metre full circle populated with 16 x Robe Pointes.

All these circles – the two video ones and the central lighting one – moved on the Kinesys system that was supplied by UK Rigging. These movement cues created some simple but massively powerful moments during the set.

A 12-metre front truss was split into three pods to get the best coverage over the stage space and there were six side torms in various positions for cross lighting. Some small trusses over the IMAG screen positions were used for more blinders.

The 16 x Pointes on the centre circle were joined by 12 on the back of the circular floor, and the other 18 on the three upstage trusses where they were used for some spectacular ‘light wall’ effects plus all the fabulous looks and effects variants at which they excel!

Creating dramatic and bold expressionist looks one moment, flipping to delicate subtleties the next, Liam enthused “Pointes continue to be one of the most brilliant beam and effects fixtures on the market!”

The Spiiders were spread between the downstage trusses for key light with 12 upstage on the floor and 18 on the back-wall trusses … from where they blasted nice even washes across stage and Liam took advantage of their potent fat beams for some nice geometric looks. 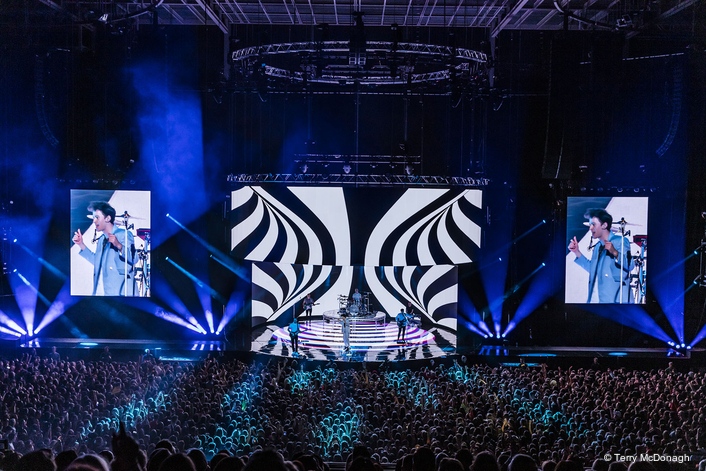 The BMFL Spots were positioned on the downstage trusses for key light, with 12 on the stage left and stage right torms and 18 on the three upstage trusses.

The SuperSpikies were on the floor at the start and end of the set ego ramps, with the LEDWash 600s on the wings beneath the IMAG screens each side!

Liam is a big fan of Robe products. In fact, he’s been using them since the brand launched in 2002 so that’s an impressive 17 years of loyalty, and Robe is frequently at the heart of his designs for major music and television events for its versatility and reliability.

He’d used all of these many times before apart from the SuperSpikies for which it was the first time, and he commented: “For an LED unit to get such a beam over long distances was impressive. The colours are great and match up beautifully with that of the other Robe fixtures”.

He controlled all the Robes and other lights via two Road Hog Full Boar consoles – live and backup.

The biggest challenge was lighting around the various screen positions, as sometimes the screens blocked parts of the rig. When this happened, they capitalised on the LED floor to add some colour and lumens onto the band and stage.

They wanted lots of expansive looks and plenty of colour but not too many at once, and so this was one of Liam’s missions, along with matching lighting colours to some of the video content.

Liam has worked with Just Lite for many years, and they are his go-to company for “larger than normal and special shows” like this. Just Lite invested steadily in Robe right from the start and has enjoyed a long and productive relationship with the brand. 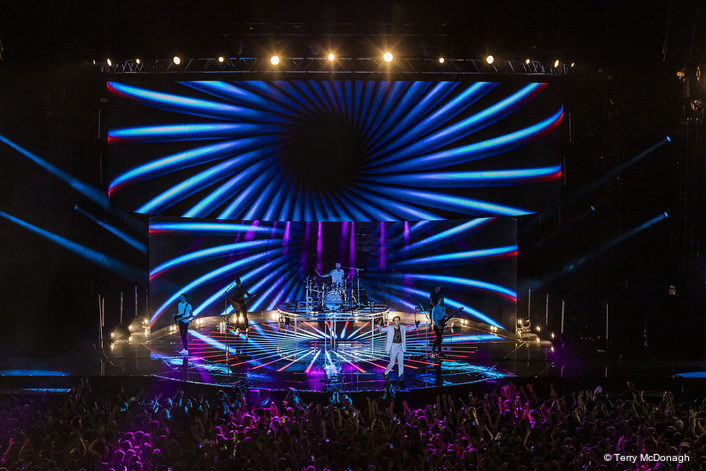 They have an extensive Robe inventory now, and all lighting was sourced for these Picture This shows without the need for any sub hires.

“I think Robe are right at the top of their game right now in the world of moving lights” he concludes.