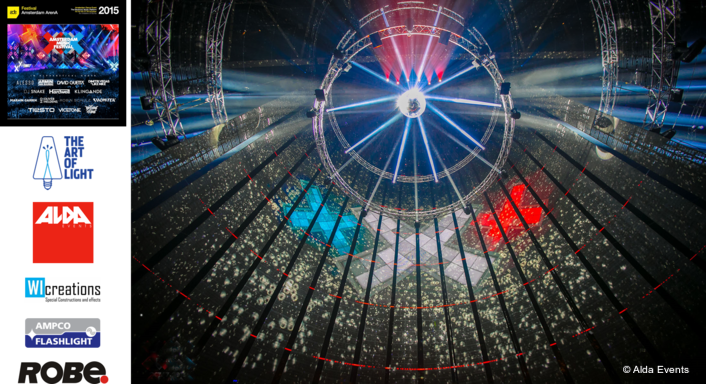 Two days of absolutely banging dance vibes from some of the biggest EDM artists on the planet including Armin van Buuren, David Guetta, Hardwell, Tiesto, Alesso, rising star Martin Garrix and many, many more … pulled thousands of music fans into the Amsterdam Arena for the 2015 Amsterdam Music Festival (AMF). This topped off the five day annual Amsterdam Dance Event (ADE) which featured with 350 individual sub-events across 80 venues and clubs in the city.

Lighting for this hi-energy extravaganza was designed by André Beekmans of The Art of Light; leading  in  creative light design practice in the Netherlands, working closely with scenic designers 250K for organisers Alda events.

André has been involved since the first AMF. This third edition of the event was also recorded for future broadcast and live streamed over the internet, all of which needed to be taken into consideration when lighting the shows.

A big challenge – and the main objective - for the lighting design, was to make the vast barn-like arena packed with thousands of people feel like a small intimate club space. This is also where the experience and imagination of André and his team kicked in to elicit some stunning results, integrating techniques from the world of theatre, dance and TV and sharing them with EDM communities worldwide.

Multiple trusses were flown in the roof forming a loose grid infrastructure above the stage and audience, with lights rigged along all sides and at intervals down the length of the auditorium, so ravers could be caught up with the sweeping BMFL beams and pulled into the intense energy and pumping bass levels coming offstage, a bold hi-impact effect that worked exceptionally well.

It was also vital to have strong lighting coming into the picture from the back of the stage behind the DJ, shooting down the length of the arena skimming people’s heads to ensure they were scooped into the action from all sides.

The 101 BMFL Spots were the main effects lightsource and as such, the workhorses of the show. They were positioned on various trusses above the stage and the arena, and played across the entire space, involving the audience in the fun as well as registering really well on camera.

André uses Robe a lot in his work right now, the reliability of the fixtures make them ideal for the harsh operating conditions of EDM events – and he also likes the quality and finesse they can bring to any situation. They have used BMFLs on various shows throughout the year, but this was the largest amount to date to feature on a project of The Art of Light.

It was also the first time they had used the BMFL Blade. These were deployed as key lights and front lights for the Awards section of the show. André was impressed with the power and the focusability as they were throwing a good 27 metres to the stage. The Art of Light actually introduced the trend of key-lighting DJs after several years of them being left in the dark concealed behind a wall of visual overload!

The 94 x Pointes – chosen for their versatility - were primarily distributed around the stage area with 34 of them on the floor outlining the space. The rest were on four moving circular trusses contained within two scenic cylinder flying props, each made up of eight thin metal rings outlined with LED strips.

They offered multiple looks and an endless stream of variations throughout several hours of full on performances.

The main curved video screens – which also rotated - were in the centre of these two cylinders. The 180 LEDBeam 100s were mounted on the back of the LED panels, so as the arcs of LED panels rotated around to face upstage, they were revealed in a blistering wall of tight firing out super-punchy beams that completely transformed the room making a big accent to the amazement and delight of the crowds!

The video arcs could also move forward on the upstage / downstage axis. 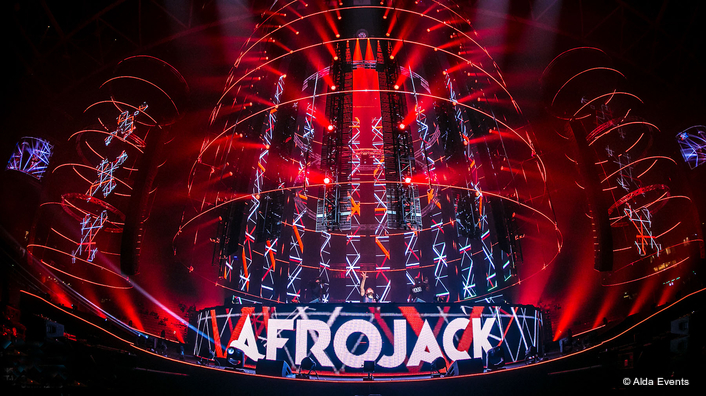 All lighting kit – including approximately 450 more lights - was supplied by Flashlight. The automation system was designed and supplied by engineering specialists WIcreations.

The challenge – as is often the case – was the tight get-in and technical time which could not commence until the Dutch soccer team finished their match on the Tuesday night.

Knowing this, André planned a week of pre-production at The Art of Light in Eindhoven with his lighting operators, Bas Scheij and Michael Seeverens, where they were able to visualize the building blocks of the show, pre-programme the grandMA 2 consoles used for control and arrive onsite well prepared. 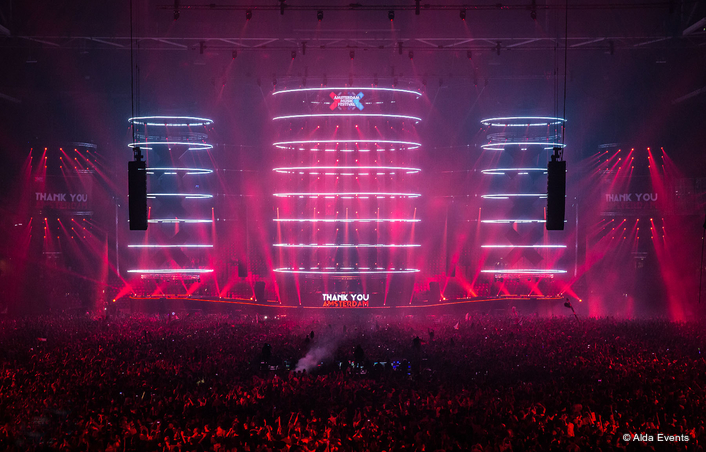 They took their portable WYSIWYG setup to the Arena which enabled André to check that everything was as he was expecting during the load in, and this was also made available to all the guest LDs so they could maximise their time and make the most of the available rig.

Several artists also brought their own LDs and The Art of Light looked after their own acts on the line-up which included Armin van Buuren, Hardwell and Afrojack.