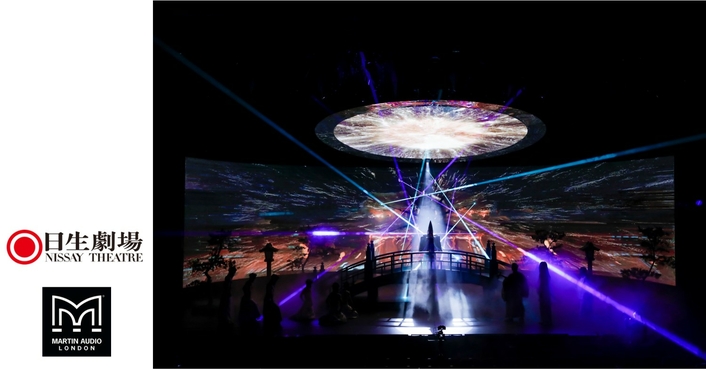 The theatre production of INSPIRE Onmyoji, starring famous Japanese actor Takao Osawa, ran at the 1300-capacity Nissei Theatre in Tokyo from December 31st 2020 to January 6th 2021. This number was reduced slightly to conform to the Government’s COVID regulations at that time.

Show producer, Junya Yamada, had wanted to create unprecedented special effects with the sound system for this unique work, and so he contacted Iwao Tsurusawa, president of MSI JAPAN Tokyo, Martin Audio’s rental partner. He explained that he wished to create a live show using the Sound Adventures 3D sound system he had experienced previously, and Mr. Tsurusawa’s response could not have been more positive.

The main PA system comprised a pair of ground stacked line array enclosures (eight WPM arrays and two SX118 subs per side) and five stage front fills (all WPM). In addition, seven XD12 were pole mounted in front of the audience area. 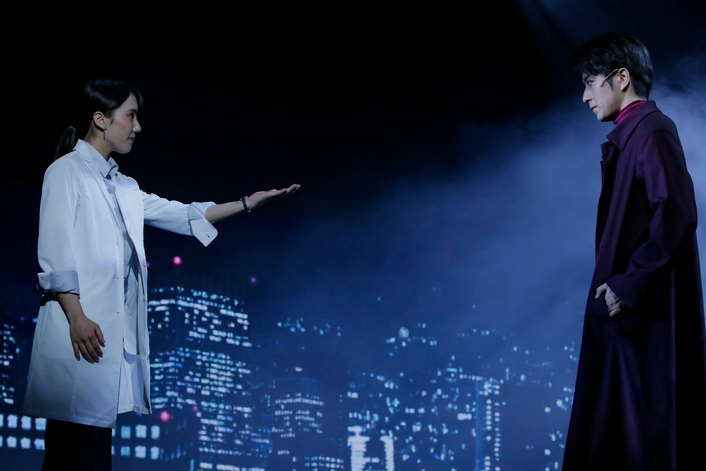 The theatre’s installed proscenium L/C/R, along with wall speakers on the upper floor and second floor, those aimed at balcony seats, and a temporary Martin Audio ADORN A55 were set up in the back row of the second tier with a mic stand. In total, 31 outputs were controlled by a SARA II processor, the heartbeat of the Sound Adventures system. 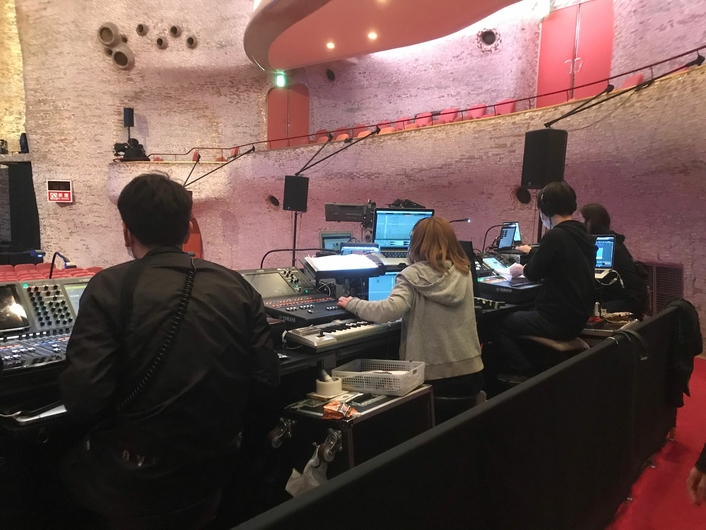 Martin Audio iK42 amplifiers were deployed to the WPM and XD12, and Lake LM44 processors were assigned to virtually all systems, to control both temporary equipment and permanently installed equipment—on the one interface —all connected by a Dante Digital Audio Network. Including the recording lines and backup Pro Tools, the number of Dante patch points exceeded 200.

SARA II supports an external control protocol called Open Sound Control (OSC). Thanks to the technical ability of Audiobrains, the MSI Japan subsidiary, everything was integrated in smart control. They provided the immersive sound engineer, while further engineers were stationed at three separate Yamaha mixing consoles: one for the mics, one for music only, and the last for sound effects. Sitting above that was a separate ‘immersive’ sound engineer.

The playback application was Ableton Live; when the operator hit playback, this automatically released the unique MIDI Machine Control (MMC) protocol, while another special application converted it into OSC signal, enabling it to control SARA II. With this configuration, sound effects could be placed and located everywhere simultaneously and streamed binaurally for the Internet live viewings broadcast on December 31st and January 3rd. Control of the SARA II and KLANG:fabric processors were achieved via a single MMC and OSC simultaneously. 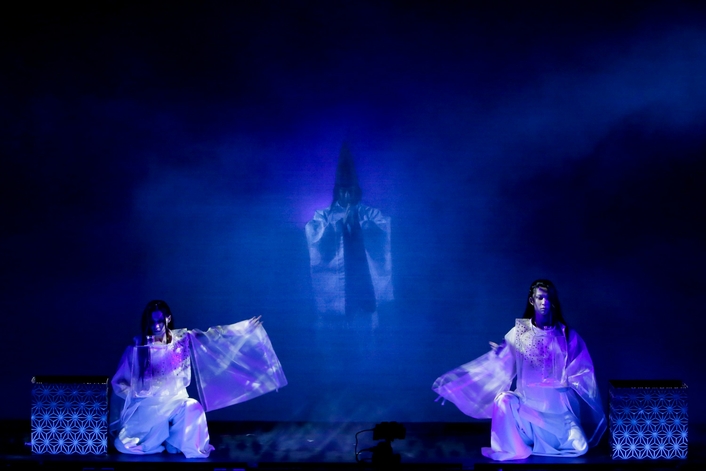 Audiobrains director Sam Yamashita, who was at the heart of the sophisticated sound design, explained how it worked. “All three consoles released MMC when engineers hit the snapshot change; those signals were then fed to an external MacBook Pro, from where they were converted into OSC in order to control the SARA II and KLANG, using a special application. 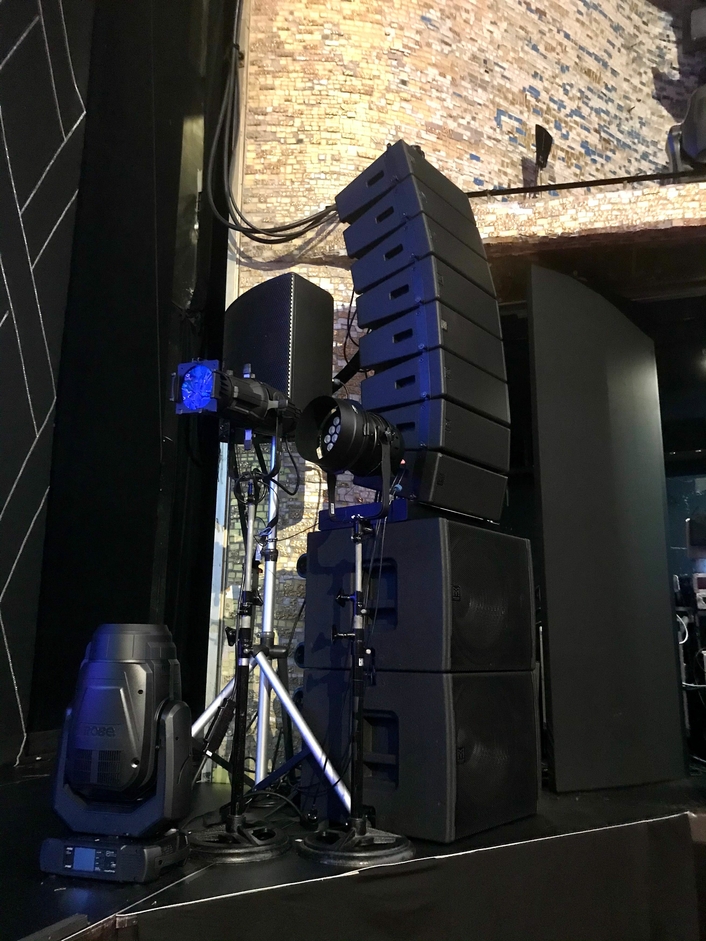 “With so much going on, you can see why we needed a separate ‘immersive’ engineer,” he added. “In fact I believe this will be essential for the next generation of shows.”

So much for the audio. Audiences were also able to see numerous special effects including the scenery of the huge LED screen, which is rarely seen in traditional Nissei theatre, and the movable circular LED screen suspended above the stage moves up and down along with each scene of the play. In addition, a new type of fibre beam (harmless to the eyes) was fired into the audience area, adding further excitement to the production. 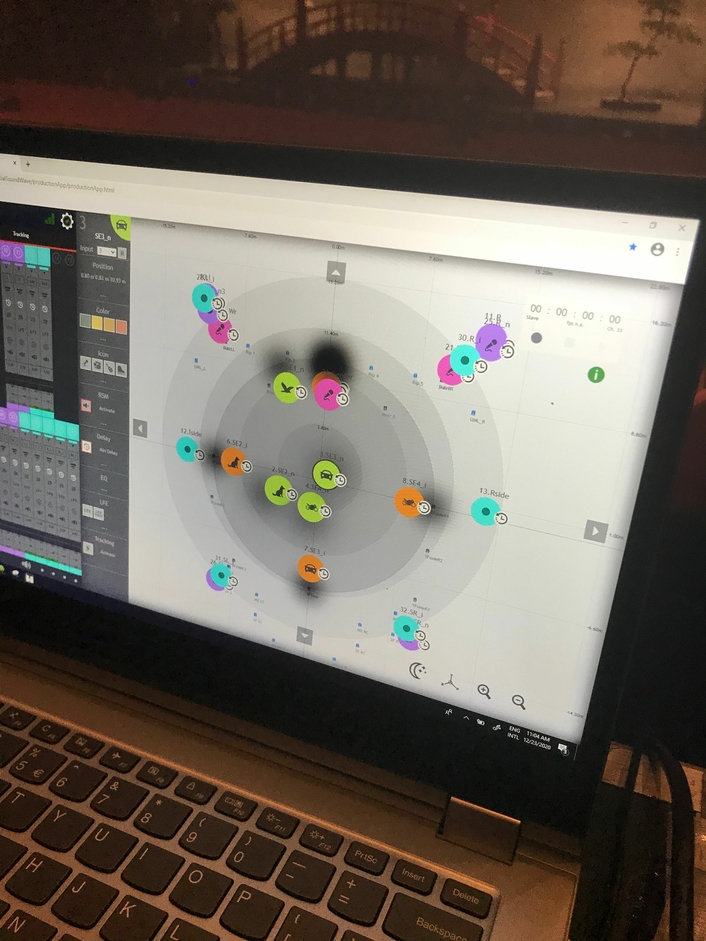 Reflecting on the event, Iwao Tsurusawa, stated, "When sound becomes 3D it means nothing unless all elements are linked: artist, direction, stage, lighting, video and live environment. Thanks to cooperation with each department, and a loudspeaker design that covered the entire audience seating, we were able to create a unique atmosphere for INSPIRE Onmyoji using the latest sound technology. I am happy that we were able to provide inspiration and create an immersive feeling for the [online] audience just as if they were present."