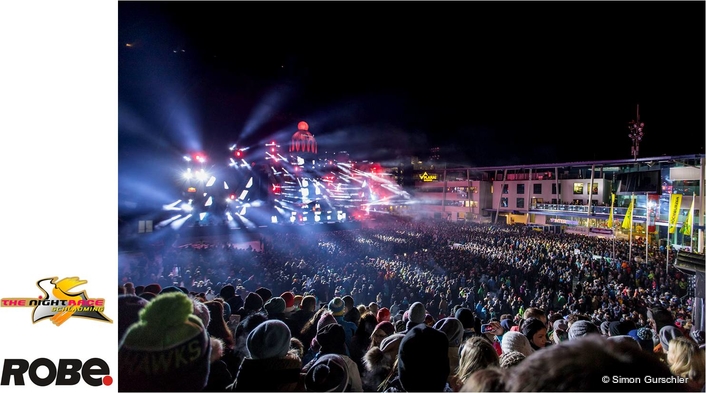 The former mining district of Schladming-Dachstein is considered one of the finest skiing areas in Austria during their season. It is also famous for the Men's World Cup Night Slalom – hailed by some as the biggest party in the Alps – attracting up to 50,000 spectators and skiing enthusiasts annually towards the end of January.

The pressure was therefore on for lighting designer Daniel Reistenhofer from D-TWO Stage&Light Creations who was asked for the first time to light the 2017 season opening event.
To help make the biggest impact possible with his bold and vibrant lighting scheme he enlisted the help of over 100 Robe moving lights – 74 x Pointes and 34 x BMFL WashBeams! 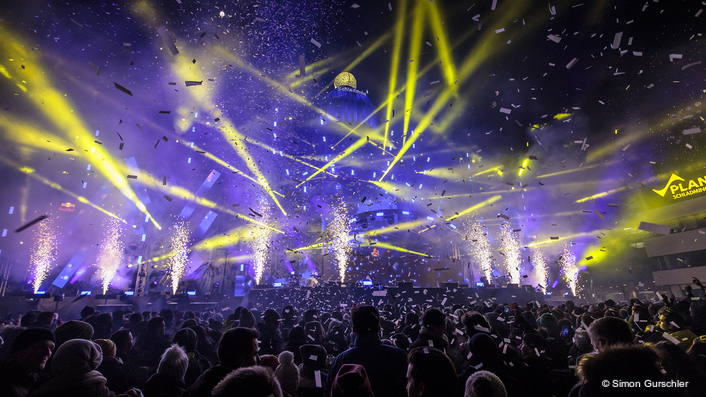 Daniel was asked to light the ski opening after the organisers, Leutgeb Entertainment Group and the Planai Hochwurzen Bahnen Gesellschafft, saw some of his other stage designs. They  wanted something totally different to what had been done before.

The format was similar to a large EDM event, a large stage – 40 x 24 metres - was set up next to the Planai ski slope - normally the finish line for the Night Race - and around 16000 people packed in to enjoy the start of December opening event and the stonking international line-up that included Martin Garrix, Alle Farben and Alan Walker rocking the slopes!.

Daniel was asked to design set, video and lighting, which was a massive bonus … so he proposed a design based on four hills representing the contours of the Planai mountain cableway, with the big one in the middle being the Dachstein. This was topped, jauntily, by a large scenic bobble hat! 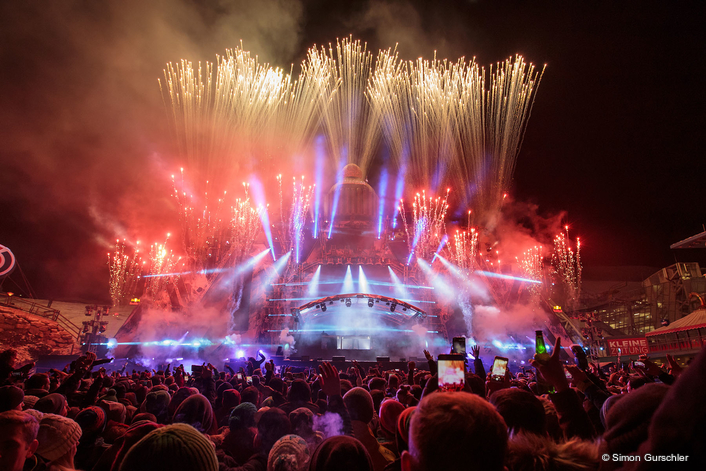 Lighting wise he wanted to give as much scope and flexibility as possible to the guest LDs arriving with each of the headlining DJs, so with limited programming time, they had the chance to make up great looking scenes quickly and easily.
The Pointes and BMFLs were rigged on six tall towers upstage and a steel structure used for rigging the LED video screens and the set. This was designed to be open with a low see-through arched roof immediately above the DJ booth to provide some protection for the artists in case of snowfall. 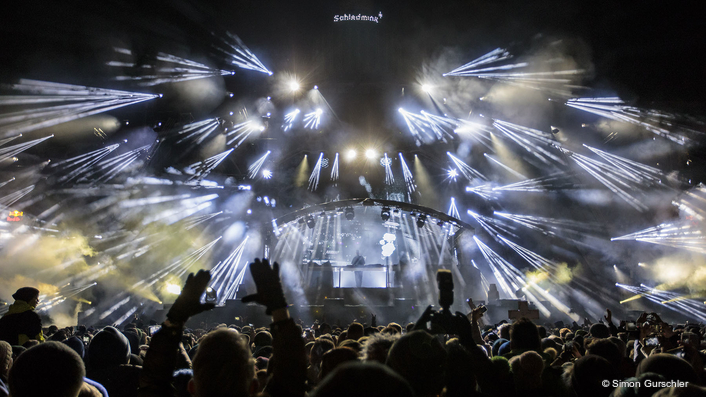 The Pointes were the main stage-lighting workhorse fixtures and were positioned all over the structure, from where they could light the stage, the DJs and fire out into the crowds.

The BMFL WashBeams were onstage and rigged to the FOH towers. Two at FOH and four onstage were used to light the décor and the hills. Daniel made the most of the shutter systems to clearly define and highlight these set pieces, including the bobble hat which could be clearly illuminated from 60 metres away by these FOH BMFLs!

Another four at FOH were utilized to light the front line of the stage; eight upstage provided powerful piercing beams from the back, with the remaining fourteen dotted over the stage deck for additional show and cross lighting.

Daniel uses Robe regularly in his work – in fact it is a long history that started with the original DJ Scan 150s and ColorSpot 250 XT series’ around 15 years ago! However he wasn’t putting himself first in the specification for the season opener, he knew, having studied all the various artist specs, riders and requirements, that with Robe in the house … all the LDs would be happy. 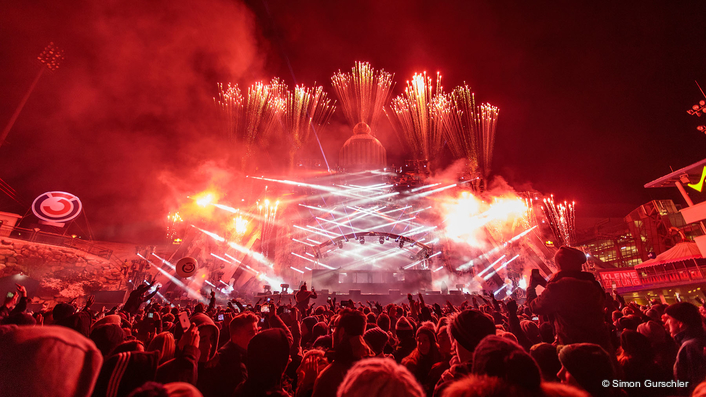 Apart from that, the light weight of the Pointes meant he could safely have more lighting rigged on the steelwork over the stage, and he needed multiple fixtures to create those famously BIG, wide, all-encompassing looks throwing right to the back of the audience that work so brilliantly for EDM music.

With temperatures dipping down to minus 15 at times … he also needed fixtures that he knew would work in these extreme conditions, so that was another reason for specifying Robe.

“I think we used every function of the Pointe in spot and beam mode because you can generate sooooo many different looks and possibilities and this little fixture has SO much output”.

The BMFLs were used for serious gobo projections, and with the WashBeams at FOH the framing combined with the gobo projection and animation capabilities could highlight and texture the whole stage. They could light from low down at the back with the smallest beams and create a range of powerful multi-beam looks that contrasted with those being created above by the Pointes.

The  video elements of the show was designed by Daniel and operated by a VJ hired for the event, with the intensity and colour of the video playback also controlled by Daniel and second operator Thomas Stranzl on their Hog4 and Full Boar 4 control consoles. This way they could match the lighting and video more closely and produce fully harmonious looks. In addition to these consoles and a Road Hog 4, a grandMA was provided for guest LDs.

The finale and ‘closing show’ of the evening was run via timecode triggered by the lighting consoles.

The biggest challenges – as is often the case with a multi-artist event – was to ensure the overall client and all the featured lighting designers were happy … a task that entails pleasing a lot of people. There was the added hype of delivering something that would also really help elevate and promote the Schladming-Dachstein ski region.

Lighting equipment was supplied by Getec-Eventechnik-GmbH. The production manager was Strohmayer Andreas and the lighting crew chiefs were Karl Sorger and Michael Kink. Technical Production was co-ordinated by Daniel Zötsch and SFX were supplied by FOG fireworks + sfx GmbH and run by Sascha Tietze.