Lighting the Louvre for David Guetta 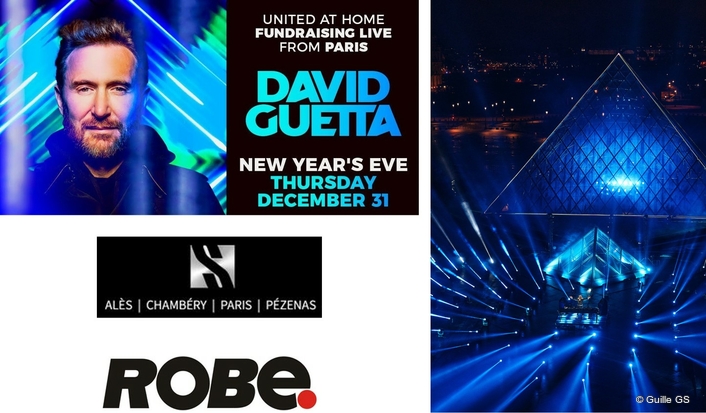 It was the gig of show designer / director Romain Pissenem’s dreams!

Global music superstar David Guetta, France’s most iconic DJ and music producer playing a unique set live at one of the world’s most visually, architecturally, and historically impressive site-specific locations, Musee du Louvre in central Paris … Celebrating the monumentally symbolic roll-over from 2020 to 2021 in this breath-taking environment with style, cool, poise and some superlative dance beats, 116 x Robe iPointe moving lights on the rig helped make it THE New Year’s Eve livestream to remember from the year THAT WAS.

It was also the third in David Guetta’s “United at Home” concert series to raise money for those in need in what’s been a universally tough year for everyone.

Romain and his UK and France based creative production company High Scream were also the stream’s executive producers, working directly for the artist and collaborating closely with staff from The Louvre. The 15-camera stream was directed by Job Robbers. 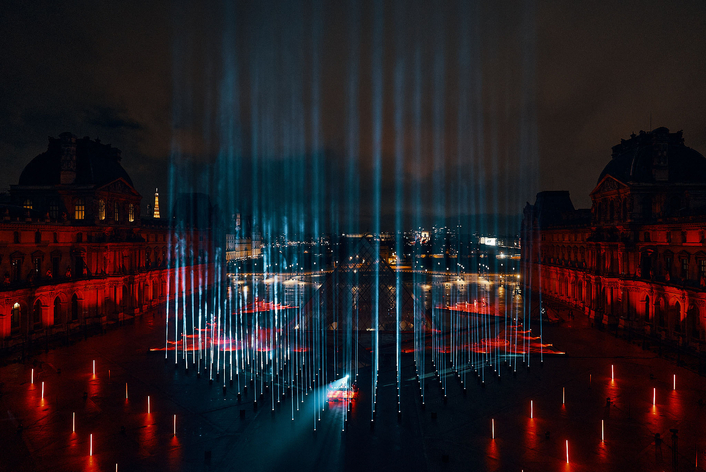 His starting point for the production design was the beautiful 21.6-metre-high glass and metal pyramid structure designed by architect I M Pei with its 603 rhombus shapes and 70 regular glass triangle segments, a timeless contemporary masterpiece that defines the Louvre’s main courtyard.

While Romain and High Scream have been producing David Guetta’s live shows for the last couple of years, working on a show of this stature and significance took everyone to new levels of show production.

For Romain, a truly international citizen, this show was also an emotional snapshot for an incredibly proud Frenchman. 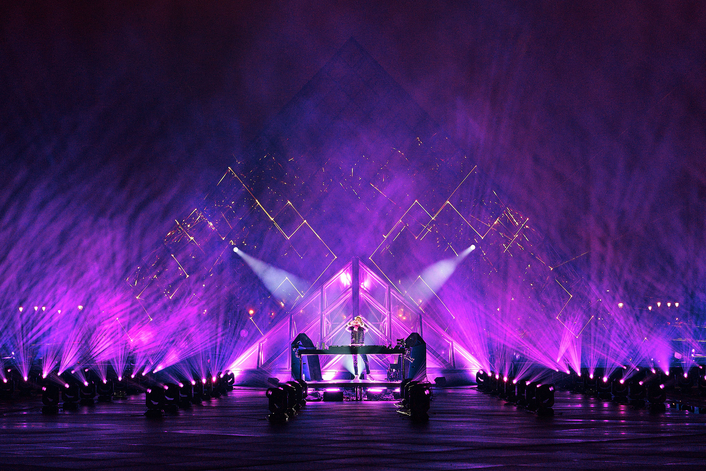 “The biggest challenge was to respect the wonderful aesthetics and integrity of this very special space and add in a complex, high-impact, show-stopping electronic music show capturing the sheer magic of this incredible moment,” commented Romain.

The pressure was on for everyone involved to impress an audience of approximately 16 million who joined the stream from literally every corner of the globe!

Throughout 2020, High Scream has designed and produced a steady trickle of broadcast and streaming projects, all of which have enabled Romain to get savvy about how to bring the visual atmospherics and excitement that are a given with live audiences – to screens large and small anything from a smartphone to a massive LED wall – providing a cascade of goosebump moments for viewers. 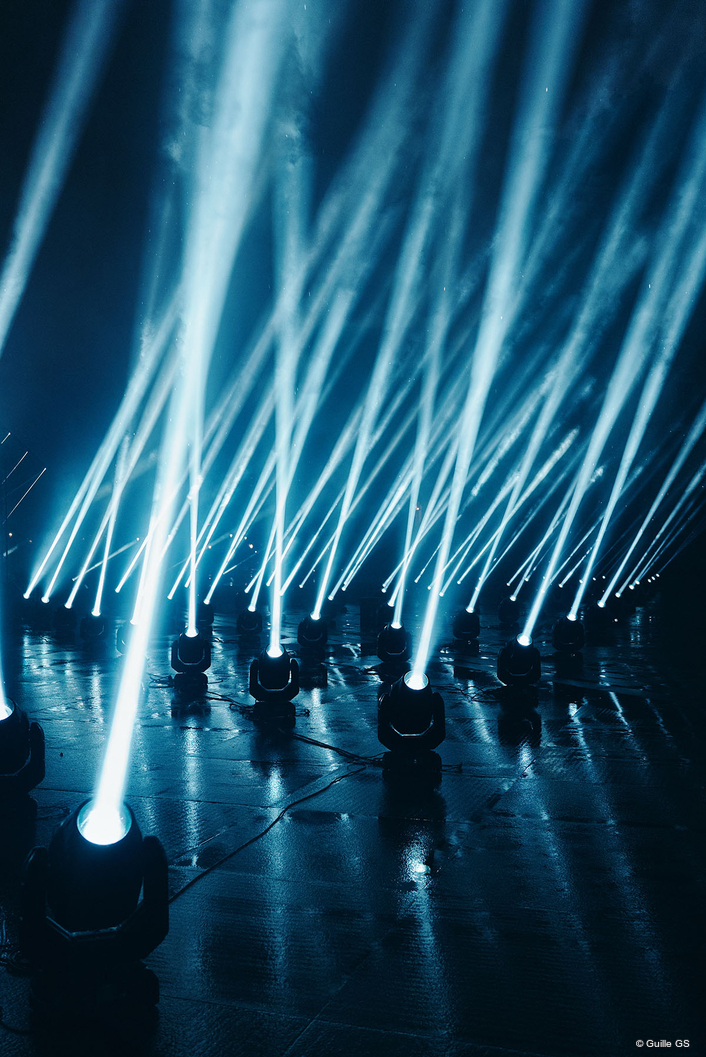 After much consideration, Romain decided they would hit the right vibe with lighting and lasers as the media to create layers of optical excitement, however they also supplied camera director Job with a collection of custom playback video content to pepper his mix as needed!

With Guetta’s DJ decks positioned centrally at the base of the main pyramid – a 34-metre-wide expanse – it was clear from the outset that the aesthetics precluded having any trussing or metal structures in view, so all lighting was positioned in a matrix arrangement on the floor radiating outwards from the decks.

The 116 x iPointes were the primary lights of the show. 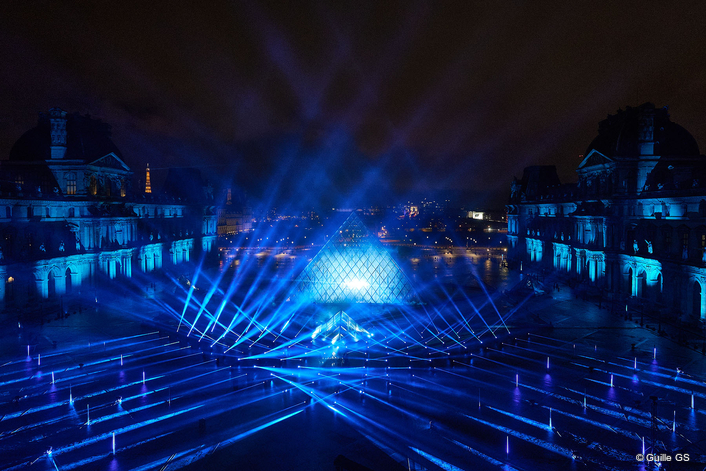 They looked stunning as their intense beams sliced dramatically through the rain and night sky radiating the incredible energy and sounds being created by the artist.

iPointes were chosen for their brightness, features and durability. For the geometry and style of the production design to work, protective domes were out, so they needed to be robust water-resistant fixtures as no one had any illusions about the Parisian weather in December!

Sure enough … apart from a brief pause for around 10 minutes at the start of Guetta’s set, it rained persistently all evening, turning to sleet and ice-rain towards the end of his incendiary hour-long performance … which was brutally cold but ensured the light beams looked even more awesome!

The iPointes were arranged in a series of carefully crafted linear lines creating a triangle shape mirroring the elevation and angles of the main pyramid. Effectively an ocean of lights in front of the DJ booth, which evoked the dynamic look that was fundamental to the design working from all the camera angles and was especially cool on the drone shots!

The courtyard also has two smaller glass pyramids and seven triangular-shaped water features flanking the main pyramid … all providing additional surfaces to reflect and refract light, together with the rain that further amped up the overall moodiness with additional atmospheric twists.

Four hundred and thirty-two lights were utilised in total.

To these Romain added some subtle lasering on the pyramid itself, with 20 x 30-Watt lasers shooting up and across the structure producing subtle highlights, disturbance and glitch effects which looked great on camera.

Lighting and audio equipment were supplied by S Group, a regular High Scream show and event technical partner, with the lasers from Laser Fabrik. 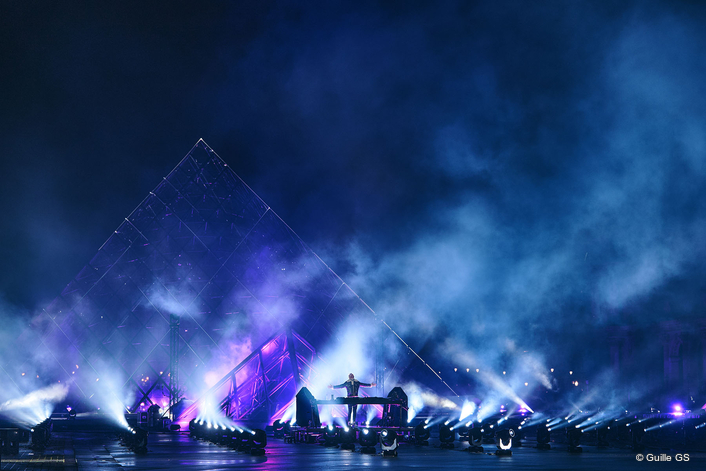 Romain, who has worked on many incredible shows worldwide, commented, “This was just REALLY special, particularly after a year like 2020 … it was something else. We were all very honoured to be involved and for David (Guetta) to entrust his production to us. The show brought an important message of hope during this very challenging time, and we were all grateful and immensely proud to be part of it.”

Having already raised over $1.5 million for charities with the United At Home events from Miami and New York, United At Home Paris was dedicated to UNICEF and Les Restos du Coeur. Donations could also be made to the Louvre, which has been closed for many months due to the pandemic.