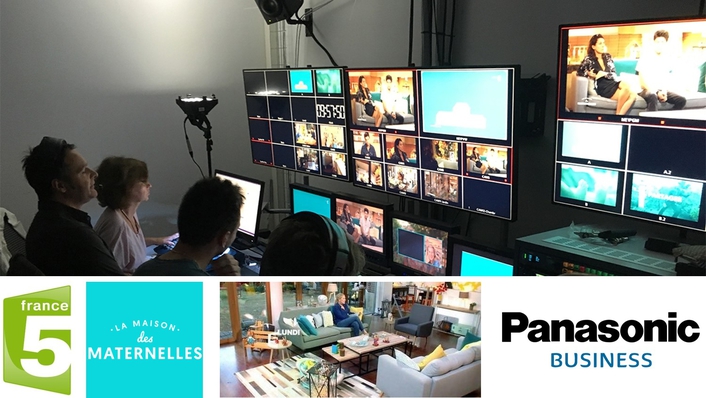 The television industry is having to constantly reinvent itself. Competition from and complementarity with the Internet means that it needs to rethink production methods, become more interactive, be reactive and take the plunge and do more live shows. Les Maternelles (Mothers-To-Be), a programme that has been aired on the channel France 5 for 15 years now, had a makeover this year – it's now called La Maison des Maternelles (At Home With Mothers-To-Be) and has adopted the very approach just mentioned by overcoming the challenges inherent in hosting a daily morning live show. The company Visual Compact designed and installed an original and flexible technical system on behalf of the production company 2P2L.

For this new season, La Maison des Maternelles has struck gold with its new format of filming in a "real" house that has been transformed into a TV studio. It's like a cosy nest that allows what the show is all about to take centre stage: new and expectant mothers and their babies and toddlers. The show's audience consists of soon-to-be mums on maternity leave and new parents and La Maison des Maternelles is dedicated purely to them.

The production company 2P2L, which is no stranger to accepting challenges and inventing technologically innovative solutions, entrusted the design and installation of the technical aspects of this new project to Visual Impact. In the end, they came up with an original system and a broadcasting solution in record time, as Julien Dulaurent, Sales Engineer at Visual Impact, reveals: "The production company contacted us over the summer, around mid-July. Based on the brief, which was to kit out a house and turn it into a TV broadcasting studio, we drew up our proposal in two weeks and put the equipment in place, did the cabling and trained everybody up in four weeks. This was a super-fast turnaround, bearing in mind that we had to juggle equipment availability with the manufacturers. In order to ensure that operational procedures were manageable and ensure that were came in on budget, we suggested using PTZ cameras as much as possible which are more and more commonplace now on film sets."

The technical system comprises around 20 cameras, 15 of which are Panasonic HE130 PTZ cameras and 4 of which are Panasonic AJ-PX380 shoulder-mount camcorders. The shoulder-mount camcorders have a 1/3-inch sensor - the same sensor as the PTZ cameras, and are fitted as standard with an E/S SDI connection which, via a CCU, enables the vision engineer to have all the camcorder's controls at their fingertips. The cameras and camcorders are distributed around the house's four sets and are routed via the matrix towards the Panasonic HS6000 switcher. The PTZ cameras are controlled by two operators, and a vision engineer ensures consistency, in terms of colorimetrics and exposure, across all the cameras installed on set. The production team consists of 12 technicians in total.

Over the four-week period, the Visual Impact teams installed all the network infrastructure (video, audio and HF). It was no mean feat seeing as the set designers still hadn't even finished decorating the house. During each programme, the host, Agathe Lecaron, moves from room to room in the house with her guests. She opens the show in the kitchen with a news piece from journalist Benjamin Muller, then moves through to the living room for the chat section before going to the bedroom and the bathroom upstairs, which serve as secondary sets, to cover certain practical issues in the form of tutorials.

A hive of interactivity
The production control room is located in the garage and the broadcasting control room in the cellar, therefore there not a single square metre of the house is wasted.

The show is designed to be highly interactive. Every day, external guests are brought in to provide mothers with advice and tips, and lots of reports are done live on air. "We have installed technical equipment which isn't very commonplace in the television industry and use Skype TX for external links, as well as LiveU in order to be able to speak live with maternity wards every day", Julien continues. LiveU is used when there is a network to provide a superior image quality to Skype TX.

This original technical system creates a real link between the show and the audience at home. During the show, the presenters also pick up on information coming in via social networks, with comments and questions getting answers and responses live on air from the experts. The broadcast graphics are done on Chyron Graffiti, which is interconnected with France Télévisions' Social Media Management system developed by Novius.

This re-energised live show seems to be resonating with the audience at home as viewing figures have continued to rise amongst the female target groups since the first show back in September.