In taking the Santa Fe Opera production of Madame Butterfly, which he first lit in 2010, to the much larger, 3000-plus capacity Dorothy Chandler Pavilion at LA Opera, he found a dynamic role for GLP’s versatile impression X4 Bar 20, from GLP’s range of battens. 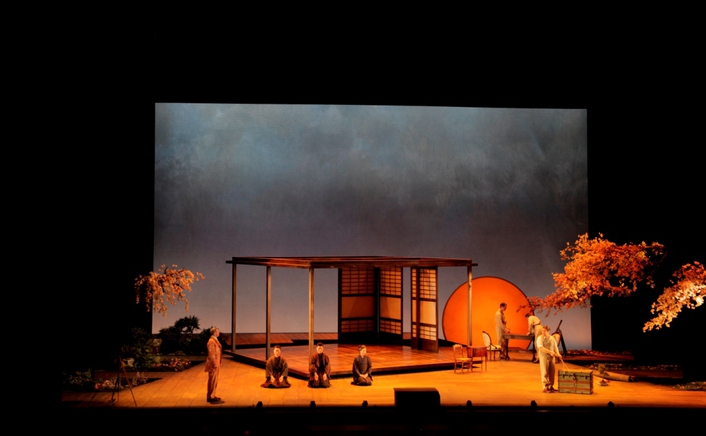 “There were challenges in relocating this production from the relatively small stage in Santa Fe that is also open to the elements upstage,” he explains. “The night sky is their back drop and that gives a depth that completes the stage picture and in many ways allows for a simpler stage design than you might choose for a traditional venue.” 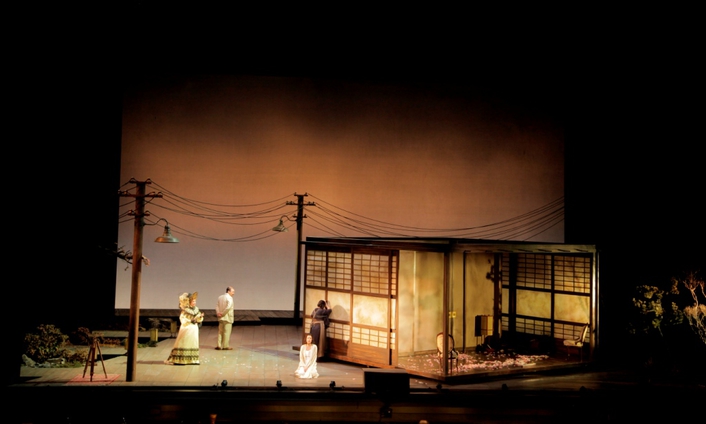 To make this work in the Dorothy Chandler Pavilion an impressionistically painted scrim and rear projection screen were added by the designer. “We chose not to use ‘sky’ projections, which would have been too ‘real’, but instead rely on a more theatrical effect of light and color to add the depth of field that we had in Santa Fe,” the designer continued. “This is where the X4 Bars came in and gave us flexibility far in excess of the four-cell floods that form part of the Opera’s standard rig.”

The X4 Bar 20 uses 20 high output RGBW LED’s, tightly packed in the 40-inch long batten. It is characterised by high quality optics to ensure smooth, homogenized output through a broad pallet of pastel and saturated colors, a 7:1 zoom range from 7° to 50°, a motorized tilt, for fast refocusing and DMX control to offer full pixel mapping capabilities.

The production also marked Rick Fisher’s baptism into GLP technology. “I have admired them at trade shows, but when I saw a demo of the X4 Bar I was very impressed.” He was introduced at the White Light New Technology showcase, organized by the ALD at the Royal Central School of Speech and Drama in London.  “This is a great way to see fixtures in a more theatrical setting instead of a noisy day-lit trade show floor. Watching the equipment in this environment they far surpassed expectations and made these units really stick in my mind.”

All designers that come through the Dorothy Chandler can select fixtures from the theater’s inventory and additional equipment will be rented in to accommodate the production. They are set up to interface with any incoming production requirement. But in this instance Rick Fisher chose to deploy GLP’s new generation technology in addition to the house floods. “With a huge scrim and [70ft wide] RP screen to light I sensed this new component would benefit from more color choices and flexibility.”

The 24 fixtures light the entire cyc and are set approximately 1m upstage of the rear production screen to add to the horizon lighting.

Rick Fisher couldn't have been more positive. “These produce even seamless color without the usual scoops and scallops that you can get when you try to get too many color options in your ground row!

“There are a couple of ‘unreal’ moments in the piece where we wanted to make a statement and having infinite color choice from the X4 Bars made this possible.  At one point the director said the back-cloth looked like a Rothko painting.  That is high praise indeed and the X4 Bars were an essential part of this.”

“The color was intense and we could do subtle shifts and were able to throw in a few dramatic accents when required; I could not have justified this with only four colors to mix with in the conventional house floods. Also, the required sunset and dawn were much more seamless and beautiful due to these units.”

The fact that GLP was based in LA provided further reassurance. “I want to thank them for their incredible support — I know the Bars have really impressed LA Opera as well.”

LA Opera’s technical director, Jeff Kleeman agreed. “In the case of Butterfly, Rick needed to create a complex skyscape at the back to replace the desert sky view of the Santa Fe Opera house. The best way to get the beam angles and color flexibility desired was to use these X4 battens.

“We have not previously used any of this equipment. The LA Opera was very pleased with the ease of use, consistency and resultant effect of the X4 Bars. In fact we are currently considering a large fleet of them for a future production.”

As usual, a highly trained in-house team of programmers, moving light and service technicians were on hand to support the production. One of these was Head Electrician Steve Williams, who stated, “This the first time we have used these fixtures at LA Opera. I am very pleased with the units so far and would certainly use them again.”

Operation of the Bars was simple plug and play, with Rick Fisher adding: “I love the way they are designed to fit snuggly up to each other — but I would also like to use them as footlights on other operas.  Their low profile and neat look make them perfect for this, and the zoom capability would be great for some of the larger stages that opera plays.”

Now that he has been ‘inducted’ Rick says he is really looking forward to putting the X4 Bar 20 through its paces in the future, particularly the zoom and general movement — “and to explore the full dynamic range that these Bars can provide.”

Fourleaf Takes Over GLP Distribution in Japan
GLP Out in Force at Clockenflap
GLP impressions Boost Giant Matrix for 15,000 YouTubers