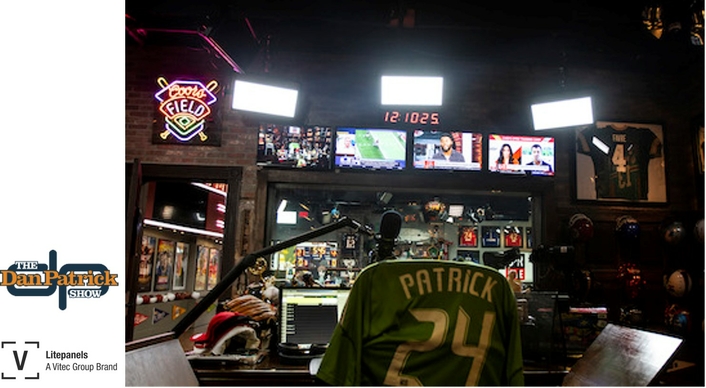 Litepanels' Gemini and Astra LEDs illuminate the new 20,000-square-foot production facility that is home to the popular "Dan Patrick Show."

Based in Milford, Connecticut, the daily "Dan Patrick Show" broadcast showcases many of the biggest stars in sports and entertainment. The show is syndicated by Premiere Radio Networks and televised on DirecTV's Audience channel, three AT&T SportsNet affiliates, and Bleacher Report (B/R) Live, and it can also be heard on SiriusXM Radio channel 211 (Dan Patrick Radio). The show's vast new facility includes two 2,800-square-foot studios and a 4,500-square-foot Fieldhouse. This "man cave" is complete with a miniature AstroTurf football field and a basketball half-court for the on-air personalities and guests to practice their moves.

With so much territory to light, the "Dan Patrick Show" crew decided to migrate the production to all-LED lighting. After evaluating the market's range of LED soft panels, the production team chose the Litepanels Gemini and Astra panels for their reliability, light weight, and ease-of-rigging. Other big selling points for the Gemini Soft LED panels were their extremely high-quality full-spectrum white light, RGBWW color versatility, and integrated power supply and ballast.

"Since we had only 11 weeks to go from initial construction to on-air, time was of the essence. The Geminis and Astras are incredibly quick and easy to install and mount, which made a big difference in our tight schedule," said Eric Jones, associate director – creative operations, AT&T Mobility & Entertainment Group. "Gemini was an especially easy choice compared to the closest competing light on the market, which is much heavier and has an external ballast. The Gemini's built-in power supply makes it a much more compact unit and means no extra cables, so rigging lights becomes quick and easy. Plus, we love its plug-and-play DMX control, precision plus/minus green adjustment, and the ability to do gradual RGBWW color changes."

The majority of the 15-camera "Dan Patrick Show" is a sit-down studio production, with a combination of permanently mounted Gemini and Astra panels providing keys, fills, and backlights for the main talent positions. "We rely on Gemini's flexible color temperature adjustment to create a particular aesthetic in the studio; for instance, we can warm up the color temp of the walls to match the overall lighting of the room," Jones said. "The ability to change the color of all of the keys from a single lighting console is a huge plus."

In addition, the show's hosts often roam around the "man cave" space to conduct additional interviews and activities for the TV production. The plus/minus green control on the Geminis makes them particularly useful in such ENG-style situations, enabling the crew to match lighting from existing fluorescents and other permanent fixtures. On certain occasions, such as a performance by a guest band, the crew employs the Gemini panels' dial-up color options and special effects modes to create color backlights and other unique effects without having to add gels.

"The versatility of the Geminis is their biggest asset," Jones said. "The ability to hang the light up on a grid one day, and then take it down the next day, throw a battery on it and walk around with it for an ENG shoot, is something you simply don't find with any other light in the industry."

A Snapshot of Litepanels
Litepanels, a Vitec Group brand, was founded in 2001 by five professional gaffers and engineers who saw the future and pioneered LED lighting for motion pictures, television, and the audio-visual industry. Their Emmy® award-winning technology has now been used on thousands of productions worldwide and is trusted by the world's leading broadcast organizations. Litepanels continues to expand its suite of flicker-free, color-accurate, fully dimmable soft lights that talent and lighting directors admire. These environmentally friendly panels can pay for themselves with power savings and long life, setting a new standard in professional lighting.