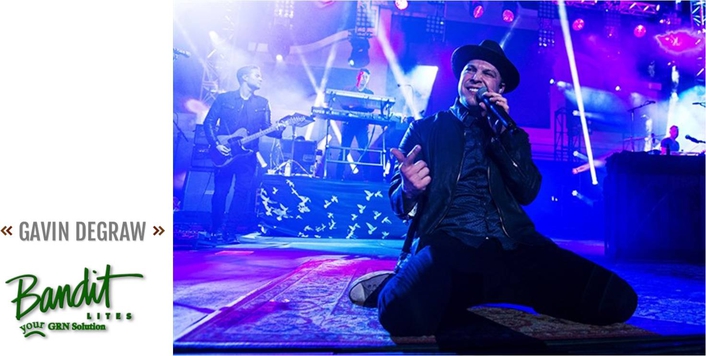 Critically acclaimed singer-songwriter Gavin DeGraw recently wrapped a tour with a lighting package provided by Bandit Lites. The Grammy nominated artist traveled across the country on a three month, 50+ show excursion that showcased both his popular hits and newest album, Something Worth Saving. Lighting designer Mat Gass built a look at saved on space put still offered a great output with a functional floor package.

“Bandit had everything I was looking for,” he said, “There was no subs, no trying to steer me to another fixture and everything was packaged with space in mind.
Bandit’s exclusive GRNLite Bars illuminated an Austrian style back drop with crinkle taffeta in silver grey, while six Bandit GoGo truss towers adorned with GLP X4S units and a CuePix WW2 LED blinder lined the stage. Robe Pointes were placed between the rolling base plates and around the drum and key risers, while Robe 600 Wash unit were both down stage left and down stage right. 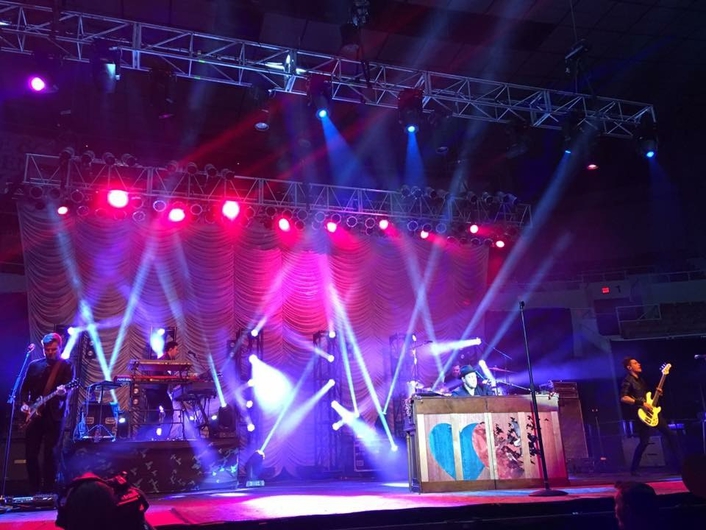 Gass’s design process entailed creating a design that could get on and off the stage efficiently (including venues with no ramps, docks or forklifts), balancing truck space with a co-headlining tour, ensuring the lighting would be consistent no matter the venue size and compliment the diverse set list.
“For this show we take a moment and slow things down and the band comes downstage for three acoustic songs, so we needed to be able to make a change to bring focus down stage, and then return to a rock show,” said Gass.

The look of the lighting for this tour was left to Gass’s discretion, a fact he contributes to his good relationship with the band saying, “Having worked with the artist since 2014, I have a firm grasp of what they like. It helps knowing who is going to tolerate having bright things pointed at their face and who won’t.”
Gass shared he knew he was in good hands from his first interaction with Bandit’s Brent Barrett, a feeling that was reinforced by his treatment from Project Manager Matt King who he says, “Did everything to make my life easier.”

“Watching this production come together was such a privilege and we at Bandit are so proud that we were able to provide a level of service that Mat and the entire Gavin DeGraw team deserve,” said Brent Barrett. “This tour was a testament of how proficiency, creativity and talent can unite into one remarkable show.”
Both lighting tech Chase Bosworth, who came out on the tour initially, and John Lucksinger provided excellent service and a seamless transition. 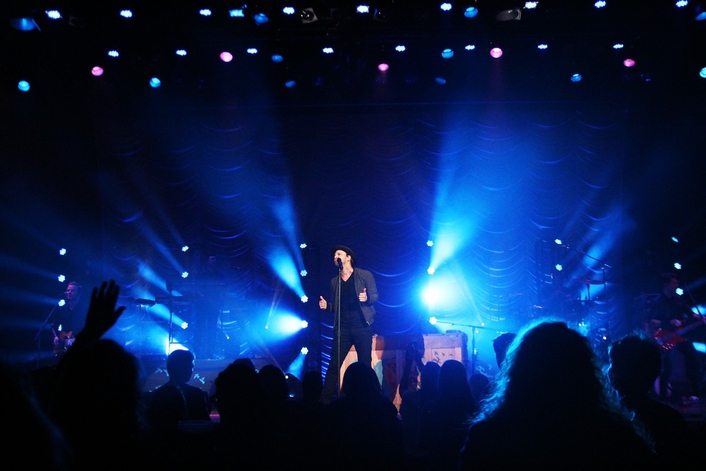 “Having a veteran like John is what made this possible, as he sees problems often before I do,” said Gass. “He made a great part of the team. John was a great asset from the first day he showed up, and as we got to the end, I can say he kept things rolling every day and went above and beyond to make this tour happen. Everybody has gear, but people are where the value of a vendor is for me and Bandit has great people.”