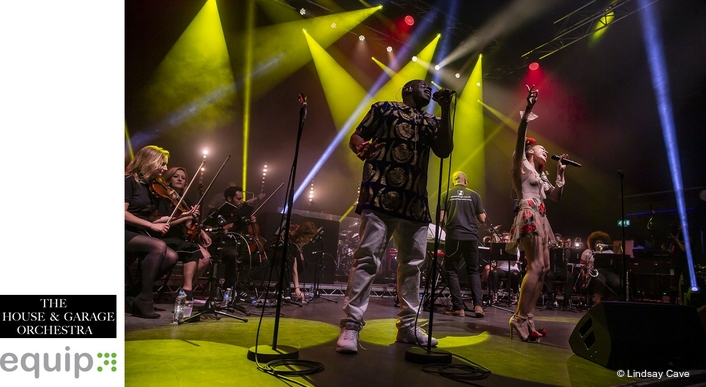 Technical production specialist equip event services co-ordinated all the technical elements – lighting, audio and staging – for The House & Garage Orchestra’s (THGO) recent sold out gig at Shepherd’s Bush Empire, their largest London show to date which sold out within days of being announced.

The ensemble, founded in 2015, has ignited an appetite for their energetic reimagining of some of the UK’s biggest house and garage hits. Their set is a rich multi-layered journey and orchestral take on the infectious and iconic dance beats of the 1980s and 1990s - what started as the underground rave and Garage scene - presented as a breathtakingly rhythmic and rich new live show. 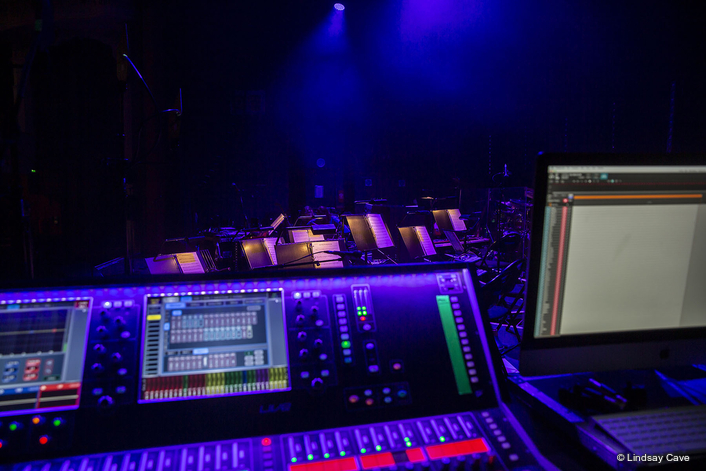 When production manager Kevin Jianoran joined in November 2018, they were an 8-piece with guest vocalists and just him on the crew as the touring sound engineer. Since then it’s quickly upscaled to become a 20-piece orchestra, complete with brass and string sections, 14 guest vocalists and a technical crew of eight!

equip event services Ltd
equip, based in Brixton, London, were approached by Kevin, who is also the band’s monitor engineer, to work on their tour last November, which was a big success. He then returned to James Cooper and the equip team and asked if they could work on the high-profile Shepherd’s Bush gig, plus their upcoming tour.

“Everyone at equip has always been very accommodating and friendly. Nothing is ever a problem, they come up with smart and imaginative solutions and work sensibly within designated budgets and other parameters” he commented. 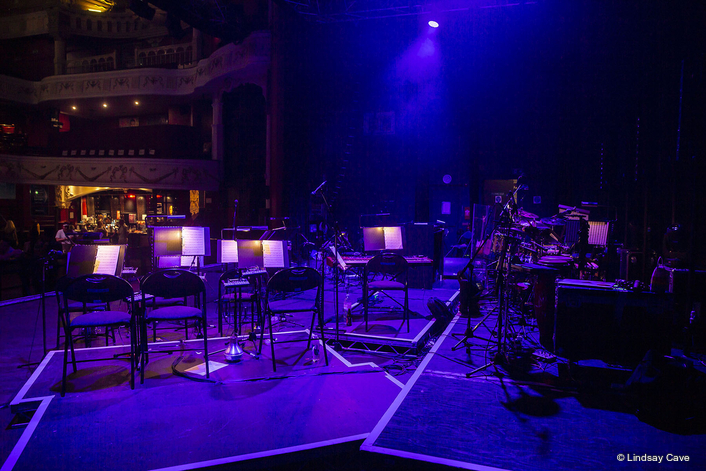 He also specifically wanted a single production supplier able to deal efficiently with all the technical elements and co-ordination, and being local to the London venue was considered a bonus.

Dan Barley, equip MD, states: “We were all super-excited to be working with Kevin and THGO band again.  Shepherd’s Bush was a high pressure one off with great public interest and many expectations, with a few technical and logistical challenges which we ensured went smoothly. Apart from that, we all love the music. Most of us have partied to these fabulous sounds at some point!”

equip’s production and project manager for the event was James Cooper. He received their rider and set about scheduling the kit required, which included two Allen and Heath dLive S7000 consoles for the FOH and monitor control package. 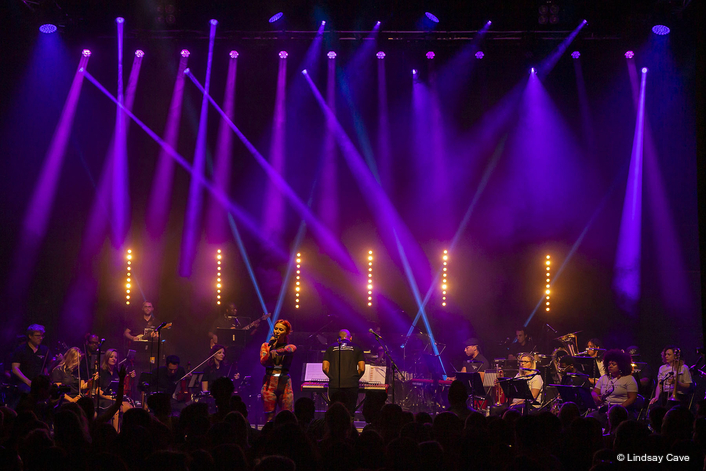 They also dovetailed the extras and specials – for both lighting and sound – with the venue’s available house production kit, and liaised with all the crew and creatives involved to ensure The House & Garage Orchestra enjoyed a flawless, relaxed and comfortable production environment in which to stage a highly acclaimed, show-stopping performance.

Audio
Production wise, this show was approached differently from previous THGO gigs. The usual format is around 15 people on stage, but, the numbers - with guests - tripled for this gig!

Kevin wanted to use the Allen & Heath dLive S7000 as they were an ideal interface with the A&H individual ME-1 monitor systems used for most of the musicians. Apart from that, it is “one of the best sounding desks I’ve ever used” he explains. 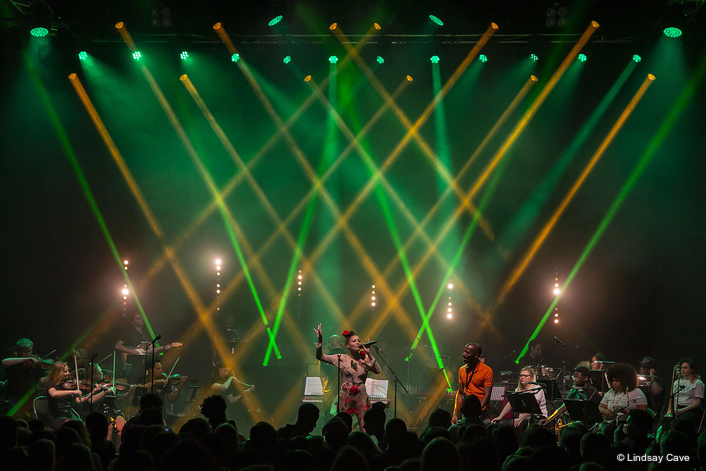 The FOH console was connected via two DM64 stage boxes on splits and FOH engineer Kieran Edmonds used a selection of additional Lexicon outboards for specific effects.
The project entailed a lot of mics as part of the equip package, of which the vocal ones were KSM8 capsules running on a Shure wireless system.

Both equip and THGO decided early in the planning to use the Empire’s in-house equipment, which for sound is an all EAW speaker system utilising a mix of KF850 main hang speakers plus a combination of SB850s and SB1000s for the low end. It is a good, solid all-round spec that works unilaterally well in the space for a diversity of artists and productions.

Mixing over 40 inputs from stage prompted Kieran and Kevin to choose the desks with which they felt most comfortable, and Kieran comments that the dLive S7000 workflow is “in a different league right now” … and he will be sticking to it for the rest of the year.

Kevin decided to use a network of Allen & Heath ME-U and ME-1 A&H personal mixing systems for some sections of the orchestra, mainly so brass and strings could each have individual control of their own personal monitor mixes via their Shure IEMs.

It was key to ensure that the orchestra was happy with what they were hearing in terms of IEM mixes, and the ME-1 solution is “fast, easy and intuitive” explained Kevin, who sent 30 channels including a selection of stereo stems, individual channels for brass and strings and talk-backs down the multicore. 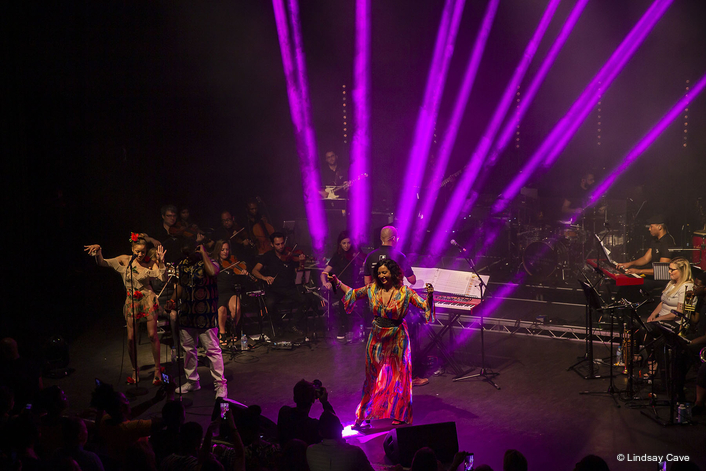 The rest of the band including MD / conductor Benjamin Burrell and some of the vocalists ran on Sennheiser IEMs, which were strategically combined with equip’s d&b M4 wedges for THGO’s vocalists, DJ / THGO producer Alex Mercier and the monitor engineer foldback.

All the mics were supplied by equip as per the rider with DPA 4099s for each of the strings and Beyer Dynamic M88s for the brass. Percussion and drums featured mainly AKGs and Shures, with KSM8s for the vocals … which Kevin loves for their flat response and overall good sound.

The brain of the monitor system was similar to FOH – an S7000 with a DM64 stagebox. There were 64 inputs, 11 IEMs for vocalists, technical mixes and Benjamin Burrell, 5 x Shure P9HW wired belt-packs for the band and 14 x ME-1s for the string and brass sections. Kevin mixed for the band, vocalists, conductor and techs, and sent out stems and individual channels to the ME-1s for the string and brass sections. 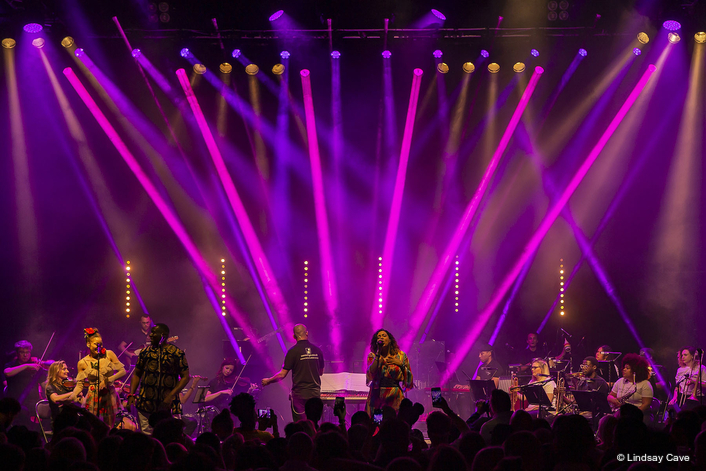 For Kieran the biggest challenge of mixing THGO shows is always in attaining Benjamin Burrell’s aural vision and fine balance between the original iconic music and their new orchestrated versions … and getting that across to everyone in the room.

With a lot of people on stage, a high channel count, and an extremely ebullient and excited audience who have grown up with house and garage music, each with a memory from at least one of these tunes, “it’s crucial I don’t lose the vibe of the music! This isn’t the proms; people expect a rave and that’s exactly what they get!” 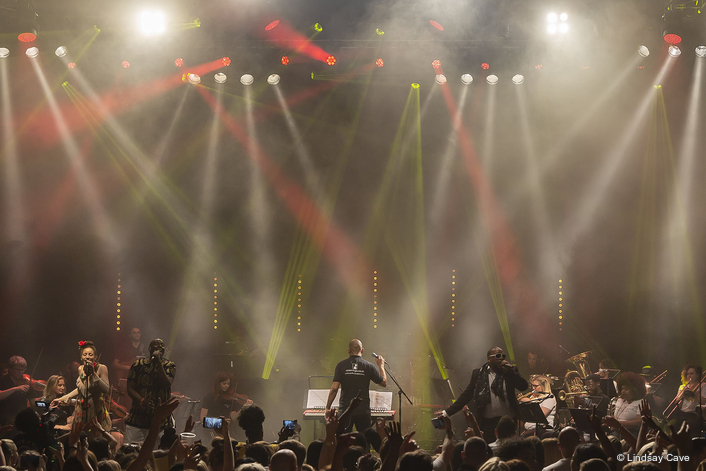 The upshot of this was that Nick used the comprehensive house rig comprising Robe MegaPointes, LEDBeam 150s and LEDWash 600s in the overhead rig, together with ACLs plus ETC Source Four Revolutions for key and front light.

equip supplied active Sunstrips as extras which were on tank traps and positioned upstage on the floor and used to break-up the black upstage cloth and add depth to the overall lighting picture. The floor package also featured 8 x Chauvet Hybrids.

These well thought-through extras enabled him to connect the space between the overhead rig and the deck with luminance and to bring a symmetry to the stage, and also establish a tight balance between the top and floor lighting whilst offering a whole range of additional effects and vibrancy.

It was important for Nick to be able to immerse the audience in the lighting as well as vibe with the energy coming offstage from THGO and their guest artists. This results in a dynamic all-embracing clubby ambience with some spectacular visual highlights to emphasise the artist’s physical movements and the band’s rich, fluid and highly rhythmic groove.

Nick spec’d an Avolites Tiger Touch II console for control which was supplied by equip. He’s always been an Avo fan, especially for this style of one-off programming and operation. The desk fitted the spec perfectly, also giving access to all the venue’s ArtNet nodes for running standard data connections to stage for the floor fixtures.

“I thoroughly enjoyed working with THGO again, and with the all of the technical team involved for this show” stated Nick.

Perfect Prep
Kevin Jianoran worked closely with James and the equip crew preparing the kit in advance, so they would have as stress free a day as possible on site.  Also instrumental in ensuring the whole operation run smoothly and seamlessly were equip’s warehouse manager Sheldon Saunders and technical manager Neil Drewitt.

Dan says “it’s always a pleasure working with Kevin. His technical knowledge and attention to detail give us the headspace to concentrate on our job.  We hit it off from the start with THGO. It was great having Ishmael and the production team visit equip’s offices to discuss the gig in detail and preview the kit. Their performance was brilliant and the response from the crowd said it all.  Working with the band was great fun and we’re very much looking forward to the tour.”